With the merger with US Airways, the “new American is arriving” with a very diverse and sizable combined fleet. Here, we take a look at American Airlines’ plans for 2015.

Airbus A319: American will add seven additional A319 aircraft to the fleet this year.  Four will be delivered in the first quarter and three will be delivered in the second quarter.  All of the new deliveries will be equipped with CFM engines and Sharklets. This bring the total number of A319s in the fleet to 125.  The ex-U.S. Airways A319s will continue to be painted. 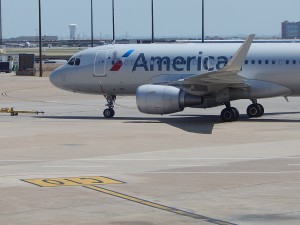 An American A319 at DFW | Photo provided by Ryan Ewing

Airbus A321: A total of 35 A321s will be added to the fleet in 2015.  Ten aircraft will be delivered in the first quarter as well as the second quarter.  11 additional aircraft will join the fleet in the third quarter of 2015.  Of those 35 A321s, 23 of them will be two-class aircraft ordered by American.  Those will all join the fleet with the new American interior and Sharklets.  The remaining 12 will be from the US Airways order.  These aircraft will all be equipped with IAE engines.  The U.S. Airways aicraft will not have Sharklets and will feature the US Airways interior with no power on entertainment besides Wi-Fi.  Between American and U.S. airways, there are still orders for more than 60 A321s CEOs as well as 100 A321 NEOs. All of the U.S. Airways A321s will be re-painted in the new colors. 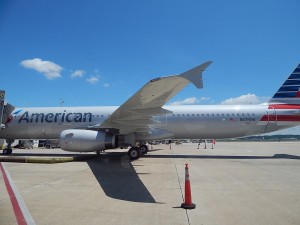 Airbus A330-200:  The U.S. Airways fleet of 15 Airbus A330-200s will remain mostly unchanged with one exception.  As mentioned in our podcast, a truck ran into the nose of N288AY in Charlotte on January 2nd.  The aircraft sustained substantial damage.  Currently, plans are to repair this aircraft and return it to service.  These plans may end up changing and the aircraft may end up being scrapped if the repair costs too much.  Other than this, no changes are planned.  Once the two airlines are fully integrated, it would not be surprising to see Main Cabin Extra seats added to the A330 fleet.  This is not in the plans as of yet.  Many of the A330-200s have been re-painted already and the rest should be flying in the new American livery by year’s end.

Airbus A330-300: The same as above goes for the U.S. Airways fleet of nine Airbus A330-300s.  Main Cabin Extra is a good possibility in the future.  Part of the A330 fleet will likely be shifted to American’s hubs such as Chicago, New York, and Miami for trans-Atlantic flights. This will not take place until father down the road when the airlines are fully integrated and cross-fleeting is widespread.  All of the A330-300s are already painted in the new colors

Boeing 737-800: American’s 737-800 fleet continues to grow.  This year, a total of 18 737-800s will be added to the fleet bringing the total number of 737-800s in the fleet to 264.  American is the fourth largest operator of the Boeing 737 Next Generation series.  After this year, only 42 orders for the 737-800 will remain.  American plans to operate a toal of 306 737-800s by the time the order is complete.  All of the orders going forward will be delivered with power in every seat as well as a personal TV and the Boeing Sky Interior (BSI).  It appears unlikely that previous 737-800 deliveries will be outfitted with the new interiors as some of the aircraft are approaching 20 years of flying.  American also has an order for 100 737-800MAX.  For now, painting of the 737-800 fleet is on hold with the exception of new deliveries.  It appears likely that at some point the entire 737-800 fleet will be wearing the new colors. 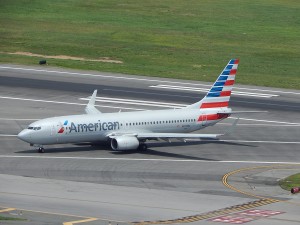 Boeing 757-200: The 757 fleet of American will shrink significantly in size this year.  37 757s will be retired this year bringing the fleet down to 69 aircraft.  The A321s continue to replace these aging 757s.  The 757 retirements will match the A321 deliveries in the first two quarters will 10 being retired in both the first and second quarter . 14 757s will be retired in the second quarter and three more will leave the fleet in the fourth quarter.  No further interior modifications are planned on the 757.  All of the international configured 757 aircraft will be painted in the new colors as well as at least a portion of the U.S. Airways fleet of 757s. 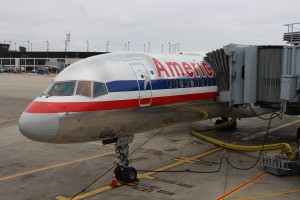 An American 757 at ORD | Photo provided by Ryan Ewing

Boeing 767-200: The end of the Boeing 767-200 is near in the U.S. Airways fleet.  The last scheduled 767-200 flight will be on Febraury 11th.  All five remaining aircraft are planned to be retired and returned to the lessor after that date.  The American 767-200s were all retired in the first half of last year.  Some of the U.S. Airways 767-200s were from the original USAir and some were from the original Piedmont Airlines.  These aircraft likely will never fly for an airline again due to their age, unlike some of their American counterparts which were converted into cargo aircraft.

Boeing 767-300:  The 767-300 fleet is split into two types of aircraft.  The 30 aircraft that will receive Main Cabin Extra seating as well as new business class seats will stick around in the fleet for a while.  The other 18 aircraft will begin to exit the fleet as the new 787s get delievered.  American is scheduled to retire nine 767-300s this year including one each in both of the first and second quarters and then seven more in the third quarter.  By the end of the year, 49 767-300s will remain.  38 of the 58 767-300s have received the new paint. No additional 767-300s will receive the new paint. 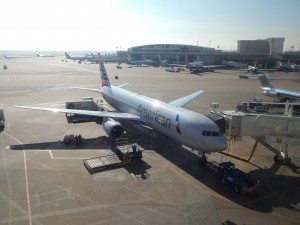 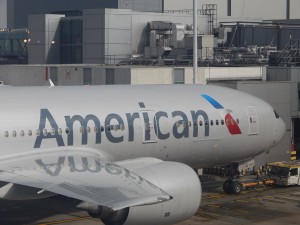 Boeing 777-300ER: The order that American placed for 20 777-300ERs is nearly fulfilled. One aircraft was already delivered in January and one more will be delivered in the fourth quarter bringing the total number of 777-300ERs to 18 with two more on order.  These aircraft are currently deployed to just three international destinations: Hong Kong, São Paulo, and Hong Kong.  As expected, all 777-300ERs are wearing the new livery.

Boeing 787: The details of American’s 787 have been kept a secret for a while now.  Despite recently flying home their first 787, American still has yet to release any further information regarding the interior or the routes it will fly.  There have been a few pictures of the interior that have been circling around.  From the looks of those pictures it appears as if the seats are the same seats that are used in the 777-300ER and the new 777-200. It is also speculated that American will fly their 787 between Dallas and Chicago for six weeks as a trial run.  The first crew base will either be in Dallas or Chicago as well.  It is also rumored that American’s Chicago to Tokyo route will change to the 787 no later than October.  American’s first several 787s will be the smallest variant, the -8.  Two more will be delivered in the first quarter while nine more will be delivered in the last three quarters of the year, three in each quarter.  American has a total of 46 787s on order, 16 for the -8 variant and 26 for the larger -9 variant. 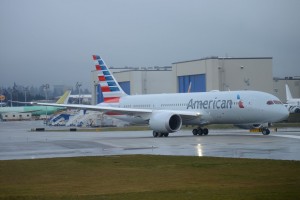 McDonnell Douglas MD-82/83: It is well known that the MD-80 fleet is on its way out.  The MD-80s are being replaced by 737s and A319s for the most part.  This year, 43 MD-80s will exit the fleet, seven in the first quarter, 23 in the second quarter, and 13 in the third quarter.  With fuel prices so low, some of them may be kept around longer for the summer season so this number may decrease.  If the planned 43 aircraft are retired, 96 MD-80s will be left in the fleet at year’s end.  None of the MD-80s will be repainted fully despite some of the nose cones being in the new colors.

CRJ-200:  Between Air Wisconsin, ExpressJet, Mesa Airlines, PSA Airlines, and Skywest Airlines a total of 138 CRJ-200s are flying for American Eagle.  No changes are planned for the CRJ-200 fleet this year.  A chunk of the CRJ-200s have been repainted and many more are likely to also receive new American colors.

CRJ-700: A total of 61 CRJ-700s are flying in the American Eagle fleet.  Currently, a majority of them are flown by Envoy.  Envoy will transfer all of these CRJ-700s to PSA  Airlines which will then fly all 61. The transfer is expected to begin sometime in the middle of this year.  Only one CRJ-700 remains in the old US Airways colors and all of the Envoy CRJ 700s have been repainted into the new livery.

Bombardier Dash 8-100:  Piedmont will continue to operate 29 Dash 8-100s.  Many of them have been repainted and the rest of them will get the new colors as well.  One will be retired this year in the first quarter bringing the year end total to 28.

Bombardier Dash 8-300:  Piedmont also operates 11 Dash 8-300s.  All of these have been repainted in the new American Eagle colors now.

Embraer E140: The E140s are being phased out of the fleet quickly.  21 E140s will be retired this year including 11 in the first quarter, five in the second quarter, four in the third quarter, and one in the fourth quarter.  There will be 13 E140s left by the end of 2015. These aircraft are all operated by Envoy

Embraer E145: Envoy has a large fleet of E145s.  The 118 aircraft fleet of these will all remain in service for American Eagle through the end of this year.

Embraer E170: Republic Airways will continue to operate a fleet of 20 E-170 aircraft.  Many of them have already been repainted.  The aircraft that have not been repainted yet will be shortly.

Embraer E175:  The E175s have exploded on to the scene for American Eagle lately and there are plenty more to come.  By year’s end, there will be 109 Embraer E175s operating for American Eagle.  29 of those will be delivered this year including seven in the first quarter, four in the second quarter, nine in the third quarter, and nine more in the fourth quarter.  Republic will be the main operator of these aircraft.  The other two operators of the E175 will be new this year.  Both Compass Airlines and Envoy have orders for E175s.  Envoy has 40 E175s on order while Compass has 20 on order.  Compass will take their first delivery of the E175 in March.  They will fly the San Francisco-Los Angeles route at first.

For more than 60 years, Lufthansa has had a tradition of naming its aircraft after German cities, but only less…