Delta MD-88 Slides Off the Runway at LGA

A Delta aircraft slid off runway 13 late Thursday morning at New York’s LaGuardia Airport. Delta flight 1086, an MD-88 from Atlanta registered as N909DL, touched down at LaGuardia at 11 a.m. The weather at LaGuardia was not particularly favorable with snow, freezing fog, and approximately a quarter-mile of visibility. After the MD-80 touched down, the wheels never gained traction which resulted in the plane skidding down the runway. About 5,000 feet down the runway the plane veered left off the runway, into the snow and coming to rest just feet from the frozen Flushing Bay.It hit a berm which is designed to stop aircrafts.

Flight 1086 left Atlanta at 9 a.m. for snowy New York City. About 3 inches of snow had fallen in New York by 11 a.m. In addition to snow, there were reports of sleet and freezing fog in the area around the time of the incident. In addition to slippery runway conditions, the visibility at the airport was reported to be a quarter-mile at the time of the crash. In a press conference after the accident, Port Authority Executive Director, Patrick Foye, said that the two airplanes that arrived on Runway 13 before Delta 1086 landed smoothly, with pilots reporting good braking action. Also Foye added that Runway 13 was plowed shortly before flight 1086 landed.

There were 127 passengers and 5 crew members onboard. After the planes stopped, passengers had to climb out of the MD-88 via the wing exits as the emergency slides were not deployed. Initial reports are that there were 24 non-life threatening injuries and 3 people were transported to the hospital for precautionary measures. There were no serious injuries resulting from the accident.

Reports from passengers on Delta flight 1086 was that the landing was very bumpy and that the aircraft wasn’t slowing down properly and then it began veering off the runway to the left. There is about 100-150 feet between Runway 13/31 and Flushing Bay. At the very edge of the airfield near the runway, there is a berm with a fence on top of it to keep out flood waters and other objects from entering the airfield. Other passengers report seeing the left wing take out about 1000 feet of the fencing with their left wing before turning 90 degrees where they finally came to rest on the top of the berm with the nose overhanging the water. After coming to rest, passengers and firefighters reported a fuel leak coming from the left wing of the MD-88, presumably from coming in contact with the fence. Firefighters quickly stopped the leak and put foam over the fuel that was on the ground to prevent a fire from igniting. Passengers were then let off the airplane and bused to the terminal. 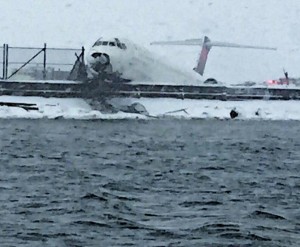 N909DL rests on the berm (Photo via NYPD Special Ops)

After the accident, LaGuardia (LGA) was closed sending all arriving aircraft to other airports around the area. Both runways were closed until 2 p.m. EST when one runway was reopened and very limited operations were in affect. At this time, the NTSB is on scene investigating.

Below, you can hear the air traffic control begin making contact with flight 1086 after it crashed at LGA. We recommend beginning the audio at 3:40. Audio via LiveATC.net.