First Scheduled Flight to Cuba in 50 Years Takes Off

August 31st, 2016 will go down as a historic day for relations increased between the United States and Cuba. For the first time in 50 years, scheduled flights between the United States and the Caribbean island took off. The honor for the first flights in 50 years went to jetBlue who held a celebration this morning at their Ft. Lauderdale hub. The flight to Santa Clara, Cuba departed on time at 9:45am and was completely full.

The flights came with a “thawing” of the frozen relationship between the United States and Cuba. Previously, the relations between the two countries had restricted flights to only charter flights filled with either Cuban immigrants who are visiting home or those with special visas. Early this year, relations thawed and it was announced that limited service to Cuba would resume later in the year. Due to a high demand for flights to Cuba, the Department of Transport required airlines to bid on routes they wished to operate. Additionally, the Cuban government placed a slot restriction on the number of flights on certain routes.

jetBlue was one of eight airlines awarded flights to Cuba, with others such as Silver Airways, American Airlines, and Alaska Airlines, to name a few. Today’s flight was a 50 minute hop to the central City of Santa Clara. The check-in area for jetBlue at Terminal 3 was decorated with balloons and signs for the new Cuban service. At the gate, a much larger setup was in place place with Cuban food and drinks available for passengers. A podium was also set up for speakers to inaugurate the event.

About an hour and a half before scheduled departure, speakers began the inauguration of this historic route. In attendance was the station manager for jetBlue in Ft. Lauderdale, the mayor of Broward County, jetBlue CEO Robin Hayes, the CEO of The Broward County Aviation Department, and the Cuban Ambassador. The general theme for the event was hope and optimism. Hope that this historic day would help to further improve relations between the United States and Cuba; optimism that this flight would signal the beginning of bright futures for both jetBlue and Cuba. 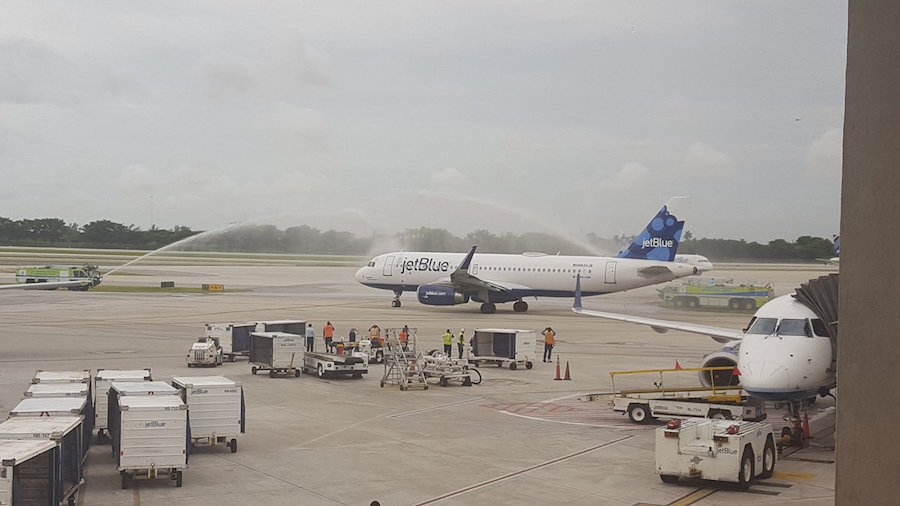 A water canon salute for the first scheduled flight to Cuba in 50 years (Photo: Daniel Morley)

While taxiing, the airport fire department gave the A320 a water canon salute to commemorate the new service. A few minutes later the fully loaded A320 rocked into the sky towards a bright new future.