A Bombardier C Series on the ground in Atlanta (Photo: AirlineGeeks | Alex Navitsky)

On Monday, two aircraft manufacturing giants, Airbus SE and Bombardier Inc., announced their partnership to manufacture and sell Bombardier’s newest line of aircraft, the C Series. This is the first partnership on a new aircraft program between European-based Airbus and Canadian-based Bombardier, as airlines are rushing to acquire new small, fuel-efficient and single-aisle jets.

Under the partnership, Airbus will hold a majority share of 50.01 percent in the C Series Aircraft Limited Partnership (CSALP), the Bombardier subsidiary charged with the manufacture and sales of the new aircraft.

“Airbus is the perfect partner for us, Québec and Canada. Their global scale, strong customer relationships and operational expertise are key ingredients for unleashing the full value of the C Series. This partnership should more than double the value of the C Series programme and ensures our remarkable game-changing aircraft realizes its full potential,” said Alain Bellemare, President and Chief Executive Officer of Bombardier Inc. 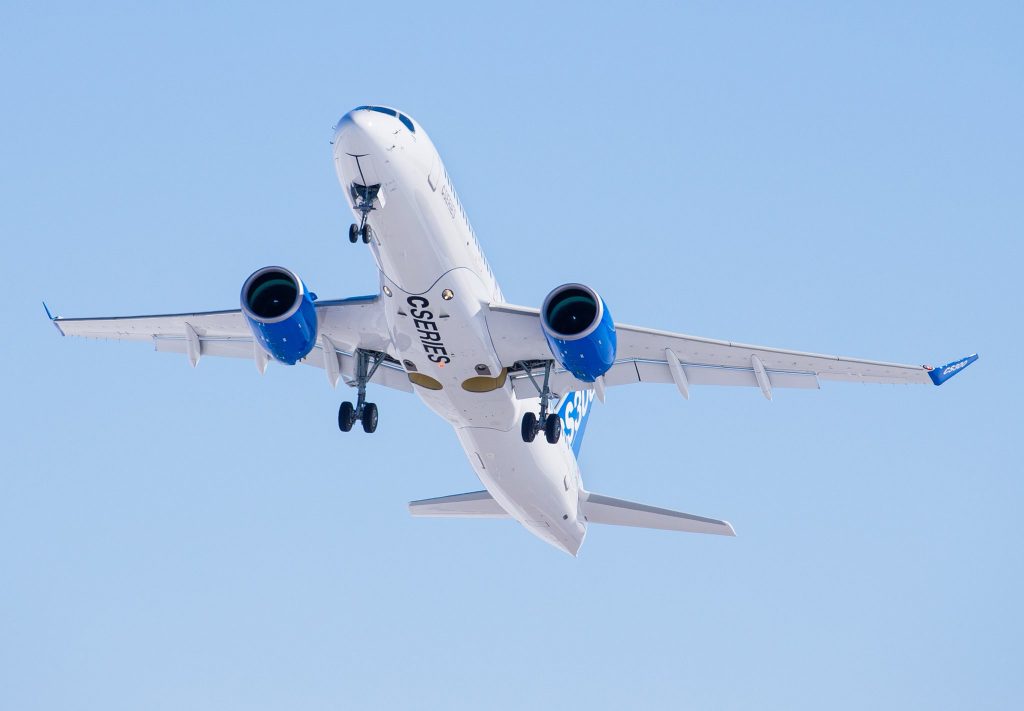 Airbus, citing its already established supply chains and “global reach and scale,” aims to assist Bombardier by supporting the sales and marketing of the aircraft, as well as negotiating and improving agreements with the partnerships’ suppliers.

Airbus will name four members to the CSALP Board of Directors, Bombardier will name two, and Investissement Quebec will name one, with Airbus also naming the CSALP Chairman of the Board.

The Toulouse-based company also believes that the agreement will bring increased jobs to all parties involved. The company has factories in countries such as France, Germany, Spain, China, and the U.S., where Airbus operates a factory for its A320 family aircraft in Mobile, Ala.

The move comes just weeks after Bombardier and Boeing were embroiled in an international trade dispute that had Boeing filing a complaint against Bombardier for violating World Trade Organization (WTO) rules against trading goods produced using government subsidies.

In regards to the new deal between Airbus and Bombardier, Boeing issued the following statement:

The dispute, beginning with Delta Air Lines placing an order for the new C Series aircraft, ended with the United States putting a 219 percent tariff on the Canadian aircraft. The tariff on the aircraft’s importation to the U.S. is in an effort to combat the alleged subsidies that Bombardier received from the Canadian government, a violation of WTO international trade rules.

Airbus’ involvement with the C Series aircraft program may be a way for Bombardier to appease the United States, after the botched deal with Delta, by bringing more jobs to Airbus’ Mobile factory in Alabama. With the United States Government focused on bringing jobs back to its manufacturing industry, the partnership may also be a win for the U.S.

The partnership also highlights a key blind spot of both Airbus and Boeing with the need for smaller aircraft. While aircraft manufacturing giants Airbus and Boeing compete to build aircraft bigger and better, with the Airbus A380 and Boeing 747-8 being the most recent examples, they are forgetting about a highly profitable sector of the market; the regional jet market.

Airbus Chief Executive Officer Tom Enders said, “This is a win-win for everybody! The C Series, with its state-of-the-art design and great economics, is a great fit with our existing single-aisle aircraft family and rapidly extends our product offering into a fast-growing market sector. I have no doubt that our partnership with Bombardier will boost sales and the value of this programme tremendously.”

Airbus’ investment in the C Series is a sign that the company is adapting to the market by aiming to build smaller aircraft, in addition to the long-haul giants and short-haul workhorses that it currently manufactures.