The Story of Kansas City International Airport: An Inside Look

Built in 1972, Kansas City International Airport was designed to be one of the easiest airports to fly in or out of, for both pilot and passenger. Formerly known as Kansas City Mid-Continent International Airport, the facility, located in Kansas City, Missouri, was once a fan favorite. For pilots, the airport’s website boasts its “uncongested air and ground space, short taxi time, and low weather-related closure/cancellation rate.” 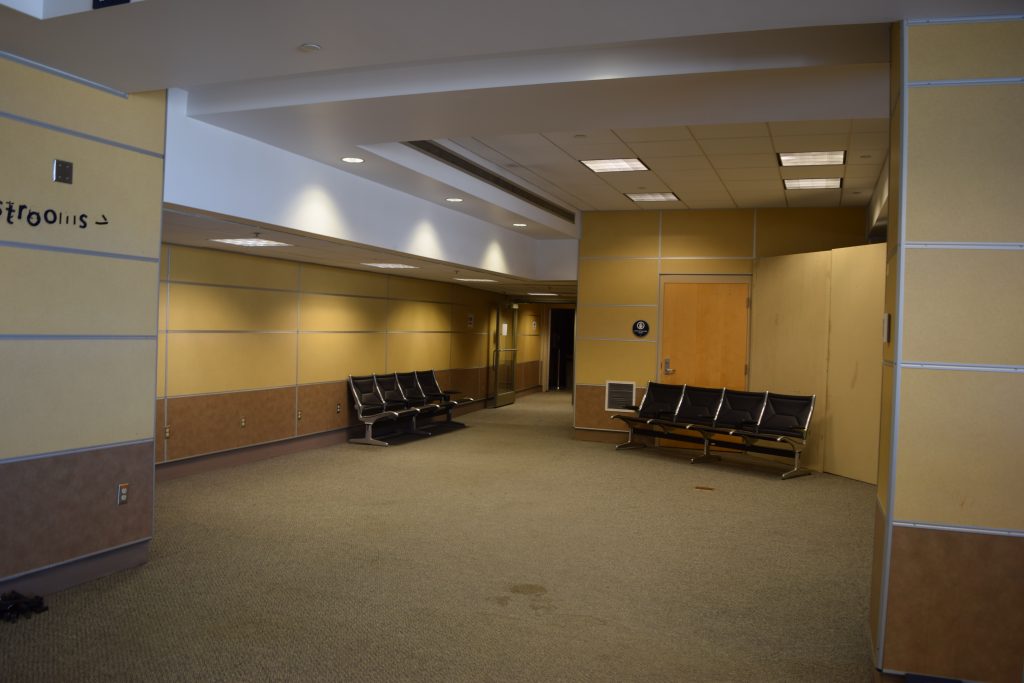 An empty hallway leading to the restrooms (Photo: Giselle Bergmeier)

For passengers, the terminals were designed to be small and easy to navigate. Before the safety precautions put in place after 9/11, passengers and their loved ones would simply walk through the front doors of the terminal and be at their gate.

Stores and restaurants line the front portion of the building, creating more room for travelers to stare out the large windows that lead to the tarmac. Underground tunnels double as parking garage access routes and storm shelters. Getting around MCI, affectionately referred to as such due to its airport code MCI, was a breeze compared to larger airports such as Dallas/Fort-Worth or New York’s John F. Kennedy.

The History of Kansas City International

MCI’s simplicity was initially designed for Trans World Airlines, often shorted to TWA. The airline wanted to make sure the passenger experience could be delivered as simply as possible. TWA applied heavy pressure on the city to build a terminal that allowed passengers to “drive to your gate.” It was the plan that would allow for the perfect hub in the perfect central US location. However, TWA’s opinion of MCI quickly changed.

When airline deregulation took effect in 1978, it dealt a large blow to airline operations in Kansas City. TWA, along with many other airlines, left the airport due to its poor design and lack of passengers. Security screening was also added shortly after the terminal was open, restricting the space in the already small terminal. The building size and the low passenger count were not enough to keep TWA in Kansas City.  The airline gave the city council two options: build new, larger terminals, or the airline would leave. 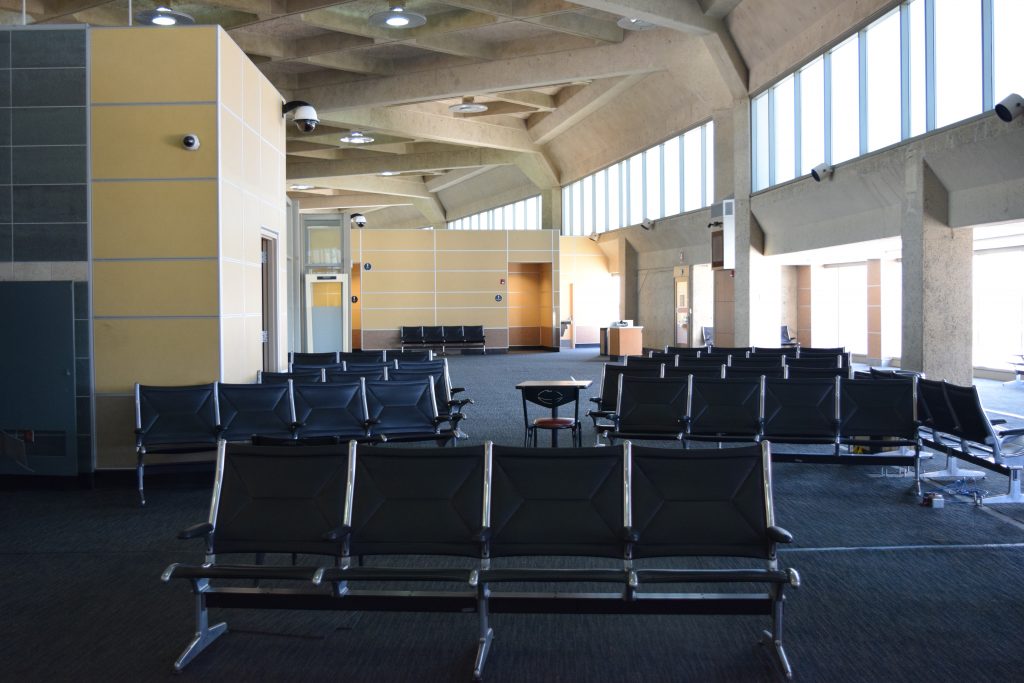 Seats are scattered around the gate area. (Photo: Giselle Bergmeier)

After only recently completing the original terminals, the city refused to build new terminals to fit the airline’s demands. TWA responded by leaving Kansas City, moving across the state to St. Louis, Missouri.

Over the years, Terminal A began to loose Airlines due to consolidation and mergers. By the year 2000, the airport saw a limited amount of airlines ranging from Southwest, US Airways, United, AirTran, and more. 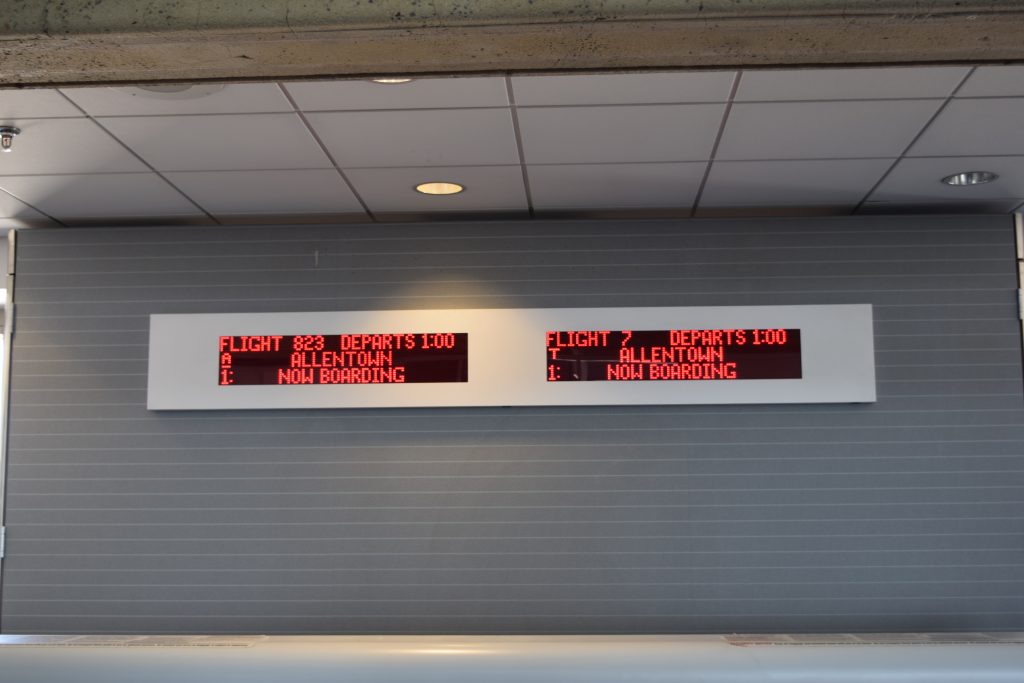 Then, one the worst days in the United States history occurred: September 11, 2001.

The mass increase of security measures at airports across the world resulted in families having to wave goodbye to their loved ones through a security wall, guarded by TSA agents. This, specifically, made things interesting in the case of Kansas City. New, taller, secure walls were put in place, causing the small terminal to become even narrower than before. 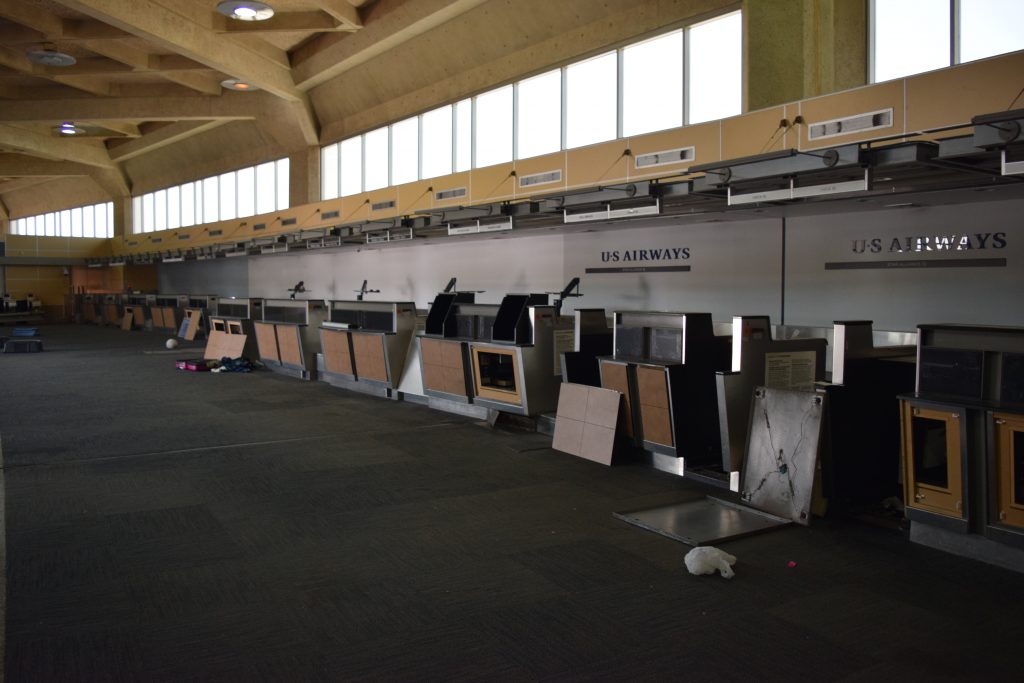 The remains of a US Airways ticket counter (Photo: Giselle Bergmeier)

In addition to security concerns, MCI faced another large issue. Airlines began to disappear from the airport due to consolidation and mergers, causing Kansas City to have an excess of uninhabited gates. In 2014, airport officials made the decision that Terminal A was no longer profitable, due to a small number of daily flights, and the terminal was closed overnight.

And just like that, the terminal was empty. Operations were either moved to Terminals B and C or ceased altogether. To this day, nearly four years later, the terminal looks the same as the day it closed. 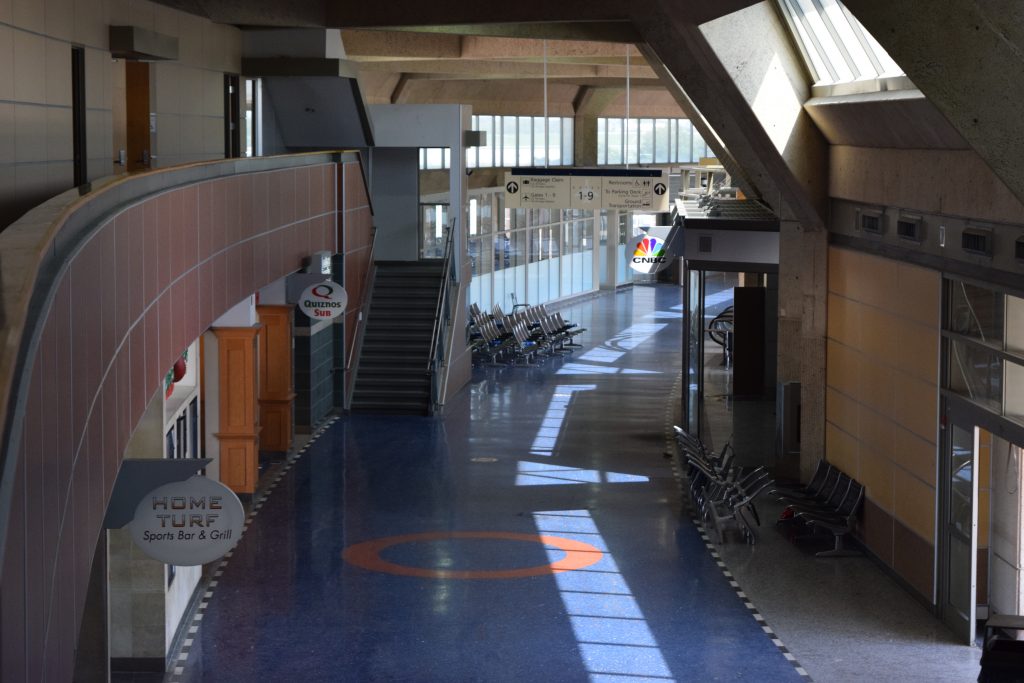 The unsecured area of Terminal A (Photo: Giselle Bergmeier)

My Tour of Terminal A

I was fortunate enough to secure a tour of Terminal A with a great tour guide, MCI’s Senior Manager of Marketing and Communications, Joe McBride.

We started at Gate 1 of the horseshoe-shaped terminal and walked through the eerie fortress. With some minor touch-ups, the terminal could have opened to passengers the next day. The majority of the terminal’s guts were still there: chairs, tables, shop contents, office supplies and even luggage.

It was all there. The lights were on, the building was still temperature-controlled at a nice 73 degrees, and the secure access doors were still armed.

As we made our journey through the forgotten terminal, Mr. McBride explained the building is still used for various things. Cyber-security commercials have been filmed inside and the annual Pull-A-Plane charity event is held on the terminal’s ramp area. The one I was most interested in was police and K9 training, as local and airport police use Terminal A for hostage and bomb training. 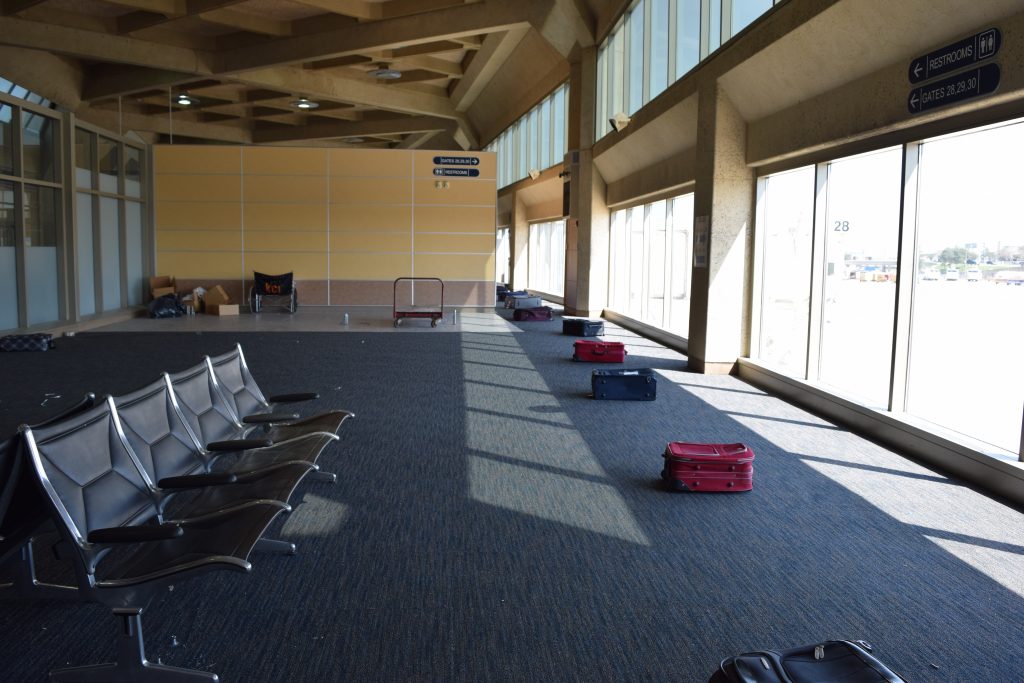 Multiple scenarios are run in the terminal, ranging from an active shooter to a bomb situation.  The Transportation Safety Administration (TSA) provides unclaimed passenger luggage to stage the terminal for K9 training. Agents place foreign and illegal objects in the suitcases to train their K9 units to detect the items.

Everything had looked forgotten until we reached gate 14 when we passed a single standing security scanner, as well as a working bathroom. The bathroom lights were on and the sink faucet was left open with water gushing down the drain.

As I walked around the corner, the urinals automatic flushing sensor picked up my movement. My heart skipped a beat, as I didn’t expect the sensor to pick me up from seven feet away.

After reporting the running bathroom water to maintenance, McBride explained that gate 14 is still used for military charters and NFL’s Kansas City Chiefs team charters, so everything around that area must be functional.

We left gate 14 and continued the tour. We made stops in offices once occupied by the former airline and TSA staff. Most of the furniture was gone, but papers, supplies, and office phones were all there, all accompanied by mounds of dust. 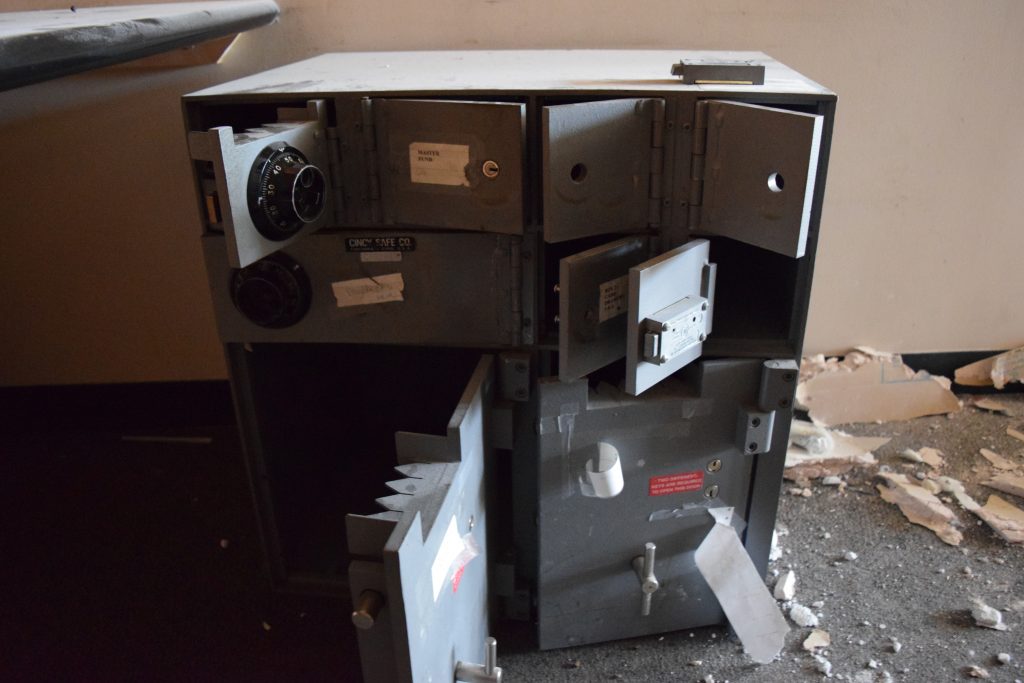 A money safe was destroyed in an airline office (Photo: Giselle Bergmeier)

Boxes of TSA cards alerting passengers their bag was checked, unused boarding passes, and what looked to be baby hospital gowns, were stacked everywhere. In one room, the blinds were torn down and newspapers were laid out across the floor. It truly looked post-apocalyptical.

Future Plans for the Airport

The future of MCI’s forgotten Terminal A remains unknown. The current proposal is to demolish Terminal A and build a larger, more modernized terminal in its place. Developers AECOM, Burns & McDonnell, Jones Lang LaSalle, and Edgemoor Infrastructure and Real Estate had all pitched ideas for the $1 billion project on Aug. 14, 2017.

There has also been a growing influence on social media, demanding that an updated airport be built that is more efficient for passengers.

Edgemoor Infrastructure and Real Estate was selected for the modernization project on Sept. 6, 2017 by a city council selection committee and city staffers. The recommendation still needs to pass the city council.

Another long-term solution, however, calls to keep the structure and possibly reopen it once the traffic calls for it. However, the size and age of the structure could cause issues with this option. 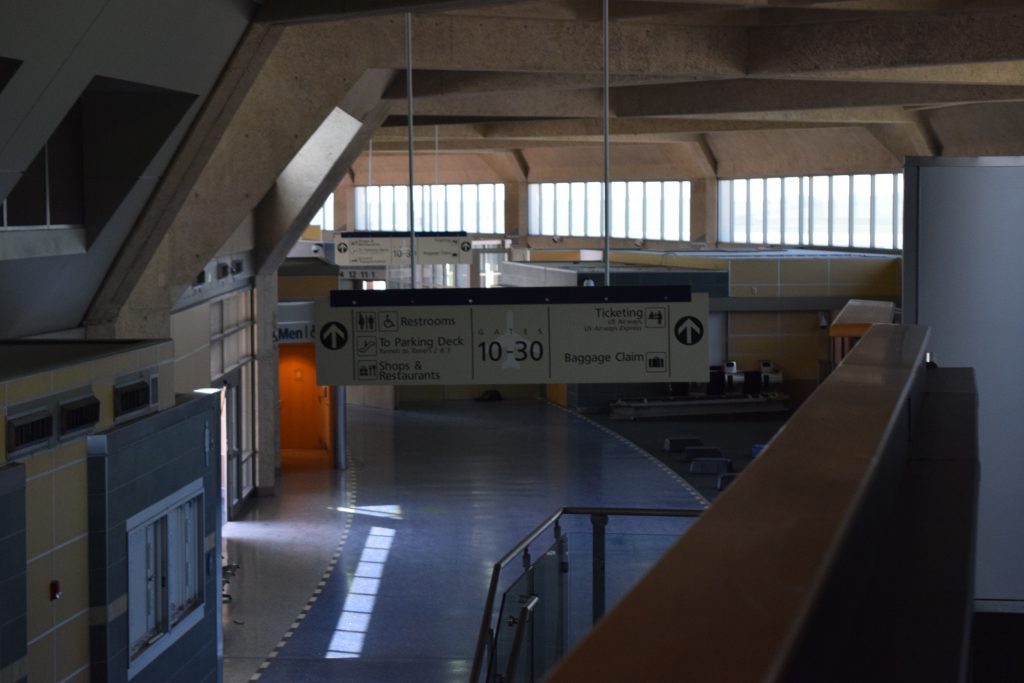 The unsecured area of Terminal A (Photo: Giselle Bergmeier)

There is no set fate for the old terminal, however, voting for a new terminal will take place on Nov. 7. For now, it shall sit abandoned with the only signs of life being the occasional movie crews, military charters, the Chiefs football team, and the lost driver circling the dilapidated road which borders the building.

Security screening was added prior to 9/11. Security walls were upgraded to have higher walls and included more gates in each hold post 9/11.

Airlines left the terminal due to consolidation and mergers. When the terminal closed, the remaining operations were moved to terminals B and C.

Voting for the new terminal will take place on Nov. 7. If the new structure is not passed, the long-term solution will be to reopen Terminal A once the need for it arises.