The Next Best Option: What is Hawaiian Airlines’ Boeing 717 Replacement?

While the narrowbody market tends to show the overarching use that the Airbus A320 and Boeing 737 can bring to an airline, there are some narrowbody holes that are slowly being exposed as older model aircraft age. One example is the Boeing 757, whose versatility has proven that no one aircraft can replace it. Another much less common one is the Hawaiian Airlines inter-island fleet of Boeing 717s, which are starting to show age with the airline claiming there is no true replacement on the market.

The Boeing 717s were originally purchased in the 1990s and brought in to replace the Douglas DC-9 fleet that the airline had operated since 1979. The first aircraft was received in Hawaii in 2001 with the airline taking delivery of 18 aircraft in the years following. But while the Boeing 717 was important to Hawaiian, the aircraft failed to sell well overall with only 156 being made in its eight-year production life.

With the Boeing 717 production ending in 2006 and showing no signs of a return, Hawaiian will at some point have to turn to looking at newer aircraft types to replace the current inter-island fleet. However, the airline’s next five years and the surrounding aviation market will play a huge role in what Hawaiian strategies are.

As Southwest starts to plan inter-island service to Hawaii, any change in the market could see the airline either upgradeor downgauge the aircraft that they use depending on the market. Should Southwest fail and Hawaii continues to see increasing demand, the airline could upgrade its fleet to the Boeing 737-7 MAX, which in its less dense formation could see as little as 138 seats. If the opposite occurs and Hawaiian needs to downgauge, the airline could turn to a smaller aircraft such as a Bombardier CRJ-1000 or Embraer E190-E2.

But currently, the best one-to-one replacement that is on the market is the Bombardier C-Series, which is soon to start U.S. service with Delta. Delta’s trial run with the C-Series could sway Hawaiian, with Delta using the C-Series to replace much older MD-80s in hopes of turning a larger profit as fuel prices continue to climb. Statically, when compared to the Boeing 717, the C-Series currently offers as many as 13 more seats and an increased range by 1000 miles.

This change in mileage may not seem important for inter-island travel but for Hawaiian, it could be huge. The airline currently performs heavy maintenance on the 717s in Oakland, California which is 2,300 miles from Hawaii. With the 717s range of 2,090 miles the aircraft must be retrofitted with extra fuel tanks to make the journey to the U.S. mainland. But with the C-Series, this change would no longer be necessary since the range on the C-Series is 3,100 miles. 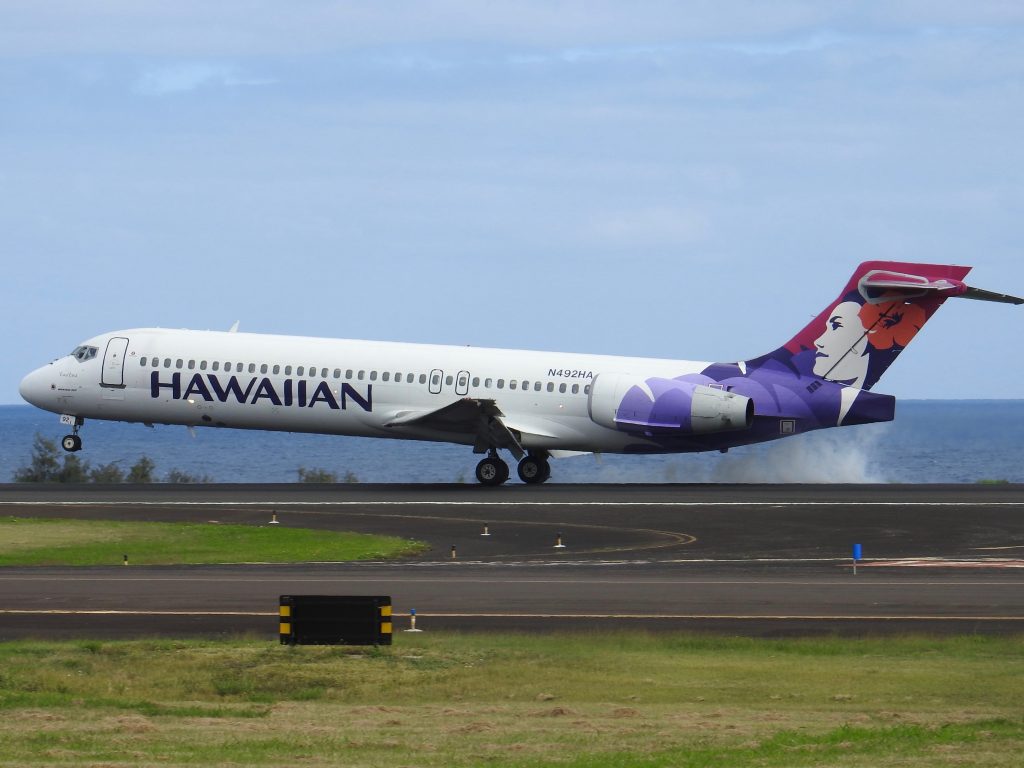 In the short term Hawaiian plans to remain committed to using the Boeing 717 with the carrier overhauling the fleet with new cabin interiors and adopting a uniform seating arrangement of 8 first and 120 economy seats in 2015. The airline has also expanded the fleet to 20 while also replacing older Boeing 717 models that have hit high cycle counts with ex-Mexicana and ex-Volotea models that have been delivered in 2012 and again in 2017.

The carrier also plans to continue the trend of replacing the Boeing 717 with other Boeing 717s as their current fleet hit their cycle limit. However, this could prove to be an issue for the airline as the current operators of the fleet type have no plans on removing them from the fleet, with some even looking to acquire extra Boeing 717s if possible due to the aircraft’s ability to serve smaller markets without regional jet use.

While a Boeing to Boeing replacement seems possible for the narrowbodies, Hawaiian has shown they are willing to expand outside of the United States in terms of looking for aircraft in recent years, breaking apart their all Boeing lineup of Boeing 767s and 717s that operated in the early 2000s with the newer fleet seeing the addition of the Airbus A330 and A321neo to service both Asia and America. The airline has also added the ATR 42 to its inter-island fleet, with the prop plane being used for smaller island or less popular routes.

While the future of Hawaiian’s inter-island fleet remains unchanged with the 717s being around for a while, the airline will someday have to look into replacing the jet. And while the DC-9 family Hawaiian has trusted for years has come to an end with the 717, the airline will now to find a new source for its short hops.