AirBaltic on Thursday celebrated the 30th anniversary of the Baltic Way, one of the world’s largest peaceful demonstrations that united the Baltic countries of Latvia, Estonia and Lithuania against the Soviet Union in 1989, with an event at its hub in Riga. In commemoration of the event which saw the Baltic people connected by a human link stretching over 300 miles, the airline brought together its three special-liveried Airbus A220-300 aircraft, each one painted with the flag of a Baltic county.

Following a ceremony held by the airline at Riga International Airport, large hangar doors opened to reveal the three special liveried AirBaltic Airbus A220’s representing the flags of Estonia, Latvia and Lithuania together at last. The aircraft parked together in front of the hangar provided the first-ever opportunity for the public to view these aircraft together. The patriotic crowd waving the flags of the three countries looked in awe of the colorful aircraft representing their respective homelands. 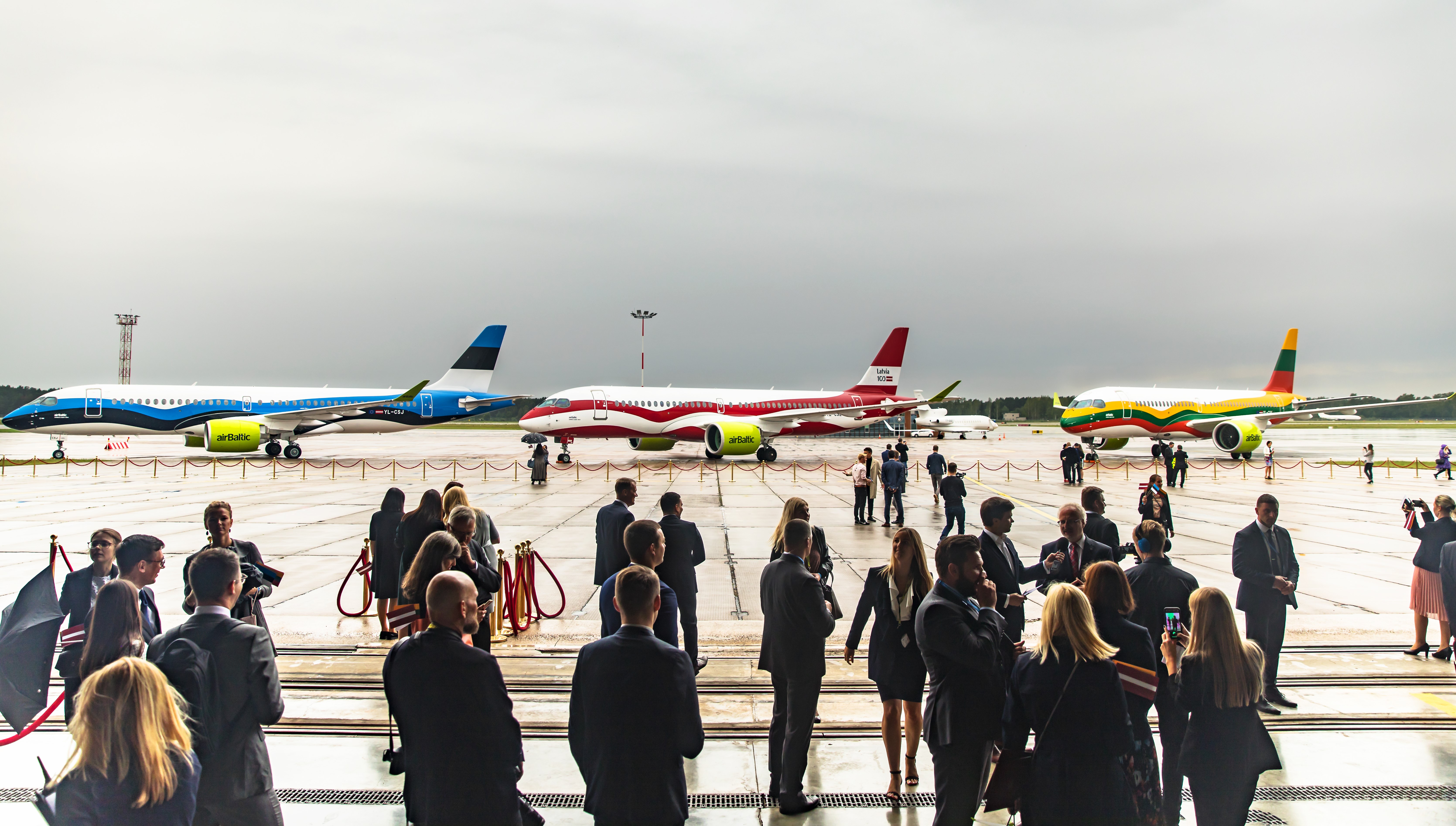 AirBaltic provided the first opportunity for its three special liveried Airbus A220s to be photographed together on the 30th anniversary of the Baltic Way demonstrations. (Photo: AirlineGeeks | William Derrickson)

“We are proud to host this event in honor of the Baltic Way – a unique, peaceful demonstration that showed the world how determined and unified the Baltic people were in regaining their freedom,” said Martin Gauss, AirBaltic’s chief executive officer. “Together with amazing partners, we have created a special series of liveries and a song to honor the anniversary of this historic event and demonstrate Baltic solidarity.”

Though officially AirBaltic is the flag carrier of Latvia with its headquarters and main base in the capital city of Riga, the airline maintains bases in the Estonian and Lithuanian capitals of Tallinn and Vilnius, respectively. The operation is similar to Scandinavian Airlines, a regional umbrella airline covering multiple countries. 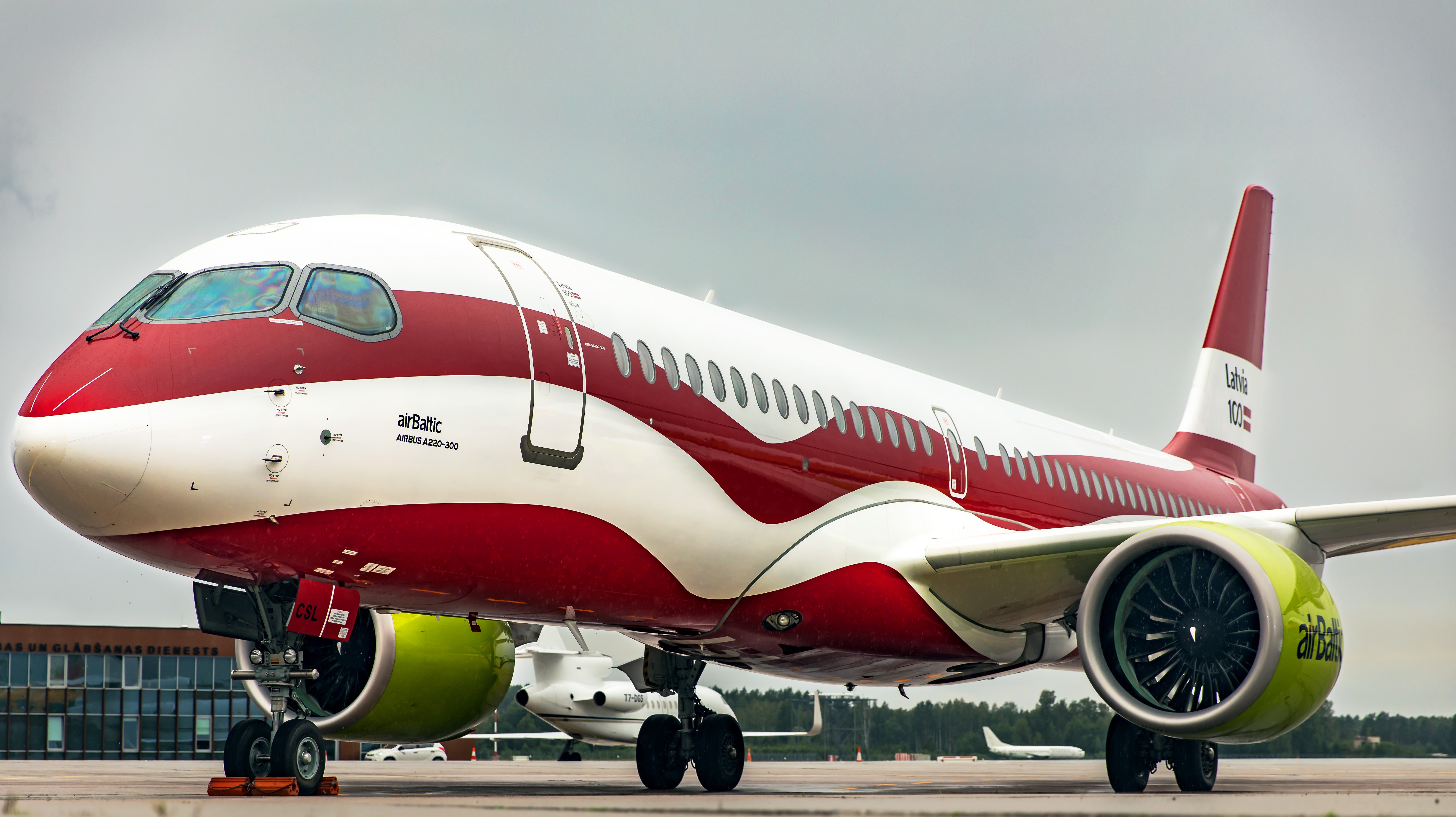 Though based in Riga, Latvia, AirBaltic is the primary carrier for the entire Baltic region consisting of Latvia, Lithuania and Estonia. (Photo: AirlineGeeks | William Derrickson)

The airline was an early adopter of the Airbus A220, serving as launch customer and first taking delivery of the aircraft when the program was fully owned by Bombardier as the CSeries. With 19 currently in service and order for additional aircraft, AirBaltic plans to replace its entire fleet with the next-generation aircraft in the near future, retiring its aging Boeing 737 fleet in the process.

“I extend my gratitude to AirBaltic for the beautiful and creative idea of ​​painting three new aircraft into the flag colors of Latvia, Estonia, and Lithuania, the national colors of our nations,” said Egils Levits, President of the Republic of Latvia.” AirBaltic reminds the world of the colors of our flags in a very special way. At every airport these airplanes will reach, their livery will be an opportunity to tell the story of our countries and our very special shared destiny.” 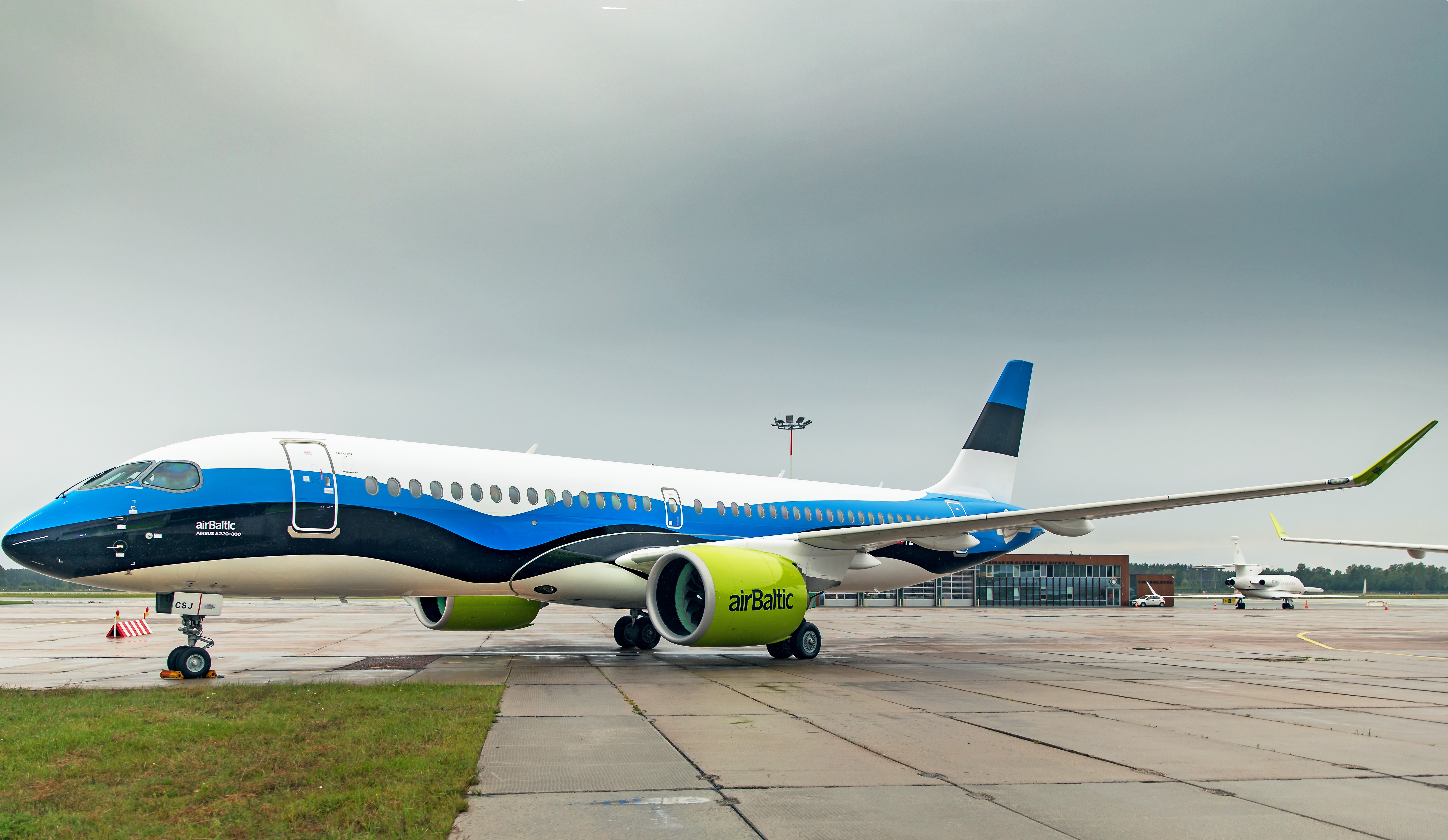 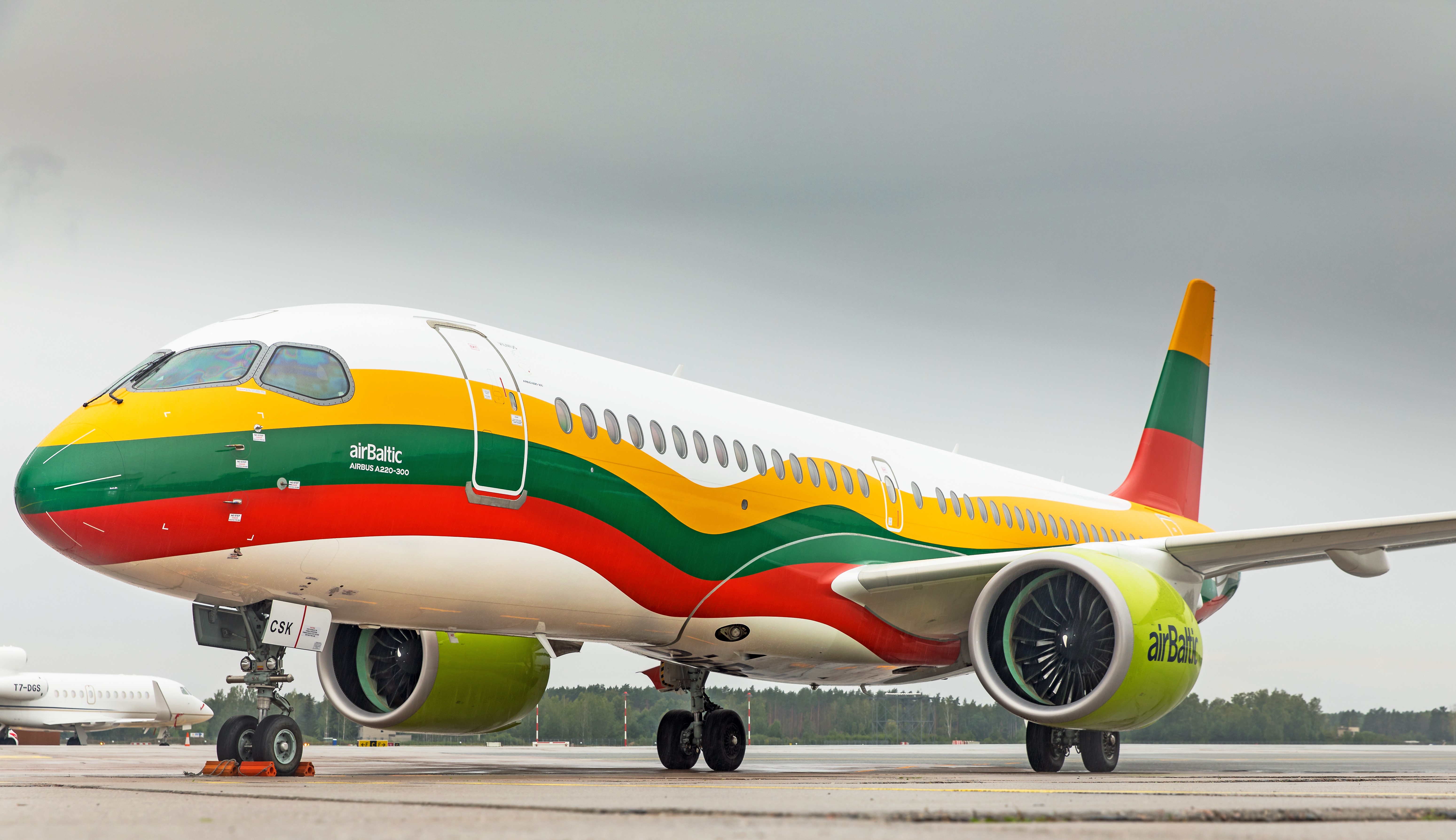 AirBaltic maintains a secondary base in the Lithuanian capital of Vilnius. (Photo: AirlineGeeks | William Derrickson)

The airline also enlisted Baltic musicians to compose a song in recognition of the demonstrations and in celebration of the region’s solidarity. The song encouraged the people of the Baltic nations to remember the yearning for freedom during the Baltic Way and pass it on to generations to come. Flag bearers for each respective Baltic nation were also on hand wearing the traditional clothing of their respective countries. 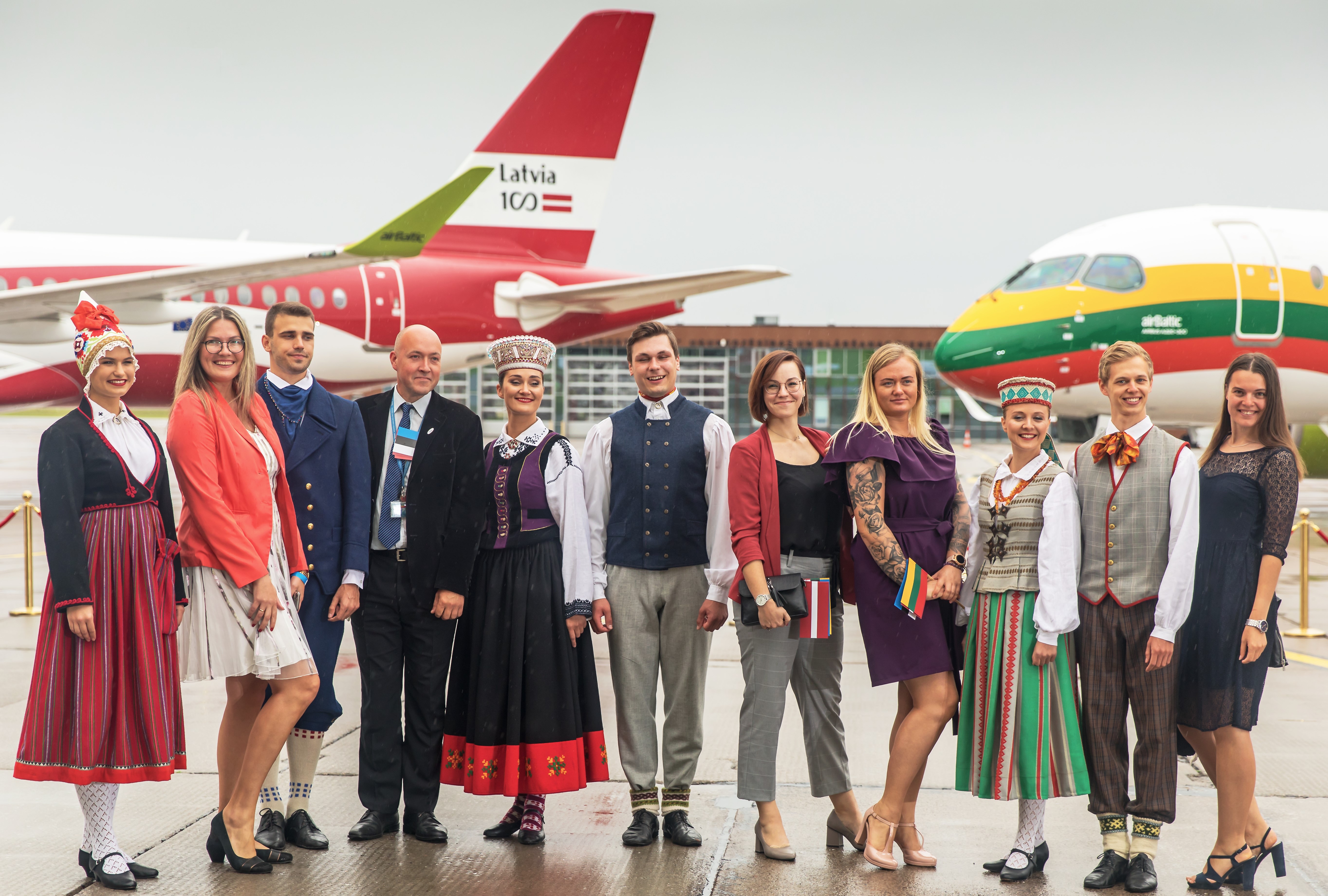 Gauss ended by sharing his excitement for the new Airbus A220 product, explaining the airline’s planned strategy for the aircraft. Maximizing its utilization rate, AirBaltic plans to fly the aircraft on regional routes by day and then stretch its legs as no other operator has done before by using it on long haul routes such Riga-Abu Dhabi, a journey of approximately 7 hours, by night.