Fiji Airways became the first airline in the South Pacific to operate the Airbus A350XWB on Friday when it took delivery of the first of two it has on order from the Airbus Delivery Centre in Toulouse, France. In taking delivery of the new aircraft, Fiji Airways is continuing its recent tradition of solely operating Airbus widebody aircraft on its long-haul routes.

Now with 12 aircraft in its fleet, the A350 is slated to complement the airline’s existing Airbus A330 fleet that serves scheduled destinations across three continents from Nadi.  After arriving at its new home base, Nadi International Airport, the aircraft will first serve existing routes in the Fiji Airways network including Nadi-Los Angeles and Sydney routes.

The aircraft will be a “game-changer” for the airline, according to CEO Andre Viljoen, and the country of Fiji, who’s economy is 50 percent driven by tourism.  Viljoen cited an upgraded product for his customers as well as reduced operating costs as key reasons why Fiji Airways chose the A350. 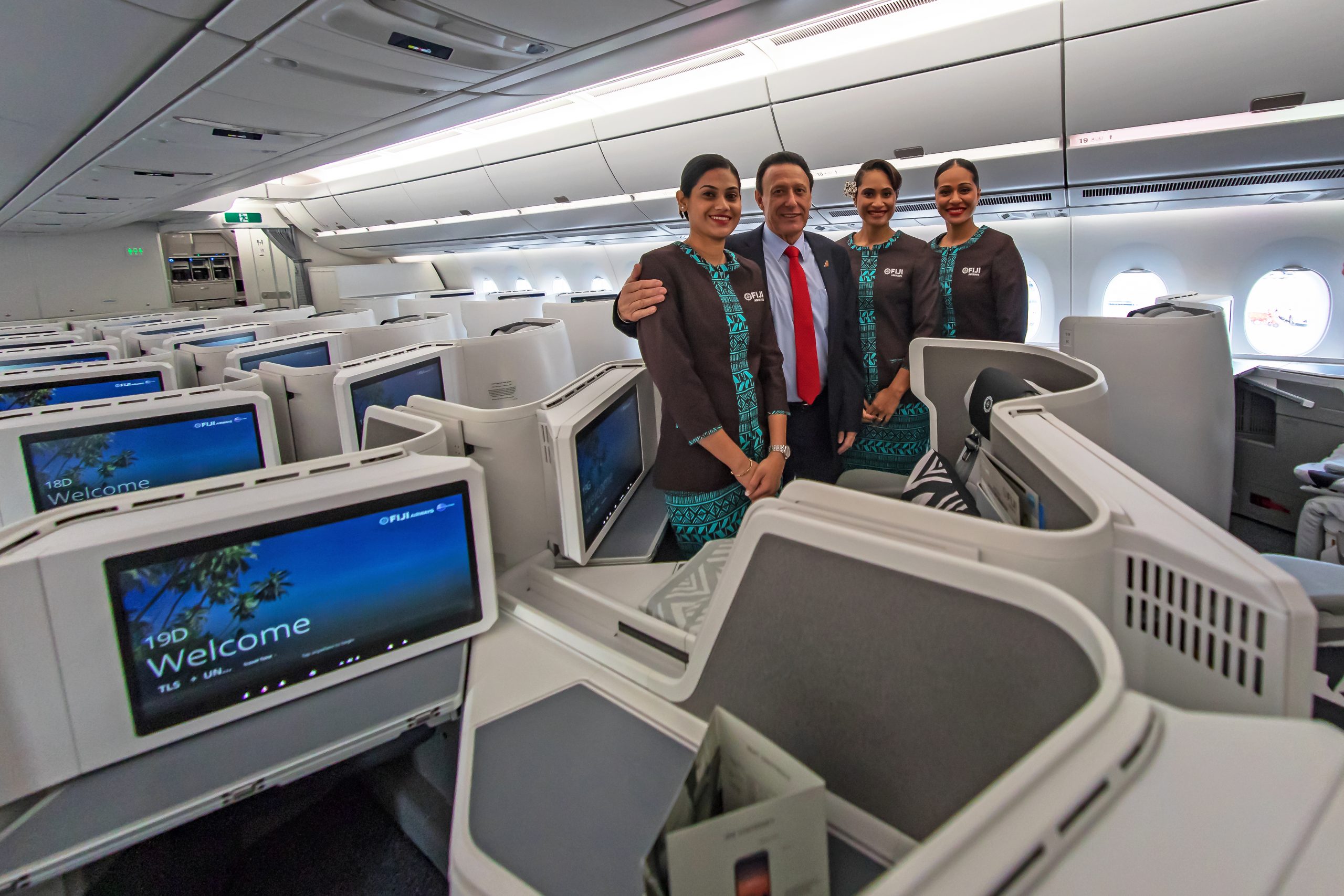 The airline considered 18 products including the A330-900neo before deciding the A350 was the perfect fit. Boeing was also a leading contender, according to The National, with its 787 Dreamliner aircraft. The switch to Boeing, however, would’ve required replacing the existing Airbus A330s, according to the article.

Viljoen sees an opportunity for growth with the new aircraft, especially in the United States where its efforts are solely focused on Hawaii and California.  He would like to see the A350 help Fiji Airways first increase frequency to twice daily on its existing service to Los Angeles and see the airline serving a new American destination within two to three years. 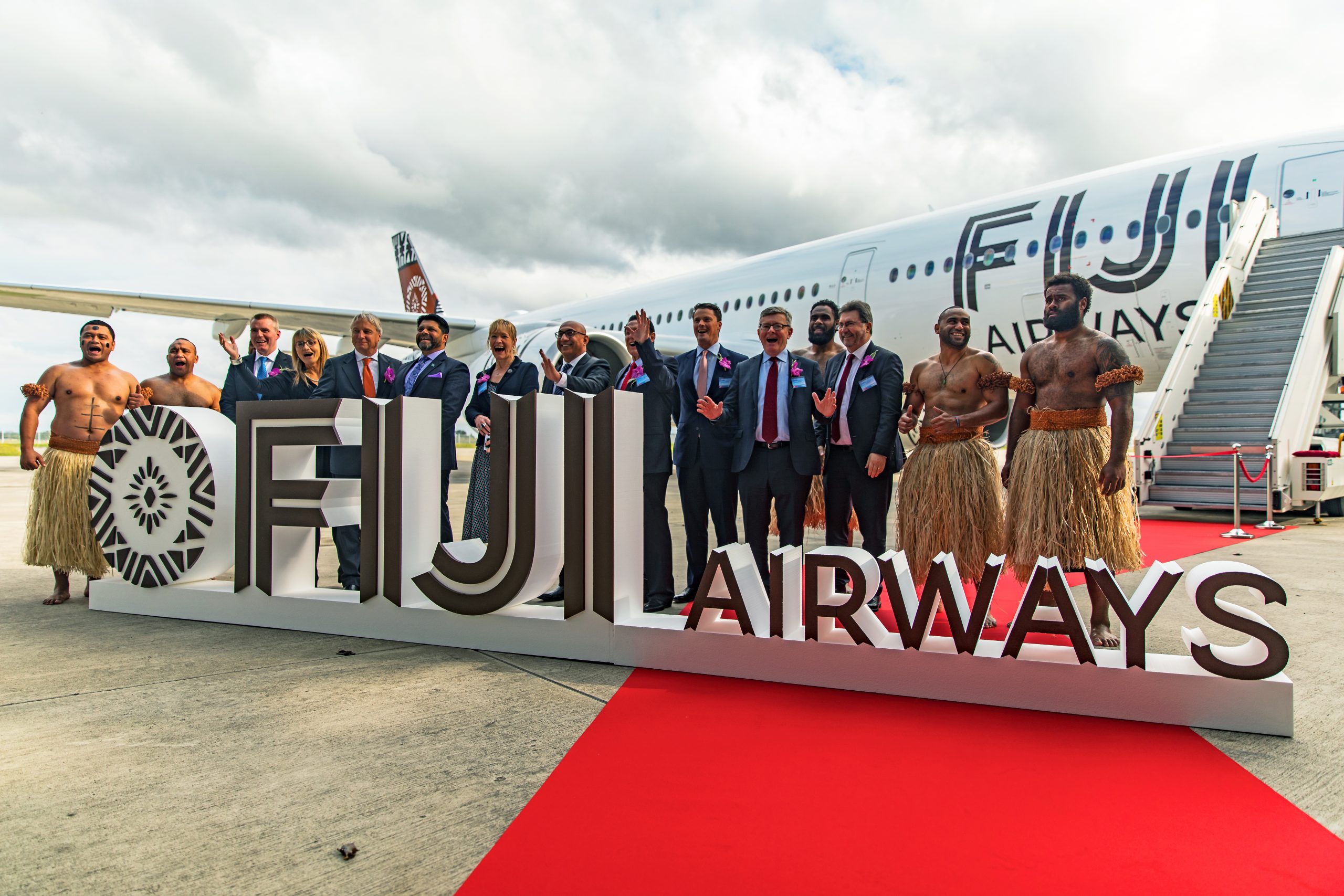 The arrival of the Airbus A350 opens the door to new opportunities for the Fijian national carrier. (Photo: AirlineGeeks | William Derrickson)

Also on hand at the delivery ceremony was Airbus Chief Commercial Officer Christian Scherer, who spoke about the excitement Airbus has for Fiji Airways introducing the A350 to the South Pacific region.  He stated the aircraft makes perfect sense for the isolated region as it is the only ultra-long-range, high-capacity aircraft in the world.

Scherer also touted the technological advances such as the use of composites and integration of the highly-efficient Rolls Royce XWB engines designed especially for the A350.  Airbus claims the aircraft will reduce operating costs by 25 percent and operators have been backing that statistic.

In response to a question posed by AirlineGeeks, Airbus stated current operators of the A350 including Singapore Airlines, Finnair and Qatar Airways have verified the aircraft’s efficiency and are happy with the results the A350 has delivered.

The order is also a win for Airbus who has been fiercely battling Boeing in Oceania. While winning over Fiji Airways and fellow South Pacific carrier Aircalin, the European manufacturer has lost to Boeing and its Dreamliner aircraft to airlines such as Air Tahiti Nui, Hawaiian Airlines and Air New Zealand.

Though only making a small order, Fiji Airways’ decision to adopt the A350 gives Airbus a foothold in the region and strengthens its ability to win over other carriers. The Fiji Airways model with its existing A330s and new A350s is a prime example of one of Airbus’ key selling points for the aircraft, interchangeability.

As the A330 and A350 share a common type rating, pilots can jump back and forth between aircraft without losing a beat. Despite different cockpit layouts, engines, configurations and other differences, Airbus has designed the A350 to handle similarly to its predecessor and Fiji Airways is one of the first airlines to adopt an all-A330/A350 fleet to take advantage of this. 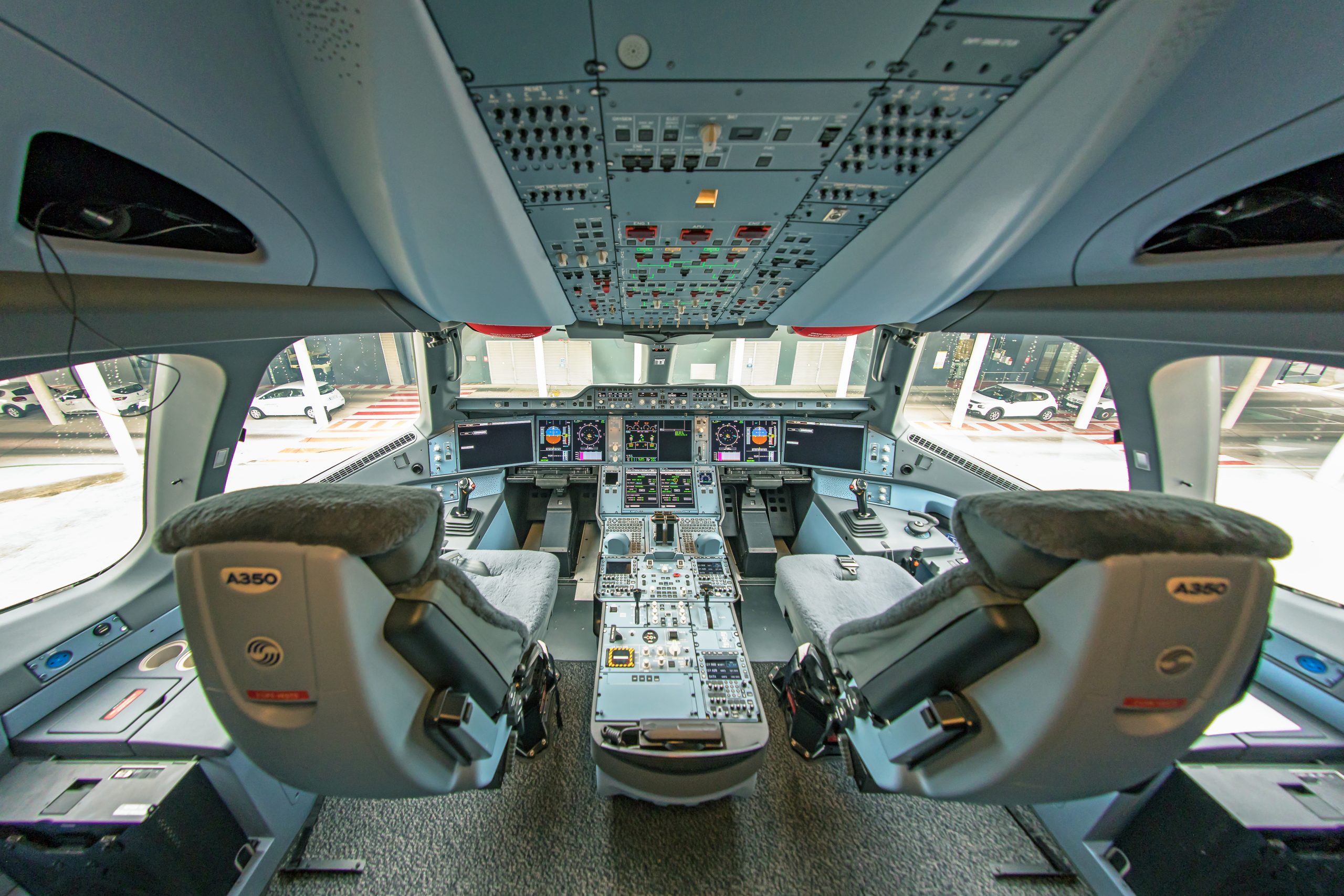 The highly-advanced cockpit of an Airbus A350. (Photo: AirlineGeeks | William Derrickson)

For a small airline such as Fiji Airways, the advantages of having two aircraft with similar characteristics include maximizing the use of its pilot pool, reducing training costs and increasing safety when switching between aircraft types.

Thanks to its increased length and width over the Airbus A330, the A350 will feature the largest cabin in Fiji Airways’ fleet and the largest amount of seats. Configured in a two-class cabin consisting of business economy class, the aircraft offers 331 seats, an increase of 18 seats from the A330-300 and 58 from the A330-200.

The largest upgrade on the aircraft will be in business class where 33 seats will make up the cabin. The reverse herringbone-style seats are an upgrade to the airline’s existing product on the A330s where the seats are paired and window seats do not have unobstructed aisle access, as well as the A330-200s still offering angle-flat seats. 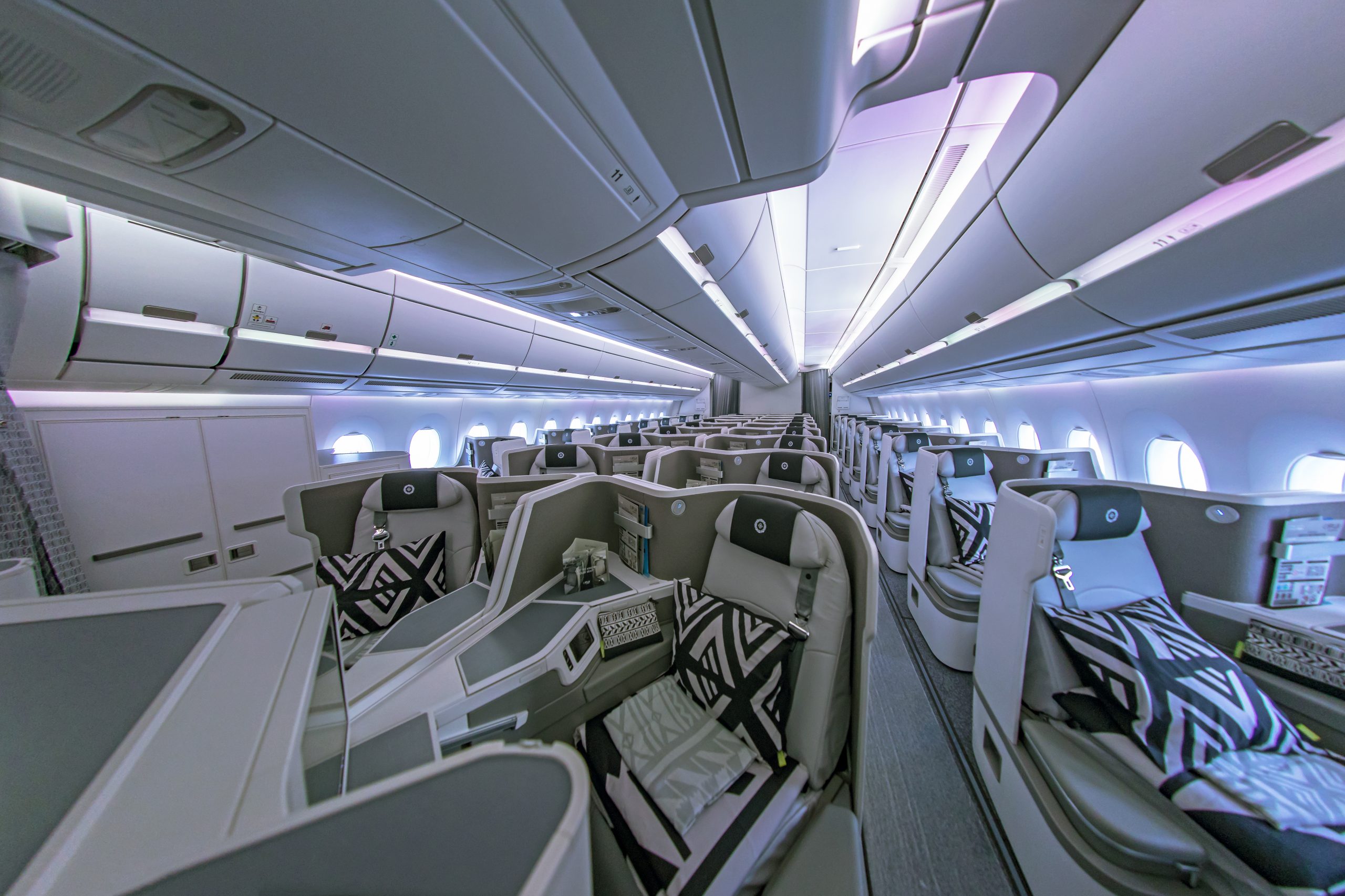 Arranged in a 1-2-1 configured, all business class seats will offer direct aisle access and lie-flat capabilities. The seats will also feature 22-inch width and 44-inch pitches when upright and an 80-inch bed length, according to Seat Guru. 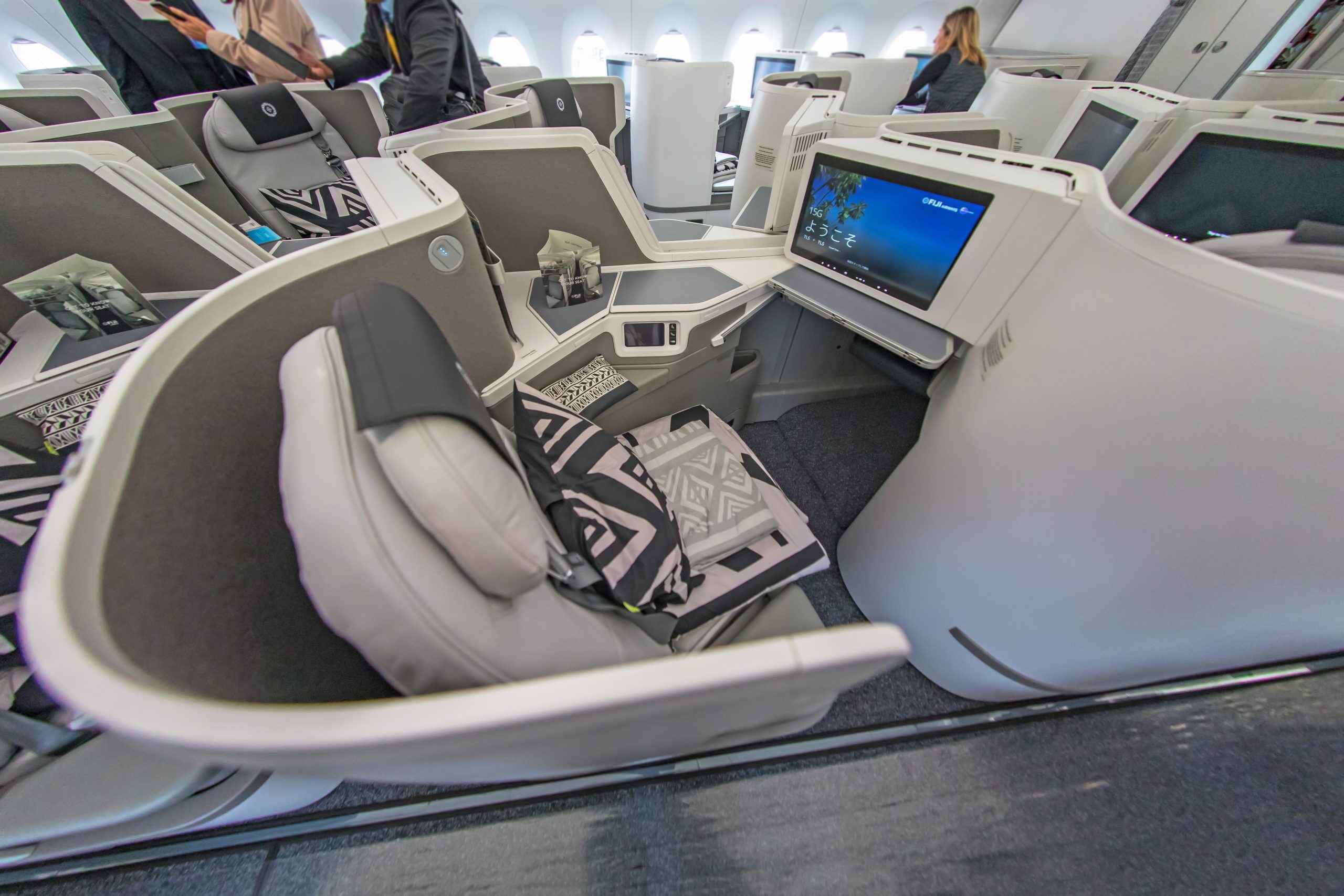 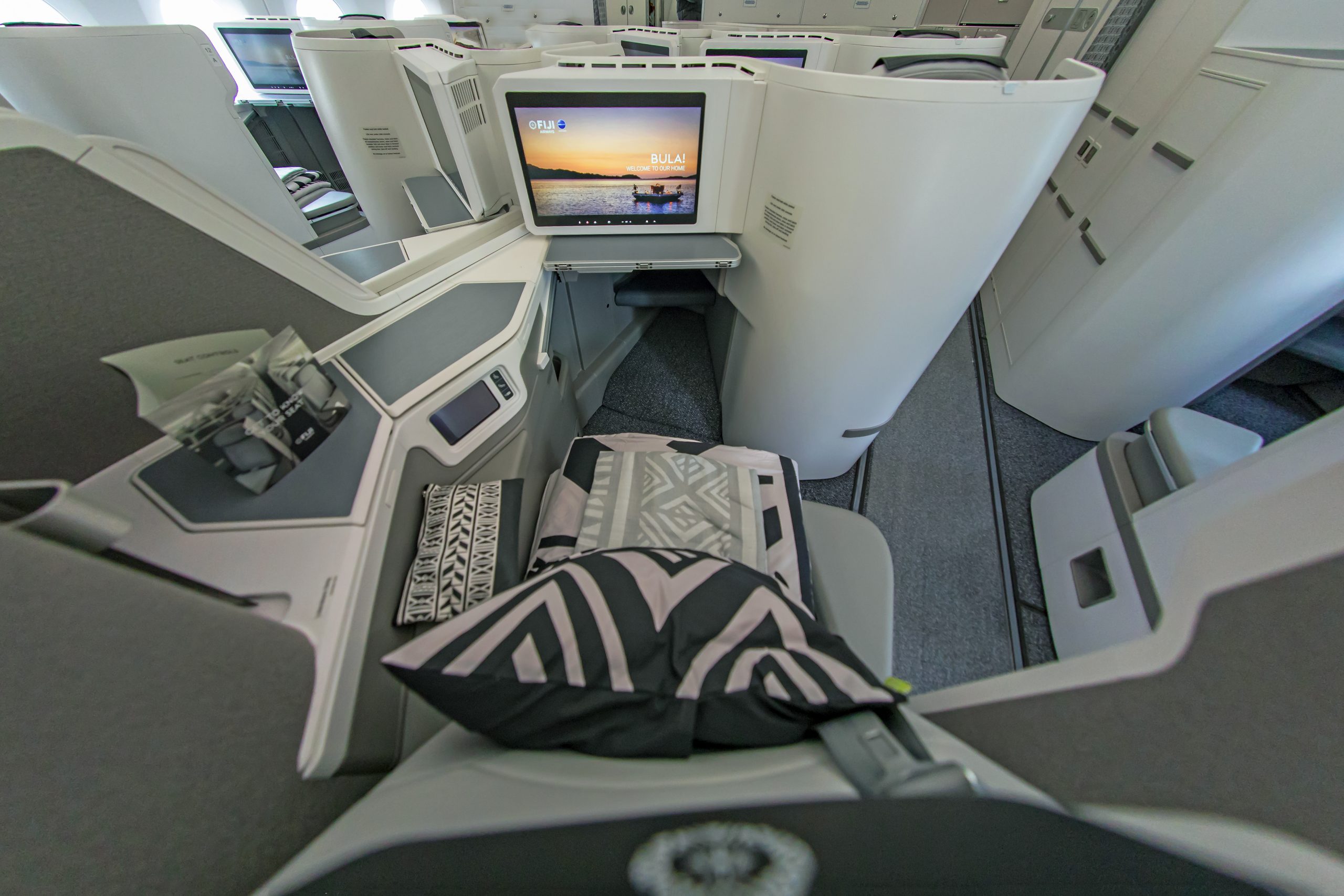 The grey and white seats are accompanied by pillows and blankets with Fijian designs on them. (Photo: AirlineGeeks | William Derrickson)

The cabin will feature light tones including white and grey, giving the cabin a truly modern feel. Pillows and blankets will feature Fijian designs to give the feeling of being in the country before even touching down.

While business class is the main centerpiece, the 301-seat economy class beginning in row 32 takes up the bulk of the aircraft. As opposed to the 2-4-2 configuration of the Airbus A330s, the A350 will feature the standard 3-3-3 configuration. 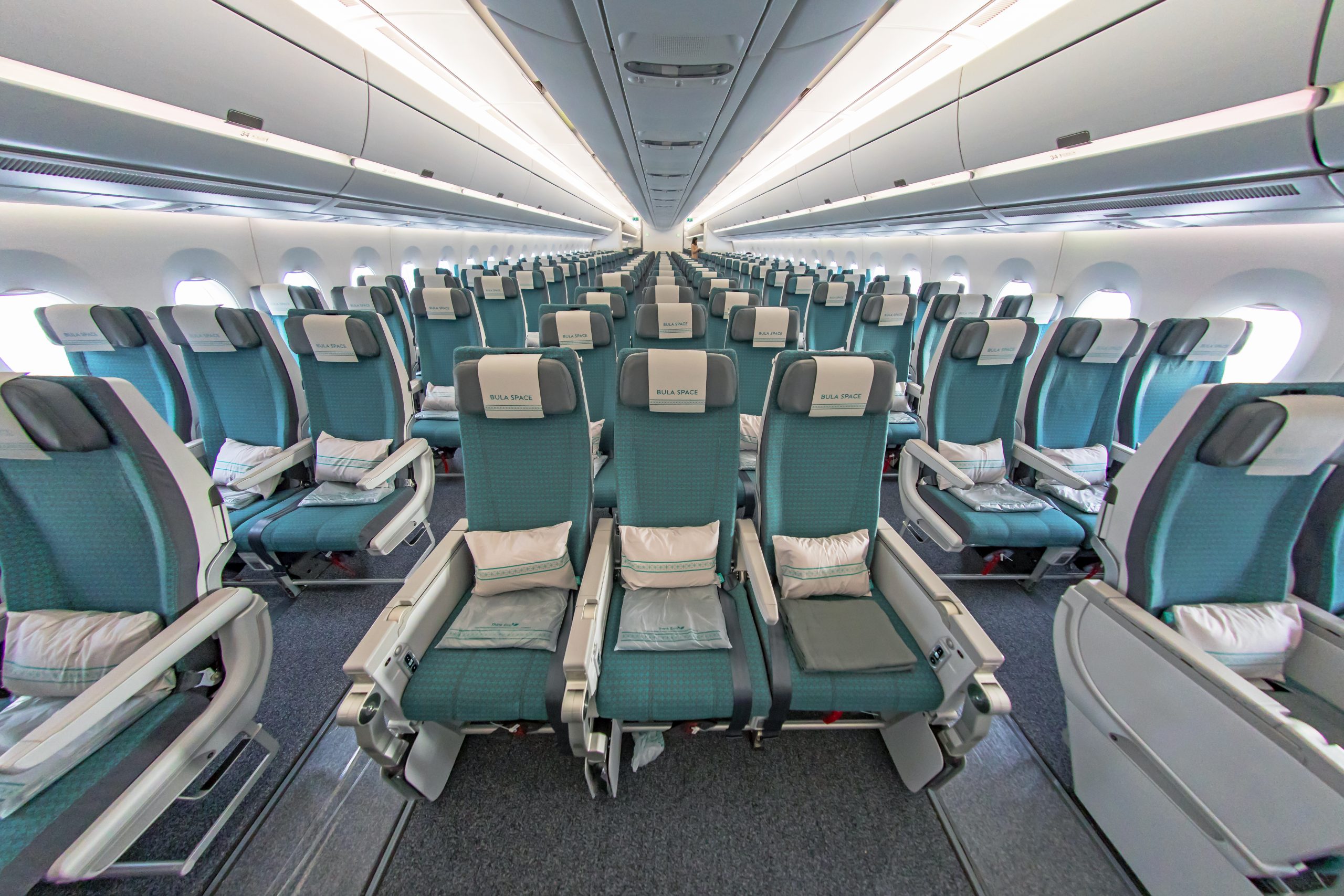 Economy class on the A350 will feature over 300 seats. (Photo: AirlineGeeks | William Derrickson)

The aircraft will not feature a premium economy cabin but will feature a small section called Bula Space. Paying the premium to sit in the 5-row section comes with extra legroom and amenities.

A standard economy seat on the aircraft features 31 inches of pitch with 18 inches of width while Bula Space seats offer up to 34 inches of pitch in the same width. All economy seats feature standard amenities such as a foldable tray table, 10.6-inch in-flight entertainment touchscreen, adjustable headrests, USB charging ports and 110v AC power outlets.

The induction of the A350 is the continuation of an exciting period of growth for Fiji Airways. Despite its smaller stature, the airline in recent years has joined oneworld as a connect partner, taken delivery of some of the world’s newest aircraft, all while boasting one of the youngest fleets in the South Pacific. 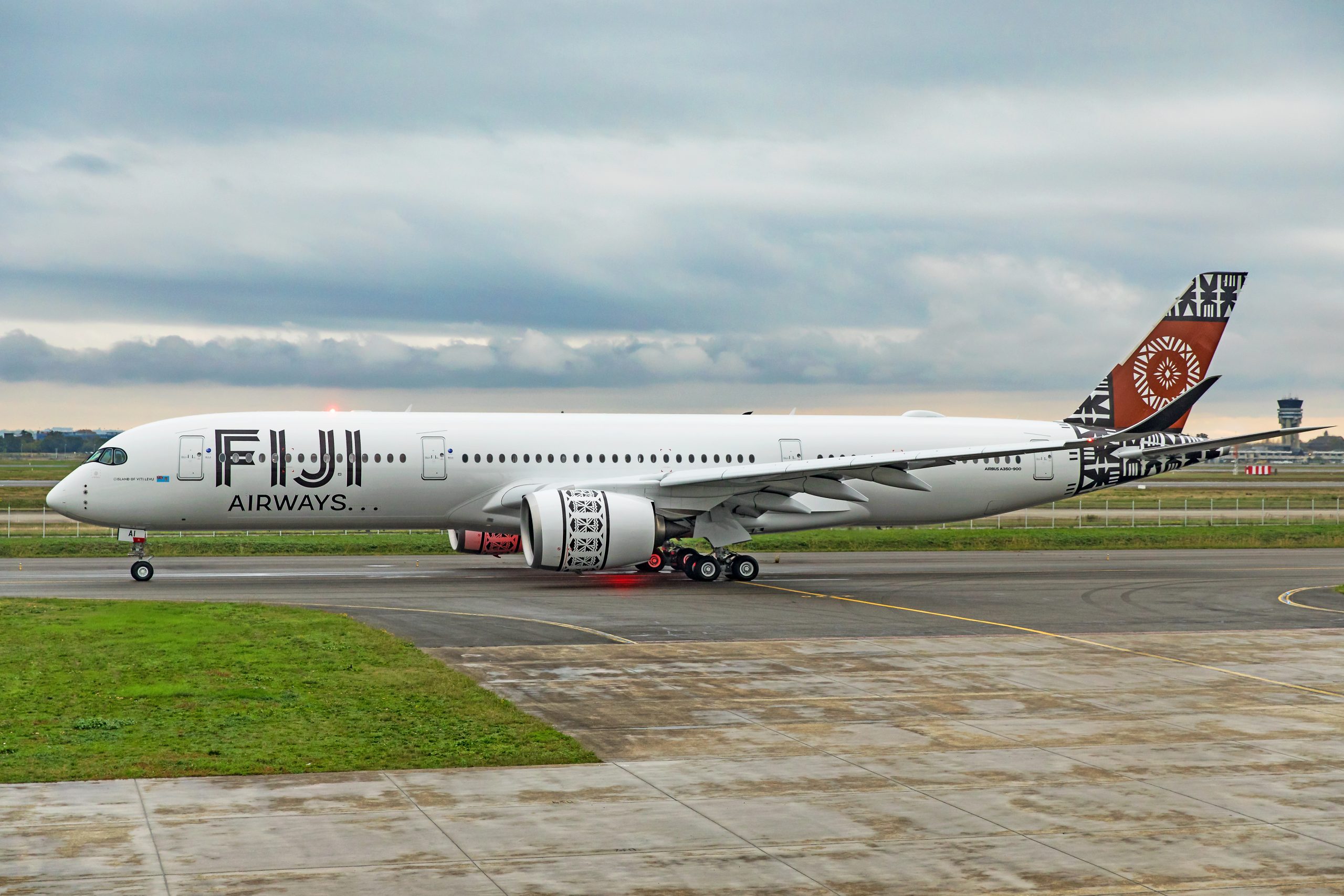 The Airbus A350 joins an already young Fiji Airways fleet with an average age of under 10 years. (Photo: AirlineGeeks | William Derrickson)

With Fiji Airways armed with a new aircraft capable of flying longer routes at more efficient margins, the opportunities are endless for the airline. Whether it be expanding to cities deeper in the continents it currently serves or launching one-stop service to Europe, the A350 will allow for the airline to do so if it wants.

With a refreshed fleet now consisting of the Airbus A350XWB and Boeing 737 MAX 8 when it returns to service, Nadi is poised to become a prime hub for the South Pacific. The city will dually serve as the gateway to Fiji and the surrounding islands, but also a connecting point between North America, Australia and Oceania.