Ryanair has announced it will be closing its base at Frankfurt-Hahn airport after German pilots rejected a proposed pay deal. Ryanair, which over the past three years has made over £3.2 billion ($4.1 billion) over the past three years, is using the coronavirus as a reason to reduce its crew wage bill in anticipation to operate in a smaller flying landscape in a post-pandemic world. The proposal was rejected by a tiny 0.6% majority of voters according to SimpleFlying.

In a memorandum sent to employees, Ryanair commented, “We must move on with alternative measures to deliver savings, which regrettably will mean base closures and dismissal”. As a result, the Dublin based carrier will close its base in Frankfurt Hern on October 1st and might follow the same direction with bases at Berlin Tegel and Weeze, near Dusseldorf. Ryanair will provide more information on this by next week.

Although the announcement has been officially made, based on past history, the carrier will categorically not pull out of the German market. But instead will use the tactic of spreading fear through its workforce to force them into accepting poorer working conditions and pay, further reducing the cost on Ryanair’s wage bill.

Michael O’Leary, Group CEO of Ryanair, conducted has in the past conducted guest lecturing and once said, “I’m often asked at these kinds of lectures how you motivate your people. And I think fear works great,” to the laughter of the audience.

The German pilots union, Vereinigung Cockpit, commented to the BBC that the deal was bizarre and that was favored by less than half of pilots. They also touched based on the fact that a deal like such could harm the entire pilot community across Germany, especially if it becomes a common practice across airlines in the country. 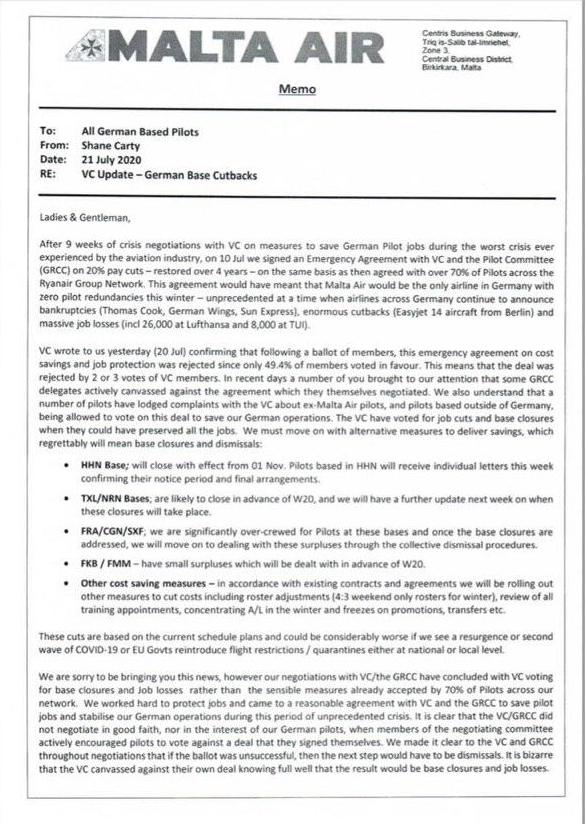 The memo sent out to German-based Ryanair pilots.

The union also considered that the job security to be ensured by Ryanair was insufficient, especially given the high trade-off for pilots The airline commented that pilots would be offered job security until March 2021 while salary cuts would be extended until 2024.

Ryanair’s proposal to pilots involved a 20% salary reduction over the next four years, paying pilots only for flight hours, but in return would avoid redundancies. The carrier commented that 70% of pilots across Ryanair’s network had accepted the proposal.

In the UK, pilots have accepted the new deal as the carrier expects to cut 1000 flights between Ireland in the UK throughout August and September as demand for flying remains low.

In May, Ryanair’s Austrian venture Lauda announced it was closing its base in Vienna after failing to reach a similar agreement with pilots, risking the loss of 370 jobs. However, the move was later reversed after Austria’s Vida pilot union, along with the chamber of commerce, worked on a collective wage agreement that was then accepted by the airline.

In the same way as their Austrian colleagues, Vereinigung Cockpit has not given up and is open with additional negotiations with Ryanair, hoping that German bases can be saved too.