Today, Denver International Airport unveiled four new gates in concourse B, the first addition from a long-awaited expansion project to begin use. The four new gates, located on the west side of the concourse, will be used by United Airlines starting this weekend. The new gates are part of a 39 gate expansion across the airport, with an additional seven gates under construction in concourse B. Concourse A will gain an additional 12 gates and concourse C will gain 16 new gates.

In addition to the four new gates, the airport opened up six new hold rooms or passenger waiting areas, as well as additional support space for airlines. In total the four gates opened today will account for an additional 89,247 square feet of space on the concourse. In addition to the gates, the new area includes a new restroom, a pet relief area and a nursing room. The new area will also feature concessions, which will be opened in the near future.

The new expansion will also feature a first for Denver International Airport. The new area, which opened Friday, will include an outdoor patio on which passengers to wait. The area includes outdoor seating, a fire pit, and views of the ramp and the Rocky Mountains in the distance. The pet relief area will also be located on the outdoor deck. 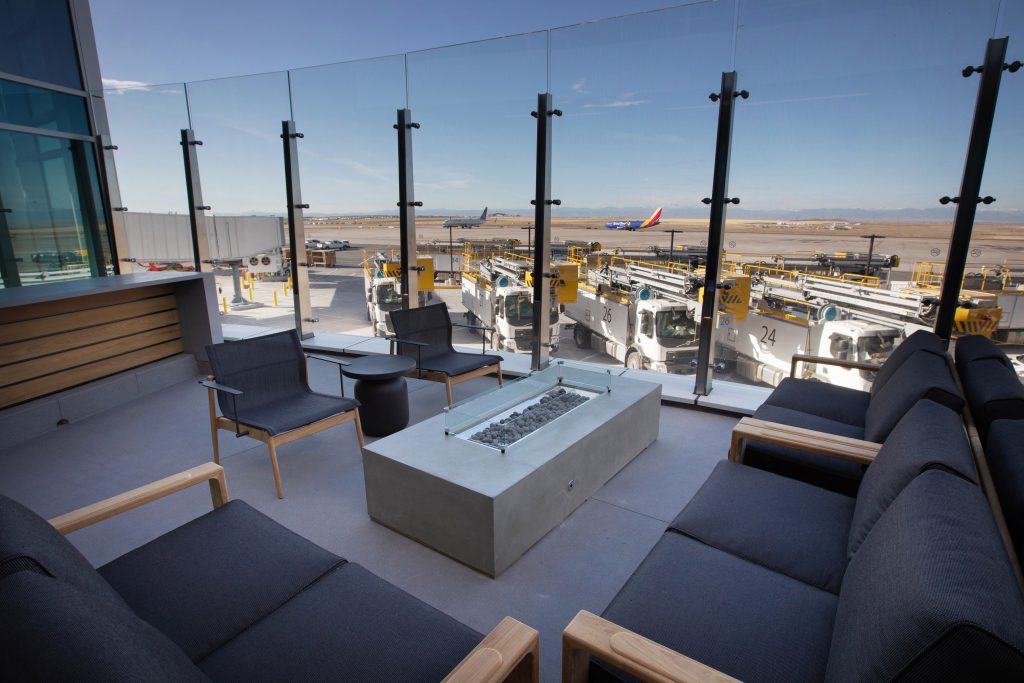 The new outdoor seating area and fire-pit on the westside of concourse B. (Photo: Denver International Airport)

The new gate area features digital signage to help and upgraded wayfinding to improve the passenger experience. The seating areas also feature charging outlets for travelers. Above the passenger’s heads, solar panels help to power the terminal and provide 100 kilowatts of power. The expansion was also designed to reduce power consumption by 20 percent and fitted with restroom fixtures designed to reduce water usage by 40%.

The four gates will be used by United Airlines starting this weekend. In total, 23 of the 39 new gates being built will be leased by United, and Southwest will lease the remaining 16 in concourse C. All new gates are planned to be fully operational by 2022. The expansion is part of a five-year, $1.5 billion capital development program to help the airline cope with projected increases in passengers.

The airport was designed to handle 50 million passengers annually and in 2019 surpassed that number to see 69 million passengers pass through. The expansion on the east side of concourse B as well as in concourse A and C are already underway. The project is expected to finish on time and within budget. The airport has been able to continue to safely work throughout the COVID-19 pandemic to help remain on schedule.

The expansion will help to provide increased capacity to the airport and enable continued growth from its airlines. The airport serves as the main hub for Frontier Airlines, as well as major hubs for United Airlines and Southwest Airlines. The expansion will also include a new United Club in concourse A and expand the existing United Club in concourse B. Once construction is complete in 2022, the airport expects to be able to handle 90 million passengers per year.