Eastern Airlines has announced another expansion in the Northeast and in South America. The third incarnation of the famed Eastern Air Lines — stylized slightly differently from newer versions — will launch eight new routes in the new year, with the first starting in late January.

Earlier in the year, the airline had already announced four new routes, making for a total 12 new routes for the carrier in 2020. The airline only launched scheduled operations at the beginning of 2020 with just two routes, and now, if all goes to plan, will have 14 routes by the end of May 2021.

Continuing its focus on routes to South America, seven of the eight are to the continent from the U.S. The eighth route, if started, will become the airline’s first scheduled domestic flight. Previously the airline announced flights between Philadelphia and Miami. However, the flights are not bookable on its website and have been removed from its route map. The first new route for the carrier will begin later in January while the latest addition will start in late May 2021. 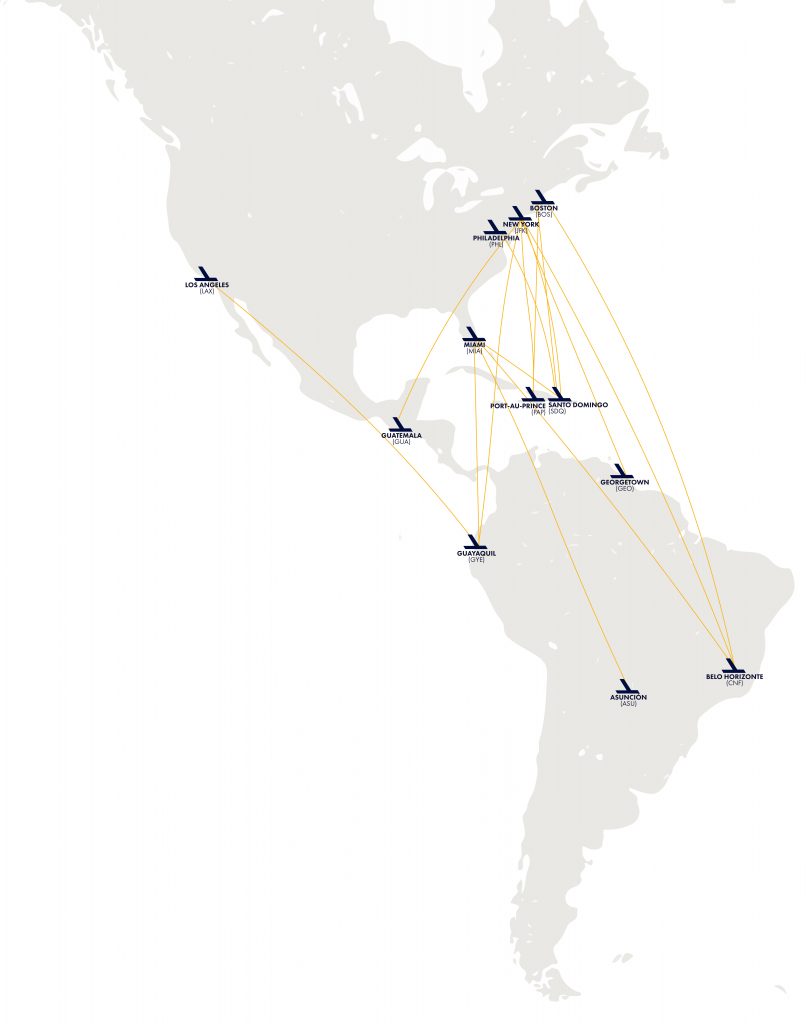 As reported earlier in the month by AirlineGeeks, and confirmed by local authorities, Eastern will launch three routes to the U.S from Belo Horizonte, Brazil. Starting March 28, the carrier will start twice-weekly flights to Boston, followed the next day to Miami and the following day to New York’s John F. Kennedy International Airport. The flights will be the only flights to the U.S. from Belo Horizonte. Previously Continental Airlines operated between Newark and Belo Horizonte, but that flight ended in the early 2000s.

Also beginning March 28, the airline will begin service to Quito, Ecuador from Miami and New York’s John F. Kennedy International Airport. The flights have not yet been loaded into the airline’s booking system but will likely be operated twice-weekly, like most routes Eastern operates. The airline will face competition on the Miami route, with American Airlines operating daily flights between the cities. Quito will become Eastern’s second destination in Ecuador, as it already operates several routes from Guayaquil, located on the Ecuadorian coast.

The airline will connect Philadelphia with Mexico City beginning March 28. The flight will be the only one between the two cities. At the time of writing, the flights have not yet been loaded onto the Eastern Airlines booking site. The route will be the second from the City of Brotherly Love for the airline, with flights currently scheduled between Philadelphia and Santo Domingo, Dominican Republic.

The final announced route is the only domestic route for the airline. On May 28, Eastern plans to launch nonstop flights between New York’s John F. Kennedy and Anchorage. The flight will be operated once a week and will be the only passenger flight between the two cities. Several cargo airlines operate between the two cities as they are two major cargo hubs. Currently, the only nonstop passenger flight to Alaska from New York is seasonal service between Newark and Anchorage on United.

The expansion plans continue the unique business strategy for Eastern. The carrier is primarily targeting budget travelers between the U.S. and South America. In the past, the original Eastern was one of the largest operators between the two continents. Now the carrier is trying to recreate the past, although focusing on the vacation and traveler visiting relatives, rather than business travelers.

The airline believes that this business plan of long, thin, point-to-point routes is a viable one. With a lower cost structure than legacy carriers, management believes that these routes have enough demand to be successful. The airline has also benefited from the COVID-19 pandemic creating a plethora of cheap aircraft available to purchase. This has been seen with the airline’s fleet of used Boeing 767 and Boeing 777 aircraft.

Additionally, the airline’s plans to operate flights non-daily flights will not attract any business travelers, but by keeping costs and ticket prices low, the airline may be able to attract the leisure traveler it needs to keep operating. By being the only operator on many of its routes will also give it an advantage for travelers looking to avoid changing planes on already long routes.