In the first moment, cities served in Italy will be Bari, Catania, Firenze, Forlì, Lamezia Terme and Parma. From June, Bergamo, Cagliari and Rome will join the network. 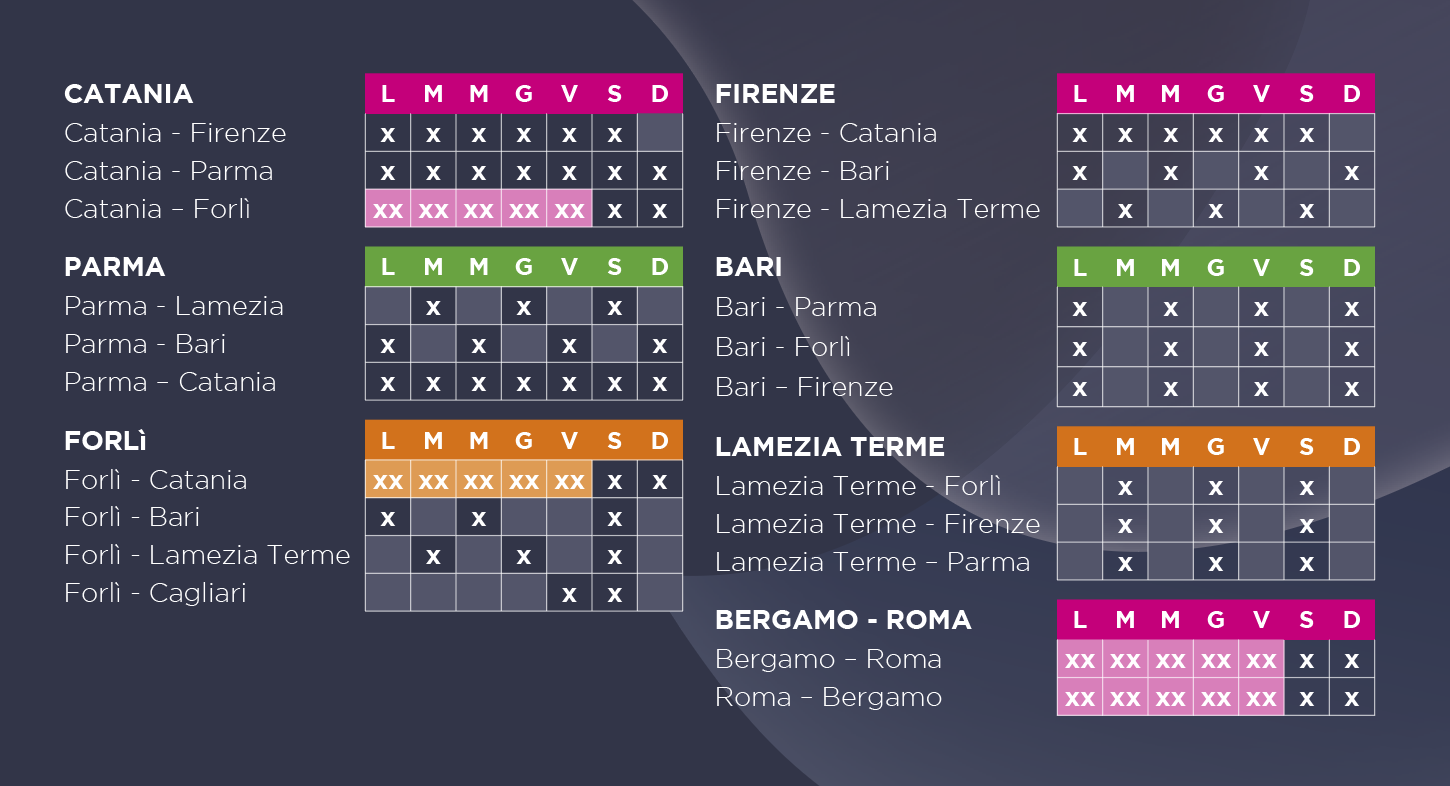 The airline’s routes and its schedules. (Photo: EGO Airways)

EGO Airways is an investment led by OCP Group — based in Piacenza — which appointed one of its partners, Marco Busca, as president of the airline. According to L’Agenzia di Viaggi, an Italian tourism website, OCP owns 60% of the startup, which has an initial investment of 4 million euros ($4.89 million). The project was idealized by Matteo Bonecchi, now CEO.

“Now, after all these months of work and effort, I’m more than everything, proud: proud of accepting the challenge of a startup and also proud of the fantastic team we’ve created,” Busca said in a press release. “Thanks to my role as an investor, but also of President and accountable manager, I’m currently involved first-person in the airline’s operativity and can confirm to you that our goal is to bring EGO Airways, in 5 years, to be a reference of international level for Italian aviation.”

The airline will count on two Embraer 190s from the start of its regular flights. One of the pair has been in Italy since October 2020. It carries registration I-EGOA and is named “Martina.” During the last few months, besides test flights, the aircraft has completed charter operations, the last of which involved carrying the Napoli soccer team to Trieste, Italy, as per Italiavola, a website specializing in Italian aviation.

According to Airfleets, I-EGOA was manufactured in 2008 and initially served Panama’s Copa Airlines, being redirected to Copa Airlines Colombia in 2010. After going to storage in 2019, Germany’s WDL Aviation — now called German Airways — brought it to its fleet in June 2020, passing it to EGO Airways’ hands in October in a leasing contract.

Still, according to Italiavola, the first two Embraers will be based in Catania and Forlì, with the third one, beginning June, being located in Bergamo.

Both in a press release and in a December press presentation, EGO Airways insisted on presenting itself not as a low-cost, but rather as an airline providing a flexible service to the passenger, according to what the customer is willing to pay, but fares are available for as little as 48 euros.

EGO Airways’ network is convincingly point-to-point, although it claims to have “hubs” in Catania and Forlì, where its first two aircraft will be based. But the airline mentioned in the press release that it also wants to help to feed other airlines’ flights from Malpensa Airport in Milan, an airport it still has not announced flights to. In December 2020, EGO COO Edoardo Antonini said, “We’re already in talks with the main airlines that operate in the airport,” says L’Agenzia di Viaggi.

The domestic network of transportation in Italy is well served. While Alitalia is more focused on Milan and Rome, point-to-point services see intense competition by trains and, via air, by Ryanair. Funnily enough, EGO Airways was smart enough not to compete with the Irish heavyweight. Of all eleven routes announced by the Italian startup, none of them compete with the ultra-low-cost carrier, not even considering possible connections.

Seemingly though, EGO’s strategy will keep avoiding routes flooded by competition, as of all potential routes from these destinations reported by the Italian website, only one is served by Ryanair. This way, EGO sees itself competing more with rail connections, as pointed out Marilena Bisio, who directs the airline’s sales, in a December presentation.

“We will offer appropriate product lines that can be competitive regarding the rail lines,” Bisio said, not even mentioning another airline.

Whether EGO will make this mission profitable or not, it is still not certain. Nut with 2021 bringing a much hoped for and needed recovery in demand for travel — even if a partial one — the company hopes to surf this wave successfully moving into 2021.

On Monday, Greece's flag carrier Aegean Airlines signed a codeshare partnership agreement with the national airline of the Arab Emirate of Dubai, Emirates. Aegean Airlines, through this deal, has thus reached 18 Airline Partners and further consolidates its network. This agreement between Emirates and Aegean Airlines will allow travelers to…