An Allegiant A319 in Las Vegas (Photo: AirlineGeeks | William Derrickson)

Allegiant Air has announced a large network expansion including the addition of three brand new cities for the airline. The Las Vegas-based carrier announced 21 new routes, all starting in 2021.

Oregon’s largest city will see flights to two cities in California and one in Idaho. Key West will see service added to Allegiant’s bases in Nashville and Orlando. Popular leisure destination Jackson, Wyoming will see service from four western cities including Los Angeles and Las Vegas.

In a press release, Drew Wells, Allegiant vice president of revenue and planning said, “Today, travelers are seeking destinations that allow them a chance to recreate in a safe way, usually outdoors. The three cities we’re adding to our network – Key West, Portland and Jackson Hole – are gateways to some of the United States’ most scenic destinations, including national parks and other outdoor attractions that are in high demand.” 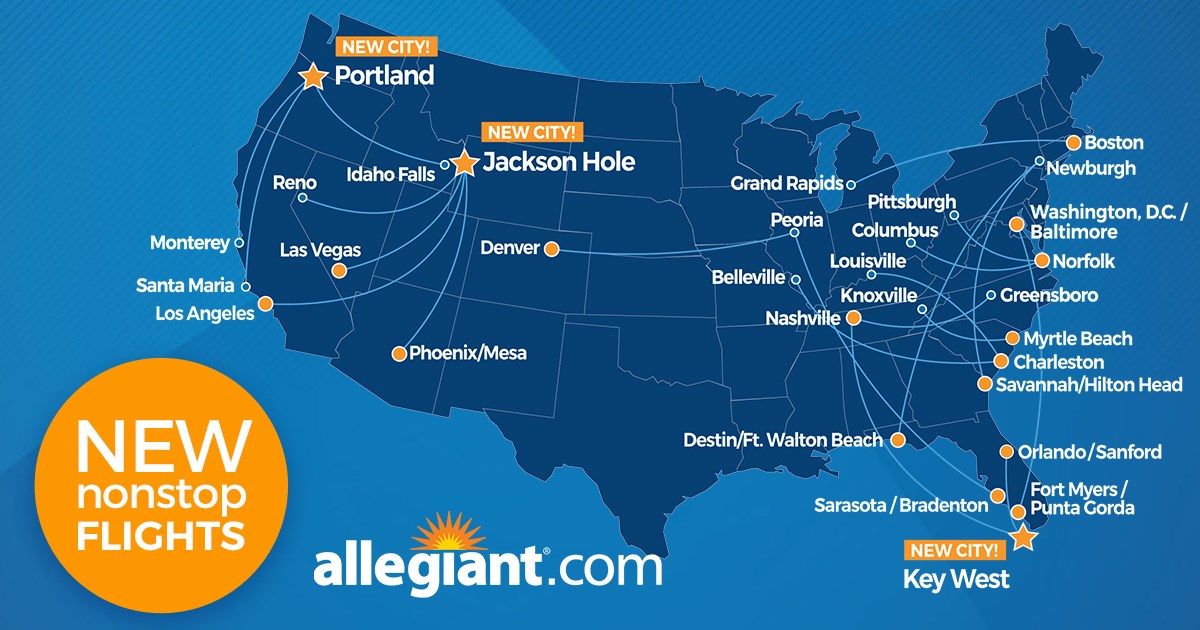 In addition to the new destinations, Allegiant is also expanding its network in places it already serves, including Baltimore; Charleston, South Carolina and Peoria, Illinois

The airline will add two routes from General Wayne A. Downing Peoria International Airport. Service to Sarasota, Florida and Denver, Colorado will begin on May 27 and May 28 respectively.

Along with the new Sarasota route, the airline will be adding additional flying from nearby Punta Gorda, Florida with the launch of flights to Baltimore, Maryland on May 27.

Charleston will see a new flight on May 28 with the start of flights to Belleville, Illinois/St. Louis, Missouri using MidAmerica St. Louis Airport.

Of the 21 routes announced, 8 were previously announced with starts delayed due to the COVID-19 pandemic.

Many of these flights are to seasonal destinations. However, it remains to be seen if any will be operated on a year-round basis. Allegiant’s schedule currently only runs through August 16, 2021, giving very little indication of the seasonality of these new routes.

Tickets for all new flights are already for sale.