An Allegiant A319 in Pittsburgh. (Photo: AirlineGeeks | William Derrickson)

With the coronavirus vaccine slowly making its way across the United States, low-cost carrier Allegiant Airlines loaded a host of new routes into their website late on Monday night. With this update, the Las Vegas-based carrier hasn’t focused on any region in particular but has instead added routes all over the map.

A total of 43 new routes have been added in this recent announcement. 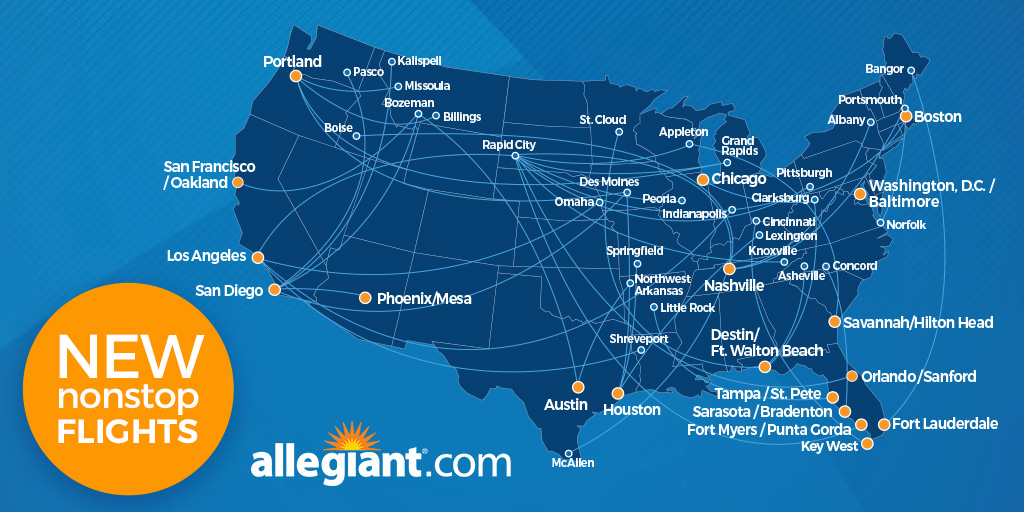 A map of the newly announced routes (Photo: Allegiant)

This Texan city will be seeing two new routes in this update: Bentonville, Arkansas, which begins on July 2, 2021, and Bozeman, Montana, which will begin on May 27, 2021.

One of Allegiant’s newer cities will be gaining two more destinations with this update: Norfolk, Virginia and Indianapolis, Indiana, both of which begin on May 28, 2021.

Allegiant will be adding multiple destinations from Bozeman, bringing Montana residents to warmer climates in the South. The new routes may be especially appealing to passengers across the country looking for a getaway as the coronavirus vaccine is rolled out.

This city will soon be opening an Allegiant base, and it only makes sense that they should add routes from this city.

New routes include Houston Hobby, San Diego, California and Portland, Oregon all of which begin on July 1, 2021.

This city on the Florida panhandle will be receiving three new routes.

In addition to the previously-mentioned route from Boston starting May 28, 2021, Indianapolis city will also be receiving new service to Los Angles that begins on the same day.

Los Angeles International Airport will be receiving an astounding four new routes in this update.

The music city will also come out near the top of this announcement with four new routes.

One of Allegiant’s newest bases on the west coast will also be receiving four new routes in this update, including one route that will be one of the longest in the Allegiant network.

Billings and Missoula, Montana will both begin on May 7, 2021; Des Moines, Iowa starts July 1, 2021 and Grand Rapids, Michigan on June 4, 2021. The new route to Grand Rapids will be one of the longest routes in the Allegiant network.

The San Diego International Airport will be gaining the most non-temporary routes with this update, with five new routes.

This South Dakota city will be getting nine new destinations, bringing its total of nonstops to 11, but only temporarily. It is among Allegiant’s biggest expansions this time around, despite all of the routes being served on a very limited basis.

All of these new routes are being flown due to the Sturgis Motorcycle Rally held in Rapid City, S.D. in the beginning to the middle of August. Each of the following routes will be flown from the first week in August until mid-August: Appleton, Wisconsin; Indianapolis, Indiana; Peoria, Illinois; Nashville, Tennessee; Pittsburgh, Pennsylvania; Grand Rapids, Michigan; Orlando/Sanford, Florida; Knoxville, Tennessee and Punta Gorda, Florida.

As expected, not every city had tons of new routes. Other new routes include the following;

Little Rock, Arkansas to St. Petersburg, Florida beginning on May 27, 2021

Editor’s Note: This article was originally published on Feb. 8. It was updated on Feb. 9 to reflect new developments released in an official statement from Allegiant.