The NTSB has released an update on its investigation into the catastrophic engine failure on United Airlines flight 328. The incident received widespread media attention when the engine cowling from the Boeing 777 landed in the front yard of a house in a Denver suburb. None of the passengers or crew onboard the aircraft were injured, nor was anyone on the ground injured. The incident led to airlines grounding certain Pratt & Whitney powered Boeing 777s around the world while the investigation is conducted.

The flight had departed Denver International Airport for a scheduled flight to Honolulu. About four minutes after takeoff, with the aircraft passing through 12,500 feet, the crew added power to the engines to expedite the climb to 23,000 feet to minimize the time in turbulence. It was at this point the right engine failed with a large bang heard by the crew. In addition to indications that the engine had failed the crew received warnings that the engine was on fire.

Despite utilizing both fire bottles in the right engine, the fire alarm did not immediately extinguish. The crew was able to successfully perform a single-engine landing back in Denver. The aircraft stopped on the runway where the fire crew extinguished the fire in the engine. After verifying with the airport fire crew that the fire was out, the aircraft was towed off the runway and the passenger exited via airstairs.

Airlines and Agencies Respond to Incident

The NTSB began an investigation upon notification of the incident and launched its go team to Denver. In addition to NTSB members, representatives from Boeing, Pratt & Whitney, United Airlines, the FAA, and the Air Line Pilots Association are taking part in the investigation. As the aircraft remained intact throughout the incident the NTSB was able to easily recover the aircraft’s CVR and FDR and it is currently in headquarters in Washington D.C. for analysis. Interviews with crewmembers will also help the investigator in understanding the incident.

Upon initial inspection of the right engine, it was clear that two blades of the engine fan were missing. The investigators coordinated with local authorities to recover debris from the engine that had fallen on Denver neighborhoods. Preliminary analysis of the fan blades that broke off the engine indicates that there were undetected fatigue cracks that failed. The blades last received a thorough inspection in 2016, of which the data was reviewed in 2018. 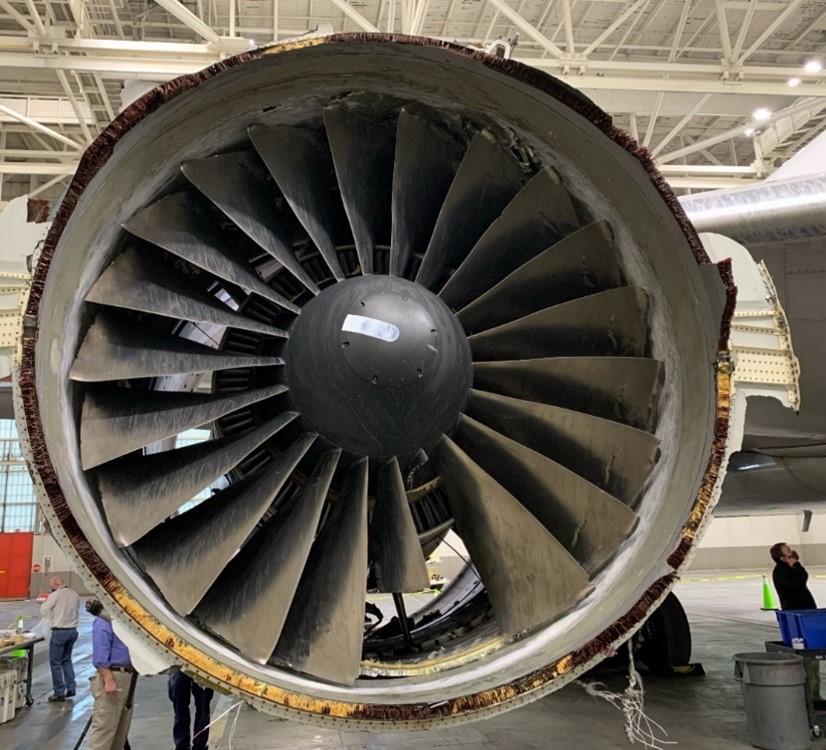 Image showing the missing blades on the right engine of United 328 (Photo: NTSB)

In response to this initial finding, Pratt and Whitney sent out an advisory to decrease the time between inspections to 1,000 flight hours. The next day the FAA issued an emergency airworthiness directive that required airlines to perform an inspection of the fan blades on the affected engines before the aircraft’s next flight. If the blade does not pass the inspection the airline will have to replace the affected blades before the aircraft’s next flight. The airworthiness directive applies to all US registered aircraft with the engines and is generally followed by other countries requiring the same inspections by the FAA.

The NTSB investigation will continue into the United 328 incident, however, the update provided gives an insight into what caused this incident. A final report will likely not be released until late in 2021, but indications appear to point towards a fan blade failure causing a catastrophic engine failure. A similar incident occurred in 2018 with a Southwest Airlines Boeing 737 that caused a rapid decompression and the death of a passenger sitting near the engine. Although it was a different engine type on the Boeing 737, the two incidents appear to be similar.