With new airlines like Breeze Airways and Avelo Airlines entering the skies above the United States, we decided to take a look at the newest commuter airline, Dash Air Shuttle, and look into just exactly how they plan on operating. I had the opportunity to talk with the President of the carrier, Clint Ostler, about Dash Air Shuttle and how their operations will unfold this fall.

Dash Air Shuttle was founded in January 2021, launching as a Part 135 airline that has plans of operating services around the Pacific-Northwest. They hope to fill the gaps left by larger airlines when they retired small aircraft and were forced to end service to smaller cities and communities. The first route they plan on starting will be from Seattle-Tacoma Airport to Port Angeles located on Washington’s Olympic Peninsula. According to the local Post Angeles news website “Sequim Gazette,” the last airline service the community had was back in 2014 on Kenmore Air Express to Boeing Field located in Seattle.

Clint Ostler made it very clear that the vision of the airline is to “build a dynamic regional airline that is designed to restore affordable, higher frequency service to short-haul communities that have lost airline hub service.” Port Angeles is a prime candidate of Dash Air Shuttle, they lost airline service completely, they have a flight distance of under 100-miles, and are a good driving distance away from any commercially served airport. It also helped that Port Angeles received a federal grant of $200,000 to help the air service get off the ground and restore air service.

As they continue to think about growing service, they are looking or communities that are willing to make “significant financial commitments” and want to share the risk of getting air service started. This financial commitment from the communities will lessen the monetary risk of Dash Air Shuttle launching flights as beginning a new route and solidifying service can become very pricey for airlines and the people who run them.

The first phase of the new carrier will have them focused solely on a Seattle-Tacoma hub, eventually expanding out to Oregon and Idaho, and will serve destinations in California and New Mexico further down the road. While they didn’t name any other cities specifically they like to begin service to, they did say that there are over a dozen regional markets without service in the Pacific Northwest alone that an airline like Dash can fill.

At the end of June 2021, they even received their first couple of aircraft from Massachusetts-based airline Cape Air, more specifically three Cessna 402’s. Now they are currently in the certification process with the Federal Aviation Administration, FAA, and are awaiting word on when they can begin flights, but hope to launch by the end of Sept. 2021. 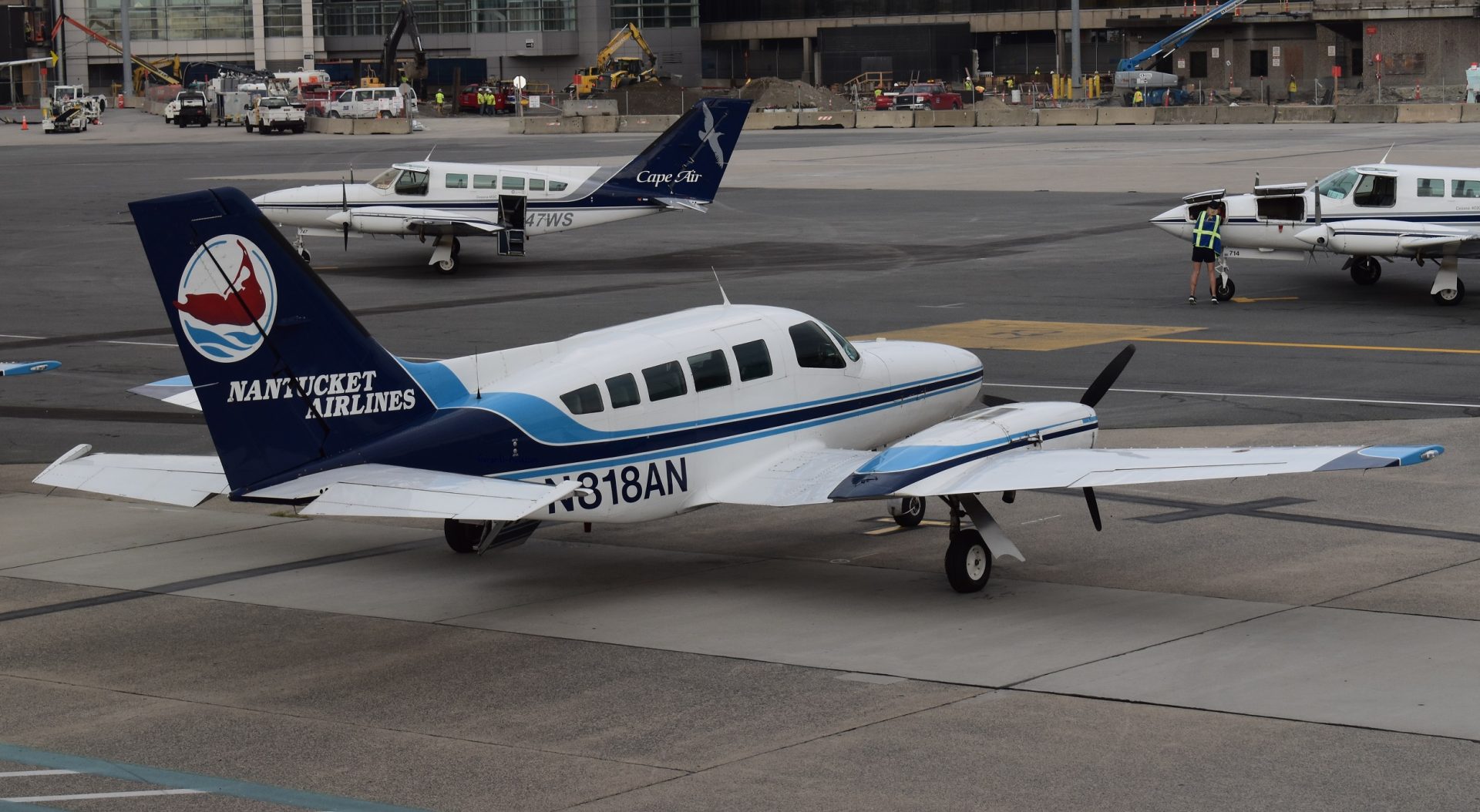 Dash is looking to replicate Cape Air’s success on the west coast, a fleet of Cessna 402’s operating short routes to small cities. Also like Cape, they mentioned that their flights will eventually become single-pilot operated. Although towards the beginning of Dash’s life they will fly mostly dual-pilot ops so pilots can become more familiar and comfortable with the type while they build up flying hours. Despite not even having flown their first passenger flight, they also hope to “eventually electrify the airline” and fly a fleet of entirely electric-powered aircraft.

AirlineGeeks (AG): Once the FAA approves the certificate, how long will it take to launch flights?

Clint Ostler (CO): Everything is ready to roll, but we really want to have at least a 45-day booking window from the FAA approval point, just so we have an opportunity to fill the planes and build a base for our launch. Port Angeles will be ready to start immediately, but the reality is that would leave a lot of empty airplanes which isn’t practical from a money-making standpoint.

(AG): Will the desired September start date be pushed back in the FAA process takes longer than expected

(CO): At this point, we are at the mercy of the FAA, if they don’t approve it by mid-August [2021] then we will have to push out the start date. Obviously, we want to start as quickly as possible, but we really need to be up and running by the end of the year just from a financial standpoint. We are confident we will be flying by then, and even more so earlier than we thought.

(AG): Will Dash Air Shuttle be the operator of the flights or will they be operated by another carrier?

(AG): What will the livery be for Dash Air Shuttle?

(CO): We are eventually going to paint them because the goal of our airline is to eventually be all-electric it will incorporate a lot of green into the paint scheme mostly on the tail of the aircraft. We are currently working on coming up with the final livery and have gone through many iterations of that, but we do have a logo. Due to Covid-19, most of the aircraft paint shops have a pretty big backlog of customers so we won’t be able to paint anything until next spring, so between now and then we will most likely just do a decal application of our logo.

(AG): How many pilots does Dash currently have, and how many will you have while you are fully up and running?

(CO): Based on the current starting schedule we plan on having [to Port Angeles] we would need five pilots, and we are actively hiring and recruiting those five pilots.

(AG): Kenmore Air Express has flown Seattle [via Boeing Field] to Port Angeles in the past and couldn’t turn a profit on it even using their eight-seat Cessna 208’s, how does Dash plan on doing this when Kenmore couldn’t use roughly the same sized aircraft?

(CO): In the case of Kenmore there were a couple of issues. First, they flew to Boeing Field and over 90% of the people were connecting to other airlines at SeaTac [Seattle-Tacoma Airport] so they needed to take a bus or van between the airports, all of that extra time waisted on the transfer makes flying the route not as compelling, it was not a solid way to build a business. While it did work for many years, they started changing their schedule a lot which didn’t help with connections and it wasn’t economically viable. Secondly, the aircraft they were operating, the Caravans [Cessna 208] is a very expensive airplane from an ownership perspective, so while we are using an older platform [Cessna 402] our ownership cost is a lot lower which transfers to a lower ticket cost for passengers.

(AG): Is Dash looking into any codeshares or partnerships with airlines at SeaTac?

(CO): We legally can’t yet because we don’t have a certificate yet, but we have built our schedule around that connectivity and we built the schedule around the top three airlines at the airport today, Alaska, Delta, and Southwest. This is so they can make those connections, even though we aren’t operating from the main terminal.

(AG): Where will you operate out of SeaTac?

(CO): We will operate from Signature on the other side of the airport and will offer a shuttle to the main terminal for passengers.

(AG): Port Angeles doesn’t have TSA screening capabilities at the moment which is one of the reasons you can’t fly directly into the main terminal at SeaTac. Will you eventually look into adding a TSA checkpoint in Port Angeles?

(CO): Yes, that is the plan in Port Angeles and we are already having conversations with TSA in the Port Angeles area. They are waiting to see if we are successful first before investing a lot of money to add the security checkpoint. But in Seattle the way the cost structure is set up, it’s not economically viable for a small airline operator to operate out of the big terminal, so we would have to work with them to restructure some costs.

(AG): The Cessna 402 doesn’t have that much space for checked bags or even carry-on bags due to its small size, how does Dash plan on dealing with this?

(CO): That’s a fair point, the Cessna is definitely limited in the baggage capacity. So we are going to be following the industry best practices, for example, Cape Air fly’s to dozens of cities similar to Port Angeles in terms of size and demand. If baggage doesn’t fit we might have to send out an extra aircraft to pick up the bags, but hopefully this won’t be very common. If we do see a demand increase during the peak season we can add more flights for customers, with the three aircraft we currently have we can operate up to nine or ten daily flights between Seattle and Port Angeles.

(AG): When do you plan on adding additional aircraft to your fleet?

(CO): We are pretty much going to stick with the three aircraft we have now until next summer to see how it goes first, when we ramp up with our growth we will add more but that won’t be until next summer at the earliest.

(AG): You are Cessna 402 operator and some of your practices are following the Cape Air model, do you plan on working directly with the carrier in the future?

A big thanks to Clint Ostler for talking with me about Dash Air Shuttle, and we wish you the best with your new carrier.