Once I got an interview with the airBaltic’s CEO in their headquarters in Riga – whose article you can see clicking here -, I got curious to know how would I get there. While the airline served the bread-and-butter destinations of Milan and Rome, during Summer they were serving Pisa seasonally – which, along with Florence, is the closest airport to my hometown.

Ultimately, I got tickets from Pisa, even though they were doing only two weekly runs, on Monday and Friday; that meant my schedule in Riga would be quite spread over the week.

In any case, I was really looking forward to flying with them since they only fly the Airbus A220, a regional jet that is the main competitor to my beloved Embraer E2.

I arrived at the airport with plenty of time to spare. Two hours before the flight check-in was opened in two counters, and because I’d been given Business tickets, I had an exclusive line. 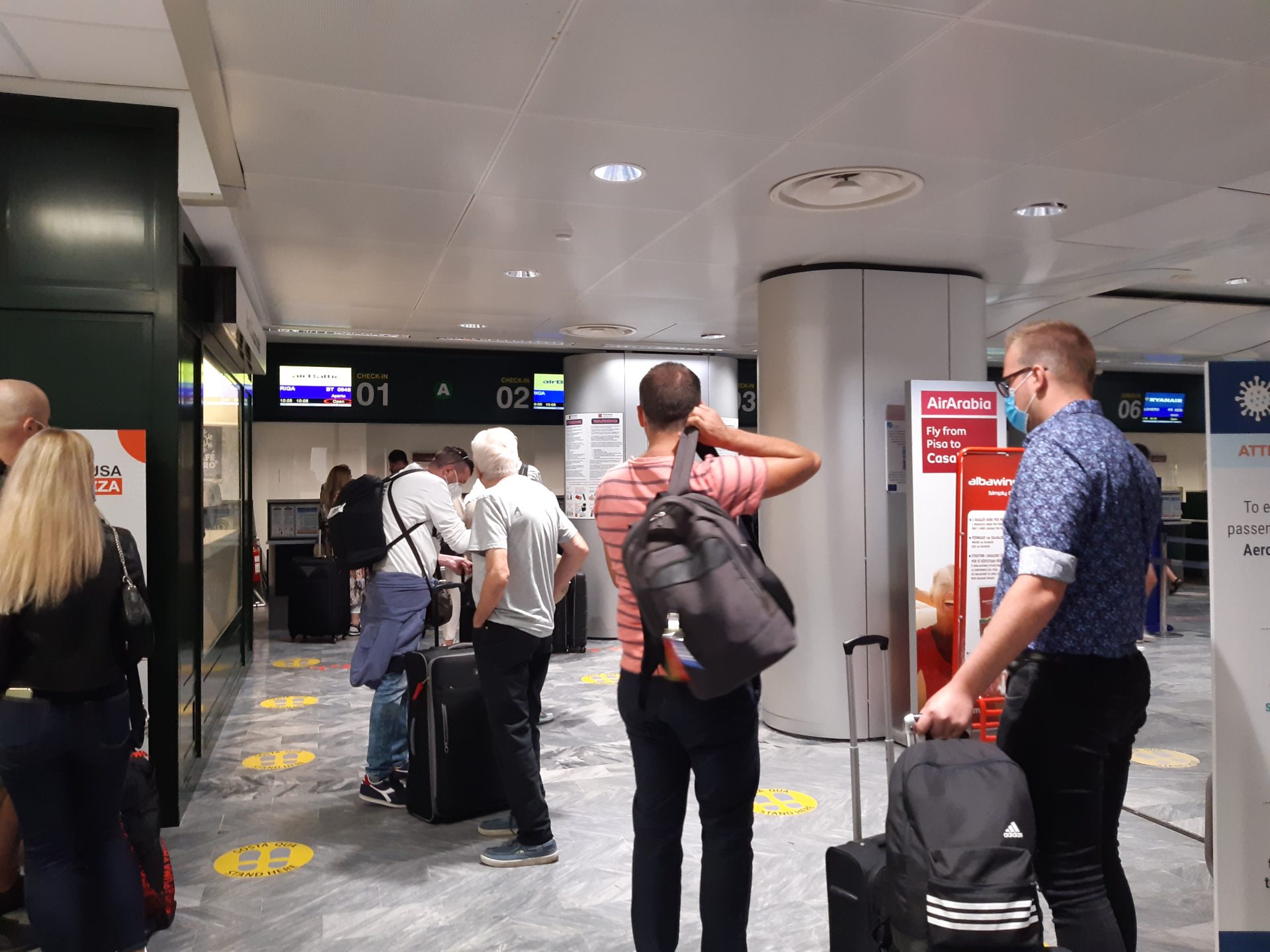 Because of that, I waited for nothing until I had my luggage dispatched and my boarding pass was printed. 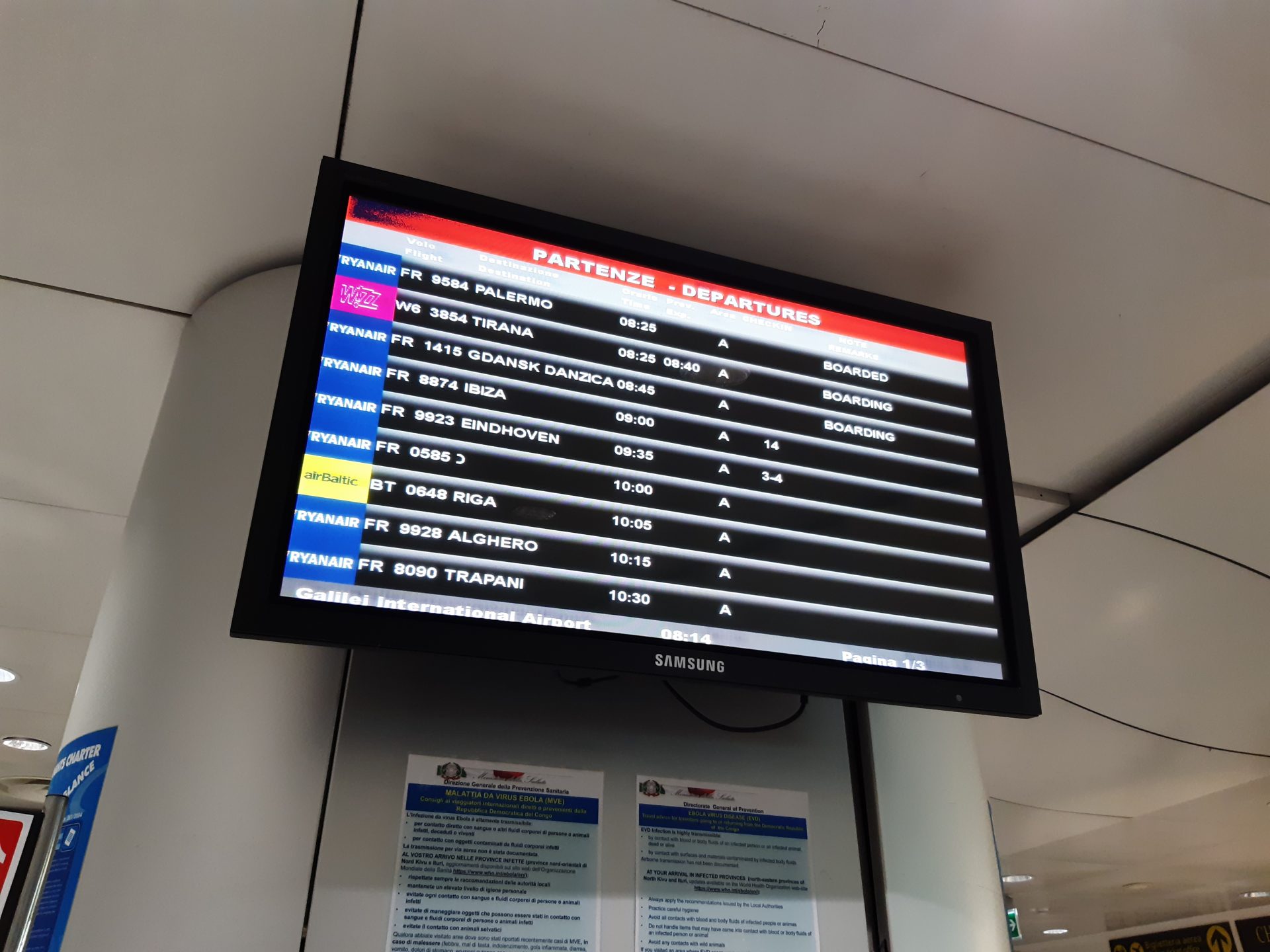 Flights of the day from Pisa. (Photo: AirlineGeeks | João Machado)

The check-in agent also saw my self-declaration form for an entry in Latvia and my EU Green Pass, proving that I was, indeed, vaccinated.

Filling the form for an entry in Latvia was easy, and done via mobile. (Photo: AirlineGeeks | João Machado)

As much as the flight’s counters, the fast track line was accordingly hidden, but at least, once again, I didn’t have to wait for my safety screening. 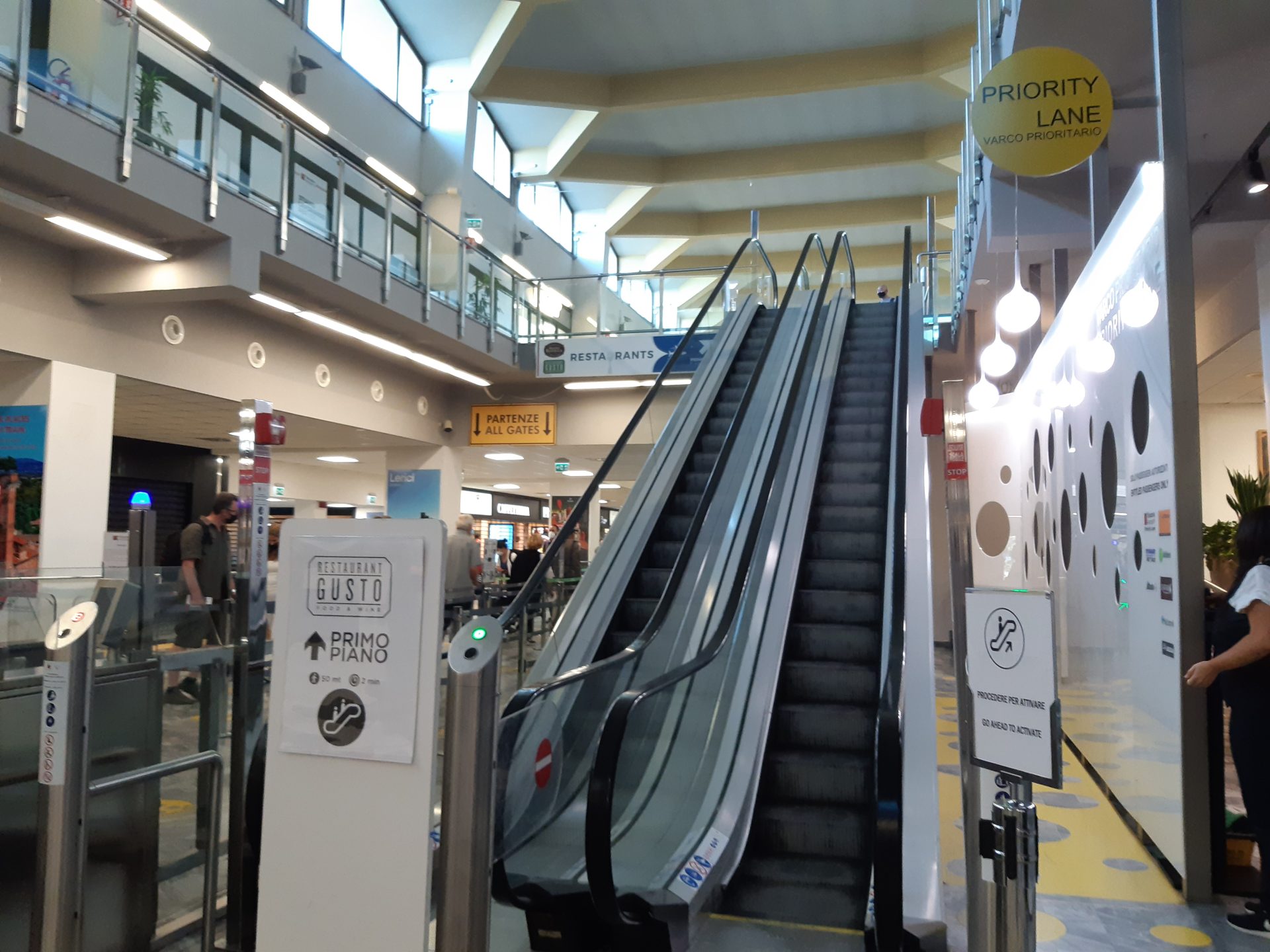 I was tracking my plane on FlightRadar24, which apparently was on time. Naturally, the aircraft would come from Riga, doing just a quick turnaround in Pisa, with the same crew.

The aircraft for my flight would be YL-CSH, which, according to Planespotters.net, was delivered brand new to airBaltic in February 2018.

At 09h35 boarding was called, without any priority lines or anything. Effectively, boarding was started at 09h37.

In any case, priority wouldn’t be needed, since they packed everyone in a bus to the aircraft anyway. 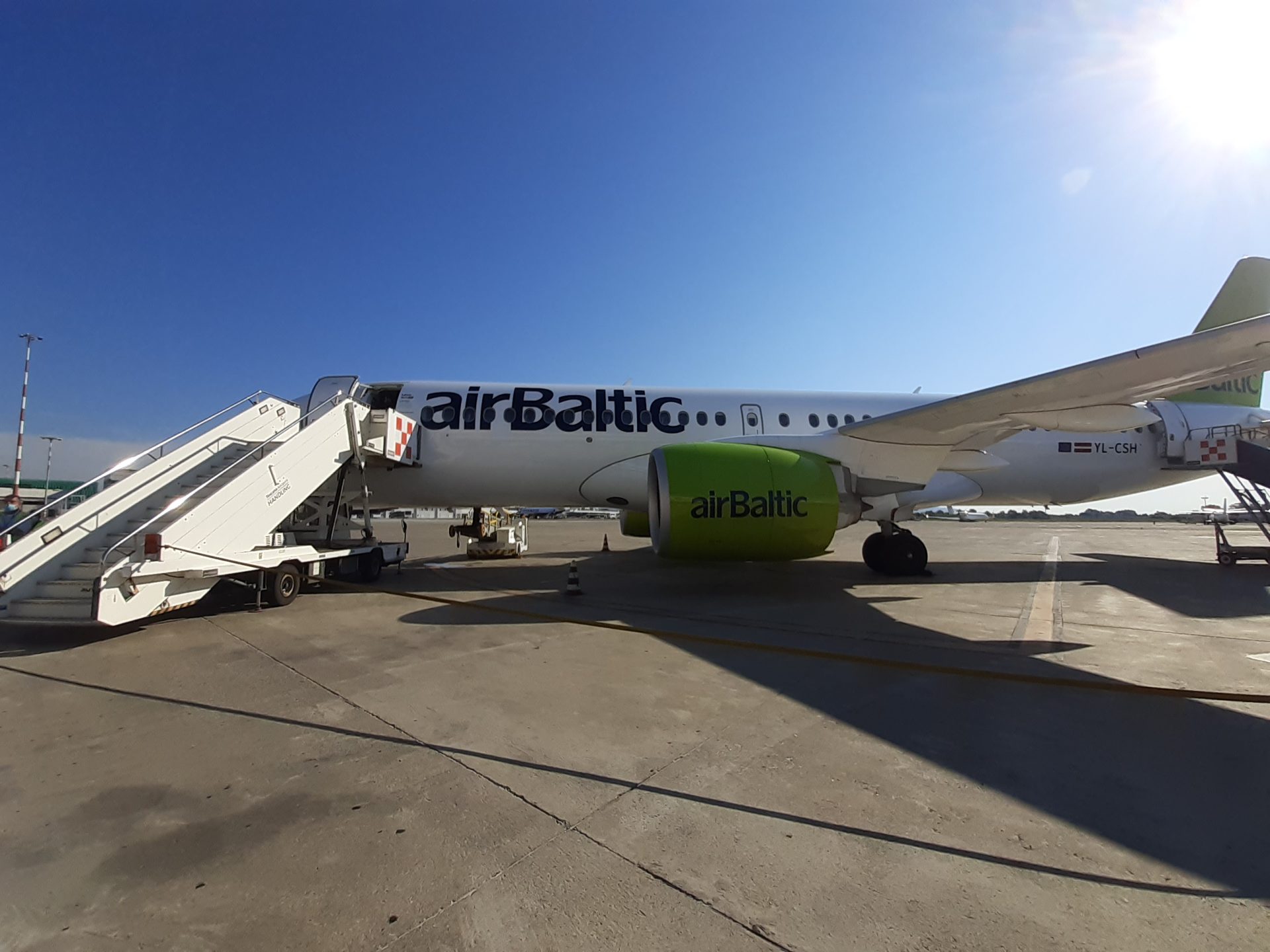 I was greeted by the lead flight attendant, who then offered me a welcome drink. 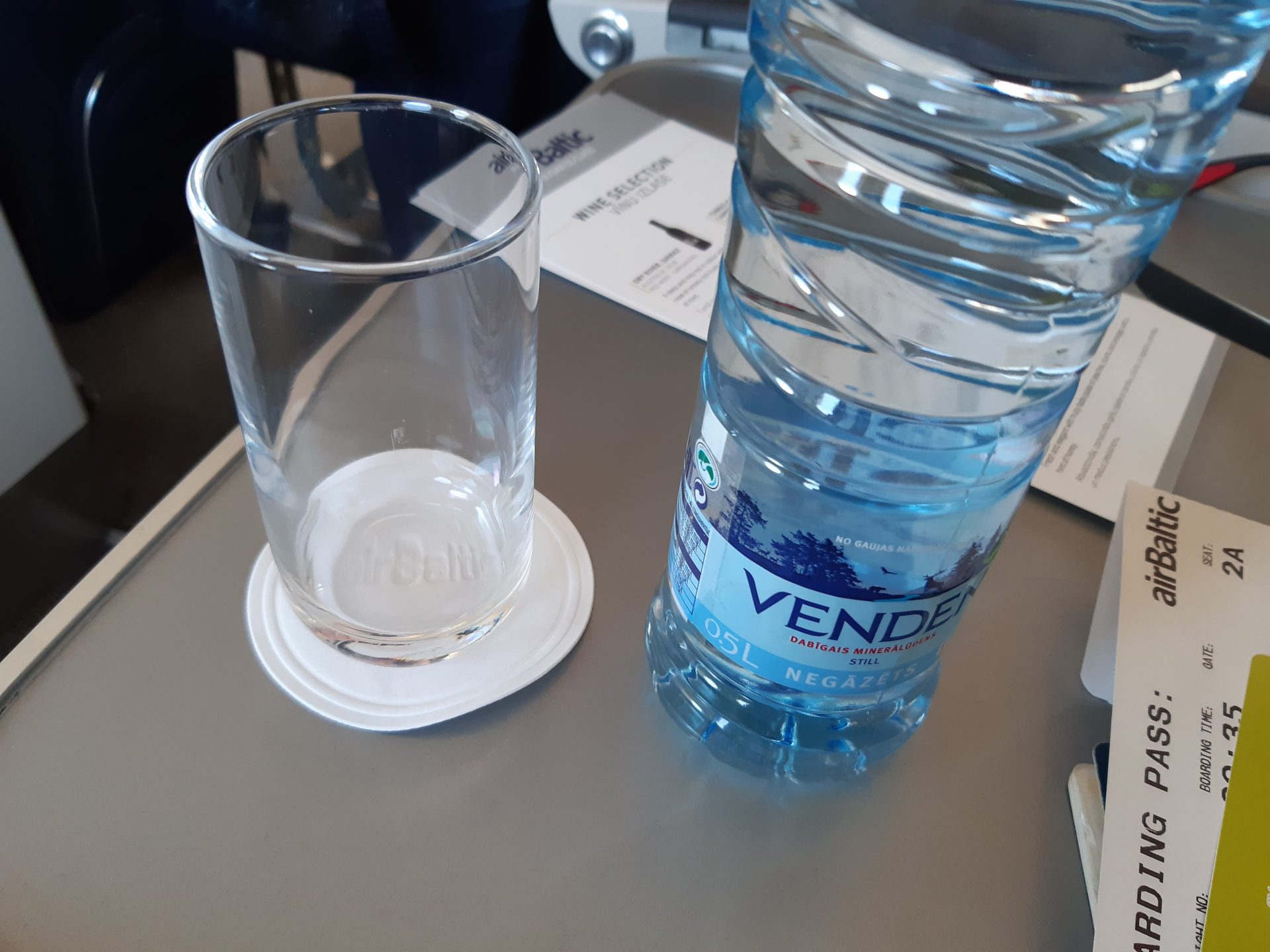 In any case, I was surprised at how wide those seats were. And those windows – just immense. 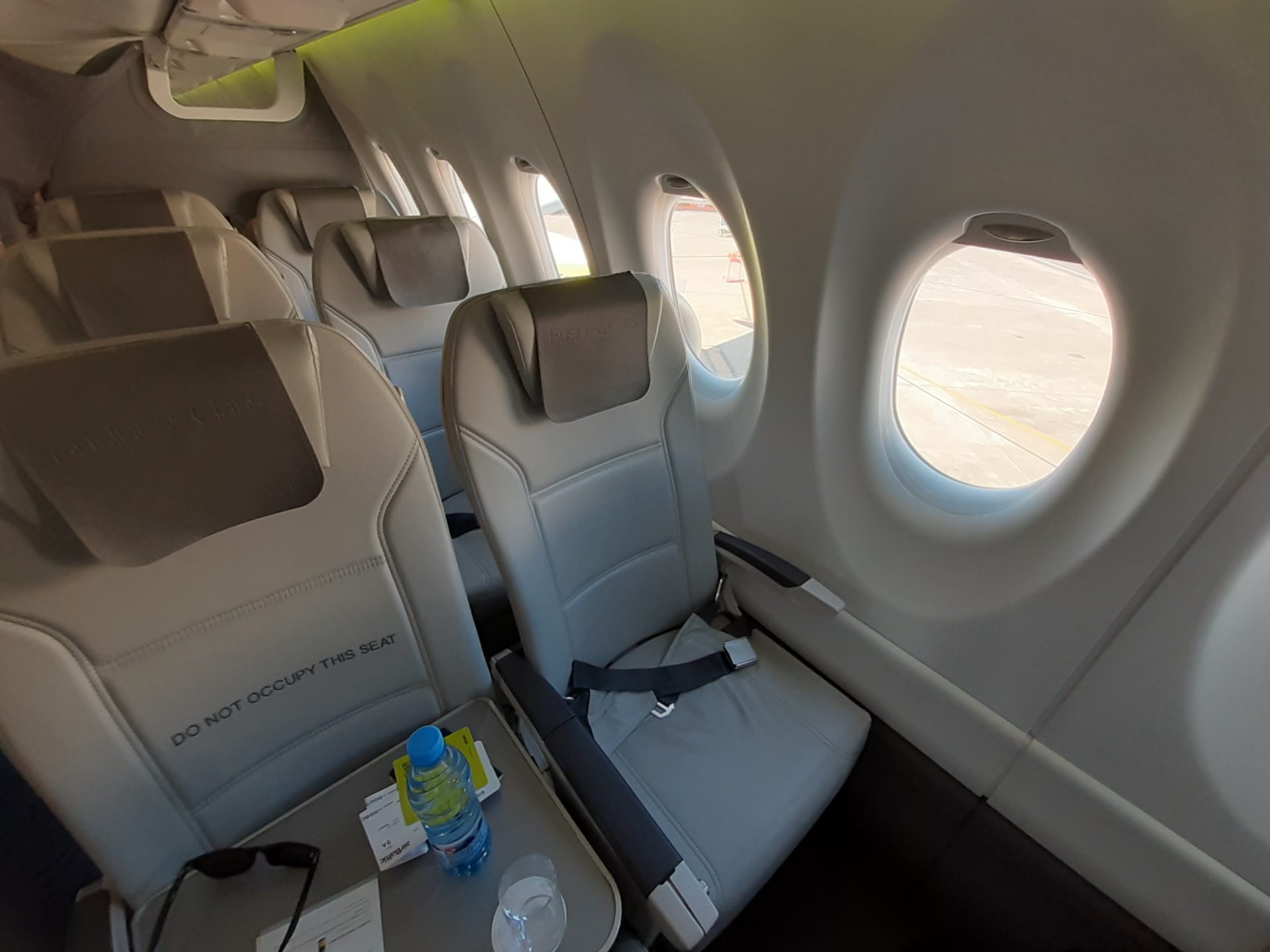 Because the load was light, boarding was quite fast, and at 10h02 doors were closed.

Five minutes later, engines were started, and a minute later we made a long taxi to the active runway. This was followed by a smooth take-off, and it really impressed me how quiet those engines are.

Before take-off, the very cool FA asked if I wanted to be served the food straight away. I said that was okay, and he also presented me the beverages menu. 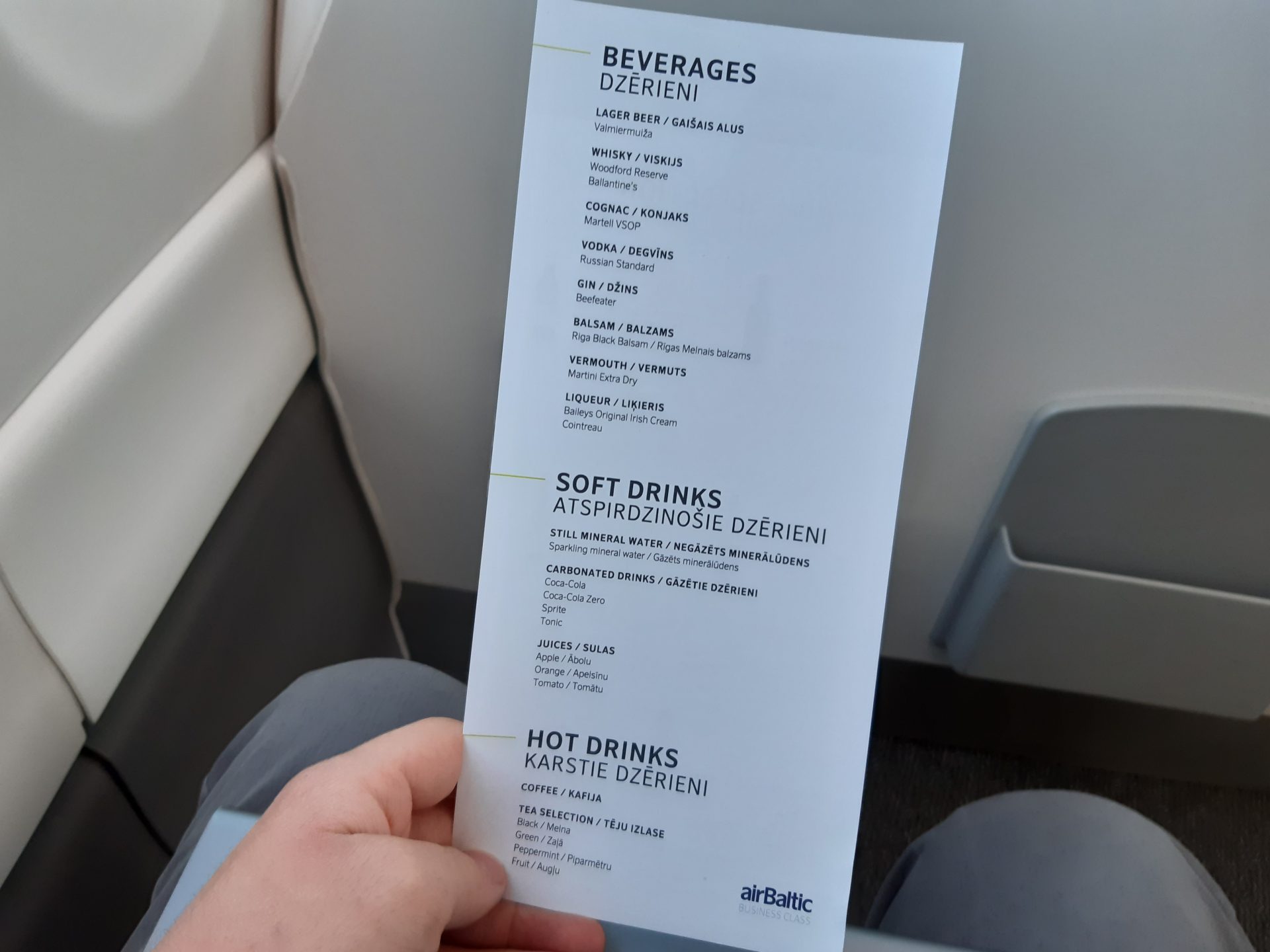 For breakfast, airBaltic offered an omelette. About half an hour after take-off, I was served the full course on a tray.

I really didn’t like that they didn’t remove the wrappings, because the tray table is quite small (so there’s nowhere to put them) and the wrapping in the main course is particularly hot. Nevertheless, quite a good catering service on a three-hour flight like this. 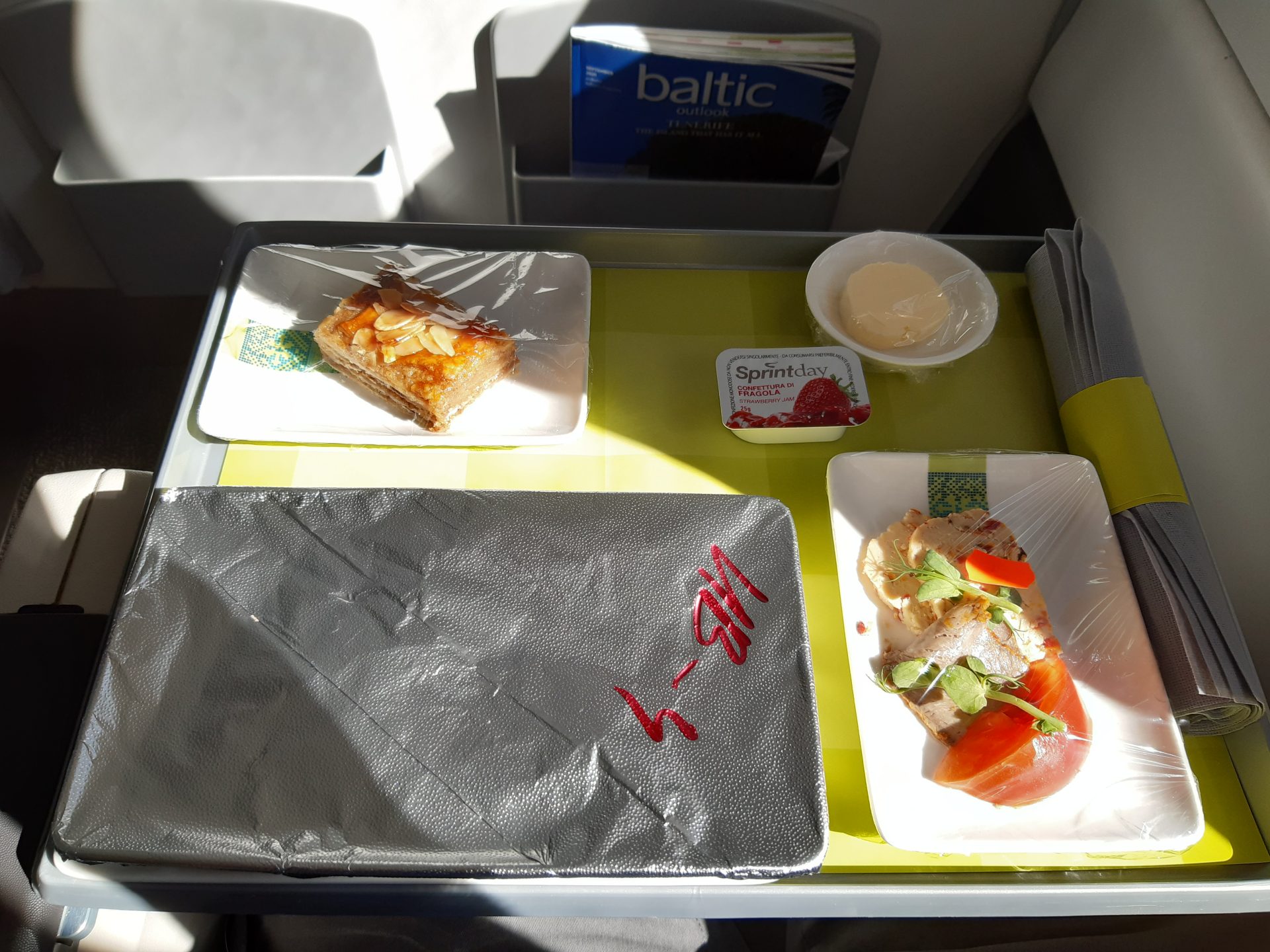 The omelette was especially tasty. Not bad for airplane food. 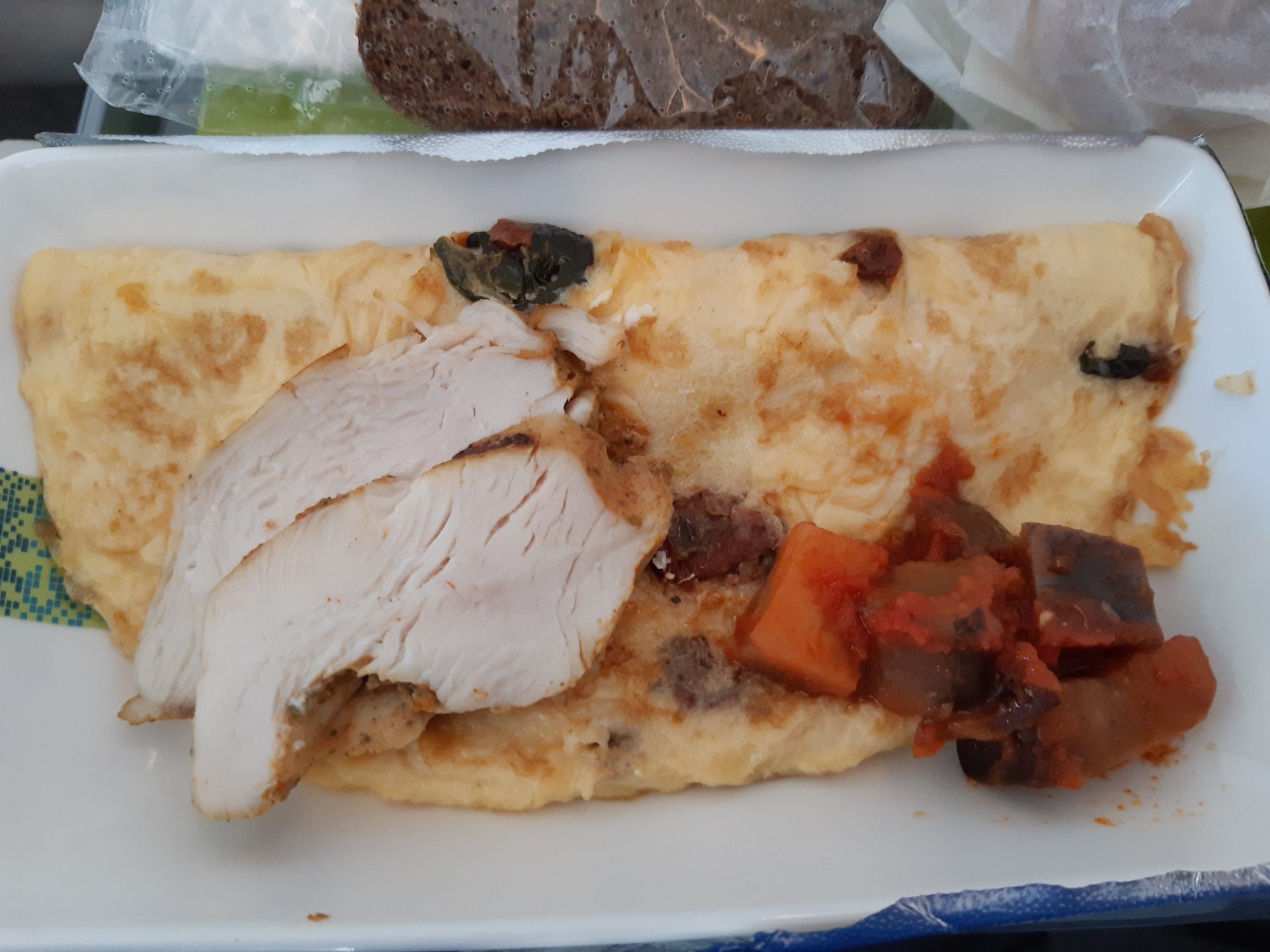 The A220 was impressive from start to finish. Naturally, because I was seated in the first row, I had plenty of space for the legs. 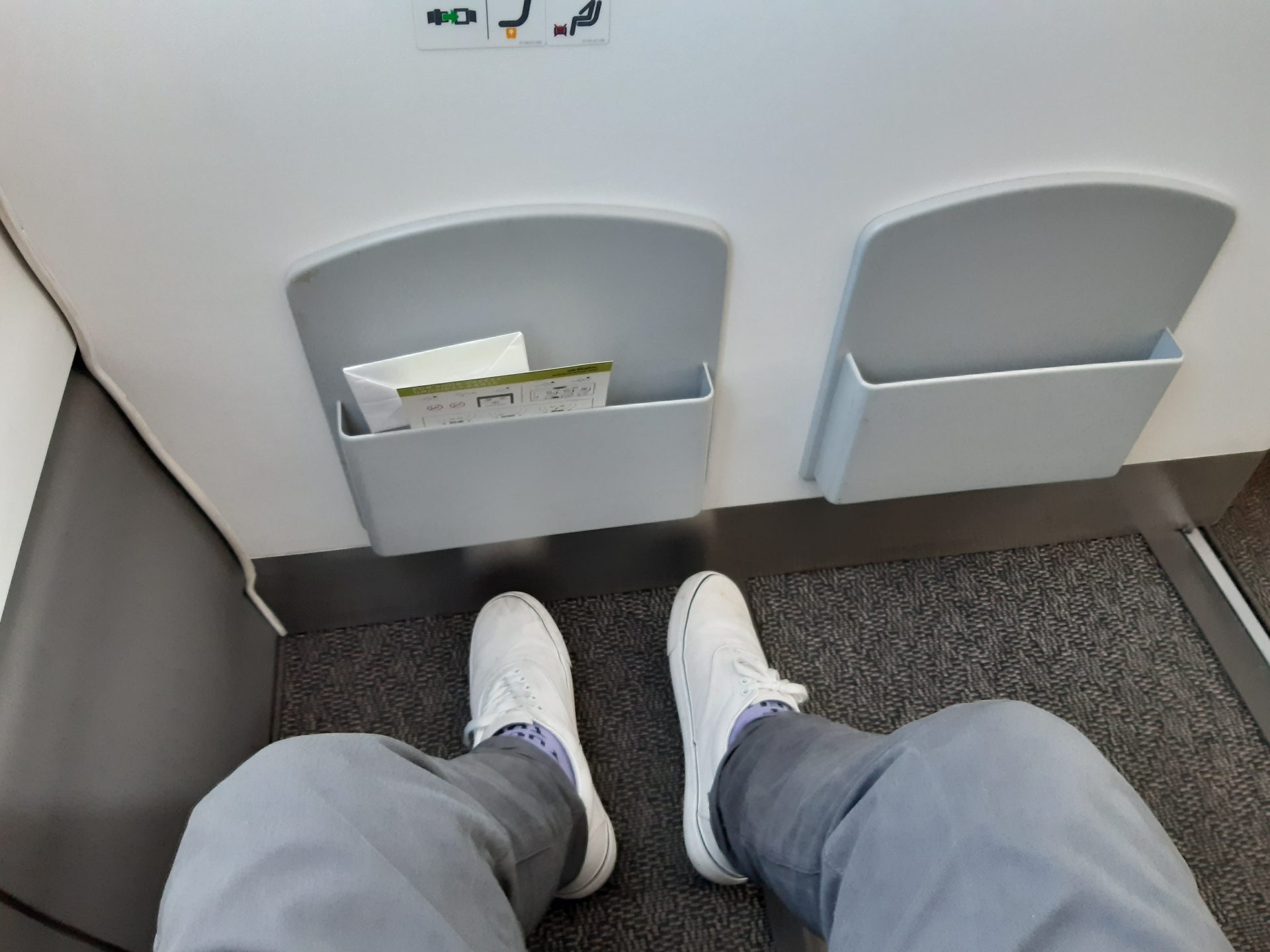 Space for the legs on airBaltic’s A220. (Photo: AirlineGeeks | João Machado)

Looking upwards, the seatbelt sign had a screen, which is quite clever from the manufacturer, and a good advertising opportunity for the airline without bearing the cost of having IFE on each seat. 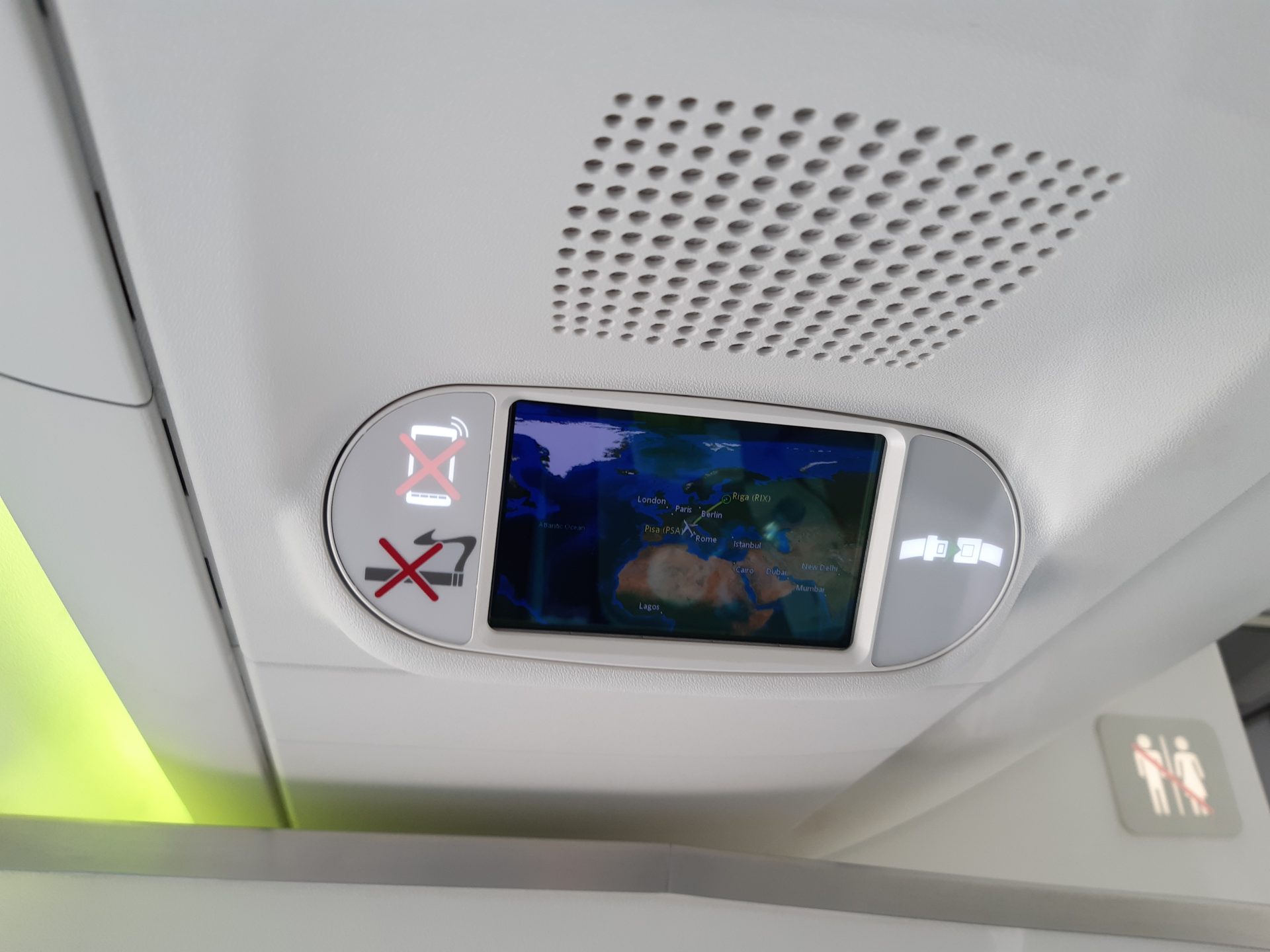 The bathroom was another highlight. While airliners’ bathrooms elsewhere constantly shrinking, I’m glad Airbus – well, Bombardier – opted for doing such a spacious environment. Naturally, with just three passengers in Business class, this lavatory was maintained impeccably clean throughout the trip. 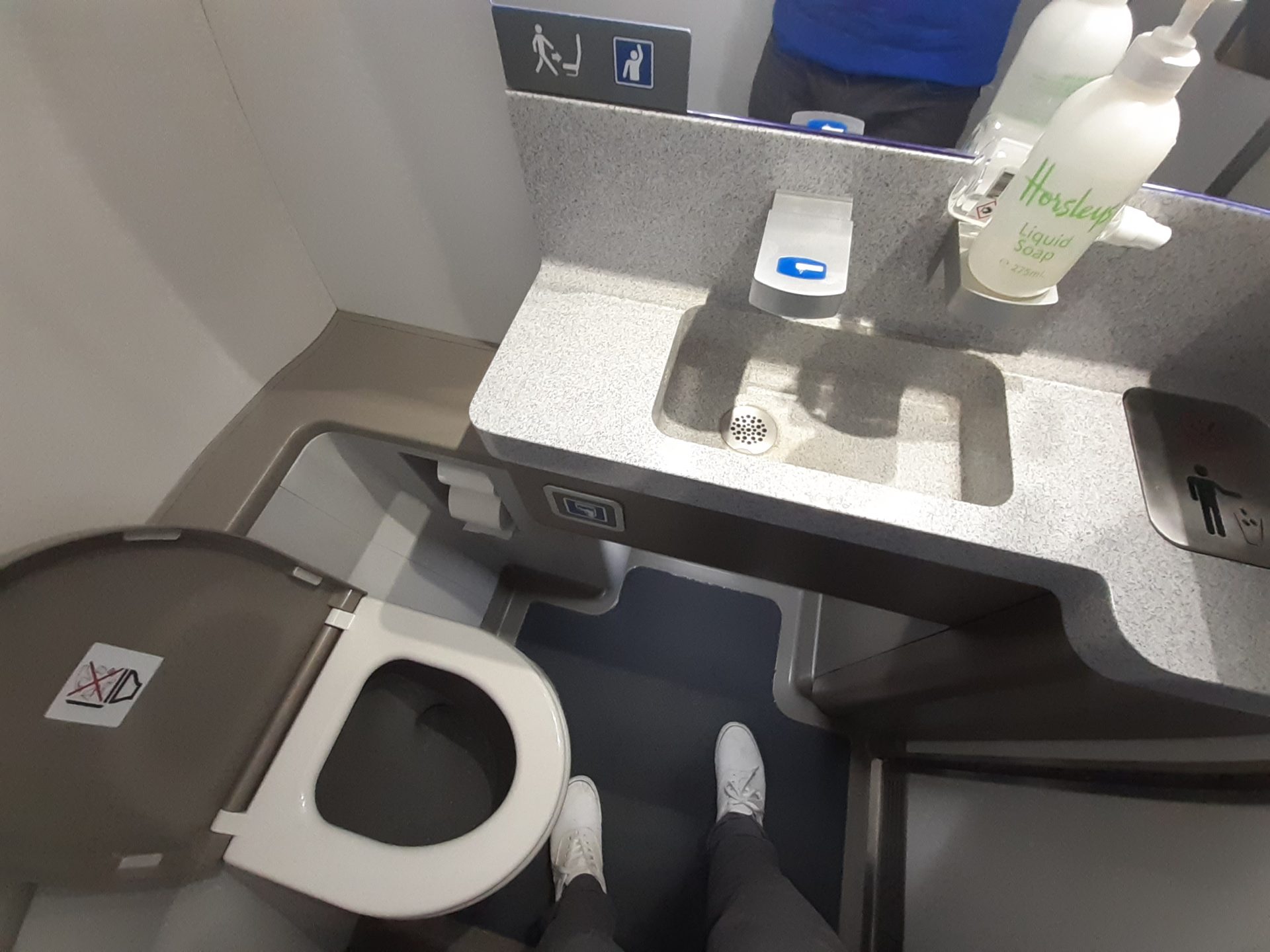 airBaltic also offered some on-demand entertainment on the phone – and the cellphone connection also allowed passengers to purchase products directly through the browser, something I had not seen before in a plane.

Nevertheless, I was more interested in reading the company’s magazine, “Baltic Outlook”, which was surprisingly big and with some interesting reads. It didn’t have that rubbish feeling of airline magazines, which look less like magazines and more like massive advertisements.

Anyway, the flight went on quite quickly and soon we started our descent into Riga.

YL-CSH went on to make an on-time landing at airBaltic’s hub.

Deboarding was quite fast, done via a boarding bridge position (albeit the aircraft did not use it). 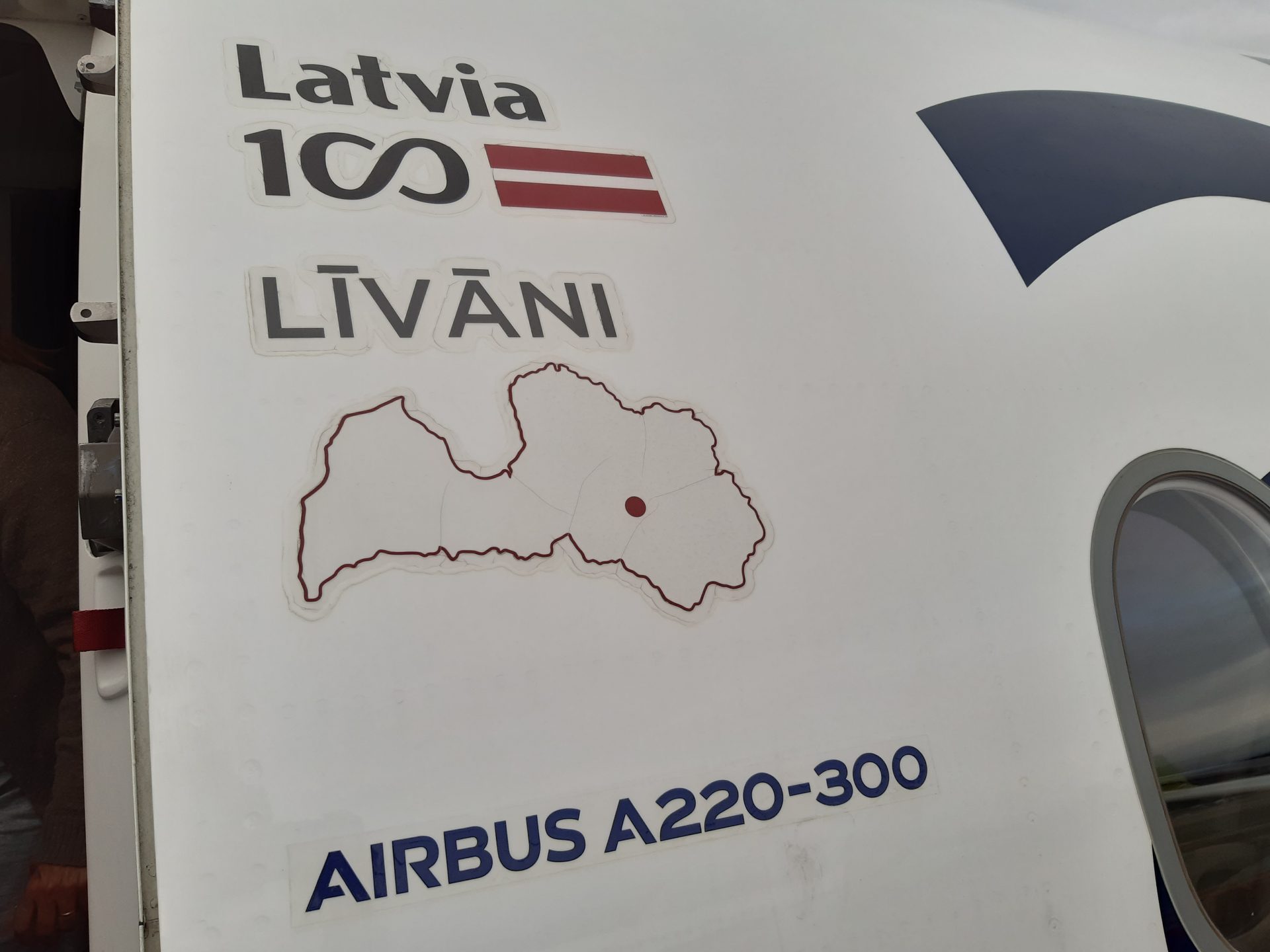 All passengers were redirected straight into the airside, which makes connections so much easier. 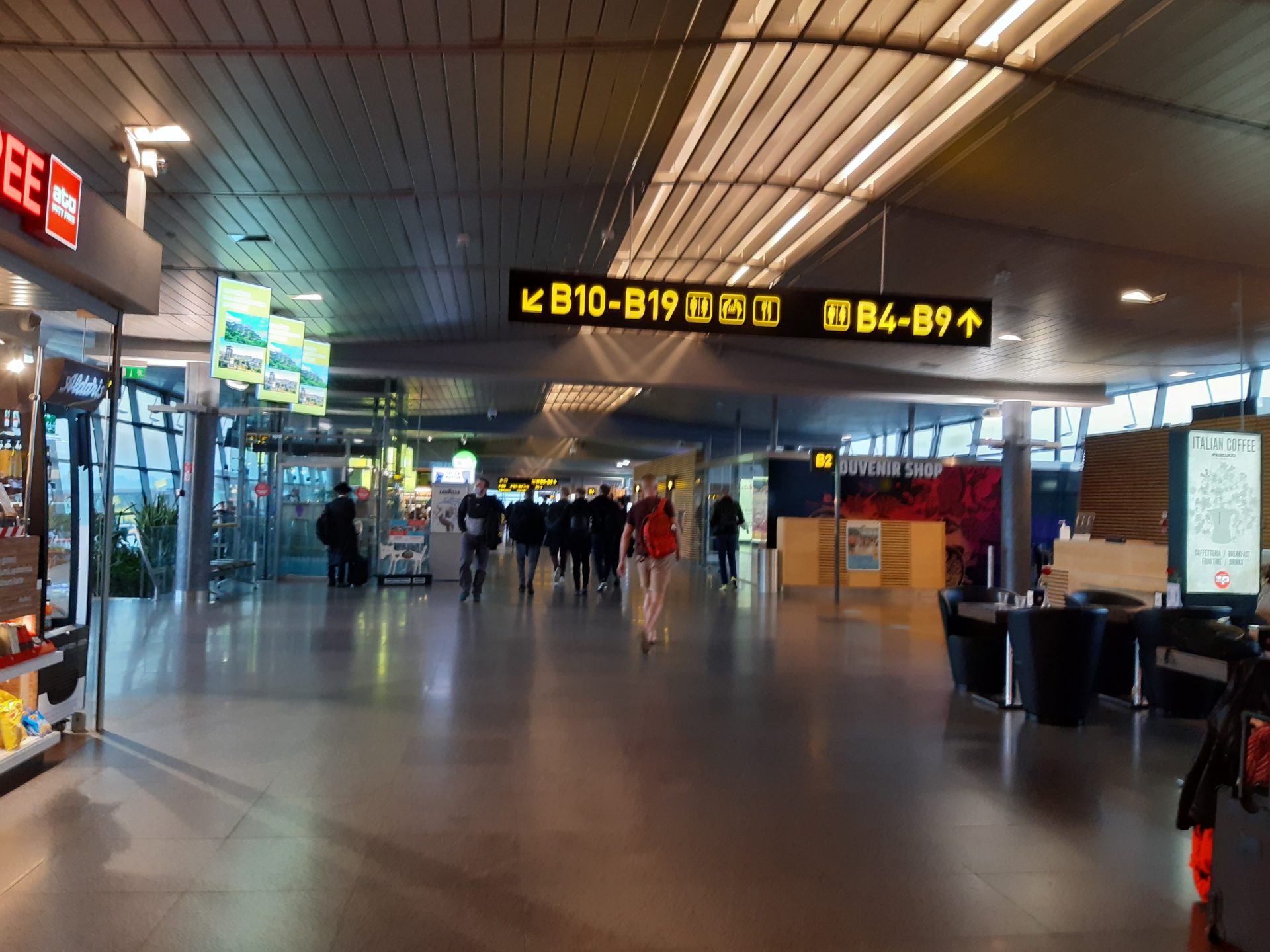 Airside of Riga Airport – photo not taken on the day of the flight. (Photo: AirlineGeeks | João Machado)

I went to the luggage retrieval area and in some 15 minutes, I had my bag in my hands, finishing like this a nice experience with airBaltic.

While I boarded in Pisa without expecting much, I left in Riga quite surprised – positively – with airBaltic’s Business class product. That might well be a Eurobusiness seat, but the A220 makes everything so much better. It’s such a quiet, comfortable and welcoming place.

From airBaltic’s side, I don’t really think they owe anything to the product that Iberia, Lufthansa or any of the big carriers offer. In fact, if they went face-to-face in a given route offering the same price (the competition offering an A320 or something of that sort), I think I’d go for the A220 all the way.

The crew shined through as well – though, as I mentioned in the interview with their CEO, the CEO himself was onboard the flight, so I cannot really evaluate that as being standard.

So a fantastic plane, a good catering and a comfortable Eurobusiness ride to Riga with airBaltic. Kudos to them.