What once started as a single terminal resting under the domes of Minoru Yamasaki might be returning once more as St. Louis-Lambert International Airport evaluates its future needs going forward. The airport recently announced its updated Airport Master Plan during the Airport Commission Briefing on January 5th, taking into account an array of flyers requests and discomforts about the current experience at St. Louis. These polls were run in 2020 and 2021 and were compiled to focus on St. Louis’s current flaws and ways to address them.

The report was created and analyzed by the Technical Advisory Committee (TAC) and Airport/Airline Affairs Committee (AAAC). The TAC is notable for having members ranging from local and national government officials to on-site airport users like rental car companies, passenger and cargo airlines and The Boeing Company. AAAC consists of just airlines, including the recently announced new arrival of Lufthansa.

On passengers’ top priorities were roadway issues and the differences between Terminals A and B. Passengers found that food options and space were inconsistent between the two and even lacked consistency between concourses in Terminal A. Further frustration was met with Terminal A’s concourse-specific security points preventing travelers from accessing shops and restaurants in other sections of the airport.

The airport also noted that the passengers noted issues with parking and road signage. Most of which has been impacted by the airport’s narrow presentation as it fits between Interstate 70 to the south, a Department of Defense office to the west and the existing airport infrastructure to the north and east.

St. Louis’s current airport design is a two-terminal layout with the initial Terminal 1 structure and a Terminal 2 extension. Terminal 1 consists of four Concourses, marked A, B, C, and D, with B and D being shuttered over the last two decades as air service dwindled. The biggest movement came over the last two decades as the loss of Trans World/American’s hub in Concourse C and D was countered with the rise of Southwest in Terminal 2.

This has led to St. Louis’s greatest issue, where space has become a factor. In Terminal 1, the vacated concourses lead to plenty of room for airlines to find growth and have since come to welcome other low-cost airlines like Spirit and Sun Country in recent years. Meanwhile, Terminal 2 has become flooded and is well over its initially planned usage. The airport has converted some of the abandoned Terminal 1 Concourse D into Terminal 2 gates but leaves passengers with a lengthy walk if they need to make a connection. The airport also took into consideration the idea of having Southwest and the Concourse C inhabitants switch positions alongside reopening Concourse D should the demand require it but the funds never arrive.

At the time of writing, St. Louis currently has 54 being utilized by airlines, the largest of which is Southwest with 18. However, the single-sided nature of Terminal 2 makes these gates harder to connect through compared to other airports that offer gates on both sides of the walkway. The airport expects the new terminal would need to have 62 gates by 2040 as the airport expects further growth from airlines on site.

Under the selected plan, the airport would utilize a mix of existing infrastructure and new buildings, with the most notable change being airside. The Yamasaki-designed dome would remain and would serve as the check-in counter like it does today, but would now lead passengers into a consolidated single security screening point on the same level and would eventually lead into a single-linear terminal that would stretch longer than the current span of Concourses A and C today. Arriving passengers would descend down to ground level and walk under the security screening area before making their way to the baggage carousels. 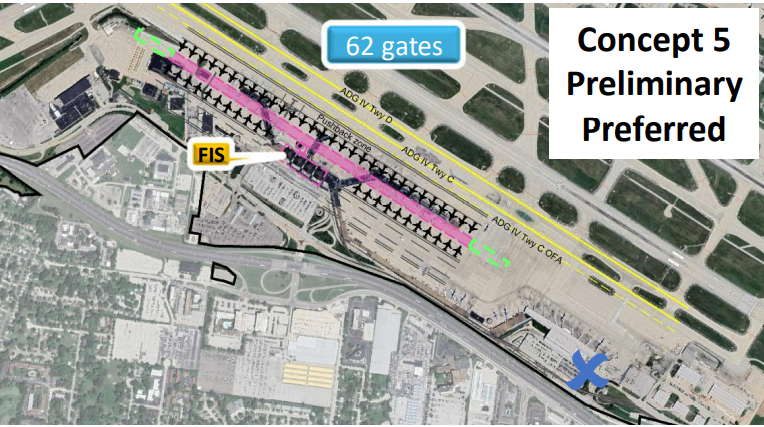 The new terminal would not infringe on any existing taxiways, continuing to utilize taxiways C and D for their entire stretch. St. Louis’s new terminal would require the removal of a hangar and the repositioning of the southern fire station in the process.

For a reference to what these single terminals bring to the table, St. Louis can just look across the state where Kansas City International Airport is expected to open a single terminal in 2023. The terminal consolidates three horseshoe-shaped terminals into a single H-destined structure on top of now demolished Terminal A, saving money on operating costs and building a structure that is more welcoming to passengers in terms of both connectivity and origin/destination.

St. Louis’s previous study in 2012 had also looked into the concept of a consolidated terminal building for all airlines but would not make it a priority since the existing infrastructure was sufficient for the time. Since then, Southwest has stepped up service alongside the arrival of new faces like Spirit, Sun Country, WOW Air and soon-to-touch down Lufthansa. The Dallas-based airline has increased service to the midwestern town to the point it has named it a focus city and has been the driving force as the airport has climbed from 12.2 million flyers in 2012 to 15.2 million flyers in 2019

St. Louis also plans on addressing the other issues that passengers brought up including signage, traffic flow and the Terminal 1 parking garage. The airport is looking into new signage placements and alternative exit ramps from Interstate 70 to combat drivers seeing signage right before their turn. The airport notes how the Indianapolis International Airport has built its terminal to have signage telling passengers about lanes a least one mile before the cutoff. The airport would also like to replace Terminal A’s parking garage as the current structure is nearing the end of its useful life.

Terminal construction is still a long way off, St. Louis wants to run an additional poll this spring to get more in-depth information about travelers walking distances and food choices. The airport must also finish its own internal financial feasibility report before sending it off to the Federal Aviation Administration for approval. Only then can the airport start creating concrete plans to replace the aging infrastructure.

Airport director Rhonda Hamm-Niebruegge noted the potential, saying, “It’s a process so we will see how it will go in the coming months and the coming years but we are very optimistic….if you think about the best of all worlds, [new terminals] have happened in eight or nine years but a more realistic approach of start to finish is usually in that 10- to 11-year mark.”