From canvas to composites, the airplane as we know it has been redefined throughout the history of flight. Yet, despite the Wright Flyer having long faded into obsolescence, the principles of flight remain. Those principles – control, lift and propulsion – comprise a three-legged stool on which all aircraft must stand; it’s a stool that Ampaire understands well.

In the age of carbon reduction, the principle of greatest attention is propulsion. Racing to reduce carbon emissions, engine and fuel manufacturers alike have set their sights on sustainable aviation fuel (SAF) as a replacement for conventional jet fuels. While a positive step, there is a question that must be answered: what next? Ampaire’s Dr. Susan Ying, SVP, Global Operations helped AirlineGeeks answer that very question.

Headquartered in Hawthorne, California, Ampaire has been pioneering electric aircraft since 2016, with its first flight in 2019. Having first attracted this writer’s attention in 2021 at the Society of Experimental Test Pilots (SETP) Virtual Symposium, Ampaire’s objectives lie beyond electric urban air mobility (UAM), focusing instead on the future of commercial aviation. It’s this objective that has defined their approach to developing the technology necessary for electric airlines of the future.

Following a three-phase approach, Ampaire has outlined a plan that it believes will deliver electrified aircraft to the industry in the fastest and most reliable way possible. The stages, aptly defined as ‘today’, ‘tomorrow’, and ‘beyond’, are far from realized; Ampaire validated its first stage in a project collaborated with Hawaiian airline Mokulele Airlines in 2020. 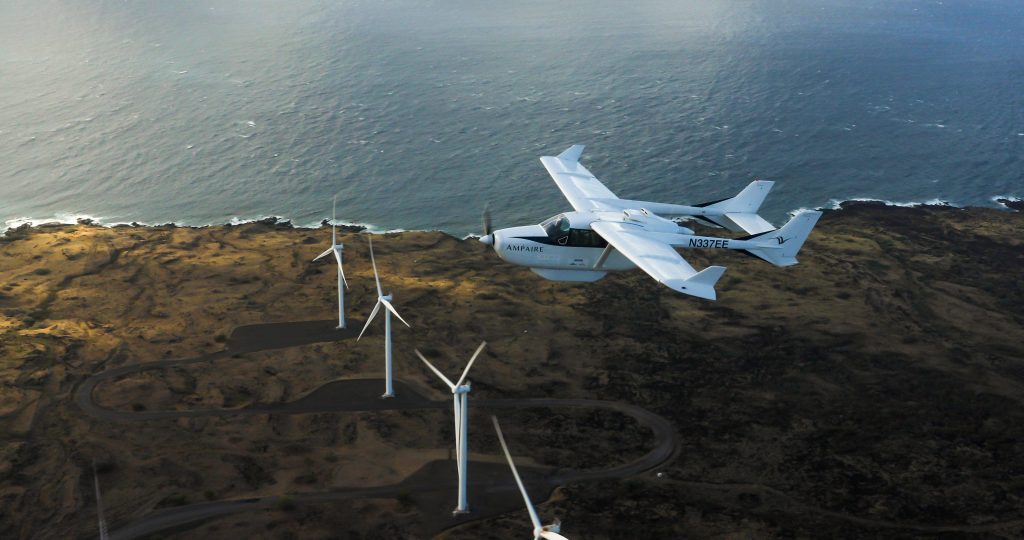 Using a hybrid-electric propulsion system, Ampaire’s Electric EEL – a modified Cessna 337 Skymaster – made history in December 2020 by completing the first-ever airline flight trial along an actual airline route. The route, Kahului Airport to Hana Airport – both in Maui – allowed for the technology to be tested in real-world conditions, complete with weather, community needs, and operational schedule. The aircraft, having flown a total of 22 flights, demonstrated 100% dispatch reliability, while proving that a half-conventional engine and half-electric engine system demonstrated no reduction in take-off and climb performance. 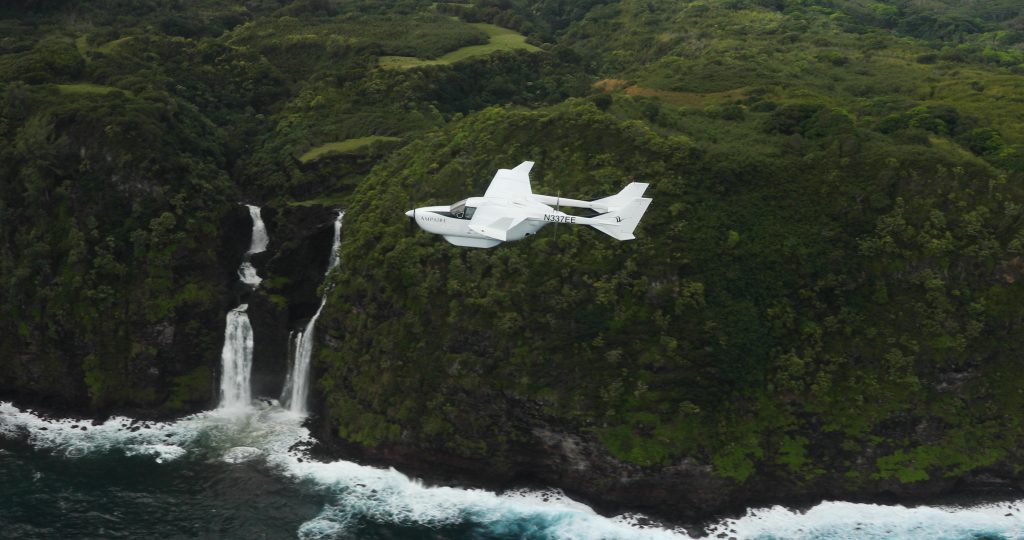 Hybrid Aviation – The Next Step in Commercial Flight

While test pilot symposiums and research are of great interest to the learned Avgeek, the impact is in the application. Dr. Ying answered our questions on how Ampaire is applying that research, and what effect new propulsion technology will have on infrastructure.

AG: Most airlines seem to be transitioning to SAF, but the step to follow this seems to be electric. How is Ampaire leading the way in electric aircraft development? Has hybrid been a more logical approach to addressing future aviation needs?

Ampaire: The best near-term method of reducing harmful aviation emissions is to combine SAF with electric propulsion. Our first commercial product, the Eco Caravan combines a SAF-capable engine with an electric engine. With this combination, we can reduce emissions by nearly 100 percent. We expect to certify this aircraft in mid-2024.

Ampaire is focused on building sustainable aircraft and is partnering with industry stakeholders on sustainable infrastructure for fuelling them. Today that means SAF distribution and charging facilities (although the Eco Caravan will be plug-in optional to allow it to operate anywhere, regardless of infrastructure). We’ve teamed up with Black & Veatch an engineering firm famous for helping launch the Tesla charging network. Together, we’ll assist airports and air carriers in developing electric charging and SAF availability. 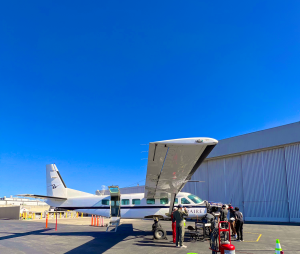 Ampaire: Yes, the Hawaii flights with Mokulele Airlines on Maui demonstrated the feasibility of incorporating hybrid-electric aircraft into scheduled flight operations. We can say the same about our demonstration flights in the UK, working with regional carrier LoganAir plus 16 airports, power companies, government agencies and other stakeholders in the ecosystem. Expanding electrical distribution at airports will require investment, but is far easier than creating an entirely new green hydrogen infrastructure, for example.

Ampaire: Total reliance on batteries limits range capability. Hybrid-electric propulsion removes those constraints and is ideally suited for Regional Air Mobility (RAM). The Eco Caravan, for example, can carry the same payload and achieve the same (or better) range as today’s PT-6 powered Caravan. Our technology testbed aircraft, the Electric EEL, has flown nonstop from Los Angeles to San Francisco and from far north Scotland to the southern tip of England—481 statute miles. We are flying out from LAX to Oshkosh this month, further demonstrating a 1,735 miles flight with recharge stops along the way.

AG: One of the biggest topics that must arise is the financial cost. Is it possible to make electric aviation affordable?

Ampaire: We expect early customers to upgrade to a hybrid-electric system at an overhaul interval. By avoiding the overhaul of a turbine engine, capital investment in the upgrade is limited and the lower life-cycle costs are persuasive. Fuel burn is reduced by at least half and total operating cost by a minimum of 25 percent. These are quite large savings in the airline world, which will translate to more affordable flights for passengers, especially for short-haul flights.  For example, for a 100 nautical miles trip, the total cost per seat per trip of the ATR 72-600 is 5X higher than the Eco Caravan, the Embraer E175 is 7X higher, while the A320neo is 14 times higher!

AG: By what percentage are CO2 emissions reduced with Ampaire’s hybrid aircraft technology?

Ampaire: Depending on the availability of SAF, emissions reduction can range from 86 percent (using the currently certified 50% blend SAF) to nearly 100 percent (once 100% blend SAF is certified and available). These are savings with the Eco Caravan, an upgrade of a current design. In the future, when we can thoroughly optimize a new airframe for hybrid-electric, we expect even greater efficiencies. Ultimately, we will have new designs with advanced aerodynamics, optimized for all-electric propulsion, zero emissions and even more compelling performance.

As Ampaire’s tests highlight, hybrid-electric aircraft is a viable solution – and the next step –  to humanity’s focus on a greener world. Dependable, this technology not only matches the performances of conventional aircraft but offers answers to questions perhaps not initially considered.

According to Ampaire’s website, their technology can “lower fuel by 90%, maintenance by 50%, and noise by 60%.”  For the up-to-date reader, the increases in oil prices and an uncertain global economy are a clear threat to commercial aviation as we currently know it. Therefore, one does not require a proverbial (or literal) PhD to realize the financial benefits for consumers and businesses alike.

While SAF is a positive step forward, more is required, and it’s electrified aircraft that can deliver that ‘more’. Ampaire states: “These tangible environmental, humanitarian and economic benefits make us certain that air travel’s future is electric.”

Aviation’s three-legged stool, while remaining unchanged in principle, will continue to be redefined; technology and advancement demand this. As we fly into the unknown sunset, this seems to be at least one certainty.