In 1991, Eastern Airlines was grounded due to an overflow of problems. Now, 24 years later, the airline is once again starting its engines and spreading its wings. 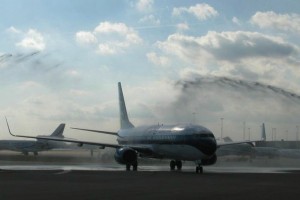 On December 19, 2014, a 737-800 in Eastern’s colors landed at Miami International Airport, which will serve as their hub. This was also their original hub. Upon landing, the airplane received a water cannon salute and a dedication ceremony. It was dedicated to Eddie Rickenbacker, Eastern’s most famous CEO, who served from 1930-1965. It was named “The Spirit of Eddie Rickenbacker”. According to the Miami Herald, the new Eastern’s first airplane was previously owned by Kenya Airways, and is now being modified to meet FAA standards. Eastern has ordered ten 737 Next Generation airplanes, which will be delivered in 2017, and currently owns the purchase rights to ten more 737 MAX aircraft. Also, the airline ordered 20 regional jets from Mitsubishi Aircraft Corporation.

On Twitter, the company itself, among other sources, said that they will be flying an Honor Flight with 60 veterans onboard to Washington, D.C on May 30th. Supposedly, the flight is flying to Reagan National Airport (DCA). 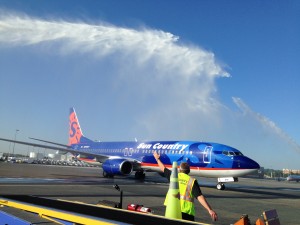 According to Honor Flight DCA, the organization that manages the DCA Honor Flights, Eastern Airlines charter flight 1941, from MIA, will arrive in D.C. around 9AM.

Eastern to fly the Honor Flight MIA to DCA on May 30 with 60 vets from The Greatest Generation.. We are honored and humbled.

As for routes, Eastern Airlines will start off as a charter airline, and hope to have regularly scheduled passenger service within 12-18 months. However, they do plan to support HavanaAir’s operations to begin. According to PR Newswire, Eastern will operate twice daily service to Havana, and weekly service to Camaguey and Santa Clara, for HavanaAir. They will operate 65 monthly flights to Cuba to support HavanaAir’s services, and the two airlines intend to launch services from other US destinations within a couple of months. 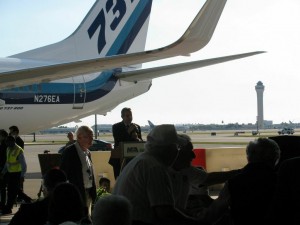 Eastern Airlines is interested in expanding to other destinations in Latin America and the Caribbean in the future. Their frequent flyer program is to be called LatinOnePass, emphasizing their intended route network. One reason Eastern benefits from flying to Latin America is that the IATA has projected that growth in Latin America is much higher than in the US.

According to Eastern’s website, easternairlines.aero, there are two subsidiaries in place to assist in their growth. These subsidiaries are Eastern Shuttle and Eastern Express.

The resurgence of the American icon holds much potential. Former Eastern employees still express a passion for the revived airline, and the recognized icon will surely attract those wanting to fly to the Caribbean and Latin America. As for their competition, they already have a strategy worked out. “In the short term, we’ll try to compete with no one, but in the long term, we’ll compete with everyone,” said Ed Wegel, Eastern’s CEO and founder. Overall, Eastern has a bright future ahead with high potential and high hopes along with a strong and firmly planted passion.