It’s about time for a new aircraft to wear the Cape Air livery. Soon, the Tecnam P2012 Traveller is what you will think of when you hear the airline’s name. Tecnam Aeronautics of Italy has joined forces with Cape Air to produce a nine seater, shoulder wing, twin piston aircraft; the P2012, which will replace the aging Cessna 402Cs starting in 2016. Tecnam Aeronautics (Costruzioni Aeronautiche Tecnam) was founded in 1948, but remained in the shadows of larger competing companies until 2012. From 1948 to present day, the company has successfully produced 11 different models of propeller aircraft with its first jet powered aircraft in development. 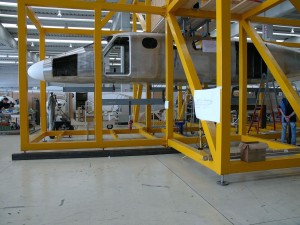 The P2012 in production (Photo provided by Tecnam)

According to Tecnam, the P2012 promises to be “A next generation aeroplane that can deliver not only profits, but reliability, efficiency, and of course passenger comfort.” The aircraft is also capable of operating as a VIP, Paratroop, Medevac, and Cargo aircraft. It is equipped with winglets that increase range by reducing drag while saving fuel. Tecnam chose the Lycoming TEO-510-A1A engines which have yet to prove its reliability.  Also, instead of a conventional round cross section, the P2012 features an angular cross section. The height and width are both approximately five feet thus resembling a square. The P2012s’ small cabin suddenly makes the ATRs’ 13.85m x 2.26m x 1.75m cabin feel spacious.

For the past 11 years, Cape Air has been operating Cessna 402Cs and three (one transferred to Trans Maldivian Airways then Flight Line Services) ATR-42-320 turboprop aircraft. The two remaining ATR-42s wear the Continental Connection livery, and as of November of 2011 operate in Micronesia for United Express. The airline also flies four Britten-Norman Islanders. During the summer, these Islanders are flown around New England and in the winter they serve the Caribbean through a codeshare with United. Currently, Cape Air’s Cessna fleet consists of 83 Cessna 402Cs waiting to be replaced. 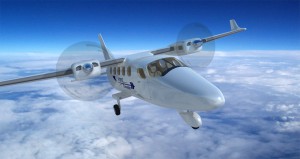 With the aircraft manufacturer’s lack of recent history, there has been some controversy in regards to whether the new aircraft can live up to all of its promises. Tecnam claims, “The Tecnam P2012 Traveller is in a class of its own. Dedicated to providing safe and reliable air travel around the globe, the Tecnam P2012 Traveller is the next generation 11-seat aeroplane. Offering unbeatable value, coupled with low operating costs, innovative design and Italian styling… Bellissimo!” Currently Cape Air is the only airline who has decided to purchase the aircraft, leaving many doubts as to whether or not the aircraft will succeed. Other airlines such as ChelAvia of Russia are opting instead for the older models, P2006T/F.

Tecnam has begun focusing mainly on their new Jet powered aircraft, the P-Jet, highlighted in the fact that the P2012 might be a plane built exclusively for Cape Air and their needs. This is not a new idea by any means, as the Boeing 747SP was also built under the joint request of Pan American World Airways and Iran Air, but would eventually go on to attract other customers. In the end however, only 45 747SPs were built, leaving doubt as to whether the P-Jet will prove to be popular.

However, it is still a bit early to make assumptions. Many VIP aircraft orders are confidential because they are bought by private owners, an area which could generate continued sales. Another reason for growing skepticism about the P2012 is because the aircraft it has suffered a few delays and the first airframe was built only two months ago. If it is expected to fly in 2016, the manufacturer will need to speed up production as it is currently behind schedule. On the surface, it may seem risky to order an aircraft designed by a small company from a clean sheet to replace an entire fleet of 83 planes, but Cape Air is hoping that its unique new aircraft purchase will pay large dividends in its future.

IndiGo Works to Globalize Before Introduction of A321XLR

India’s largest airline, IndiGo has received the go-ahead from the aviation watchdog of India, the Directorate General of Civil Aviation…