JetBlue’s first Airbus A321 aircraft which it took delivery of in 2013. (Photo: JetBlue)

Just two days after United Airlines announced plans to cease all operations out of John F. Kennedy International Airport, JetBlue Airways took advantage of the opportunity by jumping in and quickly announcing plans of adding more flights out of JFK.  These are the exact transcontinental flight routes that United will be terminating.  JetBlue plans to operate nearly ten daily flights to LAX, and six daily flights to San Francisco International.  These extra flights will begin on October 25, the same exact day that United is moving out of the JFK. 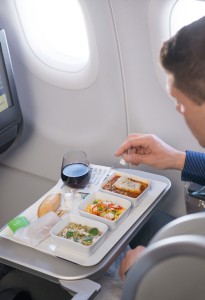 New York’s Hometown Airline plans to launch these flights in style as they in continue to conquer the transcontinental market out of JFK.  Style to JetBlue, is Mint.  Mint is JetBlue’s premium experience currently only available on trans-con flights operating from JFK to SFO or LAX.  However, it is soon to come to Barbados, Aruba, and recently announced Boston. Mint is available exclusively on JetBlue’s Airbus A321 series aircraft.  By February, the airline expects the delivery of more A321s to add to the fleet, allowing them to fill the void for an affordable, premium service out of JFK.

When a JetBlue customer is Mintroduced to all the perks of Mint including but not limited to a speedy check-in, and the chance to dine at 35,000 feet in the air with meals from New York’s Saxon + Parole, the airline is sure they will love it.  Four lucky Mint passengers onboard every flight will get their own suite with their very own door.  The door surprisingly, is not what makes the Mint experience personal.  That job is done by the option of how firm you would like your lie-flat seat cushion, or the handwritten note from the flight crew which all Mint customers receive. 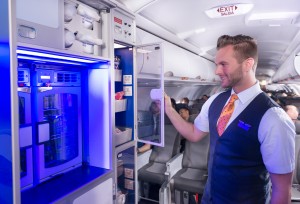 A flight attendant checks out the new marketplace for passengers. PHOTO: Courtesy of JetBlue Airways

And although JetBlue prides themselves in not being a keep-out airline, as they made Mint affordable, they still thought of what their customers flying in the core (economy) experience could benefit from.  The unlimited snacks, and drinks were a staple part of flying JetBlue prior, so the airline contributed to the ability of having that privilege, by inserting their marketplace.  The airline loved the simplicity of allowing customers to get up as they please, and grab a snack or a drink.  They, in addition thought of other basic necessities for a long flight.  The company tried out new seats and installed the most comfortable ones.  To continue, all customers on the A321 can now take advantage of the 100+ DIRECTV channels on a 10.1” screen.  And for those who are in need of keeping up with business emails, or browsing the web for free, Fly-Fi, the airline’s rendition of Wi-Fi that flies is available.  And they continue to add to the basic experience by ensuring that you will never stop being connected through the accessibility of in-seat power outlets. 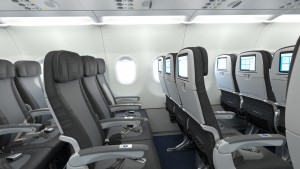 The core seats outfitted with bigger screens, and a drink holder. Also, the most legroom in coach! PHOTO: Courtesy of JetBlue Airways

In the end, JetBlue’s adding of these flights will allow more customers to experience a better ride in the skies, which is overall what JetBlue wants for its customers.  That’s proven through Marty St. George one of the airline’s marketeers who said “we’re thrilled to bring even more Mint customers who want to fly between JFK and the West Coast, [as we have] driven demand for Mint with low prices and the best premium experience in North America.”

American Airlines Reports First Profit Since the Start of the Pandemic

On Thursday, American Airlines revealed its numbers for the second quarter of 2021, posting its first profit since the beginning…

Breeze Airways, an upstart carrier founded by the creator of jetBlue Airways, David Neeleman, has already hit some bumps in…

As Brazil is through its worst phase of the COVID-19 pandemic and the vaccination campaign ramps up, airlines that operate domestically are starting to feel the effect of increased demand. This time, contrary to the shattered hopes and brief rebound of later 2020 (or, as it is called in Brazil,…