Who Deserves to Fly into Dallas-Love Field: The History Behind the Debate

Over the past few weeks, arguments have continued to heat up regarding one simple question; should Delta be allowed to fly into Dallas-Love Field, or be forced to fly only into Dallas-Ft. Worth International? While to some this may seem like an obvious answer to encourage competition, various factors since the 1940s have resulted in an intense rivalry between Southwest Airlines, American Airlines, United Airlines, Delta Air Lines and everyone else in-between.

As early as 1940, American Airlines and Braniff Airways negotiated a deal to build a joint airport between Dallas and Ft. Worth in the city of Arlington. At the time, both Dallas and Ft. Worth were operating separate airports even with their close proximity to each other. However, even after the efforts of American and Braniff, disagreements between the two major cities resulted in a stalled project.

Just as Southwest and American began to take off, the Federal Aviation Administration (FAA) dropped a bomb. The agency decided in 1961 that the government would no longer provide funds to support both Dallas Love Field and Greater Southwest International Airport in Ft. Worth, TX. With Dallas-Love Field reaching its limits, the two cities knew they had to come up with a plan, but again had difficulty finding an agreement. Finally in 1964 the federal government stepped in once again, informing the two cities that if they could not agree on one major airport’s location, then the FAA would decide for them. Fearing for the worst, the two cities came together to purchase land in 1966 in a mutually central location and began construction in 1969.

Originally called the North Texas Regional Airport, the airport was designed for significant growth, enabling it to add up to 13 semi-circular terminals. After its opening in 1973, the airport welcomed in every airline that flew into the area except for one lone wolf: Southwest Airlines. Southwest, at the time being an airline that only flew within the state of Texas, chose to keep its home at Dallas Love Field. The other airlines were not pleased, as Love Field was much closer to the city of Dallas than the new Dallas Ft. Worth International, and therefore would be easier for business travelers to get to. While the original plan was to migrate all airlines to the new airport, Southwest sued to have the right to stay at Love Field and was successful.

While it seemed like a great plan for Southwest, Love Field lost all of its other airlines to Dallas Ft. Worth International. However, winds of change seemed to be blowing once again with the government, and the Airline Deregulation Act of 1978 suddenly enabled carriers that only flew short distances such as Southwest to suddenly fly all over the map without a large regulatory hurdle. At the same time, Southwest was flying a small network only within the state of Texas. Afraid that Southwest would suddenly dominate thanks to its hub at Love Field, major airlines were able to lobby with the help of US Representative Jim Wright to create the Wright Amendment. The Wright Amendment would restrict any flights out of Love Field to only the state of Texas and four neighboring states (Louisiana, Arkansas, Oklahoma, and New Mexico) unless the airline flying from the airport did so with an aircraft less than 56 passengers. The act was intended to promote growth at Dallas Ft. Worth International, but little did Jim Wright know the eventual implications.

With Southwest already being a short-haul service, the airline began to flourish under the new restrictions. It began operating flights all within its restricted area, continuing to use its famous one aircraft type, the Boeing 737. Southwest wasn’t interested in long-haul flights and, therefore, had no need for the smaller aircraft its competitors were utilizing. Flyers across the South were suddenly able to find a great loophole in that a flyer could travel from Dallas to another city with the Wright Amendment’s limits, deboard and collect their bags, and take another Southwest flight elsewhere in the United States. Southwest was beating the system that was supposed to restrict their growth, and again the major airlines began to take notice.

Other airlines began vying for slots into Dallas Love Field, including Continental and Delta, on smaller 56 passenger aircraft. In 1997, the Shelby Amendment was enacted that loosened up the Wright Amendment slightly, adding the ability to fly from Love Field to Kansas, Mississippi and Alabama. Lawsuits began flying in from everywhere, particularly from the city of Ft. Worth which felt as though Love Field was destroying the mutually agreed upon plan to migrate all airlines to their new shared airport. However, nothing could stop the current momentum, and after much negotiation and even an added state to the Wright Amendment approved states (Missouri), a deal had been made.

After much negotiation, Southwest Airlines, American Airlines and Dallas Ft. Worth International all came to a mutual agreement in 2006 to seek to remove the Wright Amendment. However, this did not come without restrictions. Love Field would no longer be allowed to have any more than 20 gates, with Southwest operating at sixteen of them, American with two, and Continental with two, respectively. This plan would last for several years until 2014 when American was forced to give up its two gates to Virgin America in order for the government to approve its merger with US Airways. This was very controversial as several airlines, including Delta, were vying for the two gates. Virgin America was picked due to it being a low-cost carrier. 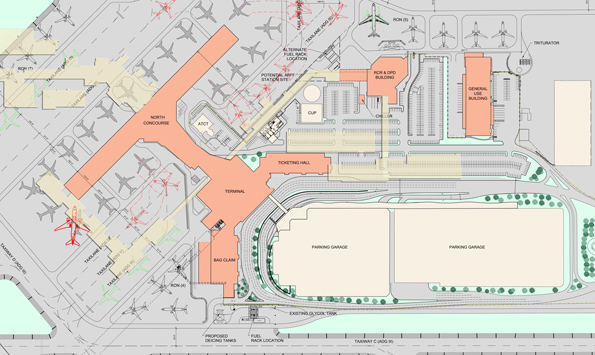 The layout of the new facilities at Dallas Love Field. | Photo provided by LUV Airport

Delta was able to secure a temporary sharing of a single gate with Southwest until September of 2014 after Delta was nearly evicted by the city of Dallas, and was eventually able to share a gate with United instead starting in the beginning of 2015. This deal would be unfortunately short-lived, as United would choose to leave Love Field and return the gates to Southwest Airlines, leaving Delta without its leasing partner. Delta was given until July 6th to vacate the airport and move to Dallas Ft. Worth International along with every other airline flying into the city besides Virgin America and Southwest. Delta was immediately able to put its legal team to work, and began seeking an injunction to not be removed from Love Field.

Suddenly the issue began being tossed around under various jurisdictions, as no one could determine who should be able to decide who flies into the airport. Some argued it should it be Southwest making the decision, since it was the sole owner for such a long time. Others argued it should be the city of Dallas, or maybe even the Federal government. While the issue is still awaiting a court decision, Southwest has agreed for the temporary extension of Delta’s time at Love Field by allowing it to fly through the summer, operating two gates for a total of five flights daily.

Ultimately Dallas Love Field has been an airport for a very long time serving a wide range of customers, ranging from all the carriers in the beginning, to three carriers currently, to only Southwest in between. While the debate will rage on to decide who deserves the right to fly into this airport, it is very evident the importance that Dallas Love Field plays in the aviation world today.

By Land or Sea: A Glance at Bimini Airports’ Histories

Split into two major islands, the pair of Bimini Islands has long been a quick getaway destination for vacationers across…

Qantas will finally commence international flights to London and Los Angeles on Nov. 1, two weeks earlier than initially planned and some 20 months after the Australian government closed the country’s borders. Further destinations will be added from Dec. 18 including Singapore, Vancouver and Fiji. The flights, which will be…

Ethiopian Airlines and Southlake, Texas-based Sabre Corporation, announced they have renewed their long-standing strategic partnership in passenger management systems for…