JetBlue is known for daring to be different.  On Thursday, August 21, 2015 Carly Rae Jepsen helped fulfill that idea and airline’s other value of fun.  She hosted a concert at JetBlue’s flagship terminal at John F. Kennedy International Airport, Terminal Five.  Carly is a Grammy® nominated artist that has made her mark. The first song from her new album, that she released,  I Really Like You became a global Top 40 hit.  The song received raving reviews from fans and top outlets proving to JetBlue that the artist was T5-worthy. 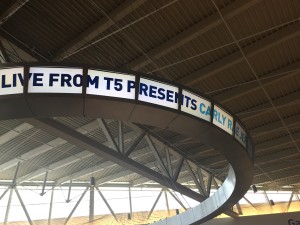 As I learned during an interview with Jessica Wolff, brand manager at JetBlue, the airline is always looking for fresh, talented, and diverse individuals to perform in a Live From T5 Event.  That raised the question: is JetBlue looking for any other talents, or is singing the only talent JetBlue is planning to allow?  With JetBlue being the egalitarian airline it is, Jessica explained that they were totally looking into other talents, but so far they haven’t found anything that would work for their special place – the airport.  One talent they were looking into was a balloon artist or performer.  Unfortunately, that idea was axed due to the fact that passengers wouldn’t be able to bring their new helium friends onboard.

Currently, artists like Jepsen, Ellie Goulding, Aloe Blacc, and bands like The Wanted are what JetBlue is looking for.  They fit the vibrancy that the airline wants to continue to add to the experience; as that’s the whole point of these events – enhancing the JetBlue Experience.  After speaking with a JetBlue intern, I learned that the company would love for passengers to walk into the airport and see a familiar face that they love performing.  It’s a really nice start to a vacation or could lighten up a frantic flier.  If there was anyone in the crowd upset about anything, Jepsen was sure to ease that complication through really nice tunes, and interacting with the crowd.  Everyone rejoiced in the random airport sing-along as some called it.

Following the 30-minute concert, some went back to realizing they were in an airport with weather, delayed and cancelled flights.  So although, JetBlue held the concert on Thursday to let fans hear the music before it was released on Friday, August 21 it turned out to be the perfect date for another reason.  Due to significant delays, and cancellations caused by weather on the East Coast stressed passengers were able to debrief with Carly Rae Jepsen. 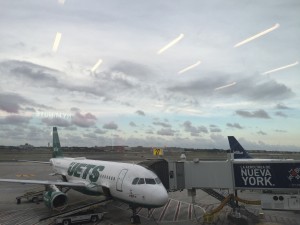 While some went back to traveling feeling a little bit better, some went to the T5 Rooftop: JetBlue’s post-security outdoor space at JFK which is open to all of their customers.  There were about eighty excited youngsters ready to meet Carly.  They won a contest through a partnership with SchoolBoy Records/Interscope and JetBlue allowing them exclusive access to see the post-security show and to attend a meet and greet with Carly. The energy on the rooftop was exuberant as Carly met some of her top fans.  JetBlue has posted all the photos on their Flickr page allowing for fans to download them.  Carly Rae Jepsen closed out the airline’s Summer Friday series of performances.

Be on the lookout for these events, even if you don’t live in or travel through New York-JFK as JetBlue does hope to expand the series out of JFK and into other focus cities, being Fort Lauderdale/Hollywood (FLL), Boston (BOS), Orlando (MCO), and Long Beach (LGB).