In an effort to compete for American customers on Boeing’s home turf, Airbus has officially opened its first factory in the United States. Built in Mobile, Alabama, this brand new 53 acre facility will be tasked with building A320-series aircraft for airlines in North America in hopes of challenging both Boeing and Embraer’s stake in the market. At a cost of $600 million, this is a strategic long-term investment Airbus is willing to make. 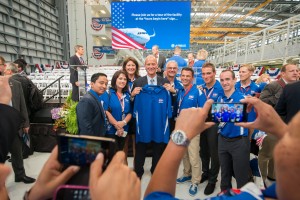 “Our first U.S. facility has been years in the making,” Airbus’ Chief Executive Officer Fabrice Bregier told reporters on Sunday. “It is the most significant, game-changing incident in U.S. aerospace in decades.”

Sources have indicated that Bregier has ambitious plans for the factory, hoping to eventually take 50% of the North American market and strike a blow to Boeing’s long-term hold. Currently, Airbus controls 20% of the market, but with recent deliveries to American Airlines, Spirit and more, Airbus is proving that the United States has the opportunity to become a battleground for the best aircraft in the sky. Two Airbus A321 aircraft were being featured on the line today, and have become very popular choices for American, JetBlue and other major carriers.

Airbus’ other major A320 facility is in Tianjin, China, and is currently producing four aircraft a day for Asia’s rapidly growing aviation market. Each of these facilities are playing an important role as Airbus is hoping to play catch-up with its enormous 5181 aircraft backlog. While backlog in the airplane manufacturing business is a good sign for stockholders looking toward the company’s future, it leaves companies like Boeing and Airbus constantly busy trying to find ways to build more airplanes. 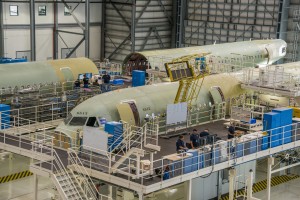 Some aircraft on the line in Mobile (Photo provided by Airbus)

“It’s all about location,” said Michel Merluzeau, vice president for aerospace strategy and business development with consultant Frost & Sullivan. “It’s about where you do business, and how that property is going to grow over time.”

Playing to the aircraft manufacturer’s advantage, building in Alabama comes with several major perks. Airbus will have the option to double the facility’s size if it desires to, and will be utilizing non-union labor that is much cheaper than its current labor costs at its other facilities in France. In addition, the aircraft manufacturer will be having many of its suppliers move to the area, helping spur job growth and hopefully result in greater efficiency and flexibility when needed.

For more than 60 years, Lufthansa has had a tradition of naming its aircraft after German cities, but only less…