Pope Francis waves to the crowd after arriving at Joint Base Andrews, Md., Sept. 22, 2015, after a departing Cuba earlier that day. More than one thousand people were in attendance for the Pope’s arrival. (Photo provided by U.S. Air Force photo/Tech. Sgt. Robert Cloys)

Alitalia, American Fly the Papacy Throughout the Northeast and Cuba

With its biggest hub at Rome’s Fiumicino Airport, Alitalia, Italy’s national carrier, flies to destinations all over the world. However, the airline is very well known in particular for its Papal charters. While Alitalia was able to provide service for the Pope to travel to the United States, they won’t be the only carrier providing service for him.

Many assume that The Vatican has its own aircraft to fly Papal officials and the Pope himself around the world. However, The Vatican does not have its own aircraft, and instead The Church charters aircraft from airlines around the world. Being based in Italy, Alitalia has been the most common over the years. The Italian brand has flown Popes for numerous years, starting with Pope Paul the Sixth in 1964. 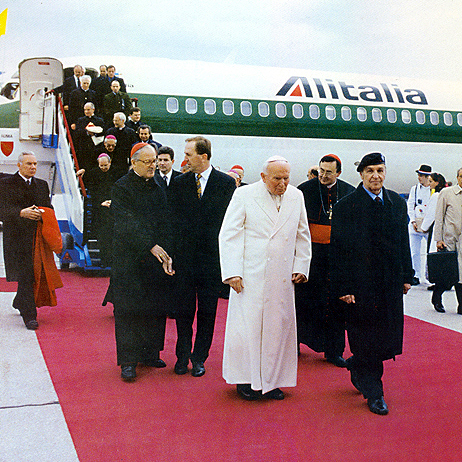 During the Pope’s visit to the U.S., Alitalia will operate two of the papacy’s four flights throughout Cuba and Washington, D.C. The first,”Shepard One,” departed from Rome and arrived in Santiago, Cuba. After spending a few days in Cuba, Pope Francis boarded an Alitalia A330-200 (EI-EJG) bound for Joint Base Andrews outside of Washington, D.C.

After arriving in D.C., the Alitalia A330 headed back to Rome, and it was up to American to continue the Pope’s trip. The Vatican chartered an American 777-200 to continue the Pope’s trip, taking him to New York-JFK, Philadelphia, and then back to Rome. Today, Pope Francis departed from Andrew’s Air Force Base onboard N776AN, a 16-year-old 777-223ER as flight 9420. His first flight within the United States was short – straight to JFK. American will operate the Pope’s flights to PHL and finally back to FCO.

Obviously, the Pope does not get an entire Boeing 777 to himself, as the aircraft is filled with news media, Vatican officials, and security staff. An interesting point to note is that Pope Francis always flies in economy, and allows his papal team and other individuals to sit in the premium cabins.

The Vatican allows news media to join the Pope on his trips, but they must pay a hefty fare and are encouraged to remain with the papal entourage throughout the trip. Despite being a large religious body, The Vatican practices its humbleness by chartering other airplanes rather than owning their own. This simple but important methodology speaks to the persona that represents Pope Francis.

BONUS: Listen to the ATC audio as “Shepard One heavy” arrived into JFK:

LATAM Airlines reported on Monday its preliminary operating results for the month of August 2020, which demonstrate steady progress in…

Avianca announced that on September 1 the carrier will return to the Colombian skies, connecting from Bogotá to destinations such…

Generally when comparing airlines in the United States, one naturally gravitates towards Delta Air Lines. It runs a great operation…