Prior to the blue, red, and yellow Southwest Boeing 737s that currently dominate the skies over the United States, there was another airline that flew colorful jets. Braniff International Airlines, founded in 1930 by Tom and Paul Braniff in Oklahoma, was created for the purpose of transporting mail and passengers up the United States from Dallas to Chicago with service to Tulsa, St. Louis, Kansas City, and Oklahoma City as intermediate stops. The initial flights were operated on Stinson SM-1s and Vega DL-1, with the service being nicknamed “The B Line.” As Braniff got off the ground, it gained traction quickly thanks to the oil boom going on in Oklahoma, allowing Braniff to expand into Texas and throughout the Midwest and Latin America as well as adding larger aircraft such as the Lockheed Model 10 and eventually the Douglas DC-2.

Braniff continued to beef up their route map as larger prop airplanes came into the fleet. The arrival of the Douglas DC-6 allowed for further expansion, as flights to Havana and Lima materialized, and Braniff became one of the largest carriers serving the United States-Latin America market. In 1952, Braniff took over fellow Midwest airline Mid-Continent Airlines and acquired their route map and fleet of Douglas DC-3s and Convair 240s. The merged airline also ordered the Convair 340 to break up their previously all Douglas fleet. Towards the end of the propeller era, Braniff converted a few Douglas DC-6s as well as inheriting several used Curtis-Wright C-46 to create a Braniff Freight division based in Dallas. The creation of the Braniff Freight division along with bigger profits allowed for new routes throughout the United States, and more importantly a new order for Lockheed Electras and Boeing 707s. 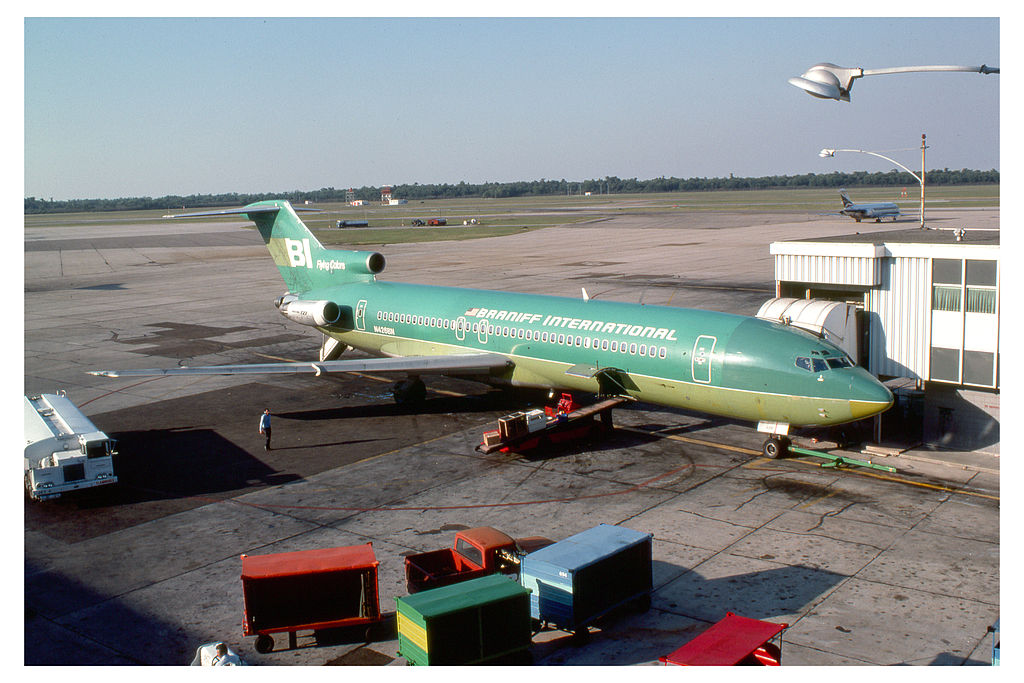 The Electras paved the way to a more intense route map with Braniff operating all along the Midwest and East Coast, as well as commencing service to Seattle and Portland. Braniff officially entered the jet age in 1955 with the arrival of the Boeing 707, which quickly gained the nickname of “Super El Dorado Jet.” This new aircraft would go on to operate routes between Dallas, New York, and Chicago, while later jets would operate the long-haul flights to South America. The second jet aircraft added was the BAC 1-11 and operated state-wide flights inside Texas as well as routes up through Oklahoma, Kansas, Missouri, Minnesota, and Iowa.

The mid 1950s also saw the largest rebranding an airline had ever done, with Braniff bringing in Mary Berg Wells, Emilio Pucci, and Harding Lawrence to rebrand the airline to be more recognizable to passengers. Almost instantly the decision marked the “End of the Plain Plane,” as the airline logo was transformed from red and blue “Fly Braniff” surrounded by stars to a block “BI” with “Braniff International” being written underneath. The aircraft fuselages and ground equipment were painted into seven different yet specific colors which were beige, ochre, orange, turquoise, baby blue, medium blue, and lemon yellow. Aircraft had black noses and white tails with BI and the American flag on the tail, and the words “BRANIFF INTERNATIONAL” were printed throughout the length of the fuselage in black.  Emilio Pucci created new colorful employee uniforms specifically around being colorful and interchangeable depending on the weather.

Braniff continued to update their fleet with the arrival of the Boeing 727, which quickly took over the majority of domestic flights as well as a few Caribbean and Mexico routes. The Boeing 727 helped modernize the Braniff short and medium haul fleet and led to the removal of the aging BAC 1-11s. This was coupled with the arrival of the Boeing 747 for Braniff, who utilized the lone 747-100 they received on a flight between Dallas and Honolulu. The original Braniff 747, known to many fliers as the “Queen of the Skies”, was given multiple different nicknames, including “Big Orange”, “The Great Pumpkin” and “747 Braniff Place” due to its all orange fuselage. Other Boeing 747s were later ordered, including updated versions of the aircraft such as the 747-200 variant and 747–SP variant which were quickly utilized on longer trips to Honolulu and new routes in Europe.

Braniff saw change once again in the late 1960s with the introduction of a two-tone livery. The introduction of a blue-light blue, red-yellow, and green-light green livery fuselages with colored tailed quickly replaced the old one-color planes. The “BI” on the tails and “BRANIFF INTERNATIONAL” on the fuselages however remained. Emilio Pucci was recruited to assist once again, and was able to help develop new uniforms for flight attendants that were based on the two-tone livery. During this time the Douglas DC-8 replaced the final Boeing 707, and the Electras were phased out of the fleet as well. Braniff also made a bold decision to move operations from Dallas Love Field to the newly built Terminal 2W (present day Terminal B) at Dallas/Ft. Worth International Airport, allowing for further expansion to occur.

Braniff stabilized for most of the 1970s but slowly started to slip into the red as American Airlines began winning over travelers in the Dallas area. The addition of low-cost carrier Southwest Airlines into the Dallas area made it even more difficult for Braniff to turn a profit. In 1977, Braniff made an effort to gain popularity by rebranding once again, returning to a one-tone livery with alternate colors on the edges. Aircraft interiors were given tan color, with seats, floors, and even flight attendant uniforms being given a tan makeover, officially ending Emilio Pucci’s multicolored uniforms. Braniff also operated the famous Concorde for a short period of time, with flights being operated on Air France and British Airways airplanes but given a US registration and Braniff flight crew. Flights between Washington D.C. and Dallas started in 1978, but were quickly suspended after failing to achieve any monetary gain. Even though Braniff was flying the aircraft, due to their agreement, the Concorde would never wear the Braniff colors. 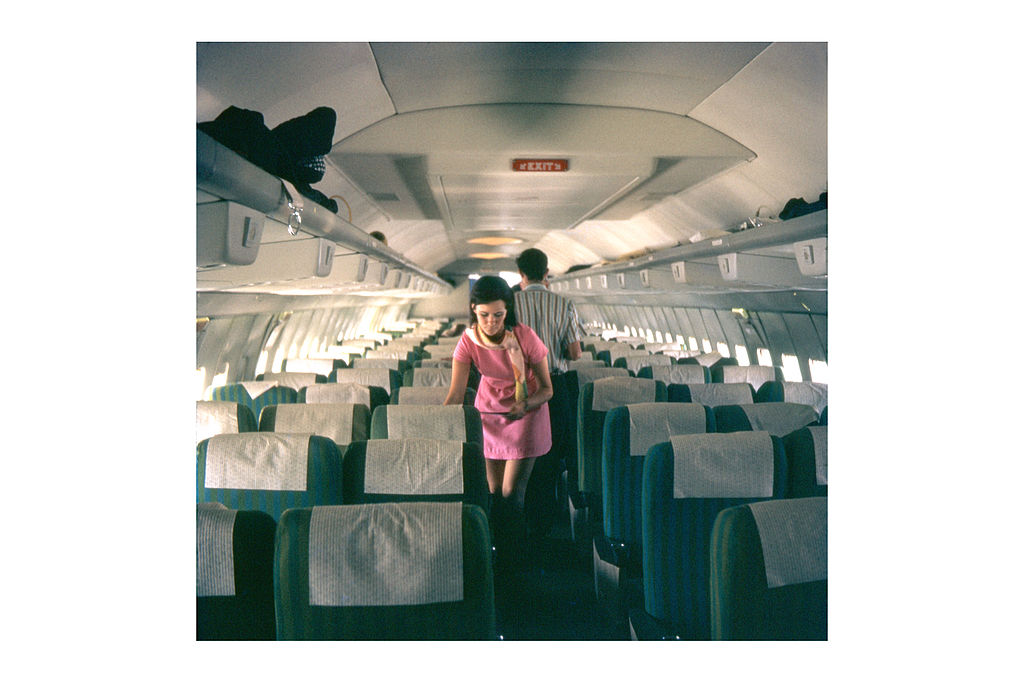 Photo of a Braniff flight attendant in her colorful outfit. Photo courtesy of By clipperarctic (Stewardess 707 Uploaded by russavia) [CC BY-SA 2.0 (http://creativecommons.org/licenses/by-sa/2.0)], via Wikimedia Commons

Braniff’s rebranding didn’t help their public image, and by 1980 the carrier was quickly losing money and interest from the Dallas public. A fuel crisis added to Braniff’s woes, and competitive pricing from Southwest and American kept Braniff from winning over the low-cost consumers. Braniff quickly cut both European and domestic routes from the map in order to help the carrier save itself from implosion. Braniff’s reduction was able to slow the financial bleeding, but it was hurt again when the air traffic controllers went on strike, grounding the slowly dying airline. By the time Braniff emerged from the strike, the carrier was destined for bankruptcy. On May 12, 1982, Braniff announced that they were suspending all service, owing upwards of $730 million in debts. The last Braniff flight was flown on Braniff’s original 747; “Big Orange,” which arrived at Dallas-Ft. Worth from Honolulu on May 13th to an empty Terminal 2W.

Braniff would never returned to the skies, and although various attempts were made to relaunch Braniff, none would survive very long. Even though it no longer exists, the original Braniff still has many landmarks that still can be found around the airline world today. Braniff’s original hangar and half of Braniff’s terminal at Love Field are still standing, with the hangar to be turned into a auto dealer’s showroom and the terminal’s fate still unknown with the new Love Field terminal redesign. Braniff’s headquarters at Dallas-Ft. Worth International Airport is still standing too, located behind the American Airlines hangars off Airfield Drive west of terminal B, where Braniff operations existed for its final years. Multiple aircraft from the airline are still active or preserved, with many of the old Boeing 727s being used at various colleges and airports for fire training. Roush Fenway Racing of Concord, North Carolina also operates one Boeing 727 (N422BN) that dates back to the original Braniff. Although the carrier that ended “the plain plane” is long gone, it continues to leave small token reminders of its once great legacy.