The Metrojet Crash, A Week Later

On October 31st at 04:13 UTC, Flight 7K9268 operated by an Airbus A321-200 (EI-ETJ) for Metrojet between Sharm el Sheikh to St Petersburg carrying 217 passengers and 7 crew, disappeared from radar while over the Sinai Peninsular in northern Egpyt. A few hours later, 50 ambulances that were dispatched to the region came across the wreckage some 60 nautical miles south of Al-Arish, directly below the last known radar position. Upon entering the wreckage site, the aircraft was found split into two main parts with the tail section 1.2 nautical miles south of the main fuselage wreckage. 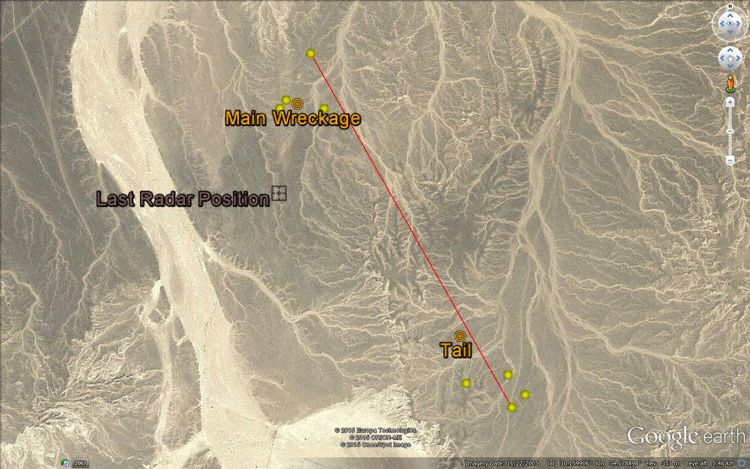 Following the announcement of the crash, Lufthansa and Air France announced they were going to avoid flying over the region until the cause of the crash had been determined. Both the Federal Aviation Authority (FAA) and Germany’s CAA had previously issued warnings to its American and German operators respectively to operate above FL260 while flying over the Sinai Peninsula.

At the time of radar loss, the aircraft was flying along airway UL550 between waypoints TBA and PASOS, Eurocontrols’s Air Flow Traffic Management (CFMU) issued a notice to all flights operating between the two waypoints and vice versa that due to ‘technical problems’ all flights were to be tactically rerouted via MELDO. The notice was removed a few minutes later with the airway operational throughout the day.

Towards the end of the day, at around 19:00 UTC, CFMU issued a statement to all aircraft operators that the point PASOS in the LCCC (Cyprus) FIR (Flight Information Region) was not available for flight planning with any future flight plans filed including the waypoint would be rejected. After the statement, movements along UL550 ceased with the greater Sinai region becoming empty with traffic being rerouted around the Sinai Peninsula via Cairo. The restriction for PASOS was withdrawn on November 2nd.

On November 1st, Rostransnadzor (Russia’s Ministry of Transport) ordered the airline to suspend all its A321 operations pending the investigation.

Shortly after the accident was confirmed, the terrorist organization named ISIL (Islamic State of Iraq and the Levent) uploaded a video to their Twitter account showing a burning object falling from the sky, claiming responsibility for the disaster. The claims were swiftly dismissed by many involved in the initial aftermath including Russia’s Transport Ministry who said the video was not credible and fabricated.

The Aircraft and Crew

The aircraft was built in 1997 and was powered by IAE V2533 engines and had accumulated approximately 55,772 flight hours in 21,175 flight cycles. The captain, Valery Yurievich,  had over 12,000 hours with 3,800 on type. The first officer on board was Sergei Trukachev.

In 2001, while being operated by Middle East Airlines (MEA) as F-OHMP, the aircraft was on approach to runway 05R at Cairo airport when the aircraft began oscillating around the glide path resulting in manual corrections by the crew, this resulted in a hard landing and a tail strike at touch down, causing substantial damage. The chairman of Metrojet said in a press conference the repair was done by Airbus.

Following the crash, reports circulated that a potential decompression occurred in the fuselage causing the aircraft to come down, with the tail strike as the likely cause. Whilst this isn’t the first to have happened (Japan Airlines Flight 123 crashed into a mountain seven years after the aircraft suffered a tail strike) airline officials ruled out mechanical failure.

Inspections carried out by Russia’s regional transport prosecutors concluded the fuel quality that the aircraft had onboard met required standards.

On November 5th, the British Foreign Minister,Philip Hammond, stated that based on intelligence from the UK and the USA there was a significant possibility that the aircraft was downed by some kind of explosive device. Following the announcement, UK airline Monarch cancelled all flights to Sharm el Sheikh up until at least the 12th November.

EasyJet also followed with cancellations up until the 12th with flights from Sharm el Sheikh operating as usual but with extra security measures. On the 6th of November, EasyJet announced that 9 empty aircraft will travel to Sharm el Sheikh to bring home around 1,500 passengers. Passengers travelling back from the resort will only be permitted one piece of hand luggage containing essential items to come on board, with hold luggage to be brought back via a government agency and delivered to the passengers home within 7 days. the decision to ban all hold luggage indicates that the British Government is convinced the A321 was brought down by an explosive device.

On November 4th the Egyptian CAA Accident Investigation Authority confirmed the successful readings from the flight data recorder which is now being assessed by the investigation team. The cockpit voice recorder was discovered among the wreckage extremely damaged and would need repairs to extract the data from it. On November 6th, sources close to the investigation released to various media outlets that an explosion was heard on the cockpit voice recorder. Following this development, a mechanical fault was ruled out as the cause of the accident.

On November 6th at 10:10UTC EasyJet flights destined for Sharm el Sheikh to return UK tourists was suspended by Egyptian authorities. However, according to BBC, two EasyJet aircraft that are currently at Sharm el Sheikh airport will return to the UK.

Following a 10 minute conversation between British Prime Minister David Cameron and Russian President Vladimir Putin, Russia cancelled all flights to and from Egypt.

Over the past 24 hours, a handful of British holiday makers have said that they were offered the chance to skip the security queues at the airport for a small fee. One holidaymaker said he was approached by a man in military uniform who held a £20 note, stating that if he had one then he could skip the queue for baggage checks. Reports summarised the security issue overall as ‘unprofessional’ following reports of security personnel accepting bribes.

The Egyptian government responded furiously claiming the accusations were too premature and damaging.

Following the developments over the past week. The British Government has left little doubt over its position believing the aircraft was brought down by some kind of explosive device, the suspension of flights between Sharm el Sheikh and the United Kingdom highlights this belief, especially with the new baggage restrictions.

San Francisco-based Boutique Air is once again in the news. The carrier has expanded aggressively lately, and they certainly didn't disappoint with this announcement. Including the three new destinations in this article, the number of cities started by the carrier since August will be 11. AirlineGeeks got the opportunity to…