How Some North American Airlines Play “The Name Game”

No two aircraft are alike, and while every carrier can showcase this fact by slapping a registration number on the aircraft and recording the airplane’s manufacturing number, some take it a tad bit further. In this series we will look into the airlines that take individualizing each airplane to the next level. Individual aircraft and special liveries like American Airlines’ retro schemes and Delta’s “Spirit of Seattle” jet will not be counted since they are one off aircraft. From animals to World Heritage Sites, this is how aircraft earn their names.

From the beginning of Frontier Airlines in 1994, the carrier has always made sure its animal tails were the center of attention. The airline has always made sure to include the animals in marketing, which peaked in the mid to late 2000s with numerous advertisements. Frontier’s TV commercials focused on the animals talking, with characters including Jack the Rabbit, Grizwald the Bear, and Sal the Cougar holding conversations from the tails of Frontier aircraft at Denver. Others have been used to create marketing ploys, including Frontier’s EarlyReturns program. Frontier has held contests to determine Frontier’s newest tail, with everything from a chipmunk to a dung beetle being offered before “Polly the Parrot” won the event. Frontier has always let you know what the animal’s name is with a poster in the main gallery welcoming you aboard with the animal’s name and species listed. 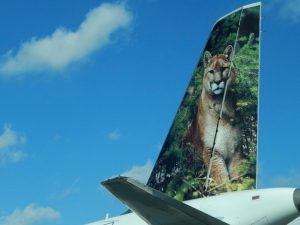 Changing hands from Republic Airlines to Indigo Partners, the amount of “spokesanimal” ads have dropped in favor of more generic flight deal jokes such as “This Deal is Un-bull-ievable” and “Fares so low….they’re Un-Frog-ettable.” However, Frontier has continued to emphasized the animals on the aircraft. A rebranding in 2014 saw the animals become larger and for the first time their names were put on the nose. As Frontier has switched out aircraft from smaller Airbus A318 and A319s to larger A321s and A320s, some animals have been more fortunate than others with “Grizwald the Bear” moving from an A318 to A320 while others such as “Lucy the Canadian Goose” disappearing altogether once the animal’s Embraer ERJ-190 was retired.

Being isolated in the Pacific Ocean, the Hawaiian islands have always relied on air travel as the fastest way to reach Asia, Australia, and the Americas. The collapse of Aloha Airlines in 2005 cemented Hawaiian Airlines as the main carrier for the islands and the airline returns the favor by trying to promote the Polynesian feel of the islands with their aircraft. Besides the vibrant purples and reds of their aircraft, Hawaiian also names their aircraft in Polynesian terminology. 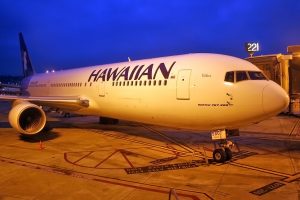 The Boeing 767s and Boeing 717s share the same themes with the fleet being named after the birds of the islands. The names appear between the cockpit window and forward door. The two sides are identical, with the bird’s name being written in Polynesian with examples being the ‘Akikiki, Nēnē, and “Oma’o.” However, Hawaiian has slowly been retiring the Boeing 767 fleet as a newer fleet of Airbus A330s take over the longer flights. The A330s are not named after birds but instead are named after the Polynesian constellations. The 23 A330s in Hawaiian have names like Keali’iokonaikalewa, Hōkūpa‘a, and Tutukamolehonua and follow the design of the bird themed aircraft with the name appearing between the cockpit windows and forward door.

The Kid and The Plane: FedEx

Federal Express or FedEx for short has the largest cargo fleet of any airline in the world, and each one of their 407 aircraft are unique. The idea of naming aircraft started with FedEx’s first aircraft that they purchased on March 6, 1972. The parcel company took hold of a Dassault Falcon 20 from LTV Aerospace Corporation and after painting the airplane into the famous FedEx purple and orange, CEO Fred Smith decided to name the airplane after his daughter Wendy in tribute to her. The name was painted under the last window on the cockpit on both the starboard and port side of the aircraft. The idea was then given that FedEx employees could submit their children’s names to be given the chance to have their name put on a FedEx aircraft. 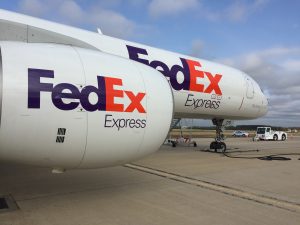 Since “Wendy,” over 700 names have appeared on FedEx aircraft. To commemorate their name, the son or daughter is given a certificate with them knowing that they were selected to be on an aircraft along with the aircraft’s registration and picture to let them know the aircraft is flying. Names can appear more than once but are usually with a different spelling, with an example being the difference between “Braydon” (N857FD/Boeing 777F) and “Brayden” (N913FD/Boeing 757-200F). Since some aircraft, especially the FedEx Boeing 727 fleet, are donated to institutions and universities, odds are that the aircraft and name will live on even after its airworthy years are over. As for “Wendy”, the aircraft was donated to the Steven F. Udvar-Hazy Center were it continues to wear the FedEx and Wendy titles proudly.

A Joke That Flies A Long Way: jetBlue Airways and Virgin America

While most aircraft are given titles that have a cultural or a company identity involved, other choose to be humorous with titles. Low cost carrier jetBlue Airways has made it known that they will attempt to use the word “blue” in as many aircraft titles as they can, with aircraft names ranging from “Blue by Popular Demand” to “BYOBlue.” There are a few exceptions to the “blue” rule, with “I Love New York” being in a special NYC livery and the “Luiz F. Kahl” being named after the former Chairman of the Niagara Transportation Authority. 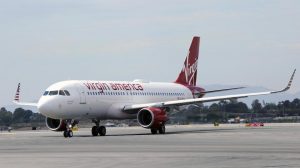 While jetBlue focuses on specific blue jokes, recently purchased Virgin America takes a more generic and more serious approach. A majority of the aircraft titles are made following the announcement of a new route or Virgin Brands announcement. The most popular are following new routes, with aircraft like “Air Drake” and “DFW One” following the announcements of flights to Canada and Dallas, respectively. However, the play on the Virgin name still holds true with aircraft like “My other Ride is A Spaceship” (for fellow Virgin brand Virgin Galactic) and “Virgin & Tonic.”

These North American airlines have found a way to personalize their fleet and while most passengers will not notice their aircraft’s name or understand their origin, the aircraft mean more to the airline and its employees. In part two, we cross the Atlantic and look at European carriers such as Lufthansa and KLM.