PART TWO: How Some Airlines in Central Europe Play “The Name Game”

This is part two of “The Name Game” series, for part one on North American carriers see here. No two aircraft are alike, and while every carrier can showcase this fact by slapping a registration number on the aircraft and recording the airplane’s manufacturing number, some take it a tad bit further. In this series we will look into the airlines that take individualizing each airplane to the next level. Individual aircraft and special liveries like British Airways “London 2012 Doves” and TUI Airlines Netherlands “#dreamcatcher” jet will not be counted since they are one off aircraft. From animals to World Heritage Sites, this is how aircraft earn their names.

To Each Their Own – KLM Royal Dutch Airlines

When it comes to naming aircraft, nobody has quite the broad level of names like KLM does. The airline has continuously proved to be different by having each new aircraft be named to correspond with a different theme. The themes currently on KLM aircraft include famous city squares (A330s), birds (737-700/800/900s), world cities (747-400s), World Heritage Sites (777s), flowers (787s) and the ships that were used by the Dutch East India Company (747 freighters). As aircraft retire, their named are not recycled, so themes that have gone away include famous painters (A310s), Dutch cities (DC-3s), explorers (737-400s), rivers (747-200s), and influential women (MD-11s). Despite their attempts to switch things up, some aircraft names have reappeared including “City of Utrect” and “City of Amsterdam,” who were both on DC-3s and DC-9s for Dutch cities and European cities as well as the explorer series, which appeared on both Boeing 737-400s and Douglas DC-8s. 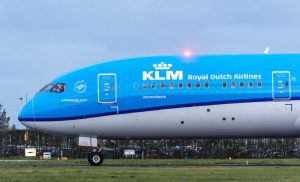 A committee is in charge of naming aircraft, however outside help is always encouraged at KLM. Fans recently helped influence the board to choose naming the Boeing 787s after flowers. Once an aircraft theme is chosen, the first aircraft to enter service is christened with champagne much like a ship would be, but KLM will only spray the beverage on the aircraft instead of smashing the bottle into the side to avoid any damages. Aircraft names are usually written in two languages, with Dutch on the port side and English on the starboard side. There are a few exceptions, such as Hibiscus (Boeing 787-9 PH-BHF) which as the name written in Mandarin on the starboard side. KLM’s special liveries also maintain there themes, with aircraft like the 90th anniversary retrojet and #OrangePride maintaining their names of “Zwaan/Swan” and “Nationaal Park De Hoge Veluwe/De Gofe Veluwe National Park”, respectively. While naming the fleet can be challenging, KLM has kept the naming rules strickly to mainline aircraft, with regional carriers like KLM Cityhopper and former carriers KLM Alps and KLM Exel’s aircraft going unnamed.

Home and a History Lesson – Alitalia

While KLM gets creative with their aircraft names, Alitalia gets creative while also maintaining their Italian heritage. The Italian carrier has various themes for aircraft that are all homeland based. For a majority of the airline’s Airbus fleet, the aircraft are named after famous Italians. Aircraft that follow the theme include the Airbus A320s with names like Giovanni Pascoli and Aldo Palazzeschi, as well as Airbus A330s with names like Michelangelo Buonarroti and Giotto. While Italian names make up most of the fleet, there are some exceptions, with aircraft being named after composers like Bach and Mozart as well as planes named after other forms of transportations such as the Zefiro (train) and Maestrale (frigate). The remaining aircraft in the Alitalia fleet are named after Italian locations, with the Airbus A319s being named after islands like Isola del Giglio and Isola di Capri, and the Boeing 777s being named after mainland areas like Portofino and Porto Rotondo. 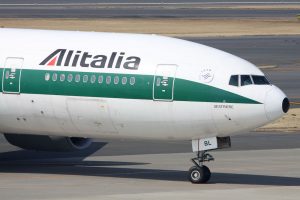 Prior to today’s fleet’s names, Italian locations took a more predominate position with aircraft like the DC-9, MD-80, MD-11F, and ATR 42s all being named after the islands or mainland regions of Italy. This island named aircraft will be completely removed from the fleet when the Airbus A321 is retired from Alitalia, who currently only have 12 of the original 23 in service. The Boeing 767s and DC-8s were previously in charge of the famous Italian people, however, names like Vivaldi and Vespucci haven’t reappeared since the DC-8s were removed in the late 1970s. Aircraft name locations on Alitalia depend on the livery, in the older livery the names are located behind the forward main doors under the green stripe, but in the newer livery the names are moved forward under the cockpit windows.

Take Home With You – Lufthansa/Cargolux

Lufthansa was actually not the first to start naming their aircraft after cities, as the tradition began in 1960 when the Mayor of West Berlin, Willy Brandt, led the charge and named a brand new aircraft after the city. Following the event, Germanic cities started filling out requests for their city to be on the side of an aircraft. The tradition has mostly stuck to the cities of Germany, with aircraft titles ranging from “Frankfurt/Oder” to “Idar-Oberstein”. The size of the city does not determine the aircraft that the name is applied to, allowing towns like Saarland and Nordrhein-Westfalen to appear on Boeing 747s. The Airbus A380s fleet is the only aircraft to buck the trend of German cities, with the fleet being named after international destinations including Johannesburg, New York, and Tokyo. Aircraft titles are always written with the aircraft type under the windows that follow the first door on the lower floor of the aircraft. According to Lufthansa, the airline has a list of 245 cities that have sent applications for aircraft names, leading to a 15+ year backlog. 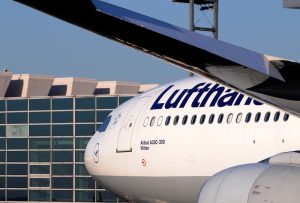 Luxembourg’s cargo carrier CargoLux follows a similar strategy. The airline has less of a backlog than Lufthansa thanks to Luxembourg being a much smaller country. Most of the airline’s fleet of Boeing 747 freighters bear names like “City of Luxembourg,” “City of Contern,” and “City of Esch-sur-Alzette”. Due to the airline’s expanding fleet, CargoLux has slowly run out of cities from the homeland, leading to some newer freigthers deviating from the plot. Examples of newer aircraft with different names include “City of Zhengzhou” due to its popularity as a Chinese destination for CargoLux and “Joe Sutter-Father of the Boeing 747” named after the creater of the aircraft that makes up all of CargoLux’s fleet. CargoLux’s Italian branch, CargoLux Italia, follows a different naming tactic, with the fleet of four Boeing 747s being named after Italian mountain ranges, the four being “Tre Cime Di Lavaredo”, “Monte Rosa”, “Monte Cervino”, and “Monviso”.

When ex-Formula One driver Niki Lauda sold his former carrier Lauda Air to Austrian, he almost immediately began building a replacement carrier, Fly Niki. The carrier, based in Vienna, has tried to keep to the theme of Austria’s rich music history. 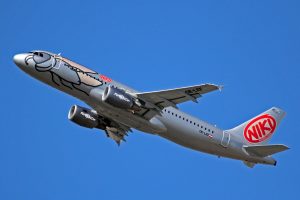 With composers such as Haydn, Mozart, Beethoven, and Schubert all performing some of their work in Austria, Niki tried to catch on to the music theme. Airbus aircraft in the Niki fleet are named after music styles, including “jazz,” “reggae,” and “gospel.”  The fleet of Embraer ERJ-190s were never named. Also, Niki’s aircraft naming is slowly dying out thanks to being bought out by Air Berlin, who removes the names when aircraft are repainted. Of the original Fly Niki fleet, only seven aircraft maintain their musical names, including six Airbus A320s and one A321.

The airlines of central Europe have utilized their creative and deep history to showcase their country on their aircraft. In the next article, we will take a closer look at northern European airlines such as Aeroflot and SAS who each have their own strategy for naming aircraft.