A Success: Airbus’ First A350-1000 Completes Its Maiden Flight in Toulouse

Airbus reached a key goal in the development of the A350-1000 after a successful maiden flight was made from Toulouse-Blagnac airport today. The initial flight was scheduled to take place at approximately 10:30 a.m. local time and, after waiting briefly at a holding position, the aircraft took-off at 10:42 a.m. from Runway 32L, shadowed closely by a Dassault Falcon 20 chase plane. The aircraft then turned onto a southbound heading of 190, climbing to 10000 feet, to start its initial flight testing.

This was followed by a test flight lasting four hours over southwest France. In the cockpit were experimental test pilots Hughes Van Der Stitchel and Frank Chapman, along with Test Flight Engineer Gerard Maisonneuve. For approximately 3 hours, they flew at 10,000 feet and kept to around 250 knots, then tested some higher speeds and climbed to 25,000 feet, before returning to 10,000 feet and back to Toulouse-Blagnac.

During the flight, Christophe Cail, the Airbus Chief Test Pilot said, “The first flight is going very well, it took off around three hours ago. It climbed to 10,000 feet and is still at that level, exploring the flight envelope of the aircraft from low speed, high speed, all the flap configuration. And so far, so good; everything is working well.” 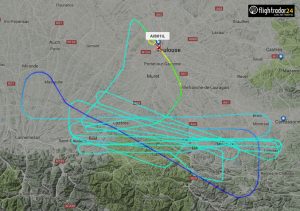 With a stretched version of the A350-900 fuselage, the A350-1000 is the longest in the A350XWB family, and the largest twin-engine aircraft made by Airbus. Previously, the company had plans for a smaller A350-800, but these were canceled due to the A330neo development.

Notable external appearance differences of the A350-1000 to the A350-900 include the 74-meter fuselage, making it seven meters longer, and the switch from four wheels to six wheel bogies for the main undercarriage. There are also key differences in the overall operational performances.

Among these differences are a longer range of 7950 nautical miles, a standard layout allowing for 366 passengers (including 18-inch seats in economy), and a 25% lower operating cost compared to various competitors.

The aircraft is powered by a higher-thrust version of the Rolls-Royce Trent XWB-97 engines, producing 97000 lbs of takeoff thrust, and is designed for high efficiency, maximum reliability, and optimized performance.

Viewed as a replacement for the A340 and possibly the A330 family, the A350 already has regulatory approval for a common type rating between the two aircraft. The first A350 aircraft to take to the skies was the A350-900, on 14th June 2013, with type certification given just over a year later in September 2014. With the introduction of the A350-1000, the aircraft is now in direct competition with the Boeing 777.

Published figures from Airbus currently show that 195 aircraft are on order, spread between 11 operators from five continents, with the first planned delivery to Qatar Airways in the second half of 2017.

With the success of this fight, further testing can now begin in earnest. Due to experience with the A350-900, this is expected to take only around a year with a three aircraft test fleet.

Commenting on these test aircraft, Christophe Cail added, “The first one was MSN059 and this model is equipped with a heavy flight test installation. There is no cabin in the back, so on this aircraft we have indicated to open the flight envelope, to test braking systems, to test the engines, to do lot a lot of tests on the aircraft. We have a second one with a heavy flight test installation, MSN071. This one will fly in the coming weeks and will help the first aircraft just to continue tests on the wire system. And there will be a third one, MSN065, and this one, unlike the others, will be fitted with a cabin. It will mainly test the air conditioning the cabin, the pressurization of the aircraft.”

After the completion of the flight, Airbus President and CEO Fabrice Brégier said, “We have seen today the world’s most modern and efficient passenger aircraft – the A350-1000 – in action for the very first time, adding soon to the successful A350 Family. My congratulations and thanks go to all the teams who have contributed to make today’s flight happen.” 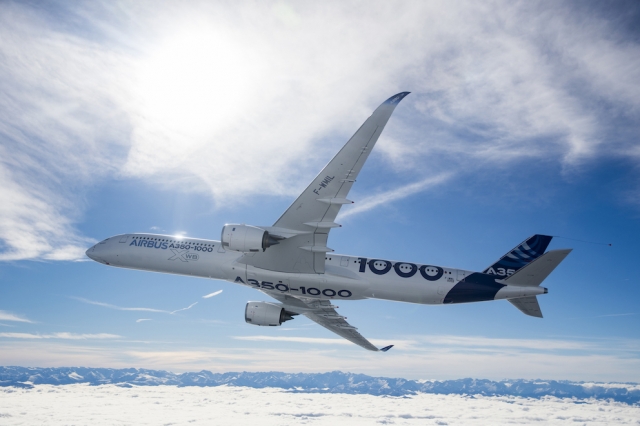 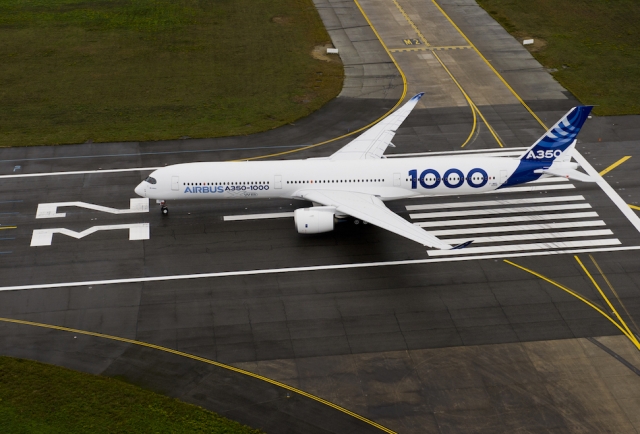 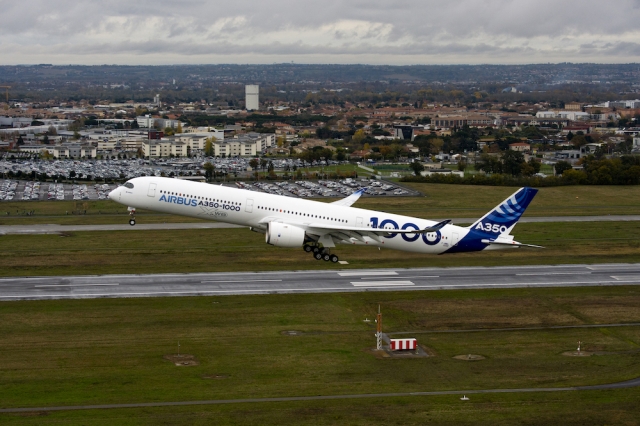 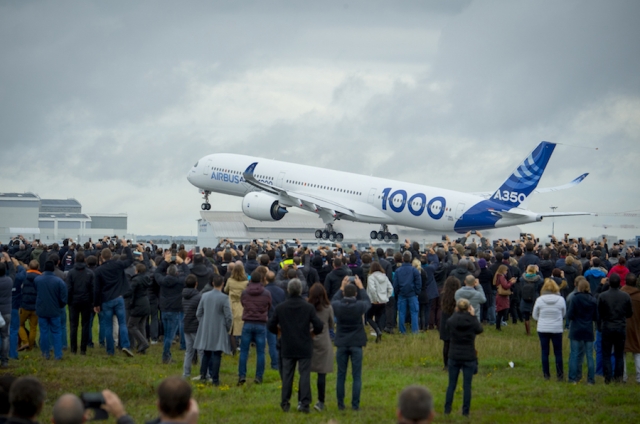 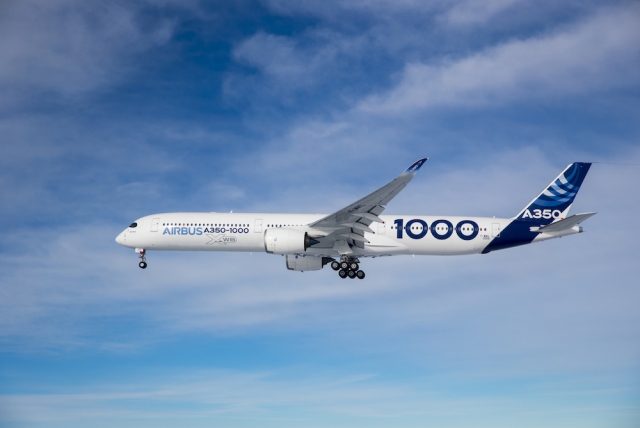 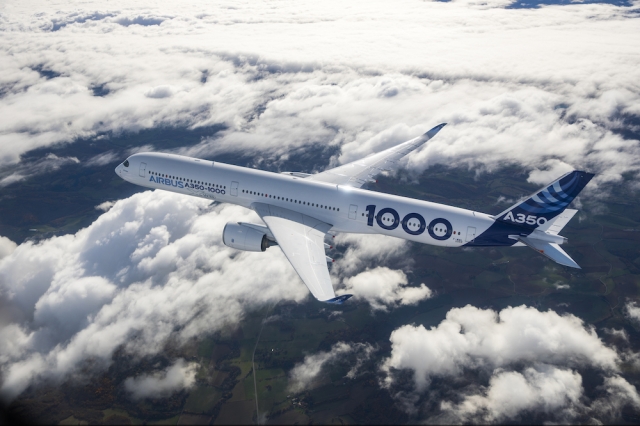 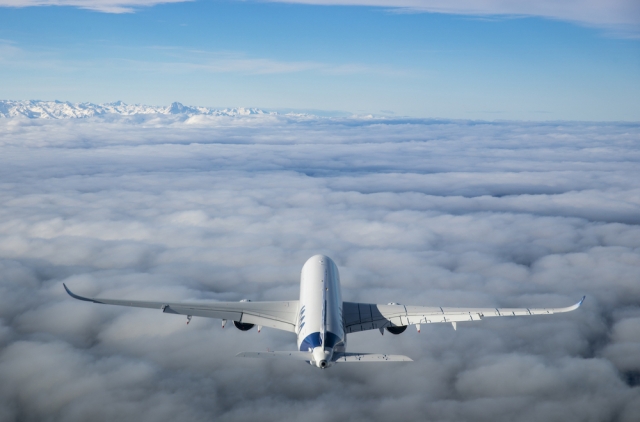 *All photos provided by Airbus