It was the event seen around the world as CCTV cameras captured a wall of water engulfing Sendai International Airport in one of the worst earthquake and tsunami disasters to date on March 11, 2011 in Sendai, Japan.

The water was just the start of the destruction of Sendai as the Tōhoku earthquake and tsunami aftermath would go on to claim over 15,000 lives and cause over $122 billion in damage. But both the airport and the city’s rebuild and restart to service are equally as impressive.

The damage had been done and immediately following the residing of the water, work went into repairing the surrounding area. The terminal was damaged due to high water levels and the land around the terminal was scattered with cars and debris that were left behind by the storm when the water washed back out to sea. 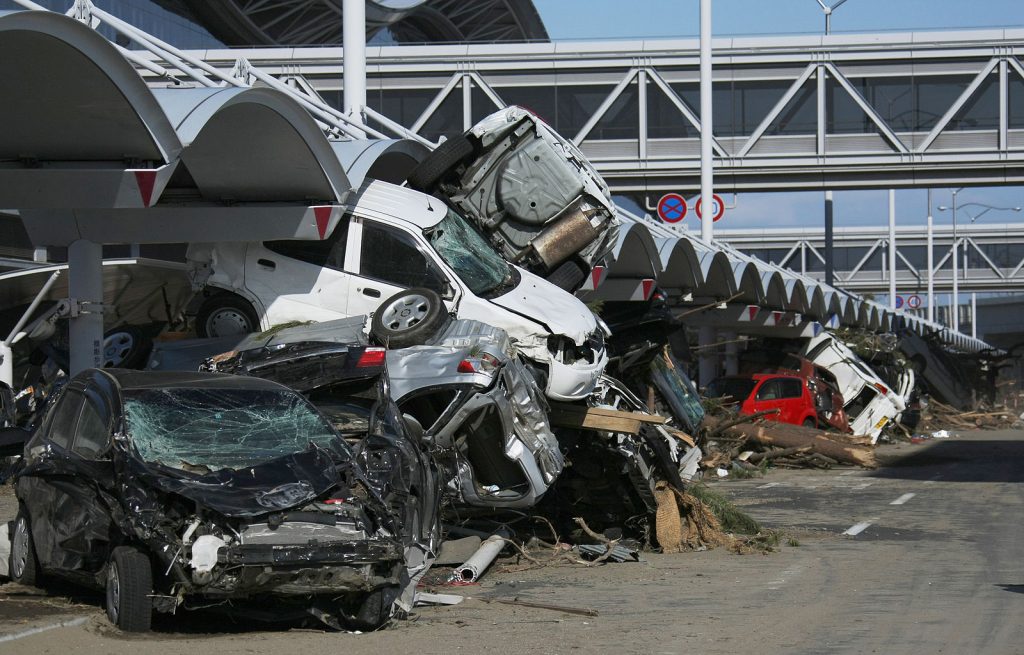 Cars and other debris on the landslide roadway at Sendai Airport following the disaster (Photo: Jose I. Sanchez Alonso [Public domain], via Wikimedia Commons)

The airport lost most of its ground equipment and any aircraft that was parked on the ramp was washed away when the waves came. The air traffic control tower was flooded and abandoned, crippling the aviation traffic in the surrounding area. Damage inside the airport was minimized, however, getting to the terminal by road was nearly impossible.

Work immediately started to repair the damaged airfield in hopes of restoring the main means of getting supplies quickly to Sendai. The cleanup drew many different faces, from volunteers to locals, to the 353rd Special Operations Group. Thousands joined in to remove hundreds of disabled vehicles from the runway and nearby roads as the progress slowly moved closer to the terminal. 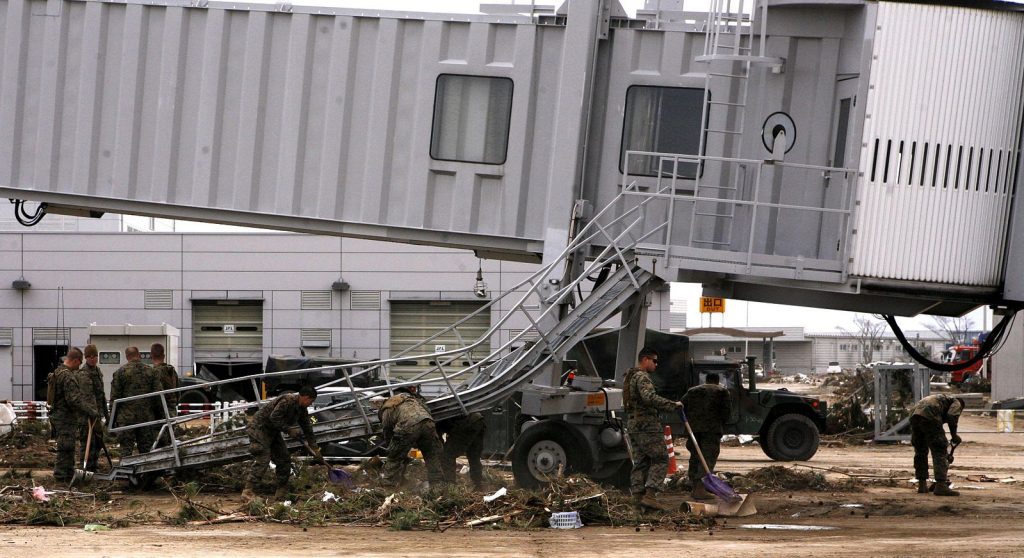 Just six days after the airport went offline, the military engineers declared Sendai International Airport open for relief and military aircraft. The airfield became home to a variety of aircraft, including JSDF MC-130s and USAF C-17s, as they brought military grade loaders to clear damage and relief supplies like water and food to be distributed to those impacted by the disaster. Despite the widespread damage, the airport was back to operating commercial service just over one month after being knocked out. 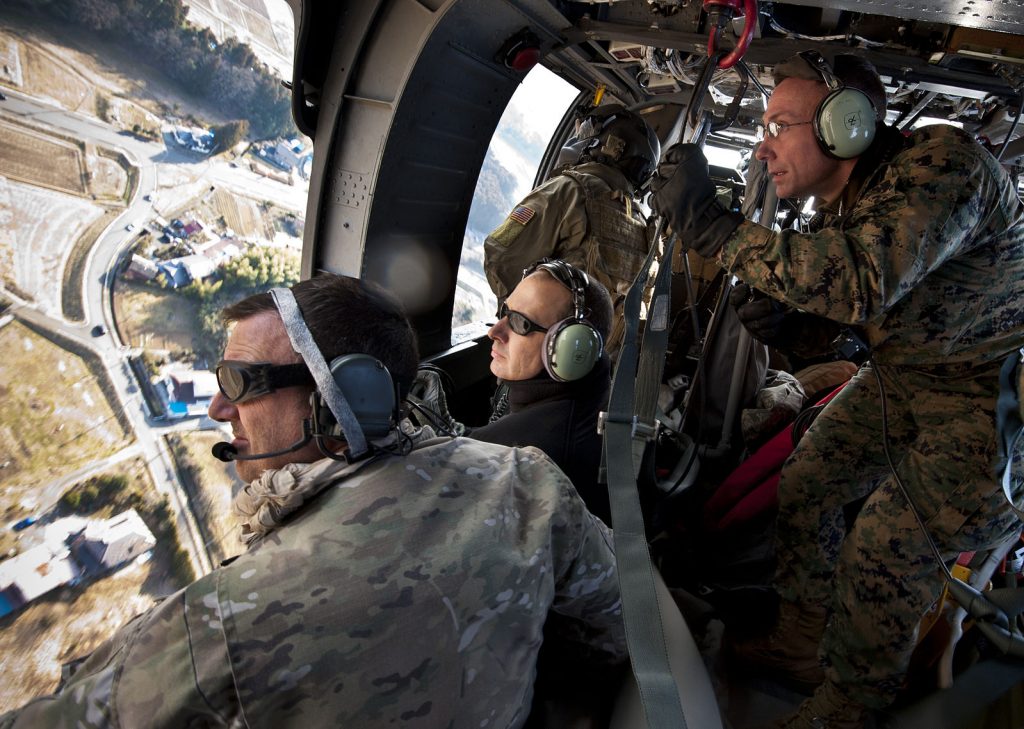 The airport reopened to domestic commercial traffic on April 13, 2011 with the arrival of All Nippon Airways and Japan Air Lines flights from Tokyo. Service started out on a limited basis with both carriers only operating flights to Tokyo a few times a day.

As time progressed, the airlines brought back service to other cities such as Osaka, Sapporo, and Nagoya. By late summer the domestic service was back up to full strength while the international terminal went through a rework due to the extensive damage it had received. The airport’s international operations were suspended until October when the terminal was finished.

By the one-year anniversary of the tsunami, Sendai was back to full strength with over 90 flights operating each day. While the airport overcame adversity, the surrounding area became even more impacted as the debris was mostly removed from the Sendai area.

The ports had been reopened and rail service had restarted. 2012 saw the airport rebuild its hangars as they had received slight structural failures due to the pressure that water and debris had put on them. 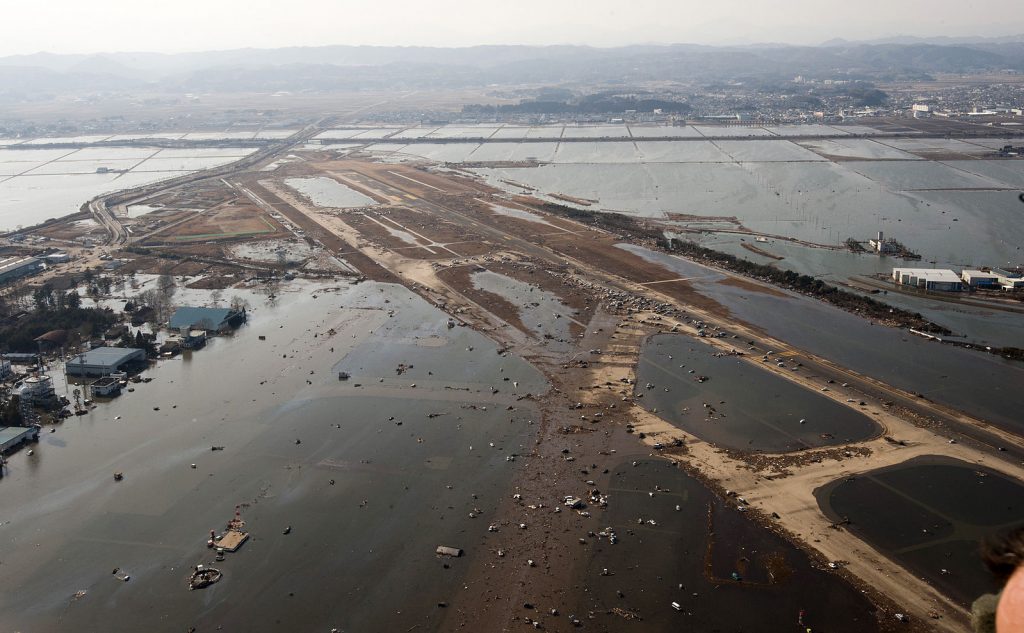 This increase can be attributed to more daily services on domestic flights as well as new services provided by Peach and Thai International Airways. Sendai will also continue to see growth with the arrival of Skymark Airlines flights to Kobe on July 1.

For those who travel to Sendai today, you may not even notice that the city was nearly wiped off the face of the earth a few years ago. Most of the structures have been replaced or repaired and the town works as if it had never been destroyed.

The city had removed most of the damage within two years of the flood and started rebuilding right after, almost creating a new city in the process. So while Sendai’s unique yellow marked runways tell the story of a natural tragedy, they equally represent the incredible recovery that the city has seen in recent years.