The C919 roll out marked a milestone for Comac. (Photo: Zhang Anchao/Comac)

At 02:01 am Eastern Time (14:01 local) the first Comac C919 took off on its maiden flight departing from runway 34R of Shanghai Pudong International Airport. The aircraft, registered B-001A, operating under a special permit to fly by the Chinese CAA, touched back down at 15:20 pm following a one hour and 19 minute flight.

The C919, which completed its high-speed taxi test last month, is China’s hope of breaking into the worldwide airliner market. Comac (Commercial Aircraft Corporation of China) was set up in 2008 by the Chinese government to reduce the domination of Boeing and Airbus among its airlines as well as establish itself as one of few countries to develop homemade aircraft.

Currently, the aircraft has 22 all Chinese customers waiting for deliveries, the first expected no earlier than 2020, with over 500 commitments (99 firm orders) so far. The aircraft is the second created by the manufacturer, with the first being the ARJ21, a tail mounted twin-engined aircraft seating 78 in a two-class layout.

The aircraft was towed out of the hanger to the media area at around 10:00 am local time. Prior to departure pre-flight checks were carried out by the test crew and the aircraft’s auxiliary power unit (APU) was started 60 minutes before departure. The short taxi to the runway began at 13:50, only to be airborne 11 minutes later. Before departure, the Chinese Civil Aviation Authority presented the test certificate of the C919 to Comac.

The crew operating the test flight was lead by Captain Cai Jun, alongside him was co-pilot Wu Xin. 57-year-old Senior pilot Qian Jin was an observer on the flight deck and Ma Fei and Zhang Dawei were the two flight engineers.

Local pilot Captain Cai spoke the day before saying, “I have full confidence for the maiden flight and feel quite proud to pilot the C919 in my hometown of Shanghai.” Cai has over 10,000 hours of flying in his logbook and prior to joining Comac six years ago, he flew for China Eastern Airlines. Both pilots have previously conducted flight tests for Comac’s first aircraft, the ARJ21.

The chase plane for the test flight was an Embraer Legacy EM-145BJ (B-3293). It departed Shanghai 45 minutes ahead of the C919 and entered a holding pattern to the north of the airport. 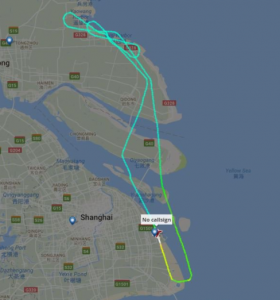 After take-off the aircraft departed to the northwest of the Shanghai area, meeting with the chase plane and conducting manual handling including turns and altitude changes. One hour later, the C919 headed southbound to join a right-hand downwind leg to land back on Pudong airport 79 minutes after its first take off.

Since the creation of Comac back in 2008, the company immediately laid out its plans to create a twin-aisle aircraft, known as the C919. Completing its initial design in April 2009, the manufacturer aimed for its maiden flight to be completed in 2014. In September 2009 Comac unveiled a model in front of the Asian Aerospace Expo in Hong Kong for the very first time. A year later the aircraft had 100 orders penned down.

In October 2013 locals news reported that delays would push the first flight until at least 2015 with deliveries expected in 2018. February 2015 saw the basic assembly of the aircraft completed, with the first aircraft rolled out in a ceremony in November of that year. 12 months later, orders and options passed 500 with China Eastern Airlines announced as the launch customer.

The aircraft was moved to the test flight center on Christmas Day 2016 and underwent high-speed taxiing in April 2017.

Although the aircraft was hit with setbacks and delays that not even Boeing or Airbus have ever dodged, the persistence shown gives a good indication of China’s aviation ambition.

Comac hopes the new type will compete with the Airbus A320neo, Boeing 737 MAX, and the Bombardier CS100 aircraft within the low-cost airlines, especially in the expanding Chinese aviation industry.

According to Comac, 200 Chinese companies and 36 universities have been involved in the design and development of the aircraft. Although the C919 is currently equipped with CFM LEAP-1C engines, a move to Chinese engines is expected beyond 2020, built by AVIC Commercial Aircraft Engine Co.

Following the maiden flight, the aircraft will return to the test hangers and may not be seen for a short while. In the meantime, the manufacturer will seek to obtain Chinese airworthiness certification prior to deliveries.

“The significance is huge, it’s the first ever large-frame aircraft made in China,” said Xiong Yuexi, a professor and airplane design expert at Beihang University in Beijing. “It has a great impact on the Chinese people and the domestic market.”

Domestically, the country is expected to require an additional 6,000 aircraft according to Airbus over the next 10 to 15 years as the Chinese travel market grows larger than the United States, according to IATA.

Although the aircraft is likely to be successful with the growing Chinese market. Comac is eventually seeking FAA certification, one of many stepping stones to the aircraft being operated outside of Asia.

Currently, only a handful of countries accepts the Chinese aircraft certification, meaning the FAA and European licenses will be crucial to international sales and breaking into the Boeing-Airbus duopoly. The European Aviation Safety Agency (EASA) has already begun the process of certifying the aircraft

The flight is a historic moment to Comac as a manufacturer and China’s aerospace industry. The country can join countries such as the U.S., Russia, Brazil, Canada, the U.K., France, and Germany by claiming to have created its own airliner.

For now, the aircraft will go back into hiding. The C919 will undergo more ground and air tests leading to its certification before deliveries can take place. The manufacturer expects to roll out two airplanes per year from now to 2019 to obtain proof of safe flight production on a mass scale begins.

Officials will continue to seek for a western certification, and eventually open the door to worldwide sales to take on Boeing and Airbus, as well as, the new Russian MC-21 aircraft due to take it’s first flight later this year. On current prices of sales and orders, the C919 are expected to cost approximately $68 million, cheaper than both the 737 MAX and A320Neo.