A New Zealand tourist was killed after sustaining injuries caused by the jet blast of a departing 737 at Princess Juliana Airport. The airport is a well-known attraction for keen aviation enthusiasts, as well as a famous spot as aircraft of all shapes and sizes fly over Maho Beach at low altitudes.

Although danger signs are situated at various points along the beach, people are attracted to the thrill of standing behind the perimeter fence, most times holding on, during the departure of airliners. SXM is ranked as the fourth most dangerous airport in the world by The History Channel’s program Most Extreme Airports. The airport only runway is 2,300 meters (7,500 feet) long and is surrounded by seawater at both ends, as well as a mountain situated to the east, requiring departing aircraft to turn south once airborne. 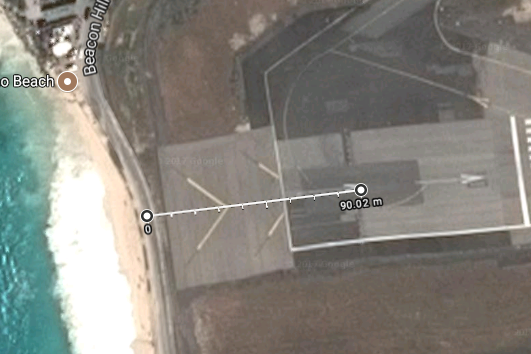 The distance between the perimeter fence and the line-up position (Photo: Google Maps)

Because of the nature of the airport and its surroundings, departing aircraft require the maximum amount of runway they can get, maneuvering into a position ending up approximately 90 meters away from the perimeter fence.

The Island’s Director or Tourism, Rolando Brison, spoke to the The New Zealand Herald saying: “I met with the family of the deceased this evening and while they recognised that what they did was wrong, through the clearly visible danger signs, they regret that risk they took turned out in the worst possible way.” The paper also stated the 57-year-old female was blown by the jet-blast, causing her to fall and hit her head on the pavement.

The accompanying video clearly shows the effect of a KLM 747 applying take-off thrust to its four engines, causing the people on the fence to feel the force, and those unable to hold on run out towards the ocean, where the sand is blasted out to the sea and ocean ripples travel outwards.

Danger signs are clearly visible at various locations of the beach highlighting the obvious risk of standing near to the runway. Local police patrol the area at peak times advising people of the risk of the jet-blast. Although there has been a history of accidents involving people being injured due to the jet-blast, it is believed that this is the first death caused by an aircraft.

Having visited the island back in 2008 I can speak from experience of the force of the jet-blast from a departing 747. As a 13-year-old at the time, running up to the fence behind a 747 in front of my father sitting at the famous Sunset Beach Bar with his camera would probably have set alarm bells ringing. Luckily for him and my mom, I wasn’t silly enough to do it and probably didn’t have the strength to hold on even if I had, so I decided to make a hole in the beach and sit facing out to sea with my Coke in hand. 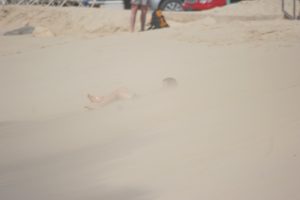 It’s obviously people’s choice to go and stand by the fence. I sense those that do it may not necessarily be aviation enthusiasts — they’re seated at the bar with their beers and cameras. There are signs located on the beach highlighting the danger of standing close to the airport fence, something that should be quite clear to the average joe.

Locals are fully aware of the dangers, especially in their cars. They stop on the road at both sides of the runway waiting for the arriving and departing aircraft, not wanting to risk their car become temporarily airborne and turn into an amphibious vehicle in the ocean.

The sandblast caused by the aircraft’s power is definitely the most painful thing I’ve experienced on a beach. Whichever part of your body you choose to leave unclothed quickly becomes exposed to thousands of sand particles blowing against your skin. This is probably the closest thing to a literal version of pins and needles.

Today’s news is probably the first time a death has been caused by this event. But I can guarantee people will still line up on the fence in between the beach and the runway tomorrow and in the future. It’s publically accessible land and because of the lack of space, there aren’t any physical alterations that could be made in the future to remove the ability for people to stand close by. What we don’t want to see is a governmental overreaction changing the nearby landscape and ruining this aviation hotspot.