It Takes Two to Tango: Aviation in the Netherlands Antilles

Since the 1990s, there has been a significant expansion in tourism of the Netherlands Antilles islands in the Caribbean, specifically Curacao and Aruba in the Southern Caribbean. Given the islands’ increasing popularity, a unique scenario has continued to occur as two airlines have continued to battle for domination in this small market.

However, rising fuel prices and increases in operating costs in the islands started to take its toll of the two carriers in the late 1990s. Both airlines started to downsize their route maps in hopes of staying airborne.

A Turn Toward Bankruptcy

By the 21st century, entering bankruptcy seemed to be inevitable for Air Aruba, and it quickly opted to do so in 2000. The airline cited rising costs in what was a seasonal destination as the reason for the bankruptcy, and would never take to the skies again. ALM Antillean was the next to fall just a few months later, grounding the fleet of Dash 8s and McDonnell-Douglas MD-80s in early 2001.

With both island based-carriers grounded and airlines of the surrounding islands downsizing as well, the Netherlands Antilles would have to rely on foreign airlines to service the islands. Fortunately, from the ashes of ALM rose Dutch Caribbean Airlines (DCA). The carrier took over a few of the old ALM aircraft as well as began adding larger Boeing 767-300s to service Europe. The carrier launched in 2002 from their hub in Hato.

While DCA began starting service, the new airline was not alone. Exel Aviation Group decided to start operations in the Netherlands Antilles as well with the beginning of its new brand, BonairExel. The airline started with smaller Embraer ERJ-145s to island hop between Bonair, Aruba and Curacao. The island hopping service was a huge success, and to counter the demand the Exel Group added the ATR 42 to the fleet and created a second carrier called Curacao Exel.

While the Exel Aviation Group was expanded, the competition was retracting. DCA was struggling to turn a profit on the old ALM routes, and would declare bankruptcy in 2004. To compound the problem, Exel Aviation Group would be sued for failing to pay back loans that were taken out to start the company, resulting in the carrier having part of their fleet being grounded in 2005.

Post lawsuit, the carrier decided to ditch the Exel brand and become something more unified, merging both brands into what would be called Dutch Antilles Express.

With Dutch Antilles Express being the lone carrier of the Antilles, the airline was able to expand and add the Fokker 100 to their fleet, while also leasing several McDonnell-Douglas MD-80s for peak travel times. However, the carrier would yet again have to the share the island service with the arrival of Insel Air.

Insel Air started the exact same way that Exel Group had, with the airline servicing Aruba, Bonair, and Curacao with prop aircraft. The airline launched in 2006 and saw massive success, quickly expanding to include larger aircraft such as the McDonnell-Douglas MD-80s. The MD-80s allowed the airline to operate international services to St. Maarten, Medellin, and Charlotte.

To counter Insel Air, Dutch Antilles Express added two more Fokker 100s and commenced service to St. Maarten, Caracas, and Santo Domingo, all while signing a partnership with KLM. Despite the expansion, both carrier took huge hits from the economic slowdowns of 2008. Dutch Antilles Express would be sold to the Netherlands Antilles government to avoid bankruptcy in 2011 and Insel Air would slow expansion until it could stop the cash issues the carrier faced. 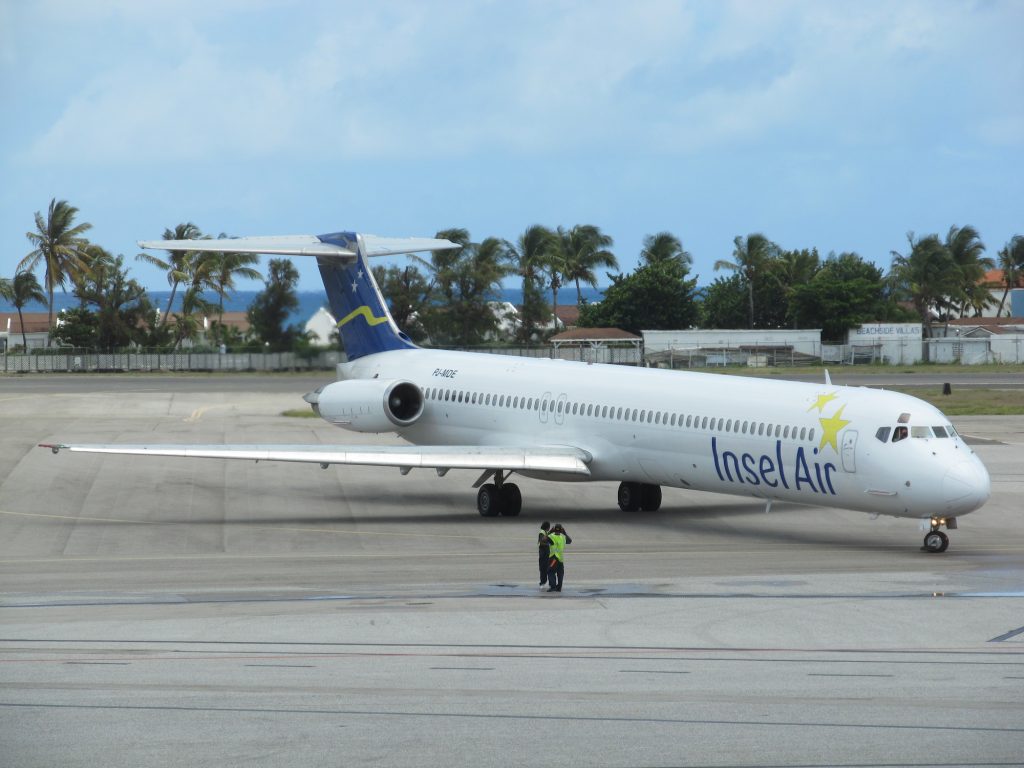 With DAE struggling in 2011, Insel Air decided to take advantage of the situation and launch more routes from Curacao to Paramaribo, Manaus, as well as announced that Miami would become one of its focus cities. Insel Air would continue to thrive, while DAE began to fall apart.  DAE was forced to return to leasing Falcon Air Express McDonnell-Douglas MD-80s, and the Netherlands Antilles made multiple cash infusions into the airline to keep it afloat.

In 2013 the government met to look into the advantages of keeping the carrier and didn’t see the need with Insel Air doing so well. With the votes favoring dissolving the carrier, DAE was grounded on August 24, 2013 and entered bankruptcy the same day.

However, in typical fashion of aviation in the Netherlands Antilles, there would always be two. Insel Air would see the rise of a new challenger in the name of Aruba Airlines. Aruba Airlines had been flying charter flights domestically since 2006, but decided to upgrade to international commercial flying and applied for an Airline Operating Certificate in 2012. The carrier was granted one and took delivery of their first Airbus A320 to begin service in summer 2013.

Aruba Airlines started slow, operating the solo Airbus A320 between Maracaibo, Venezuela and Aruba to allow the carrier to not trust a very delicate market early on. The carrier would slowly expand over the next two years adding routes to Miami, Florida, Panama City, Panama, and Valencia, Venezuela. The airline would add one Airbus A320 and one Airbus A319 to meet demand. The carrier also uses their aircraft for charter flights to the islands.

While Insel Air looked financially secure on the outside, the airline was struggling to turn a profit due to increased operating costs and a lack of payments from Venezuela. The problem was compounded in 2016 when the entire Insel Air fleet was grounded due to a lack of maintenance. Aircraft were leased from Swift Air and Fly All Ways in order to keep the airline from cancelling all flights, while the airline began performing necessary maintenance on its fleet.

As 2017 rolls on, the financial situation with Insel Air will determine the future of aviation in the Netherlands Antilles. The island has seen a seemingly never ending trend of the elder carrier falling out of style and going bankrupt while the younger carrier survives.

Aruba Airlines has proven to take its time on expansion and doesn’t see a need to rival Insel Air. However, the carrier could be the only one left standing should Insel Air continue to crumble. And if Insel Air falls, will there be another carrier ready to test the Netherlands Antilles market like history has seen time and time again?