On Wednesday, United employees, aviation enthusiasts, and members of the press all gathered at the Helen Mills Event Space and Theater on 26th Street in Midtown, Manhattan for the unveiling of United’s 2018 Winter Olympics Team USA advertising campaign. 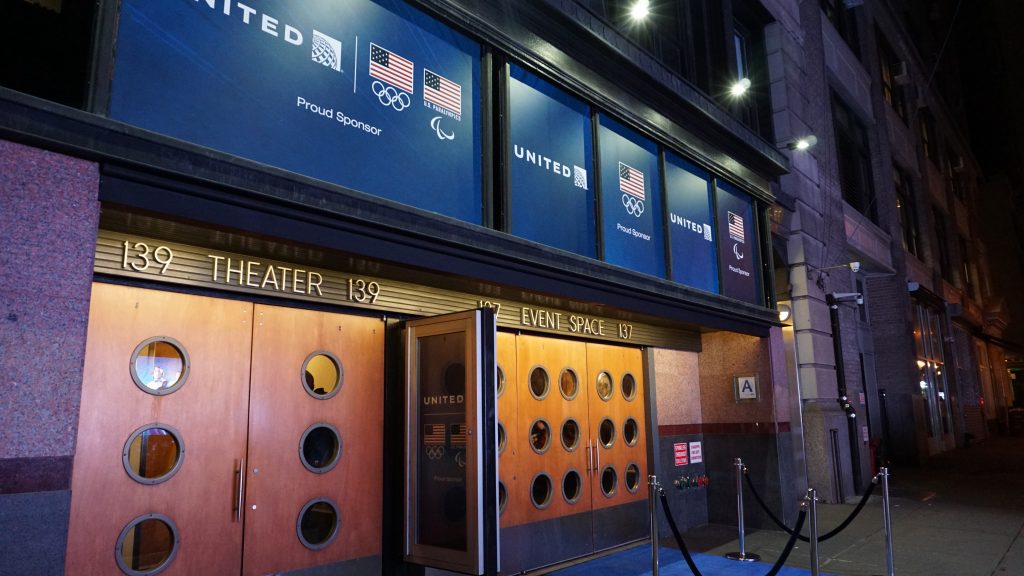 Gathering in a winter themed room emblazoned with the portraits of Olympic athletes and United Airlines employees alike, guests of the airline were able to get a first look at the airline’s advertising campaign which would be released to the public and sent out on television airwaves later that night. 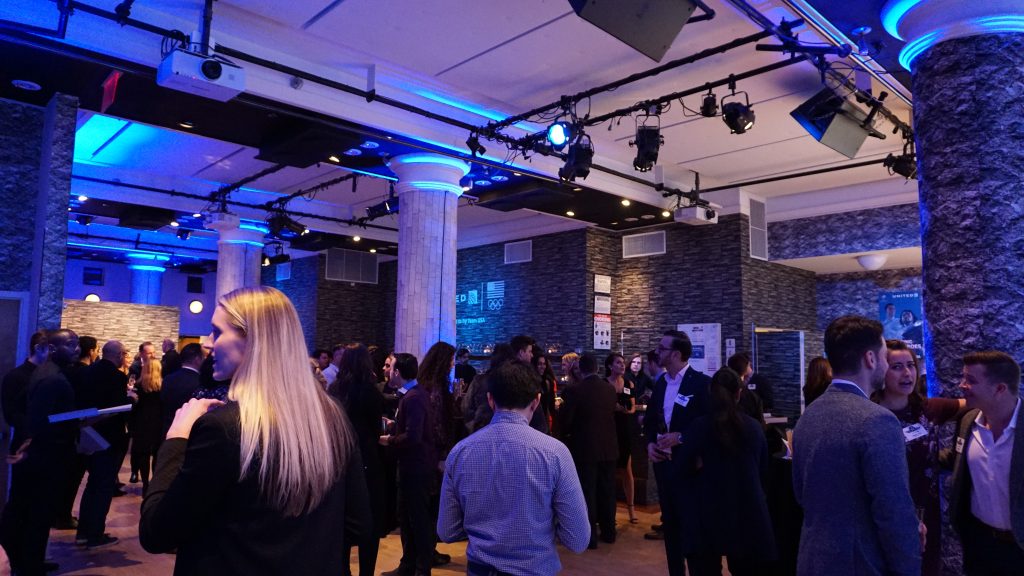 As the official airline of Team USA, United has been flying members of the United States Olympic team across the country, and the world, for all sorts of events. From practices to competitions, trials to events, the Chicago-based airline touts its status as having flown Team USA for 38 consecutive years.

Once the event officially began, guests were escorted into a theater viewing room to preview the commercials and other advertisements that would showcase both United and Team USA. First, executives from United Airlines and the United States Olympic Committee gave brief speeches about the endeavor they had been working on with this new campaign, with both stating their continued commitment and enthusiasm to working with each other for these Olympic games and future games to come.

Next, the audience was shown short vignettes by each of the athletes that would star in United’s new advertising campaign. The vignettes gave a brief overview of each athletes’ lives, including how they each got their start in the Olympics and their respective sports.

United then showed the two thirty-second commercials that it had created for the advertising campaign, each featuring three Olympic athletes. The flow of each commercial had the focus on the athletes and their superpowers first, then focusing on United’s employees doing the work to get them where they need to go.

The theme of United’s Team USA advertising campaign is to show that our Olympic athletes are superheroes to the millions of Americans that watch the Olympic games every two years. However, while they may be the face of Olympics, they’re supported by a vast team of United Airlines employees that get them from place to place in their support of Team USA.

United aimed to show that in addition to the athletes, the everyday workers that help facilitate airline travel are a few of the unsung heroes that don’t receive the recognition they deserve for ensuring that the athletes are able to get to where they need to go when they need to get there.

In highlighting its employees, United used actual employees for its videos. Featured in the video were employees from each aspect of the airline. Pilots, co-pilots, flight attendants, customer service representatives, ramp agents and operations agents were all featured in the two commercials that will be airing across the country. 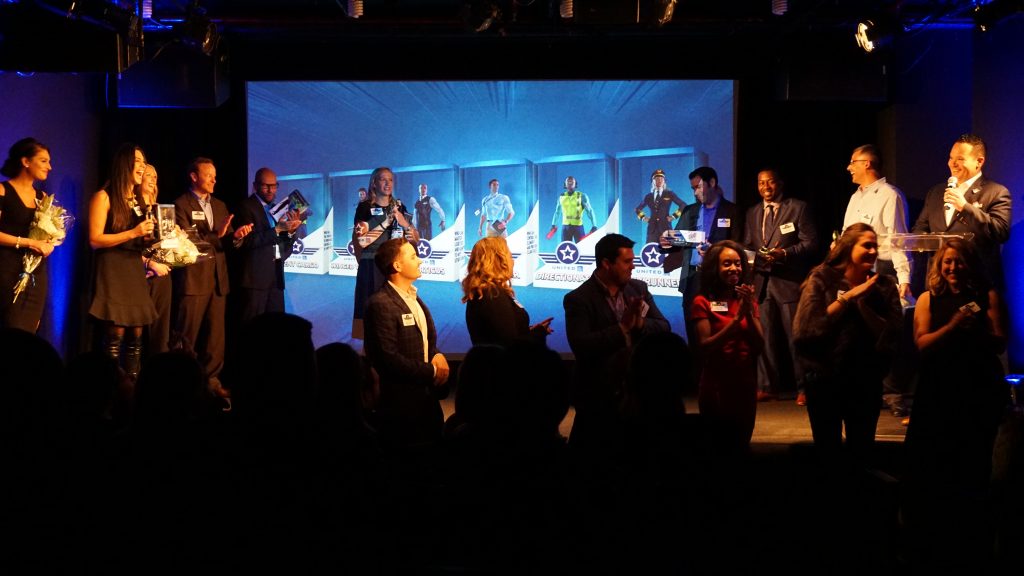 United employees at the unveiling of their superhero alter-egos. (Photo: AirlineGeeks | Justin Sinanan)

This isn’t the first time that United has made it a point to highlight its employees both on the frontline and behind-the-scenes. United’s Big Metal Bird video series has given customers an inside view of all aspects of the airline. The series, formerly hosted by ESPN’s Katie Nolan and now by Phil Torres, takes you to the lesser-known aspects of the airline, such as a heavy maintenance facility and catering kitchens.

For the aviation enthusiasts in the room, United also highlighted its new Boeing 777-300ER aircraft, the newest and largest in its fleet, as the centerpiece of the commercials. According to United executives, the Boeing 777 that was used during filming was fresh from the Boeing factory and hadn’t flown a single passenger yet. The commercials were filmed at Ontario International Airport in Ontario, Cali., both on the tarmac and in the terminal.

In attendance at the unveiling were each of the United employees that acted in the commercials. Each of them given a superhero alter ego, just as the Olympic athletes were, to highlight their work and importance to United’s operations. 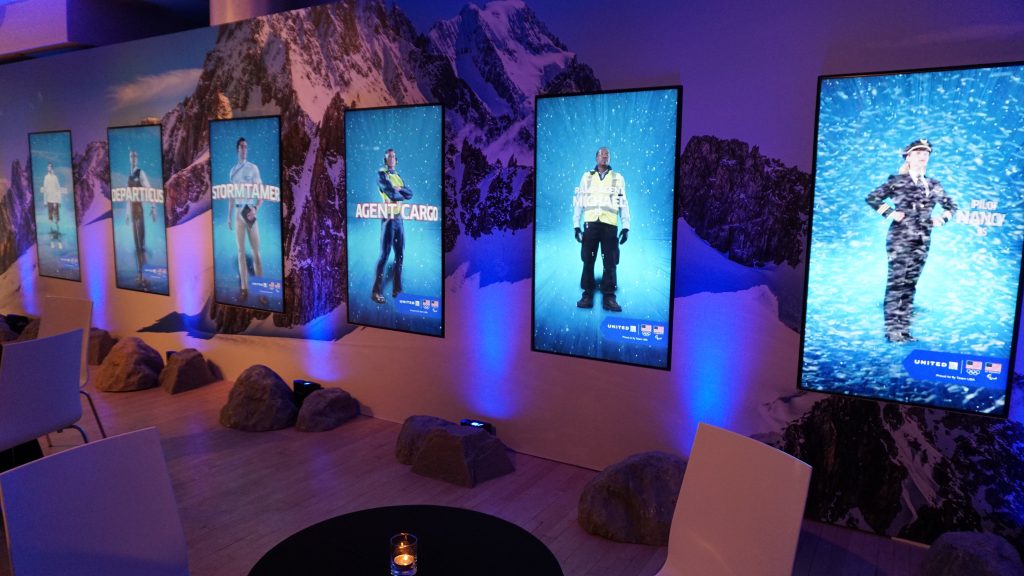 To further promote the superhero aspect, United had action figures made of each of the Olympic athletes’ superhero alter egos to distribute to the audience. As United executives pointed out, a superhero wouldn’t be complete without an action figure. In a surprise twist, United also made action figures for each of the employees featured in the commercials, which were also given to audience members.

For the final presentation, United showed a behind the scenes video of the making of the commercials, featuring a look at how the commercials were filmed and interviews with the Olympians, United’s employees and executives, the director of the commercial, the composer for the commercial’s score and an executive from the advertising agency McGarryBowen, which United hired for this campaign.

In the making of the commercial, United hired famed director Martin Campbell, director of major Hollywood movies such as Casino Royale, Goldeneye, and Green Lantern. For the musical score, United hired composer Brian Tyler, who has over 100 composing credits in the film industry. The airline clearly went all out to give their commercials a true Hollywood feel, which was echoed in the behind the scenes clip.

While the Olympic athletes could not be in attendance for the unveiling, United did fly in the employees that were featured in the video to witness the event. After the videos were presented, each of the employees was recognized on stage and was given their action figure.

The Olympic athletes did, however, record messages from wherever they were in the world that were played for the audience, mostly thanking United for the opportunity to represent United and further represent Team USA.

As the audience exited the theater, they were treated to the full version of composer Brian Tyler’s “Heroes Unite Suite,” which was composed solely for the purposes of the commercial. A full orchestra was used to create the score for the commercial, which was unique because they are typically used when creating the score for a major motion picture, not a commercial. 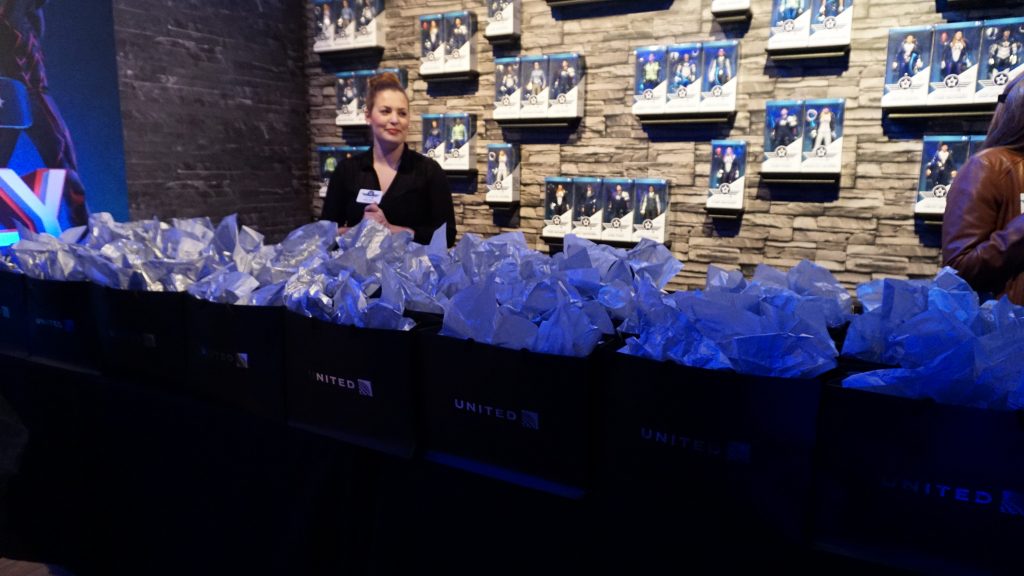 Lastly, once the event was over, guests received a United-themed gift bag featuring two action figure, one of an Olympic athlete and one of a United employee both in their superhero alter egos, and a United Team USA luggage tag.

The event affirmed United’s commitment to serving the athletes of Team USA in their endeavors for both the Winter and Summer Olympics, on and off their respective competition fields.

Contour Air to Launch Operations Out of Indianapolis Base

The Covid-19 pandemic was a major blow to airlines across the globe, airlines cut routes everywhere and Contour was no…

The ever-changing Covid-19 travel restrictions across various countries have continued to increase uncertainties amongst airlines, and Canadian carrier Air Transat was one of such airlines that were handed a lengthy flightless period. Now, for the first-time in six months, Air Transat made an announcement on Friday about its return to…