On Saturday night, Long Island’s Cradle of Aviation Museum in Uniondale, N.Y. was transported back in time to the 1950s, 60s and 70s, better known as the age of the Boeing 707 for Pan American World Airways. At a “Clipper Gala” hosted by the Pan Am Museum Foundation, former Pan Am employees, ranging from captains to airport staff, gathered in the Long Island museum to celebrate the launch of a new exhibit called Boeing 707: A Fast Story. 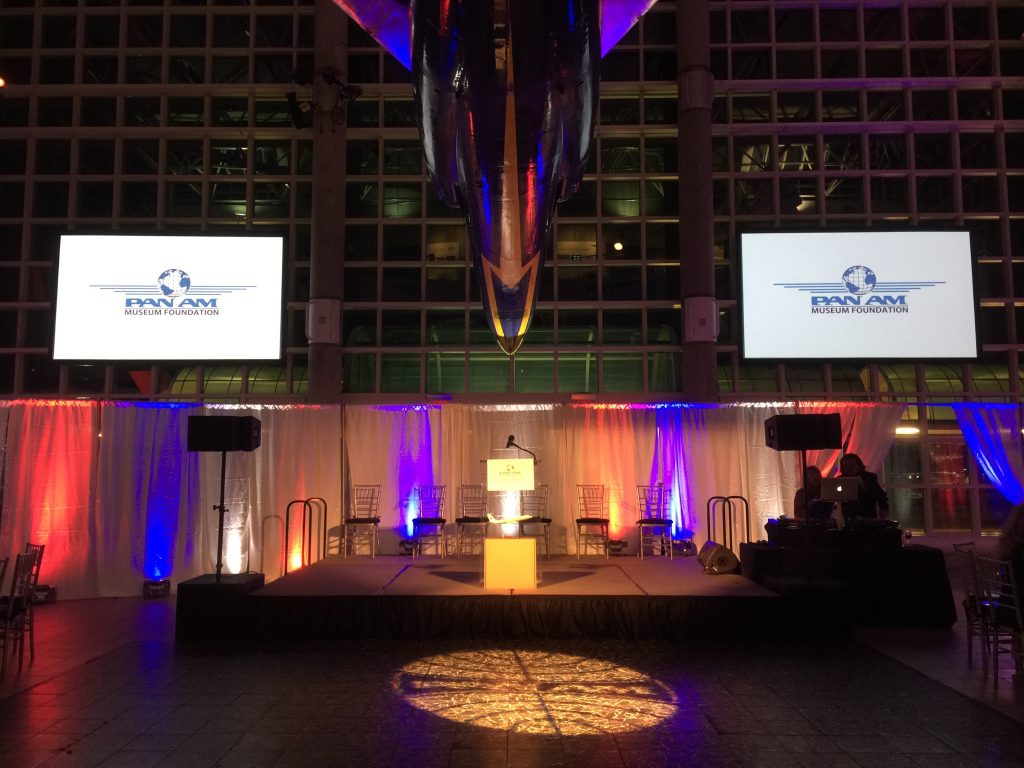 The Pan Am name and logo could be seen anywhere you looked on Saturday night. (Photo: AirlineGeeks | Tom Pallini)

AirlineGeeks was invited by Metropolitan Airport News, a local news service that focuses on New York’s 3 main airports as well as Stewart International Airport in Newburgh, N.Y. Walking into the gala, former Pan Am flight attendants, dressed in their former blue and white uniforms, still as iconic and instantly recognizable as ever, greeted attendees. 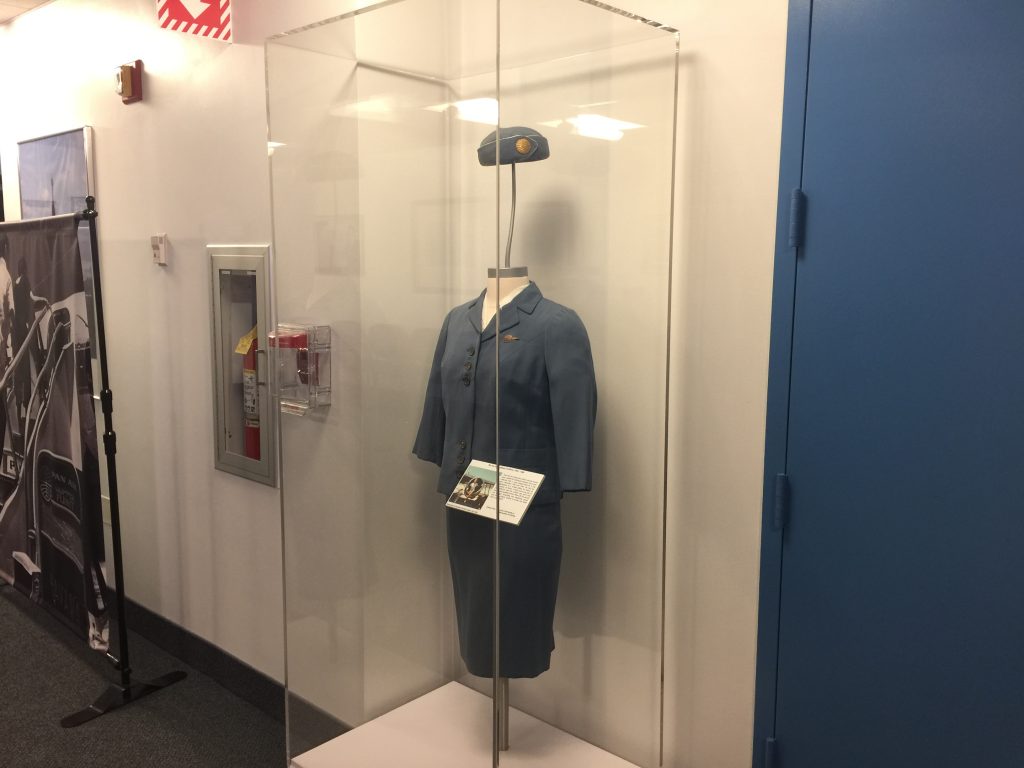 Once in the gala, the room was filled with former employees of the world airline regaling guests with age-old stories of their service. No matter their position, each person was critical to the success of the airline for so many years. Now, they actively strive to preserve and promote the history and legacy of Pan Am through events and museum exhibits like these.

Although the group is diverse, with former employees coming from all areas of the world, they keep together via social media and email, planning events and gatherings such as this one. United under the Pan Am Foundation, co-chaired by Linda Freire and Joanne Swift, they gathered tonight to honor the legacy of the Boeing 707, Pan Am’s first jet aircraft nearing the 60th anniversary of its launch, and mark the opening of the Cradle of Aviation’s second Pan Am exhibit on the third floor of its main building. 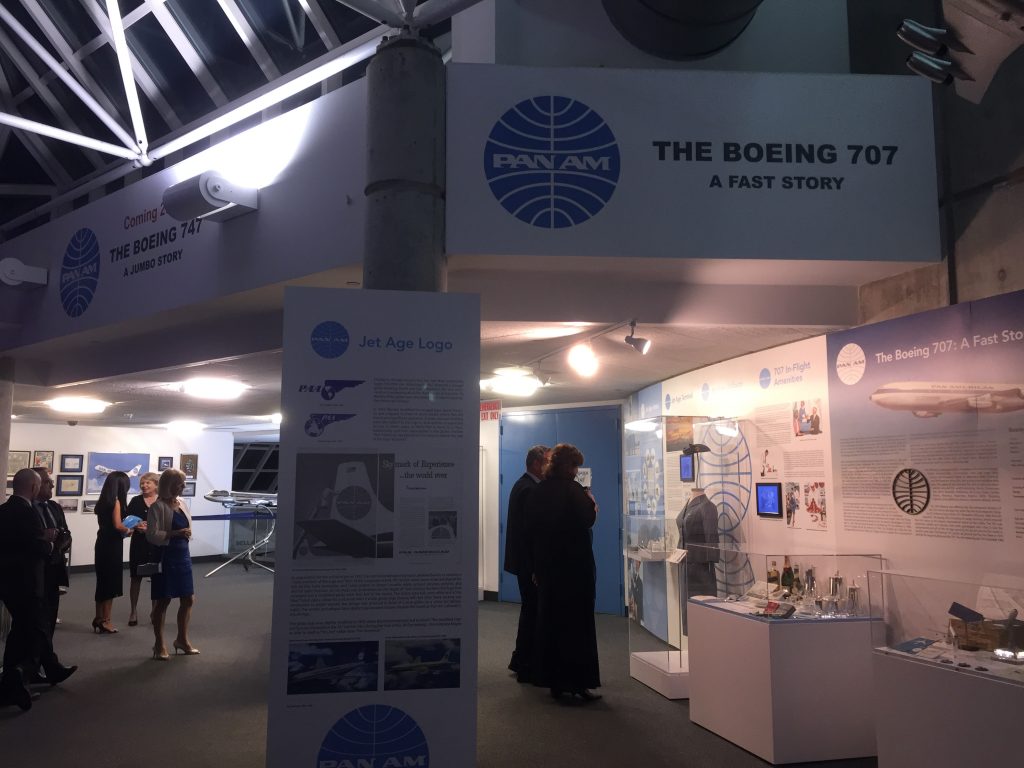 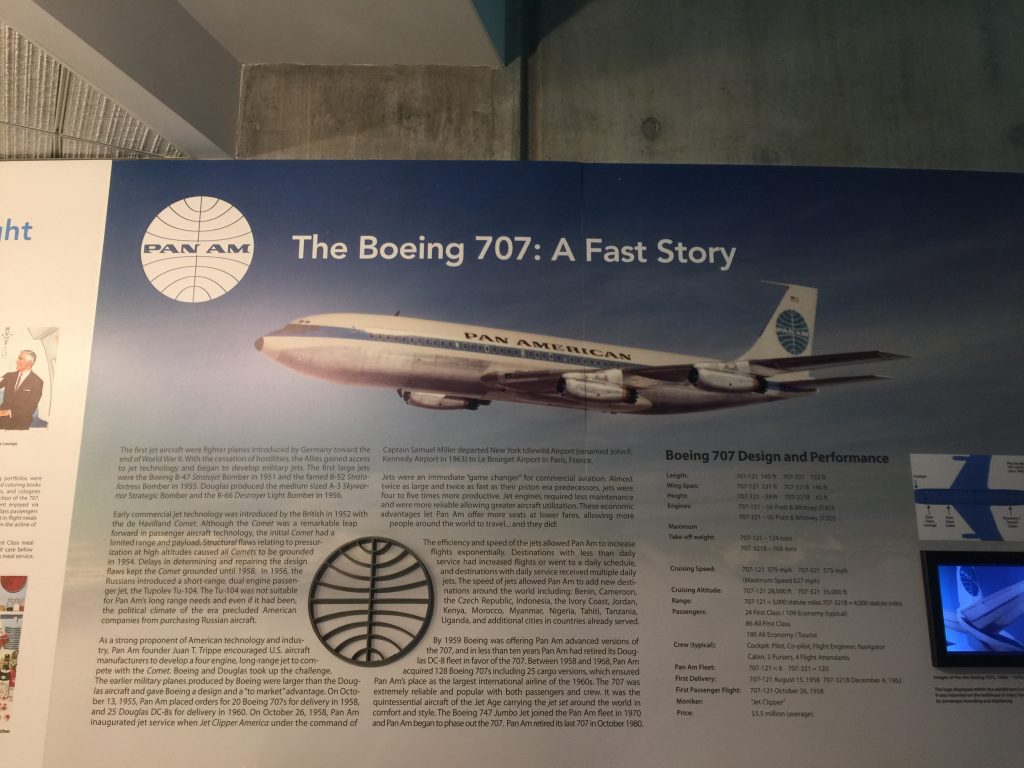 The Pan Am Museum at the Cradle of Aviation’s newest exhibit, The Boeing 707: A Fast Story. (Photo: AirlineGeeks | Tom Pallini)

Once the dinner started, New York Times-featured aviation reporter Christine Negroni, acting as the emcee for the night, welcomed us all and a video about Pan Am and the Boeing 707 was showed. The theme for the night was Bonjour Paris to commemorate the first flight of the Boeing 707 for Pan Am from Idlewild Airport in New York to Le Bourget Airport in Paris, the precursor to Charles de Gaulle and Orly airports.

Pan Am was the launch customer for the legendary quad engine, single-aisle aircraft that would serve as the precursor to the Boeing 747, first flying it in October 1958. One of its first flights saw the aircraft reposition from its base at New York’s Idlewild Airport to what is now Washington Dulles International Airport, where it was received by President Dwight D. Eisenhower, First Lady Mrs. Eisenhower and the Cabinet of the United States of America. Once the aircraft was christened by the First Lady, the jet age for Pan Am and the aviation industry had begun. 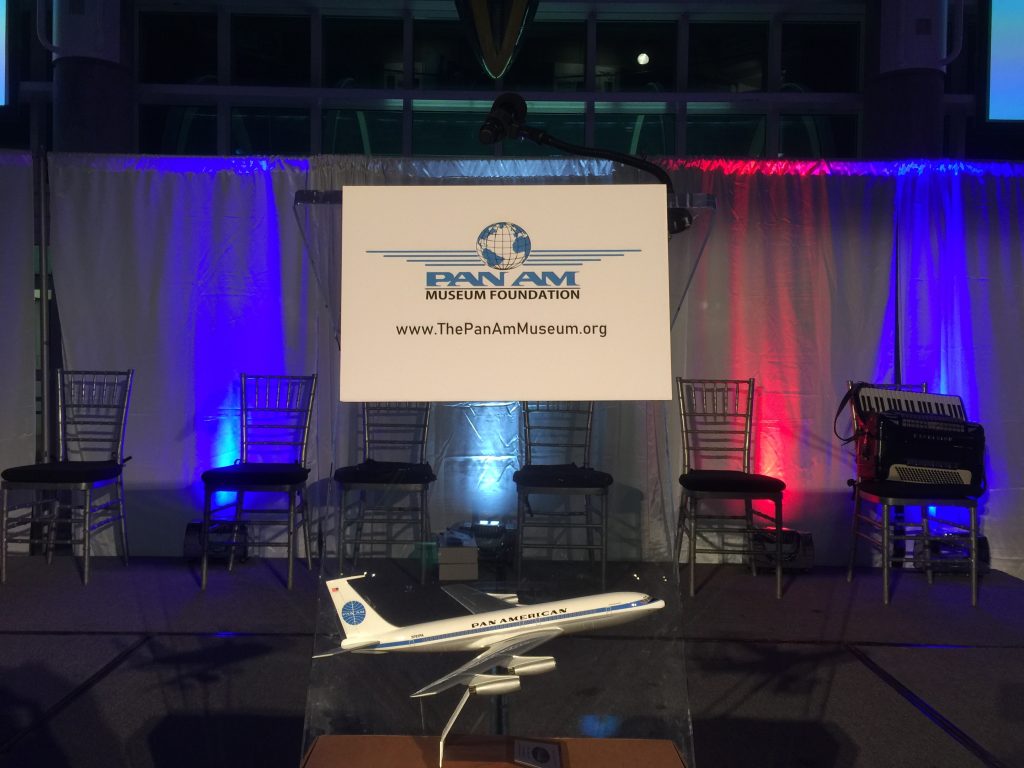 One of Pan Am’s flight attendants who was on the first flight and was the face of Pan Am for a short period during the 1950s who was on the first flight from New York to Washington, Helen Jones Lea, was honored at the gala, as well as numerous other key Pan Am faces and figures that worked for the airline during its tenure serving not only the United States, but the entire world. As one of its advertisements stated, each country had its own airline, but the world had Pan Am.

The keynote speaker for the evening was Frank Abagnale Jr., the former con artist turned FBI consultant that was the focus of the hit Steven Spielberg movie Catch Me If You Can starring Leonardo DiCaprio. During his speech, Abagnale outlined the true history of his life, separating Hollywood’s version of facts from his own. 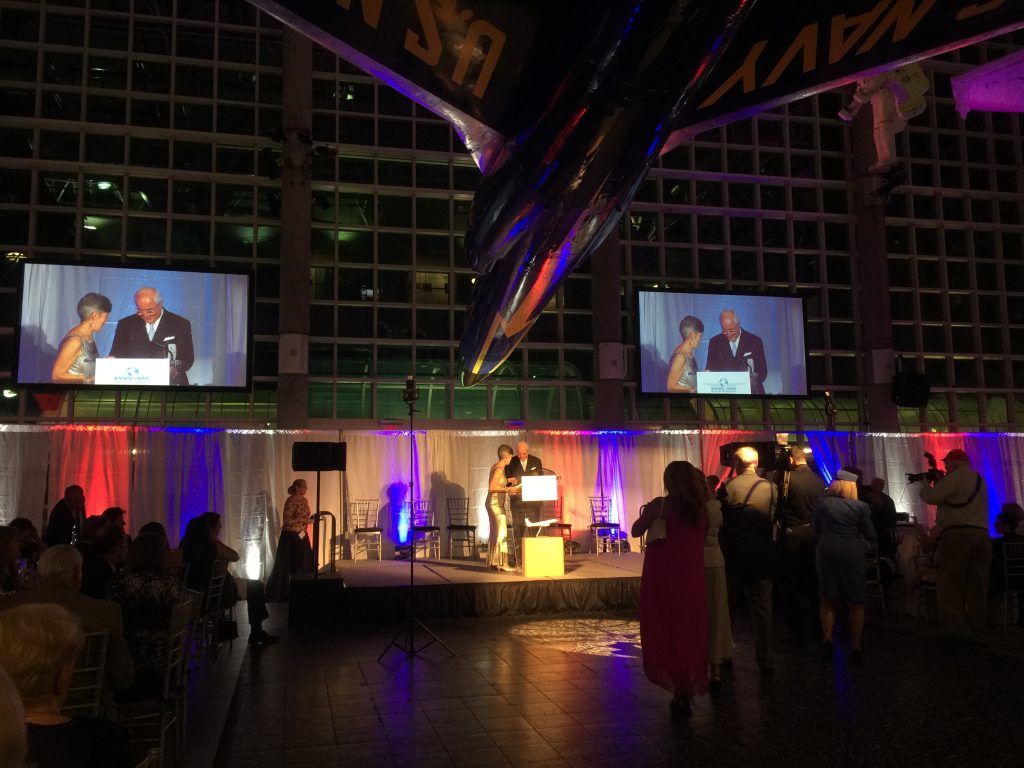 Although Abagnale posed as a Pan Am pilot to secure free travel and lodging, the Pan Am family gathered at the event welcomed him in with open arms. After all, despite posing as a Pan Am first officer, Abagnale never flew on a Pan Am flight for fear that he would be outed as a fraud. After a standing ovation, Abagnale departed due to a prior engagement and the night’s festivities continued.

Several key figures at Pan Am were honored, each with their own unique story that saw them at the forefront of history with the airline. While one would relish the opportunity to be alive and present during one of their stories, they didn’t know they were making history at the time, they were just doing their jobs.

Stories of Juan Trippe, the Worldport at JFK, the Pan Am Building in Midtown Manhattan and the arrival of the Boeing 707 were just some of the topics featured that night. A chef even recreated the famous flaming Cherries Jubilee found on Pan Am flights. 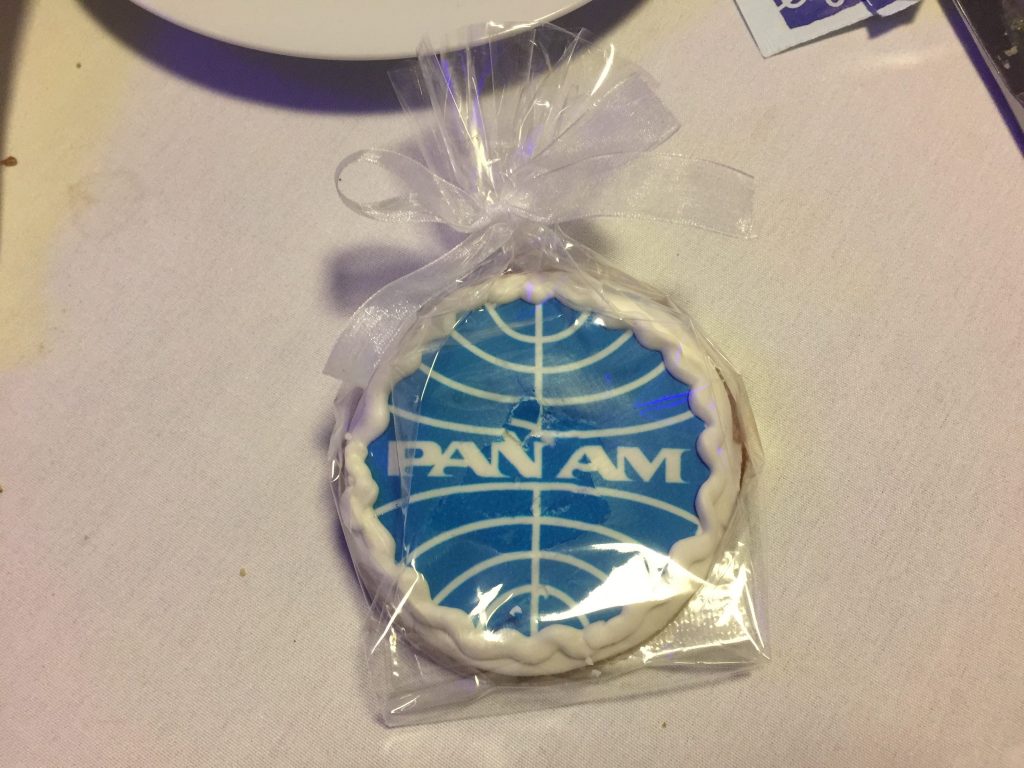 Even the cookies were Pan Am-themed. (Photo: AirlineGeeks | Tom Pallini)

To end the night, French-style can-can dancers took to the dance floor, further igniting a sense of nostalgia, and performed the lively French dance. Soon after, nearly all attendees were on the dance floor and dancing as if it was 1958 again. 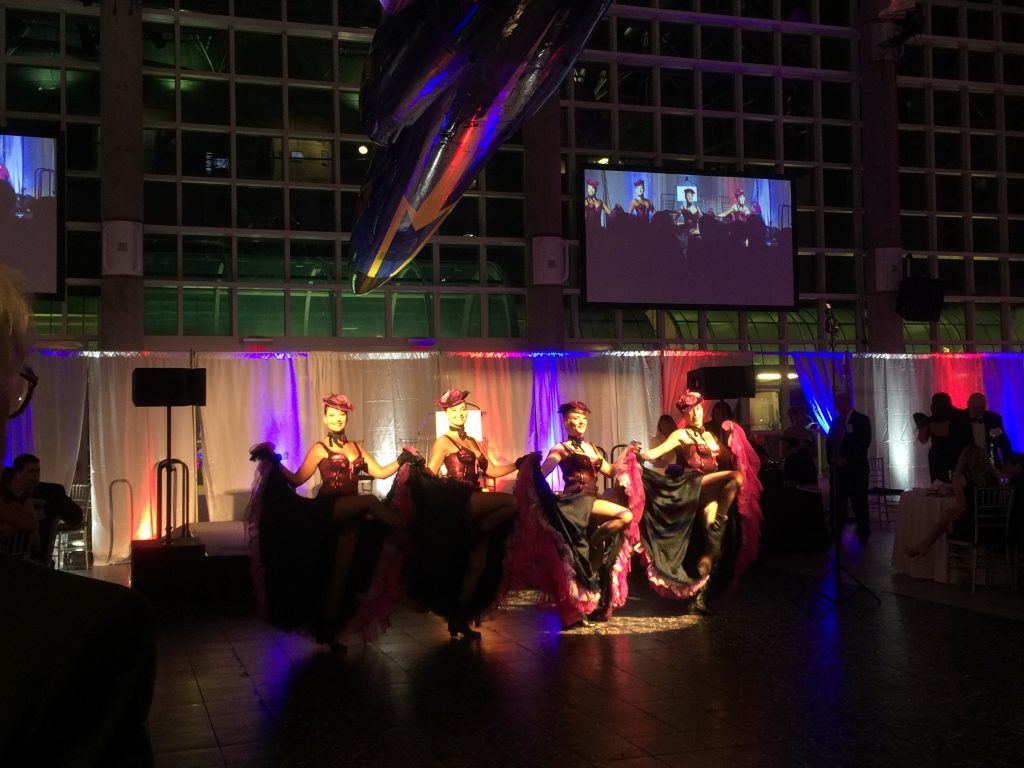 While the airline may have ceased operations at 9:05 a.m. on Dec. 4, 1991, the legacy of Pan American World Airways lives on through its former employees and the Pan Am Museum Foundation.