The tail of N825HK, one of five E-145s in the Via Airlines fleet. (Photo: AirlineGeeks | Mateen Kontoravdis)

Via Airlines Adds 7 New Routes in Largest Expansion Yet

Coming off the back of carriers such as Frontier Airlines and Sun Country Airlines announcing large route expansions over the past few days, Via Airlines has joined the fun, announcing five new destinations joining its route network later this year. The carrier claims this is its largest expansion yet, with new focus cities in Memphis, Tenn., Pittsburgh, Pa. and Birmingham, Ala. planned.

Raleigh, Memphis, Birmingham, Pittsburgh and Hartford will be Via’s newest cities, bringing its total destination count to 19. In total, seven new routes will be added while prior to the announcement, the airline was operating 14 routes from its two hubs in Austin and Orlando.

Various airports celebrated the privately held regional carrier’s announcements of the new routes. As the airline held press events at new destinations, a spokesperson in Pittsburgh hinted at more big news in the future stating that the airline expects to double its fleet and employees in the next year and a half or so. Currently, Via Airlines employes about 150 people and operates eight planes including five ERJ-145s and three EMB-120s. All new routes will be operated using the airline’s 50-seat Embraer ERJ-145 aircraft as the EMB-120s are typically used for charter operations. 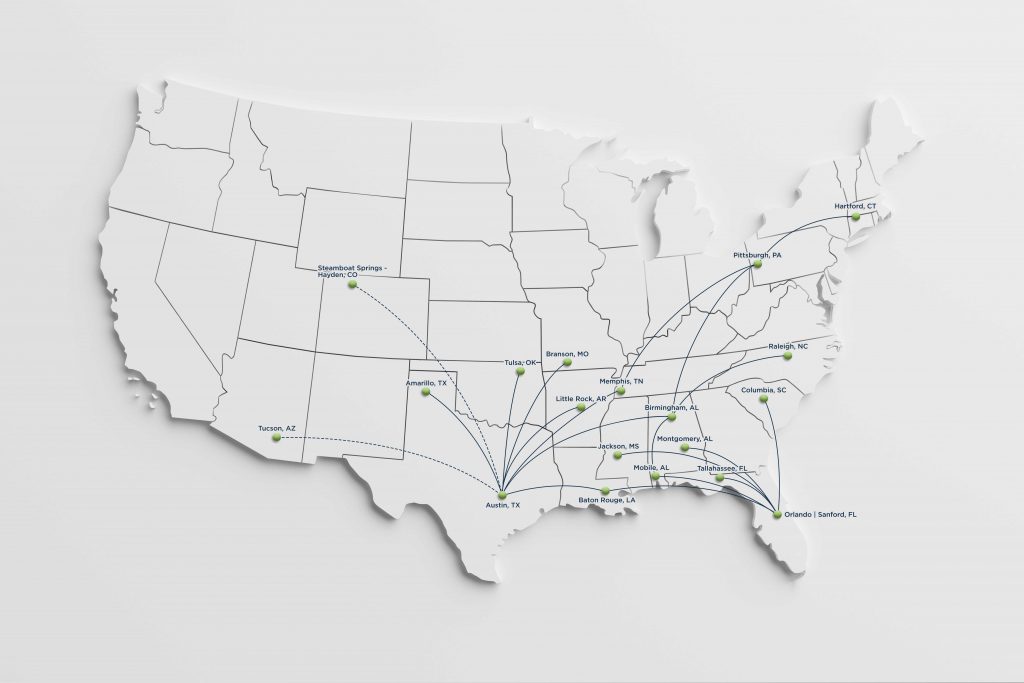 Raleigh-Durham Airport Authority President and CEO Michael Landguth showed excitement about the new route, saying: “We are excited to welcome Via Airlines to RDU and the Research Triangle community. Via service between Raleigh-Durham and Birmingham will strengthen the connectivity between our two vibrant business communities.”

Via Airlines will be the sixth airline serving Birmingham and the airline will not face competition on any of the routes it plans to serve.

“Working together with the business community, we were very strategic in our approach to gain nonstop service to the selected cities,” said Sylvester Lavender, Birmingham Airport Authority’s Interim President and CEO. “From the aerospace industry in Mobile to the innovative technology scene in Austin and Pittsburgh and to the inspiring, bold ideas of the research park in Raleigh, we are making it easier for Birmingham to connect with more economic opportunities, strengthening businesses and partnerships with those communities.”

From Memphis, two cities will be served as Via Airlines continues its expansion efforts throughout the Midwest and the Northeastern U.S. Flights to both Austin and Pittsburgh will commence on June 25, 2019, from Memphis, with all services operated four times weekly on Mondays, Tuesdays, Wednesdays and Fridays using the ERJ-145.

The Memphis routes will provide a through service for passengers traveling between Austin and Pittsburgh. The aircraft will leave Austin at 8:15 a.m. CST and arrive in Memphis just before 10 a.m., continuing on to Pittsburgh at 10:20 a.m. and arriving in the Steel City at 1:09 p.m. The aircraft will then return to Memphis at 2:21 p.m. before carrying on to Austin at 5:27 p.m.

“Pittsburgh is an amazing city and we’re elated to introduce nonstop service to both its business and leisure travelers to/from Birmingham, Memphis and Hartford,” said Don Bowman, Via Airlines’ Director of Business Development.

“Nonstop service not only helps travelers move to and from these destinations faster and more economically than existing options, including traveling by car but also ensures the opportunity for our own steady growth and continued provision of reliable service for the Pittsburgh market and beyond.”

In addition to nonstop flights to Memphis and one-stop service to Austin, Via also announced plans to serve Birmingham and Hartford from Pittsburgh. Flights to Birmingham will commence on April 11, operating on Mondays, Tuesdays, Thursdays and Fridays. Flights will arrive in the Steel City at 11:36 a.m. and depart back for Birmingham at 12:06 p.m.

Via’s Senior VP for Business Development Don Bowman said these routes are the first step for Pittsburgh, saying: “We hope in two or three months to have a similar announcement with four more cities we’re looking at.” 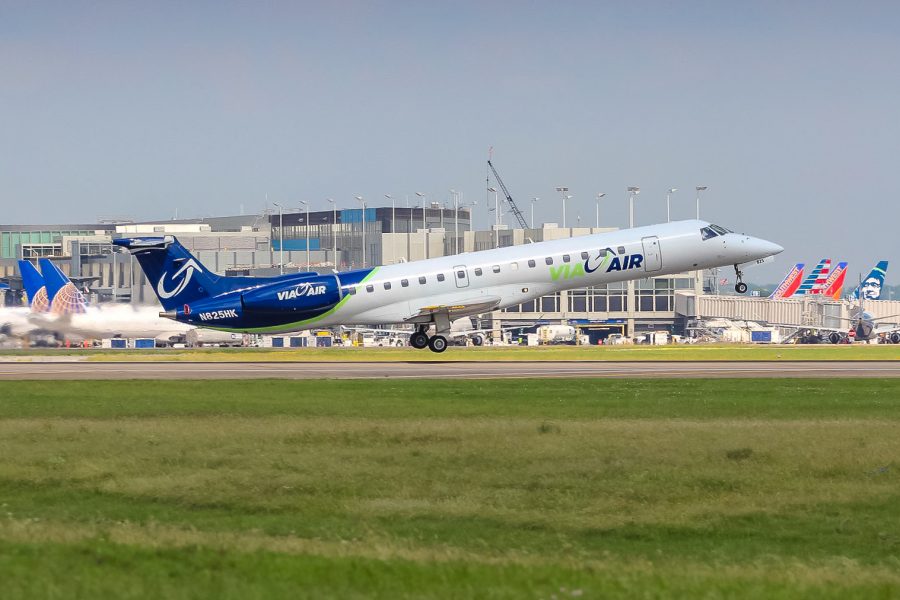 In addition to the new flights, Via began promoting a corporate incentive program today. The airline hopes to gain support for its new routes through business partners who can pre-purchase tickets as vouchers for all routes. Tickets can be purchased in bulk as discounts are calculated based on the number of vouchers purchased.

Following these route announcements, Austin and Orlando Sanford will remain the carrier’s largest hubs by routes served. At all press events today, the airline boasted about even more growth and new route announcements to be expected in the near future. While the airline did not mention any specific cities for future expansion, it is evident that Via Airlines is targeting point to point traffic between mid-size U.S. cities.

Kenya Airways recently launched a New Distribution Capabilities system (NDC), which will modernize the way air products are retailed to travel agents, corporations and travelers. The web-based distribution solution seeks to encourage travel agencies and travelers to sell and access more content and ancillaries like extra baggage and preferred seats.…