Spending the Day with American Airlines in Roswell, N.M.

It comes as no surprise to many that American Airlines has opted to retire its MD-80 fleet. As the ‘Mad Dogs’ climbed higher in age and were no longer fuel-efficient compared to newer entrants, it was only a matter of time before the decision was made for the aircraft to be sent to the “boneyard” in Roswell, N.M.

A Day of Events

Given that the aircraft was at one point the backbone of American’s fleet, it seemed fitting for the airline to host a series of events to commemorate the special occasion. While AirlineGeeks’ founder Ryan Ewing was able to fly on the last commercial flight, I was tasked with braving the desert sun and being on one of the ferry flights. Both events started the same with a celebration of food, balloons, a DJ and special guests to kick things off.

After the last commercial flight departed Dallas/Fort Worth for Chicago O’Hare, it was not long after that 120 selected team members at American Airlines boarded their own flight to Roswell. In turn, media representatives boarded a separate flight onboard aircraft N9615W, which had been delivered to TWA in 1997 before joining the American fleet in 2001. In a nod to the aircraft’s last departure, the pilots rocked the aircraft’s wings, a friendly goodbye to an airport this plane frequented. Following a 65-minute flight, it was time to see where aircraft go to retire. 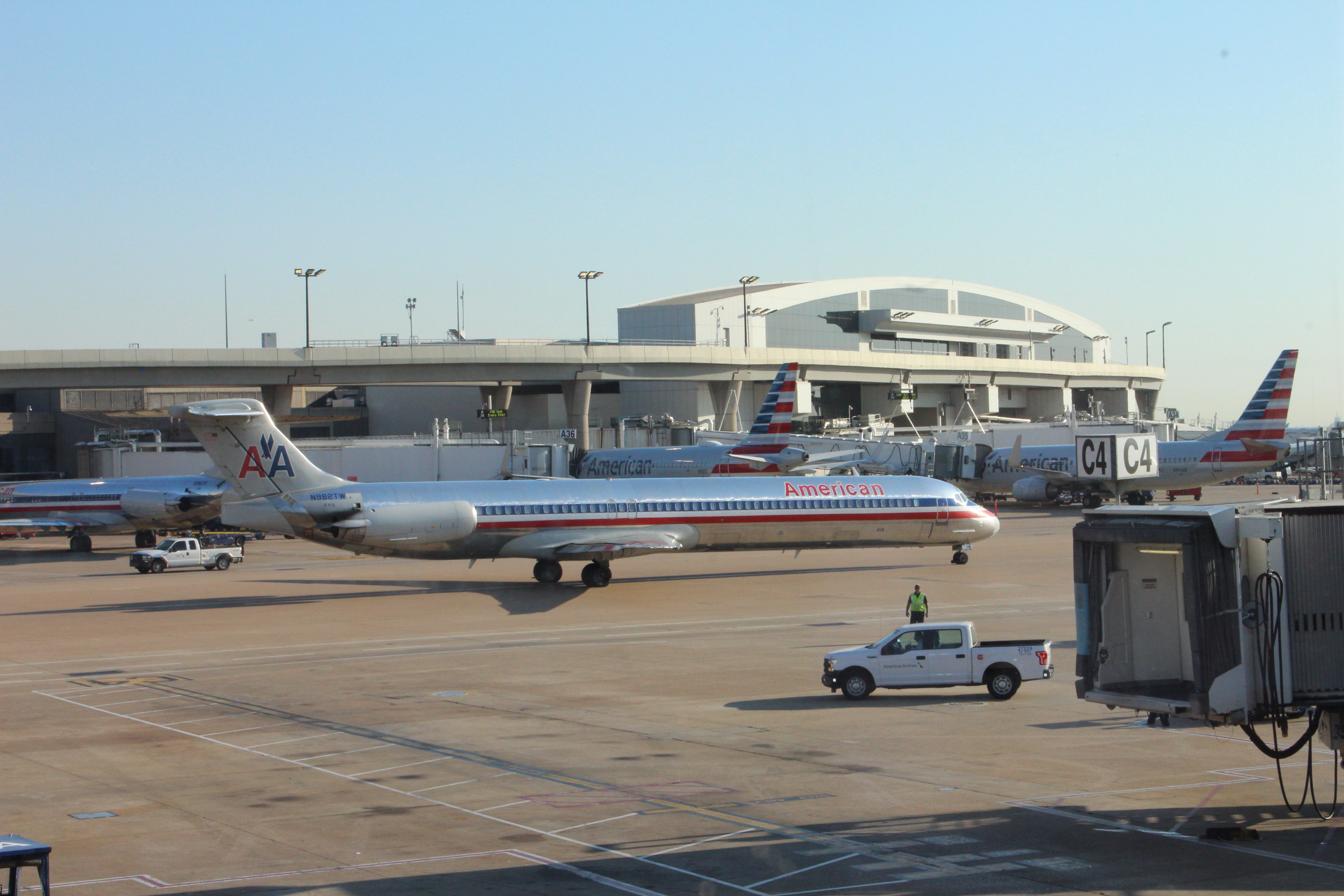 Shortly after landing, our aircraft took the long way around the airport with the pilot identifying several notable aircraft such as Elvis Presley’s vintage Lockheed Jetstar, Saudia’s Boeing 747 and Scoot’s Boeing 777. Perhaps surprising to some, but one type of aircraft stood out from all the others. With the Boeing 737 MAX issues still without a resolution date, American has opted to park several of its aircraft in Roswell until they can fly passengers again. 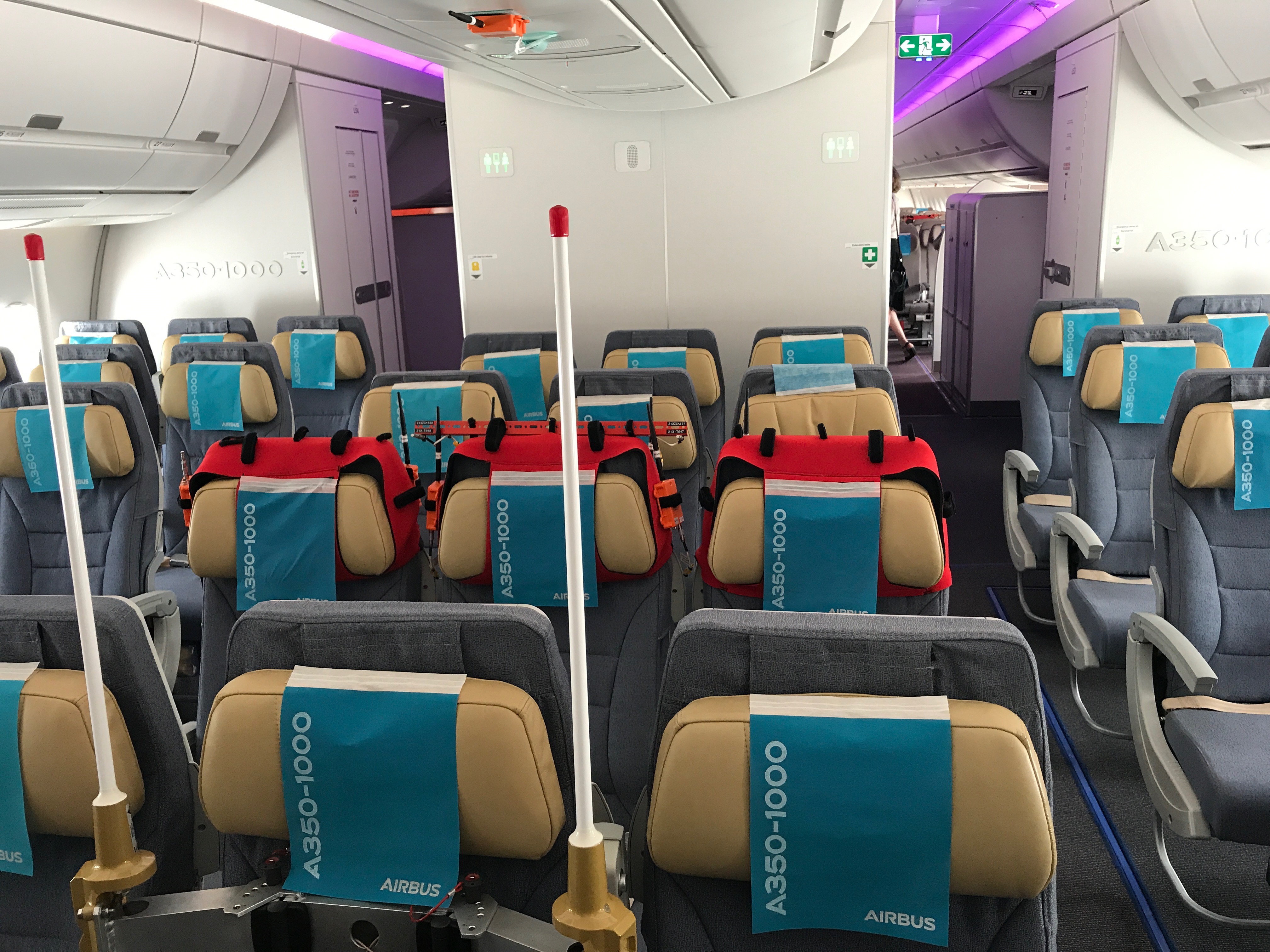 Of course, it wouldn’t be a trip to Roswell without seeing many more MD-80 aircraft. While I certainly couldn’t count the number on display, it was evident that each aircraft had its own story based on the wear and tear to each. Besides the newly added Mad Dogs, all older aircraft had their engine removed. Some had more significant damage that was likely the result of being left to nature for some time. 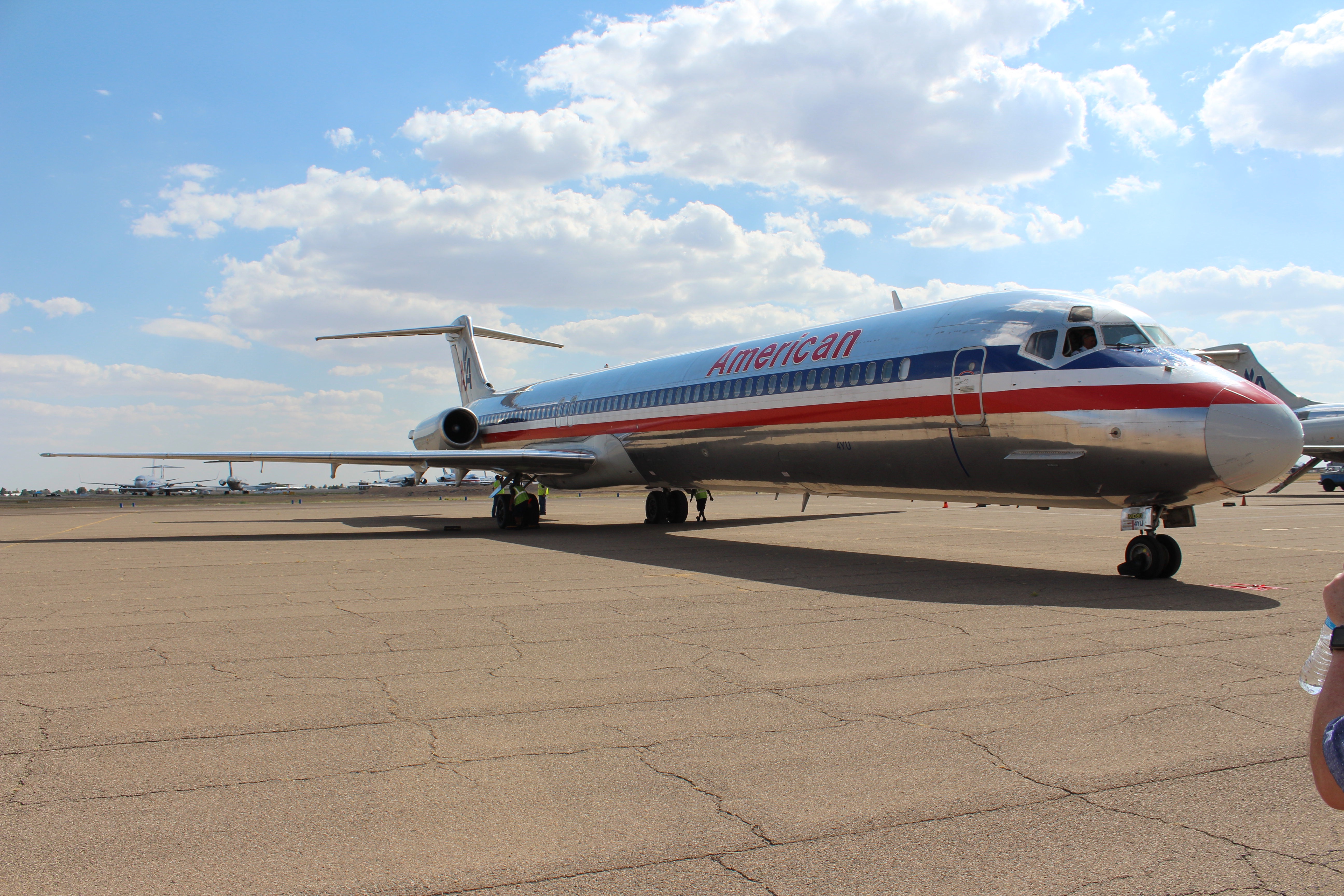 Following our lap around the airport, it was time to settle in at the hangar. All passengers deplaned out the stairs in the back of the aircraft only to walk into a celebration. All of the team members had already arrived and were busy eating BBQ inside the hangar while reminiscing on MD-80 stories. 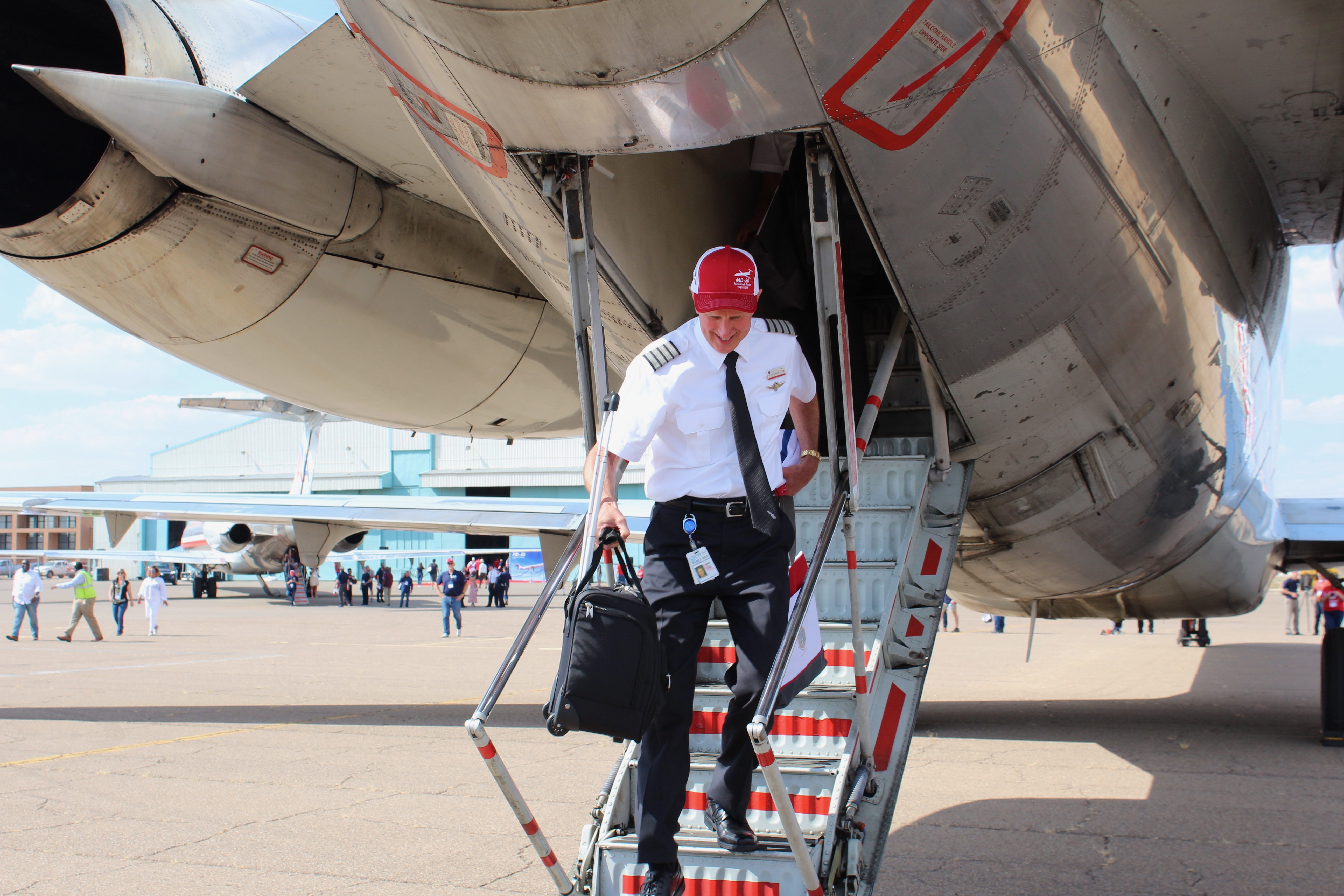 Unique Stories and Bonds with the MD-80

Not long after arriving, the official program began to take place as three individuals shared their stories on why the MD-80 had such importance in their lives. For one individual, the aircraft was the last trip he made with his father and has since developed a tradition where he took his own son and nephew on an MD-80 flight over a recent weekend.

Another individual spoke on how during her career at American she has lived through the life of the MD-80, playing a role in its introduction to the fleet as well as its now retirement. 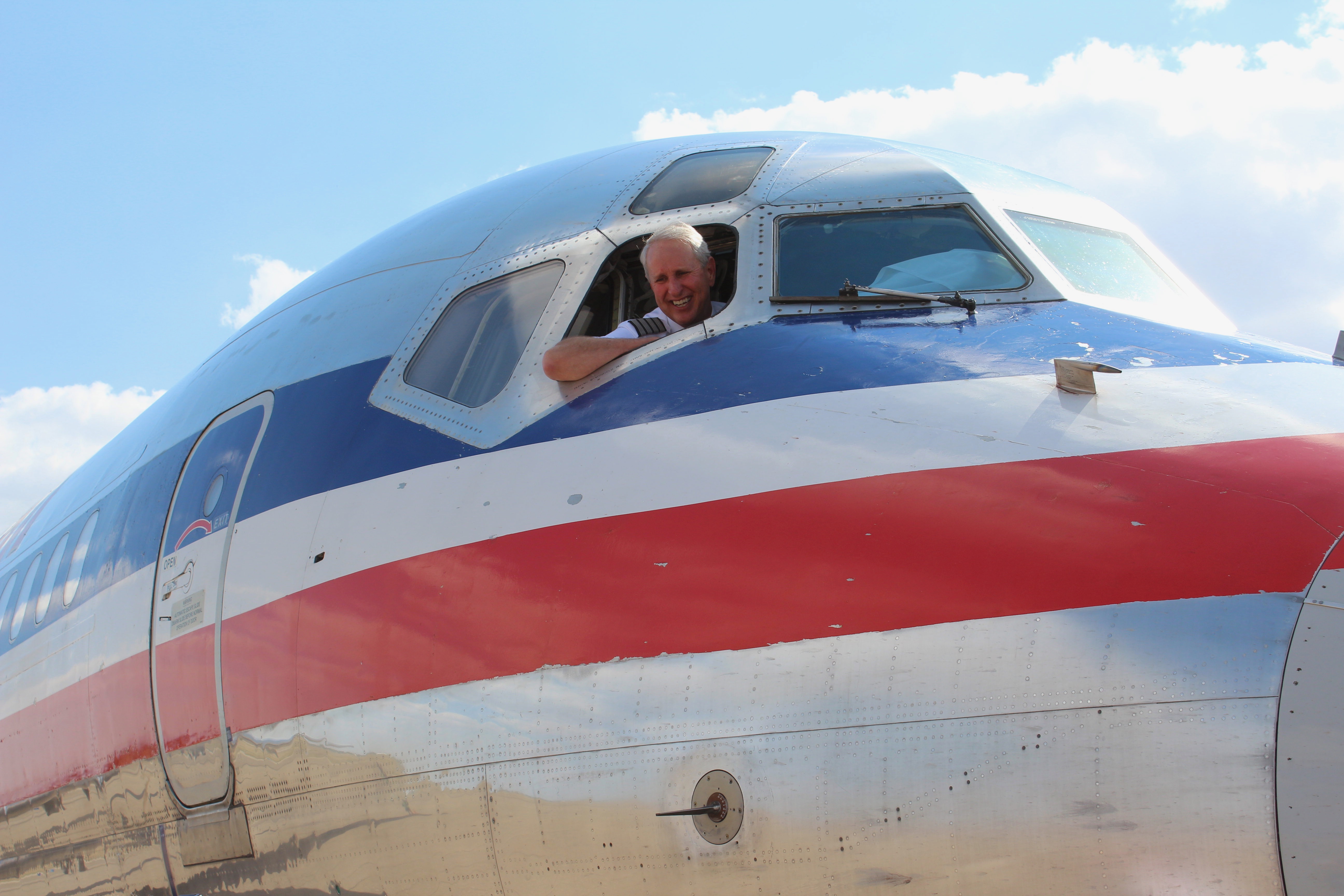 To close off the organized speeches, American’s CEO Doug Parker shared a few words on how the aircraft has been a backbone for the airline and has served as a special connection for many people. However, he also optimistically noted how the retirement of the MD-80s brings opportunity to continue introducing new aircraft that customers and employees alike will love.

As timing would have it, the program was finished, and it was time to rush outside to see another ferry flight arrive in Roswell. This would continue for several hours as one-by-one, another MD-80 would arrive and pilots would meet excited employees and media attendees. Everyone was quickly invited onboard for the opportunity to take a few more photos inside the cockpit, the infamous last row of seats next to the engine or the cargo hold. 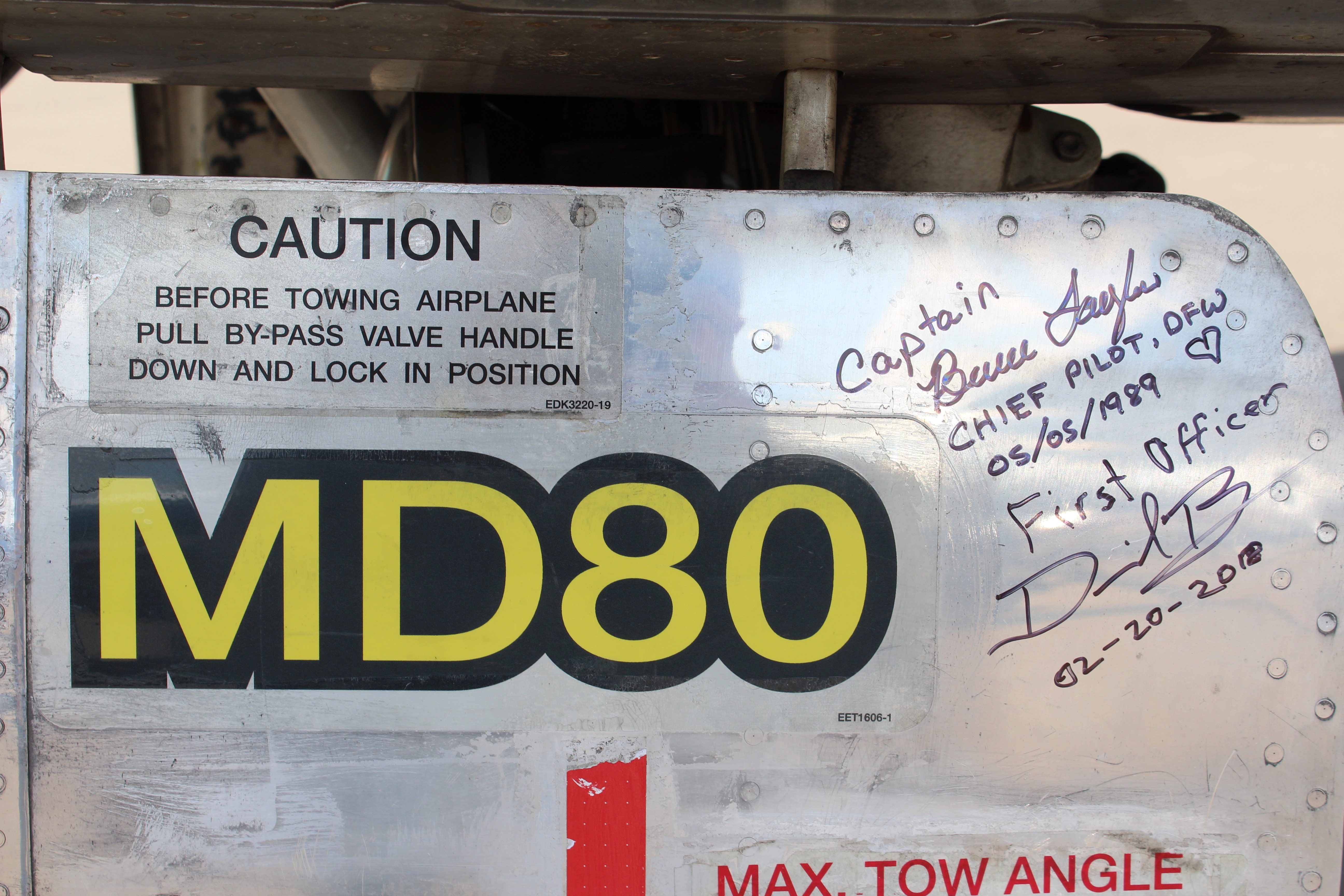 As fleet captain for the MD-80, Greg Kunasek was especially proud to have the opportunity to ferry the last aircraft in. During the final flight from Chicago to Roswell, Kunasek mentioned how even air traffic control got in on the fun of the retirement, wishing him “God speed, good luck and thank you to the Mad Dog.” In typical retirement fashion, pilots for each final flight were encouraged to sign the aircraft, along with Kunesak and Captain Clint Beedle signing a special flag highlighting the retirement.

Not long after the final aircraft arrived, it was time for guests to head home to their respective cities, catching one of several flights out of Roswell.

Given the size of American’s MD-80 flight, it’s no surprise that many have had the opportunity to travel onboard the aircraft. While the aircraft may have retired for now to Roswell, the memory is expected to fade quickly for those who long for the days of 2-3 economy seating (unless you are flying on the Airbus A220 of course!). The boneyard marks the end of an era, but also the beginning of new aircraft, new challenges and hopeful futures.

Air China released its 2021 third quarter earnings Wednesday, revealing 7% growth in capacity — measured in available seat kilometers (ASK) — versus the same period In 2020, remarkably lower than the 26% growth recorded in previous quarters of 2021. The decelerated pace was anticipated as China has endured multiple…

Minneapolis-based Sun Country Airlines has announced another route expansion, including service to seven new cities. The expansion also comes as…