Onboard the Final Flight: Qantas Transfers Newly-Retired Boeing 747 to Rolls-Royce

Continuing its gradual retirement of the type, Qantas parted ways with another Boeing 747-400 on Tuesday. The airline’s latest Boeing 747 to be sent to the United States was VH-OJU named Lord Howe Island, a near-20-year-old Qantas veteran and one of its longest-serving global ambassadors at the time of its exit. 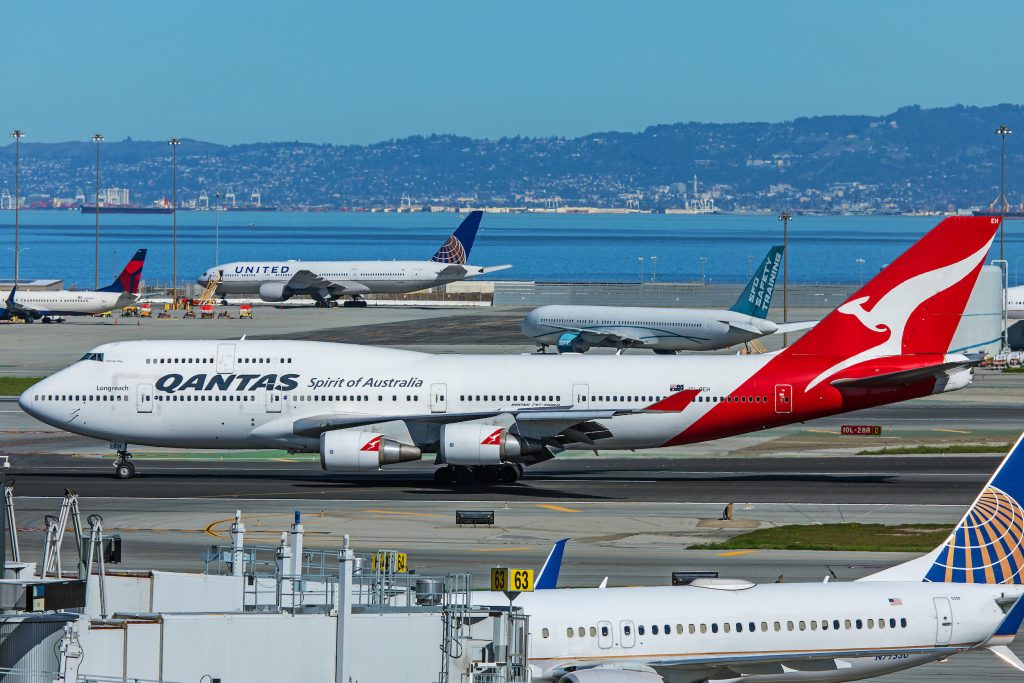 Departing from Sydney just after 5 p.m. on Sunday, OJU flew 13 of its final 15 hours for Qantas from Sydney stateside to Los Angeles. In the days leading up to its farewell flight, the Jumbo Jet had flown from Sydney to destinations such as Tokyo, Johannesburg, San Francisco and Santiago, cities that will no longer see a Qantas 747 in just over a years’ time.

While the Boeing 747 has long since been retired from the Sydney-Los Angeles route in favor of the newer Airbus A380, this final transpacific flight was special as Qantas operated it as a “points plane.” The new concept opens up special flights to Qantas Points frequent flyers and every seat on OJU’s final transpacific crossing was up for grabs using frequent flyer points ranging from 35,000 to 108,000 points, depending on the class of travel.

VH-OJU performed its first flight over 19 years ago on Jan. 8, 2000 and has since flown over 90,000 flight hours and 70 million kilometers, translating to roughly 100 round trips to the moon. Joining when Qantas’ Boeing 747-400 fleet was in its heyday, the aircraft carried over 2.5 million passengers during a career spent entirely in the Australian national carrier’s fleet.

An Opportunity to Continue Serving the Industry

Instead of being flown from Los Angeles to a final resting place at the Mojave Air and Space Port, where so many of her sisters landed for the final time, this lucky Australian Queen of the Skies headed north after landing in Los Angeles. Flying to Moses Lake, Wash. on Tuesday, OJU was not retired, but was given new life as she was handed over to her new owner, Rolls-Royce.

The well-known engine manufacturer took delivery of the aircraft on Tuesday after OJU spent Columbus Day Weekend in Qantas’ Los Angeles maintenance facility and plans to refresh and repurpose the 747 as an engine testbed. The new home is fitting for the aircraft considering OJU is powered by four company built RB211, the last in Qantas’ fleet to feature the engine before exiting. 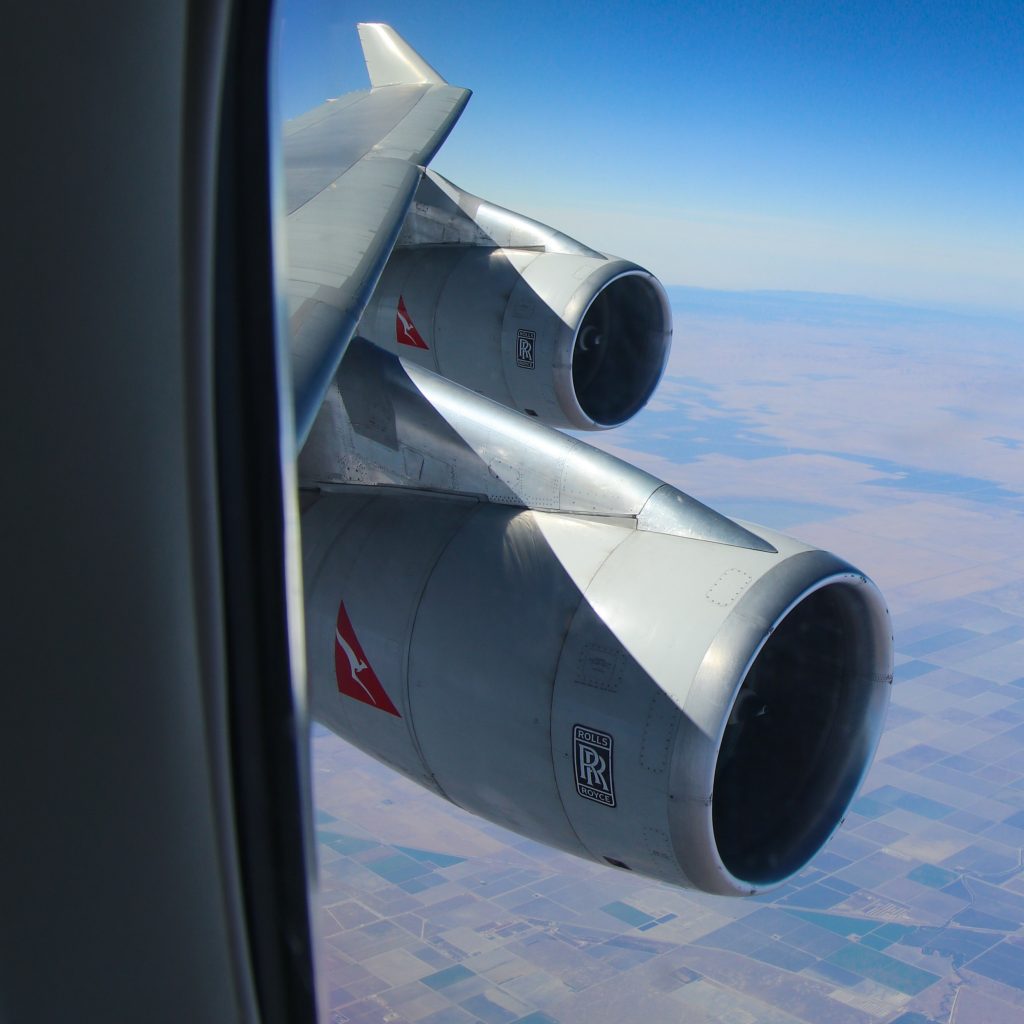 Qantas officially handed over the keys to Rolls Royce at a ceremony in Moses Lake, but before Rolls-Royce can start flying the aircraft, it will need to be stripped down, gutted and refitted. That process will be handled by AeroTec, an aerospace engineering firm with facilities at the Moses Lake Flight Test Center. 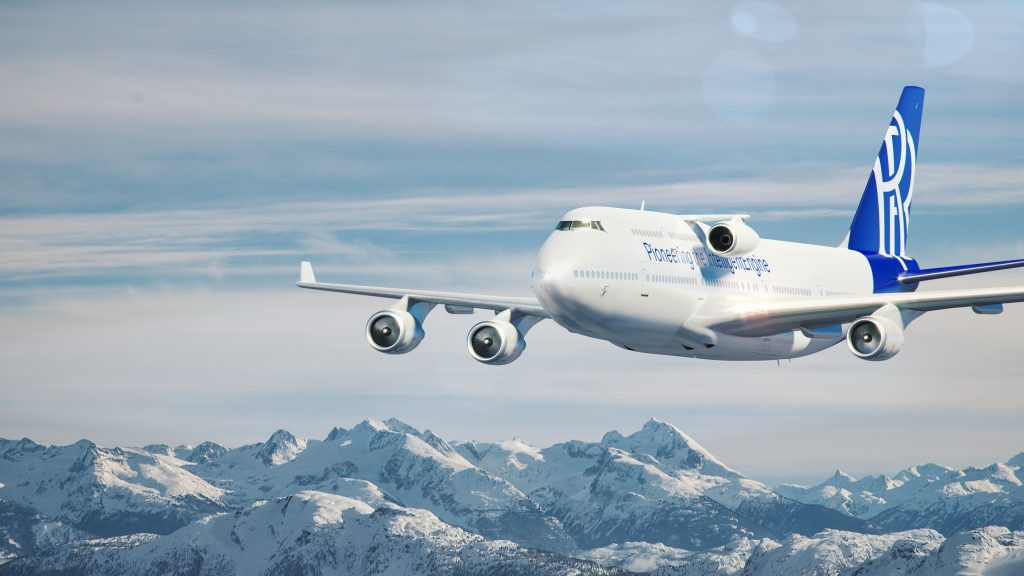 Testbed aircraft are designed to test new engines by attaching them to existing aircraft and flying around with them. (Photo: Rolls-Royce)

“The Queen of the Skies will become the jewel in the crown of our global test programs,” said Gareth Hedicker, Rolls-Royce, Director of Development and Experimental Engineering. “This is a significant investment that will expand our world-leading test capabilities even further and will allow us to obtain more flight test data than ever before. After transporting millions of passengers on this beloved aircraft for 20 years, we’re excited to power it into the future.” 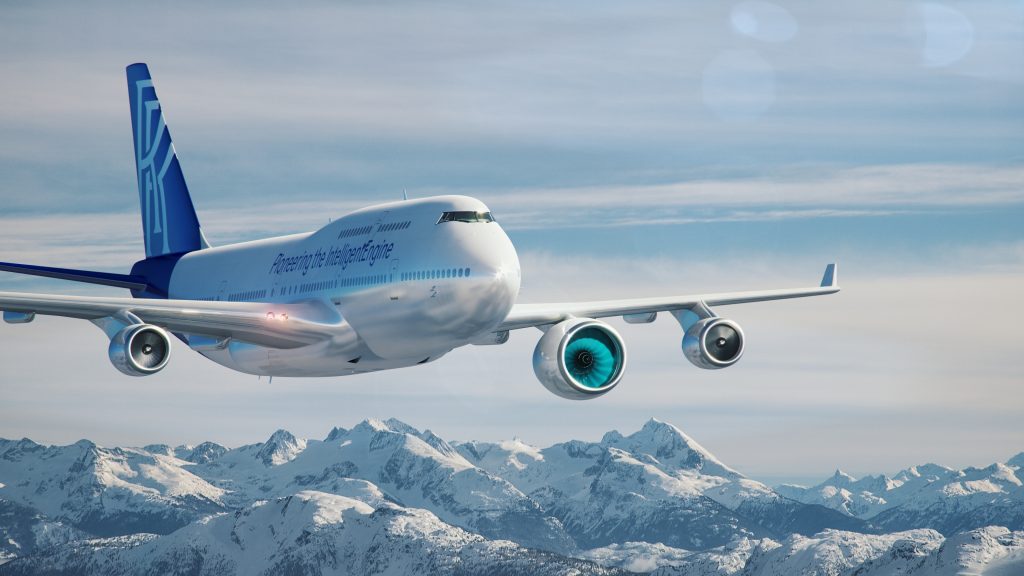 Engines on testbed aircraft can be attached to the fuselage or simply replace one of the under-wing engines. (Photo: Rolls-Royce)

All in all, Rolls-Royce is investing $70 million in the purchase, conversion, recertification and installation of instrumentation and data collecting equipment needed to test engines thoroughly in flight. This flying laboratory of sorts will improve its current jet engines as well as new engines and technology to improve the customer experience, increase efficiency and reduce emissions.

Onboard the Ferry Flight

After dropping its final revenue passengers off in Los Angeles on Oct. 13, the aircraft stayed the weekend at Qantas’ maintenance facility before ferrying up to Moses Lake. Typically, Qantas would fly its final 747 flights empty but invited a select group onboard to witness the flight that would end in the aircraft being transferred to Rolls Royce.

The aircraft, which just a week ago was carrying upwards of 300 passengers, was virtually empty as it departed from Los Angeles International Airport just after 10 a.m. Just 30 people, including the pilots and flight crew, were on a plane that normally carries 364. Calling it a ghost town would be an understatement. 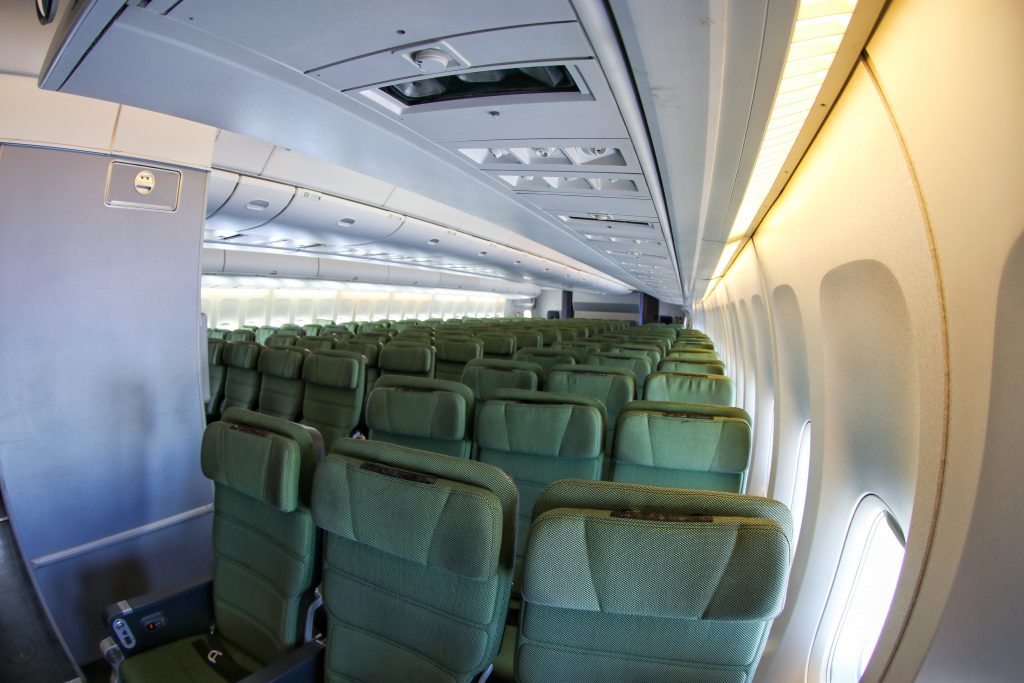 VH-OJU has transported millions of passengers to and from Australia since 2000. (Photo AirlineGeeks | Katie Bailey)

The desolation of the cabin evident in the aircraft’s takeoff. Only 126 knots were needed for OJU to rotate off Runway 24L for the near-2 hour journey up to Washington.

Walking through the empty aircraft, which faithfully served Qantas since the turn of the century, the interior definitely showed its age and why not, no reason for refurbishment when it’s due to retire. Now, after years of serving destinations as far away from Australia as possible including New York and London, OJU is finally getting its well-deserved rest. 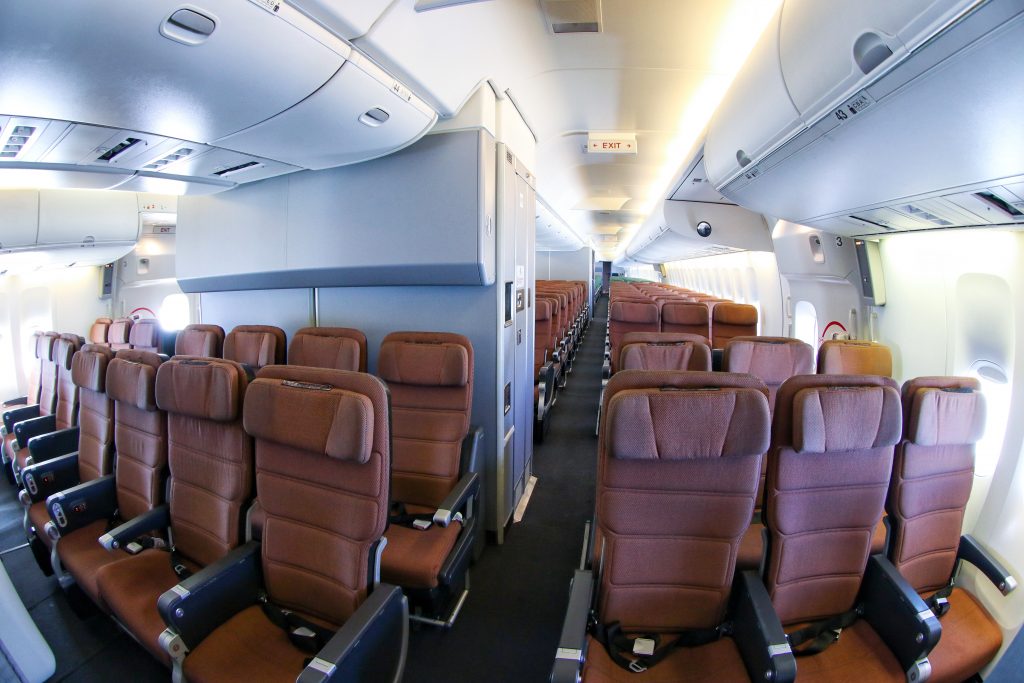 Only 30 of the 364 seats on VH-OJU were occupied for the flight to Moses Lake. (Photo AirlineGeeks | Katie Bailey)

Its final configuration before leaving Qantas was a three-class set up featuring business, premium economy and economy classes. Qantas was one of the few airlines to have business class seating in both the nose and the upper deck of its Boeing 747s as it phased out first class seating. 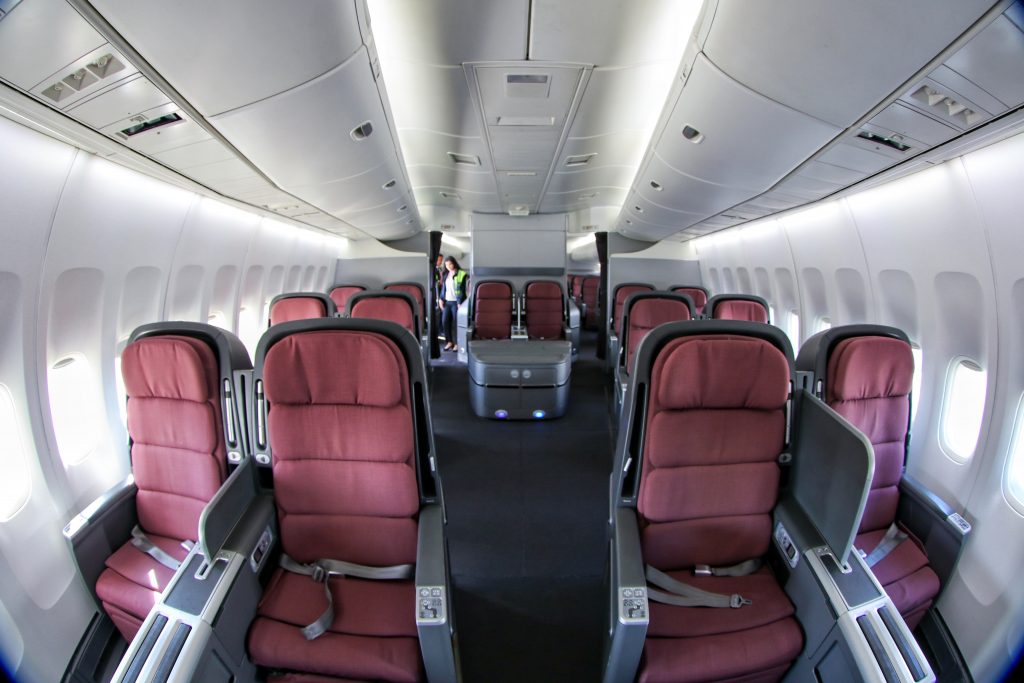 While Rolls-Royce won’t be needed all 364 seats, it won’t be quick to remove them either. To maintain the aircraft’s center of gravity, most of the seats will stay as they are and the memories embedded within will live on.

Even the in-flight entertainment system will remain, though not to entertain the onboard engineers. Rather, the system will allow the onboard crews to project the data they’re receiving throughout the cabin to train future aircraft engineers in-flight testing.

Some of the crew plans to retire when the last 747 retires towards the end of 2020, having spent large portions of their careers serving on the Queen of the Skies. Though not Captain Robert Nelson, a Qantas pilot on the ferry flight, who intends to stay flying. 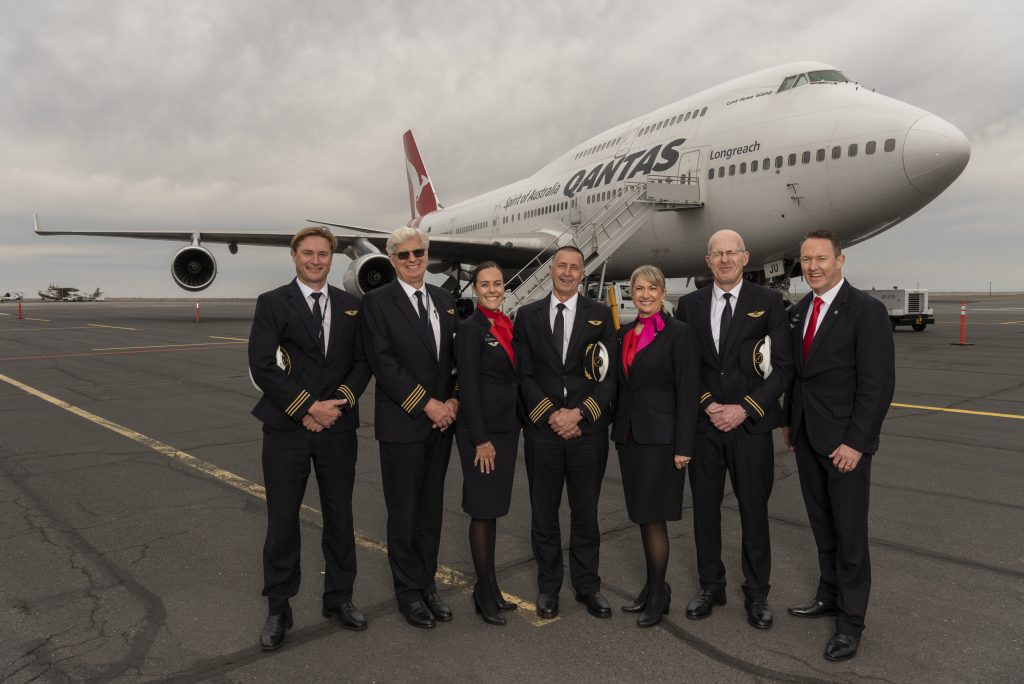 The crew of the ferry flight from Los Angeles to Moses Lake. (Photo: AeroTec)

“I’ll be moving to another aircraft, probably the 787, Qantas’s airplane of choice, a beautiful airplane, the future of Qantas,” said Nelson. “That’s why I look forward to keeping my flying career going.”

After the quick two-hour flight nearly straight north from Los Angeles, a mere warmup for the old-timer, Qantas flight 6021 arrived to fanfare in Moses Lake featuring a water cannon salute and a small group of AeroTec and Rolls Royce employees, media and Grant County officials. It was time for the final goodbye and everyone on the ground was eager to take a last look around inside the plane, especially the cockpit. 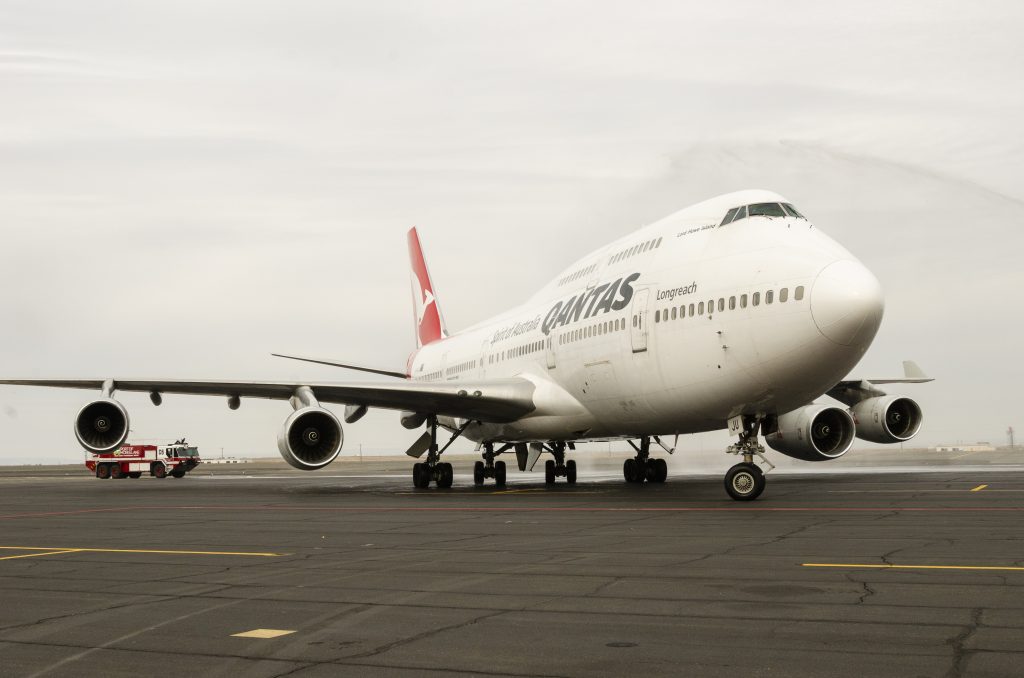 VH-OJU arriving in Moses Lake operating under a Qantas callsign for the final time. (Photo: AeroTec)

A small handoff ceremony between Qantas’ Captain Robert Nelson and Rolls-Royce’s Gareth Hedicker saw OJU officially depart from Qantas’ fleet. The keys from VH-OJU were given to Rolls-Royce and in turn, a silver trophy commemorating the delivery of the aircraft to Rolls-Royce was given to Qantas. 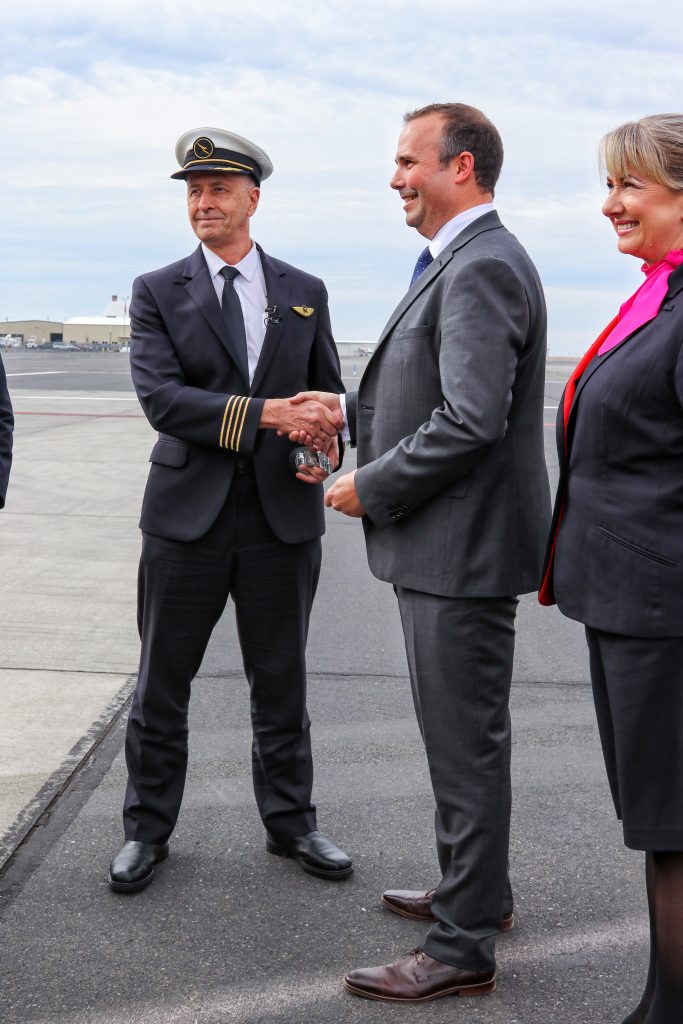 Qantas handing over the keys to VH_OJU to Rolls-Royce. (Photo: AirlineGeeks | Katie Bailey)

“Qantas clearly would like to see this aircraft go on and continue to fly, and likewise we are happy to take it and use it for the future.” 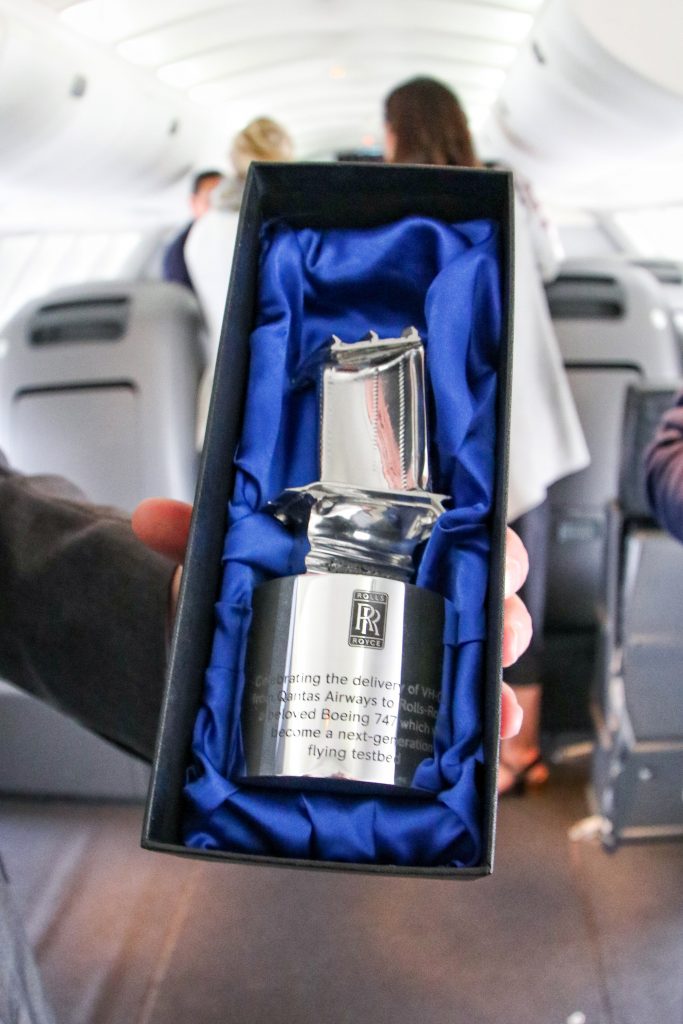 The aircraft will fly as-is in its current configuration but will be instrumented towards the end of this year so AeroTec can validate some of the models to support the modification. Modifications will take place in Moses Lake over the course of about 2 years.

The Future for Qantas in Its 100th Year

With OJU gone, only six Boeing 747-400s remain in Qantas’ fleet, to be retired over the next year. With Qantas entering its centenary, the former fleet is to be replaced by its Airbus A380 fleet and Boeing 787-9 Dreamliner fleet. The day before the OJU’s final flight, one of Qantas’ yet-to-be delivered Dreamliners emerged from the paint shop in a special livery featuring Qantas’ former logos to commemorate the centenary. 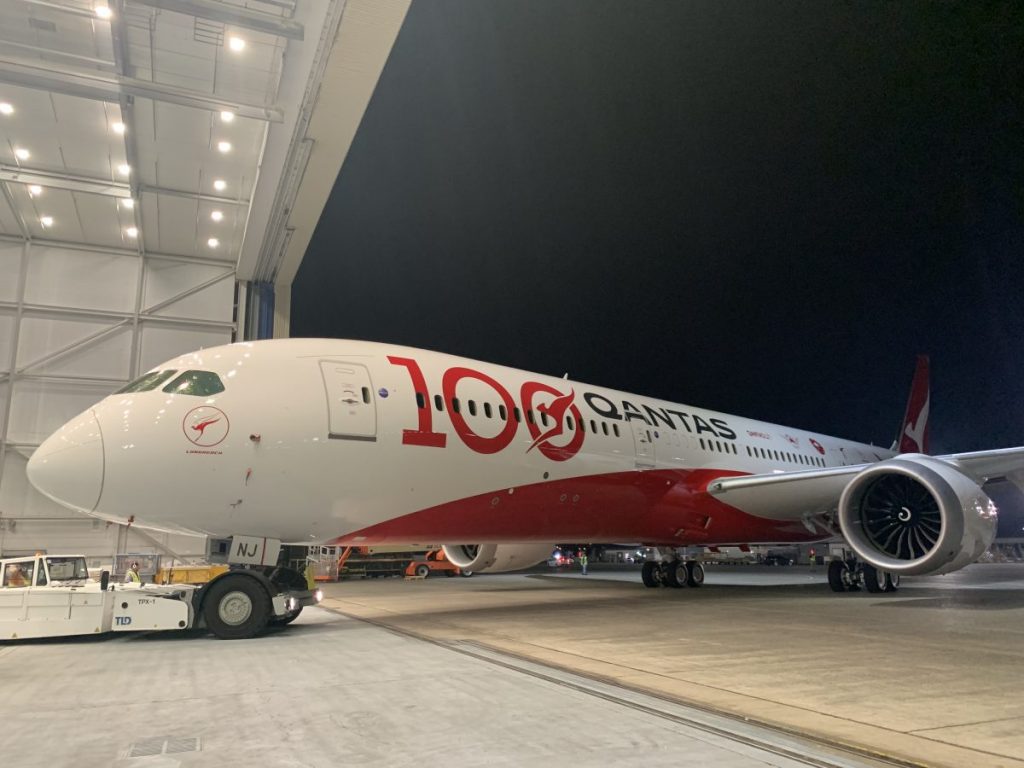 The Dreamliner is set to guide the future for Qantas, with the first special research flight departing this week flying nonstop from New York to Sydney to prepare for Project Sunrise. Currently flying Qantas’ longest route between Perth and London, the Dreamliner is also in the running to operate the proposed nonstop flights between Sydney and New York and London.

Qantas plans to completely retire the last of its 747 fleet, all of which powered by General Electric engines powered, by the end of 2020 and most of the 747’s routes are already being operated by the Boeing 787-9 Dreamliner. The last Qantas Boeing 747 passenger flight between Australia and the United States is set for December when the Sydney-San Francisco route will be upgraded to the Dreamliner.

“The Boeing 747 has been an integral and much-loved member of the Qantas fleet for many years,” said Chris Snook, Executive Manager of Engineering for Qantas. “We’ve operated almost every variant and while it is sad to see them go. OJU has proudly worn the flying kangaroo for more than 20 years and we’re delighted that she has a long life ahead of her to help test and support the development of the next generation of aircraft engines.”

The Dreamliners aim to provide a new level of passenger comfort to Qantas passengers, who stand to benefit from the aircraft’s unseen amenities including lower cabin altitudes and increased cabin humidity. Additionally, Qantas also features some of its newest products on the Dreamliner, including business class seats that feature direct-aisle access and new premium economy seats.

Though, while Qantas moves into the future with the Dreamliners, at least one of its former workhorses will be gracing the skies with its presence and working towards the betterment of the industry while doing so as, without testbed aircraft, aircraft like the Dreamliner wouldn’t be possible.