Since 2006, American Airlines has partnered with the Gary Sinise Foundation to bring families that have lost members in combat together  Originally, the company operated charter flights to its Dallas/Fort Worth base where children were transported to the “North Pole,” also known as hangar specially decorated for the holidays.

Just a few years ago, though, American amended the flight plans and changed the destination for these flights. Instead of the North Pole, the airline began flying families to Orlando for some holiday fun at the Walt Disney World Resort, all donated by the Gary Sinise Foundation. 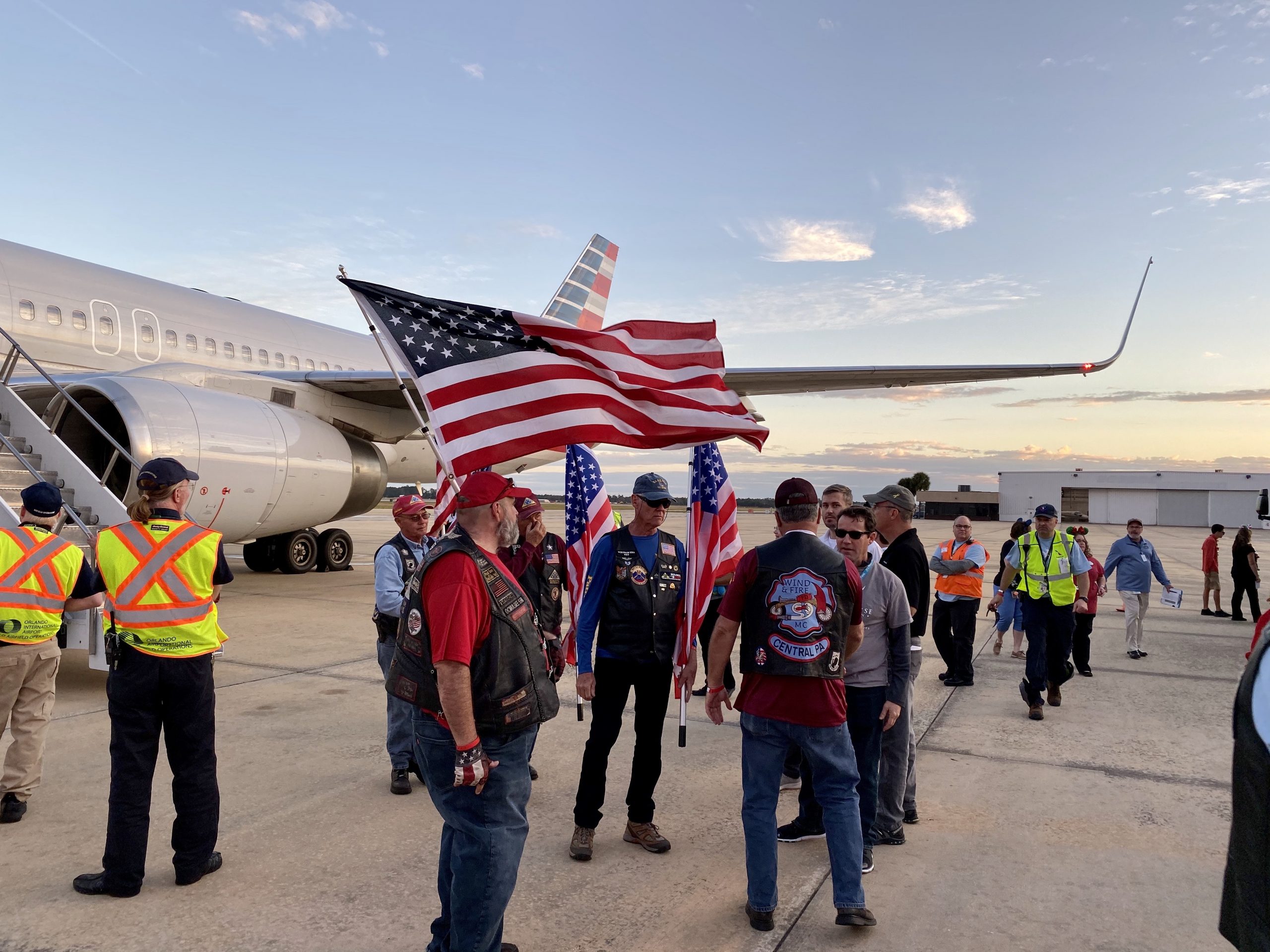 Snowball Express flights are intended to provide a reprieve for and give back to Gold Star families. (Photo: AirlineGeeks | Ryan Ewing)

Gary Sinise, the founder and chairman of the foundation, has been a long-time proponent for giving back to Gold Star families,  immediate family members of fallen service members. Sinise is best known for his role as Lieutenant Dan in the 1994 movie Forrest Gump where he played a battle-hardened Vietnam War veteran who lost both legs and struggled with alcoholism, which prompted him to begin the foundation.

A Nationwide Airlift to the Happiest Place on Earth

While American Airlines operates thousands of flights per day all across the world, these charter flights are different and the cargo is precious.  The work that Sinise, along with American Airlines, does each year is executed with military-like precision with the sole intention of bringing these families and their children some joy over the holidays, especially after experiencing some of the darkest times imaginable.

For Snowball Express 2019, American flew 13 aircraft ranging from Airbus A319s to a Boeing 777-200 from the furthest corners of the country to Orlando. These chartered aircraft made 22 stops in different cities from Seattle to San Antonio and almost everywhere in between. The goal with these flights is to carry as many people as possible to Orlando in one day and according to the airline, over 1,700 family members of fallen service members were transported to Orlando.

Of course, an airlift of this complexity requires plenty of hands-on assistance. To do this, American Airlines flight attendants and pilots on these charter flights were all volunteering their time for the cause. Some ramp agents and other airport staff members volunteered their time as well.

“The holiday season will be difficult for many of these families, particularly those who have recently lost a parent and spouse. [The Gary Sinise Foundation Snowball Express] allows them the opportunity to bond and make new memories with the only ones who truly understand their loss – each other,” a press release from the company stated.

Onboard a Charter from Phoenix to Orlando via Houston

American exclusively invited AirlineGeeks to go behind-the-scenes onboard one of these charters. While American operates multiple nonstop services between Orlando and Phoenix, including on its new Airbus A321neo, our multi-leg journey to Disney World would depart Phoenix at 8:30 a.m., pick up additional families in Houston, and arrive in Orlando at 3:50 p.m.

The flight was operated by an Airbus A319 formerly of US Airways and had flight attendants from several different crew bases working the flight, including one from Miami and another based in Dallas/Fort Worth. All of them deadheaded to Phoenix just to volunteer on this special flight.

For the special flights, the standard-issue flight attendant uniforms were left at home in favor of festive holiday sweaters and Santa Claus hats. It wasn’t all fun and games, however, as the flight attendants still ensured the safety of the aircraft and performed drink and snack services during the flight. 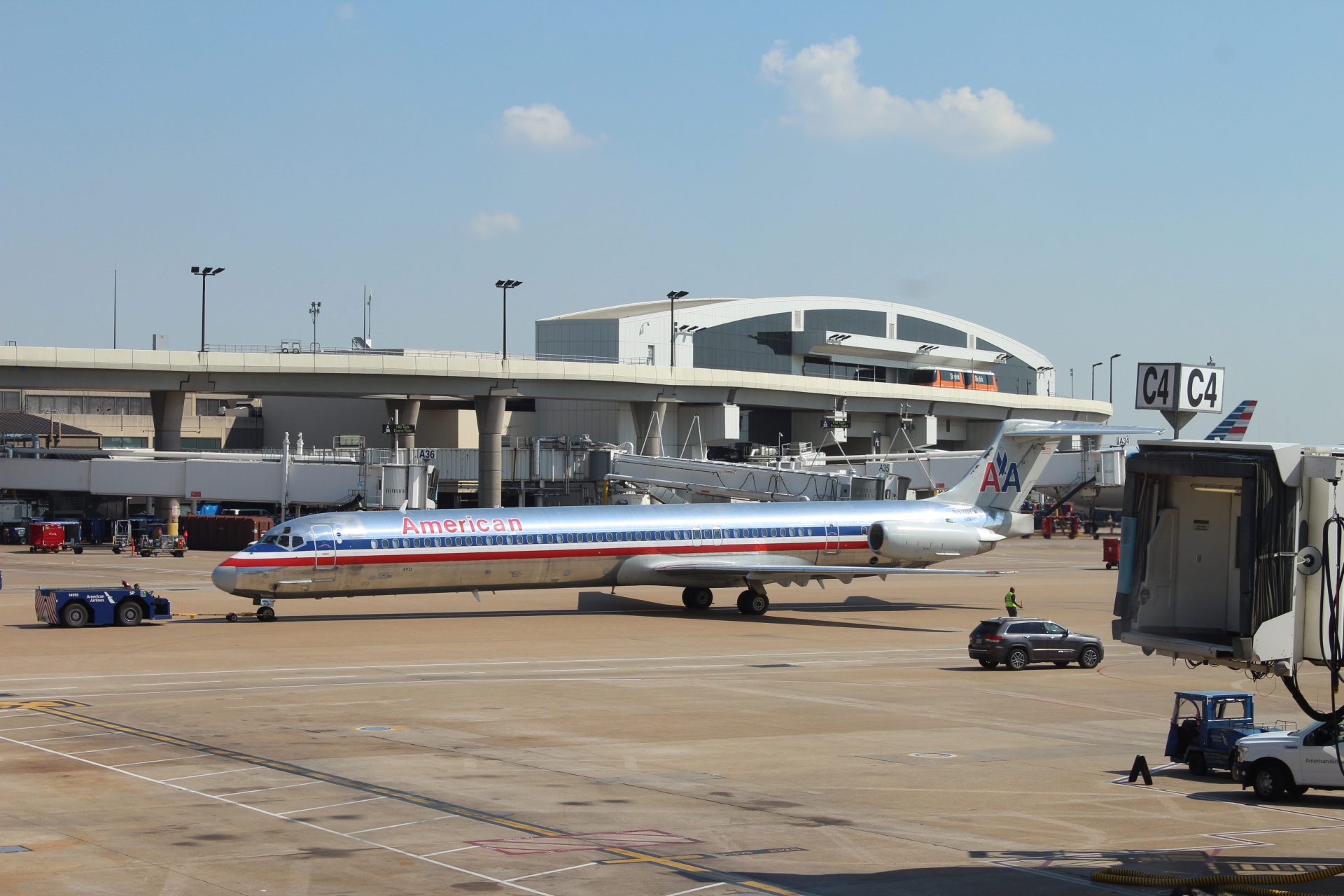 The mood at the gate and onboard the flight was different from a regularly scheduled commercial flight. A gate party was held where Santa Claus and some other characters were out in full-stride mingling with the families. Even though the flight was a charter, it still boarded promptly at 8:00 a.m. local time.

In the military, there is no man left behind, and that was the case on this flight. One family was still checking in when the departure time came around and the crew held the flight to accommodate them.

As the A319 rocketed into the Arizona sky, the party was just getting started. The crew came around with some snacks and even enlisted some of the guests to help push the galley carts. And, of course, hot chocolate is always a must on a flight like this. 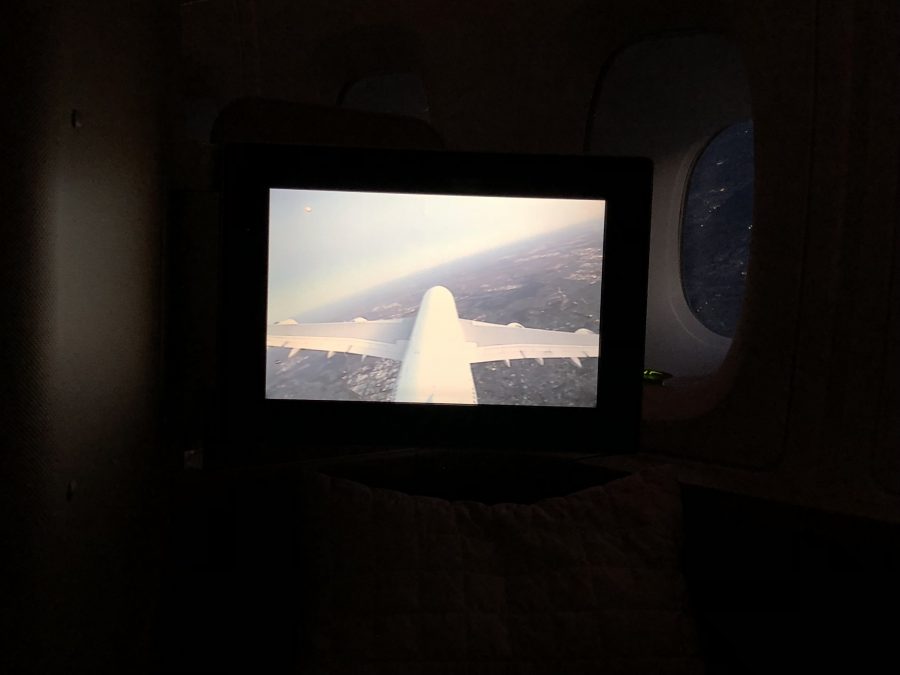 The flight crews are all American Airlines volunteers who donated their time to operate the flights. (Photo: AirlineGeeks | Ryan Ewing)

While the holiday fun raged on, our first stop in Houston was quickly approaching to pick up more families. While Houston is an out-station for American, there was no shortage of fanfare. The flight was greeted with cheers and a small gate celebration before pushing back 30 minutes later for Orlando. Houston’s airport fire department adorned the aircraft with a water cannon salute as it taxied out for its final destination. 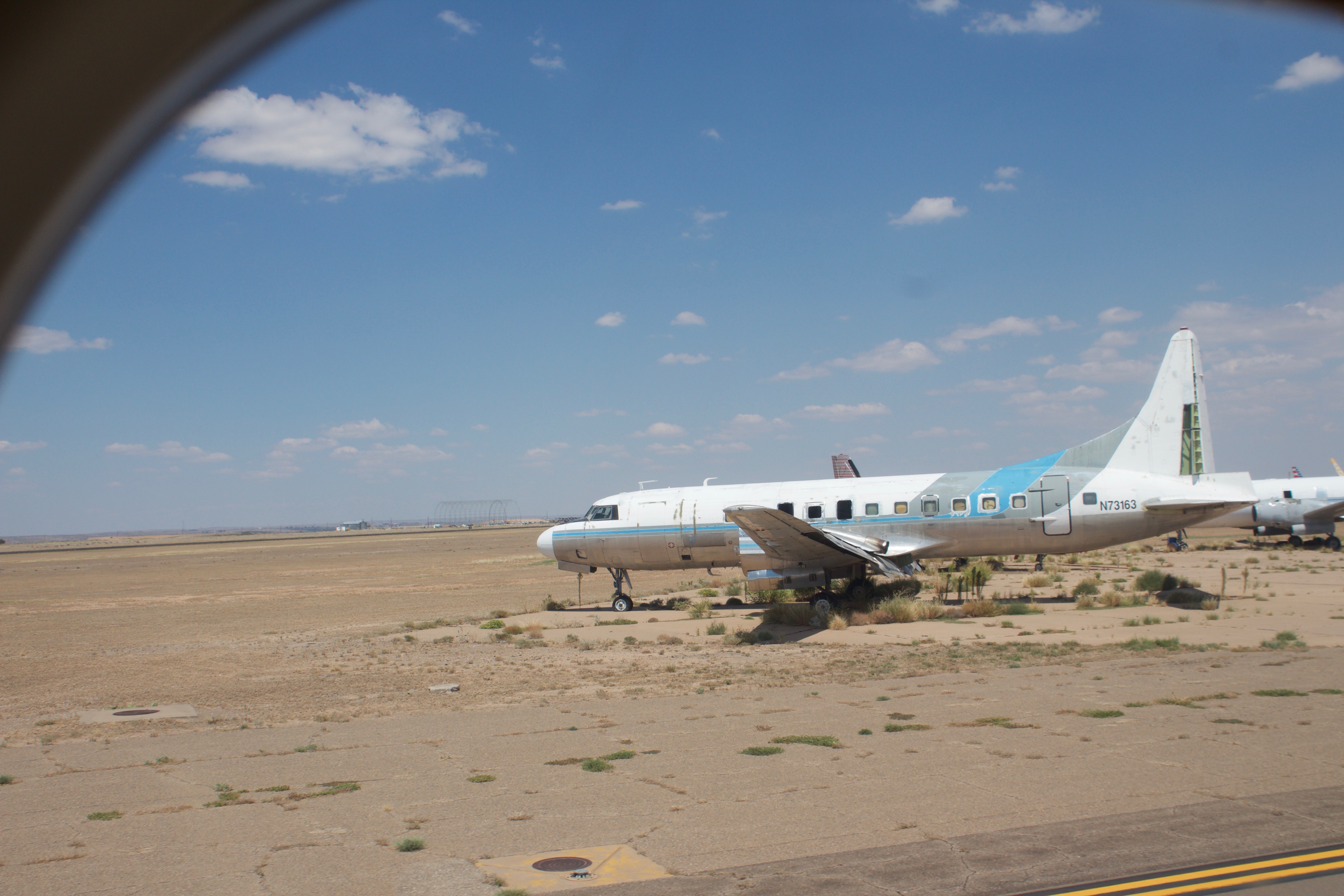 The arrival and departure of these flights was a community affair with many coming out and showing support for the families. (Photo: AirlineGeeks | Ryan Ewing)

Onboard, the crowd grew and so did the smiles and festivities. Once again, the volunteer cabin crew came around with snacks, hot chocolate and sang Christmas carols to liven up the mood a bit.

The party continued all the way to Orlando where the flight arrived around 3:50 p.m. local time. Instead of going to the typical gate, these charter flights went to the Signature Flight Support FBO where private aircraft are typically serviced. Disney’s Magical Express buses met the flight and whisked the families over to the park, which is about 20 miles from the airport itself, almost as quickly as they arrived.

While these Gold Star families were getting ready for a few days of fun, volunteers back at the airport worked to unload each of the 13 charter aircraft, moving bags over to Disney World on trailers.

A Symbol of Goodwill in the Airline Industry

From the flights themselves to the preparations on the ground, the scale of the operation is nothing short of complex. American Airlines and Gary Sinise Foundation volunteers work tirelessly over this four day period to ensure these families have no worries during their stay. It was evident that all the volunteers were dedicated, ready and willing to assist whenever possible. 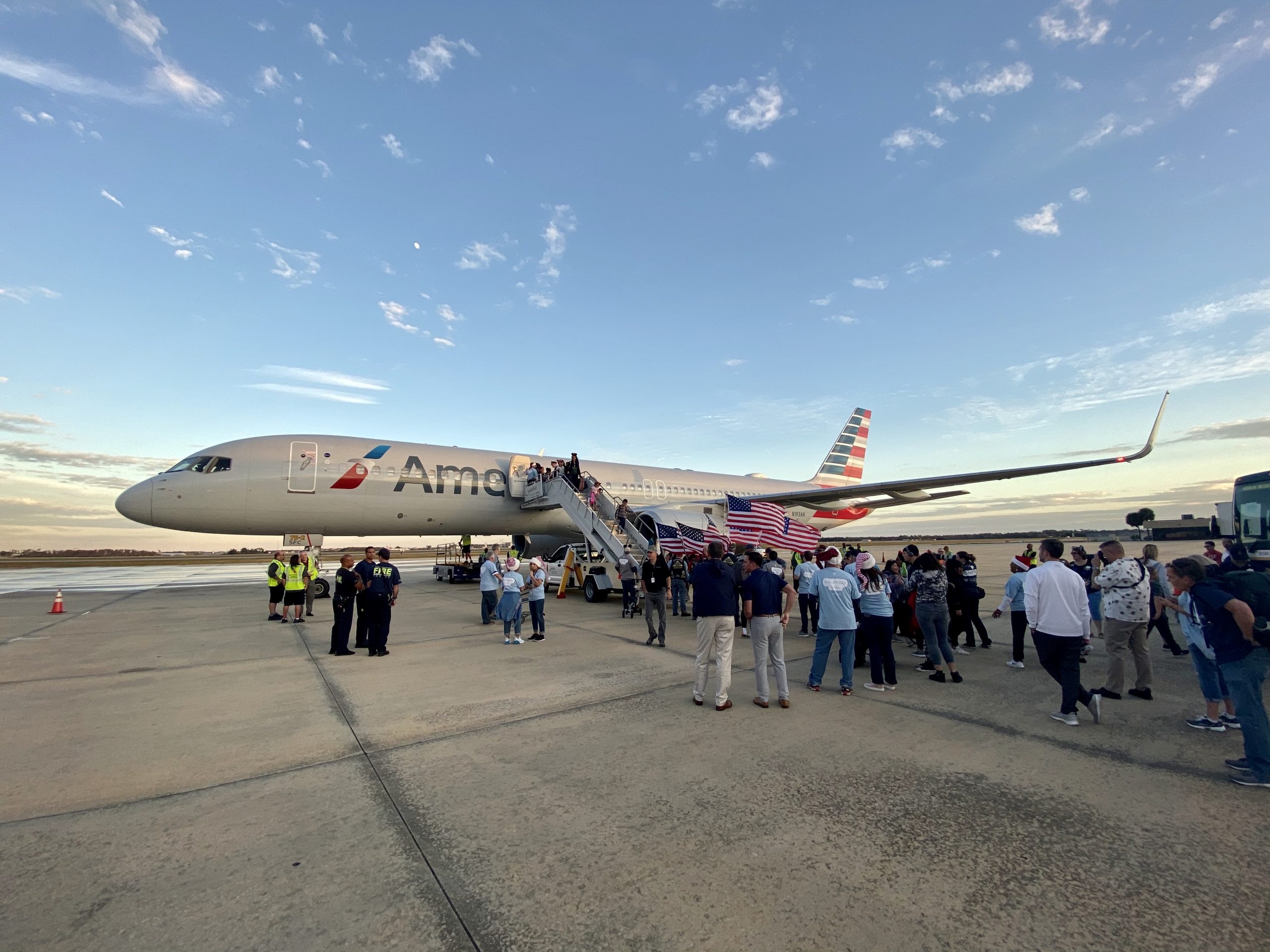 Aircraft ranging from Airbus A319s to a Boeing 777-200 participated in the airlift. (Photo: AirlineGeeks | Ryan Ewing)

The airline industry is cyclical. There are plenty of moving parts, pitfalls and sudden fluctuations that often make the industry tumultuous. Years of bankruptcies and ongoing lay-offs haven’t exactly painted the airline industry in a positive light, at least from the public relations side of things.

Despite this, it is easy to overlook the good airlines can do in the world with their massive fleets and armies of employees. With its annual Snowball Express airlift, American Airlines is no stranger to supporting goodwill efforts.

It certainly isn’t uncommon to hear companies and, of course, airlines discuss their goodwill efforts. However, events like these where a company like American is providing resources, such as aircraft and crew, certainly stick out.

Since its inception, Snowball Express flights to Orlando have transported more than 2,970 families for some well-deserved relaxation at Disney World, according to one stat by the airline.

Follow Ryan
Ryan Ewing
Ryan founded AirlineGeeks.com back in February 2013 and has amassed considerable experience in the aviation sector. His work has been featured in several publications and news outlets, including CNN, WJLA, CNET, and Business Insider. During his time in the industry, he's worked in roles pertaining to airport operations and customer service while holding a B.S. in Air Transportation Management from Arizona State University along with pursuing a concurrent MBA and law program. Ryan has experience in several facets of the industry from behind the yoke of a Cessna 172 to interviewing airline industry executives. In addition to supporting AirlineGeeks, Ryan works full-time in the aviation industry.
Follow Ryan
Latest posts by Ryan Ewing (see all)
AAaircraftairlinesFeaturedplanesSnowball Express
Related Stories
[ Related Stories ]November 17, 2021 8:00 am ET
By João Machado