Amid a global crisis that has practically reduced global travel to a skeleton of what it once was, a small, single-runway airpark smack-dab in the middle of the Arizona desert is an unlikely portrait of productivity. Pinal Airpark, situated along the Interstate 10 corridor between Phoenix and Tucson, in Marana, Ariz. has only one runway measuring at 6,849 feet, yet it is home to airline fleets of all aircraft types, both large and small.

The cloudless blue skies join the mountainous landscape to make for what many locals consider another Arizona day. At Pinal Airpark, there’s an eerie sound interrupting the typical calmness of the desert: jet engines clicking in the wind.

That is the anthem of aircraft with an uncertain fate, many of which brought to the desert by airlines around the world to ride out the COVID-19 pandemic as travel demand tumbles by the day. 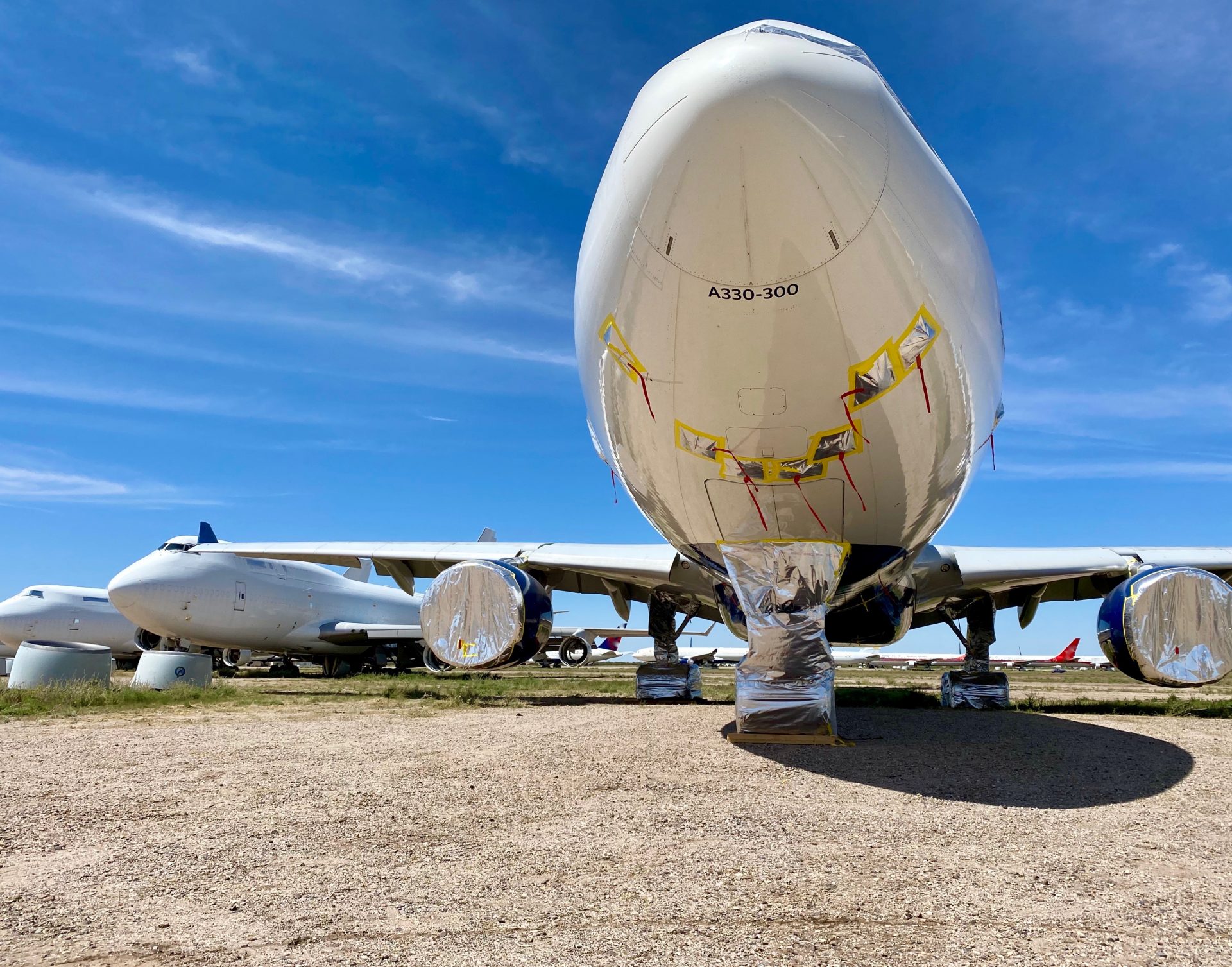 It’s high-noon in the Sonoran Desert on a toasty Monday and a flight is about to land at the small airpark. Contrary to what one would expect to see land on a shortened runway, this isn’t a Cessna 172 training flight or F-18 touch-and-go.

Instead, it’s a Boeing 767-300ER arriving from Canada. Minus the two pilots, the jet is completely empty inside.

On the ground, crews from the airpark’s largest tenant, Ascent Aviation Services, are preparing to meet the flight, complete with an aircraft tug and attachable stairs. Since the airpark is uncontrolled, the pilots call out their position on a frequency, something virtually unheard of in the world of traffic management programs and overcrowded airports.

Like a desert mirage, the 767 appears on final approach, draped by the scenic landscape. The 24-year-old aircraft then uneventfully lands on Runway 12. This would likely be the jet’s last landing for an unknown period time as uncertainty looms over the aviation sector.

The jet taxis under its own power to a parking stand, where it’s chocked. Often at Pinal Airpark, some aircraft are simply too large to exit the runway on the airfield’s smaller taxiways by themselves so a tug is called in. However, this jet was an exception.

Mechanics met the aircraft, attaching it to a tug and waiting for the pilots to finish up in the flight deck. The ground crew is working at a slightly hurried pace as there was another arrival right behind this one.

This 767 wasn’t crunched for time to be turned-around at a hub airport to another destination on its flying line. Instead, it was being hastily turned to go be parked on a piece of land in the desert. 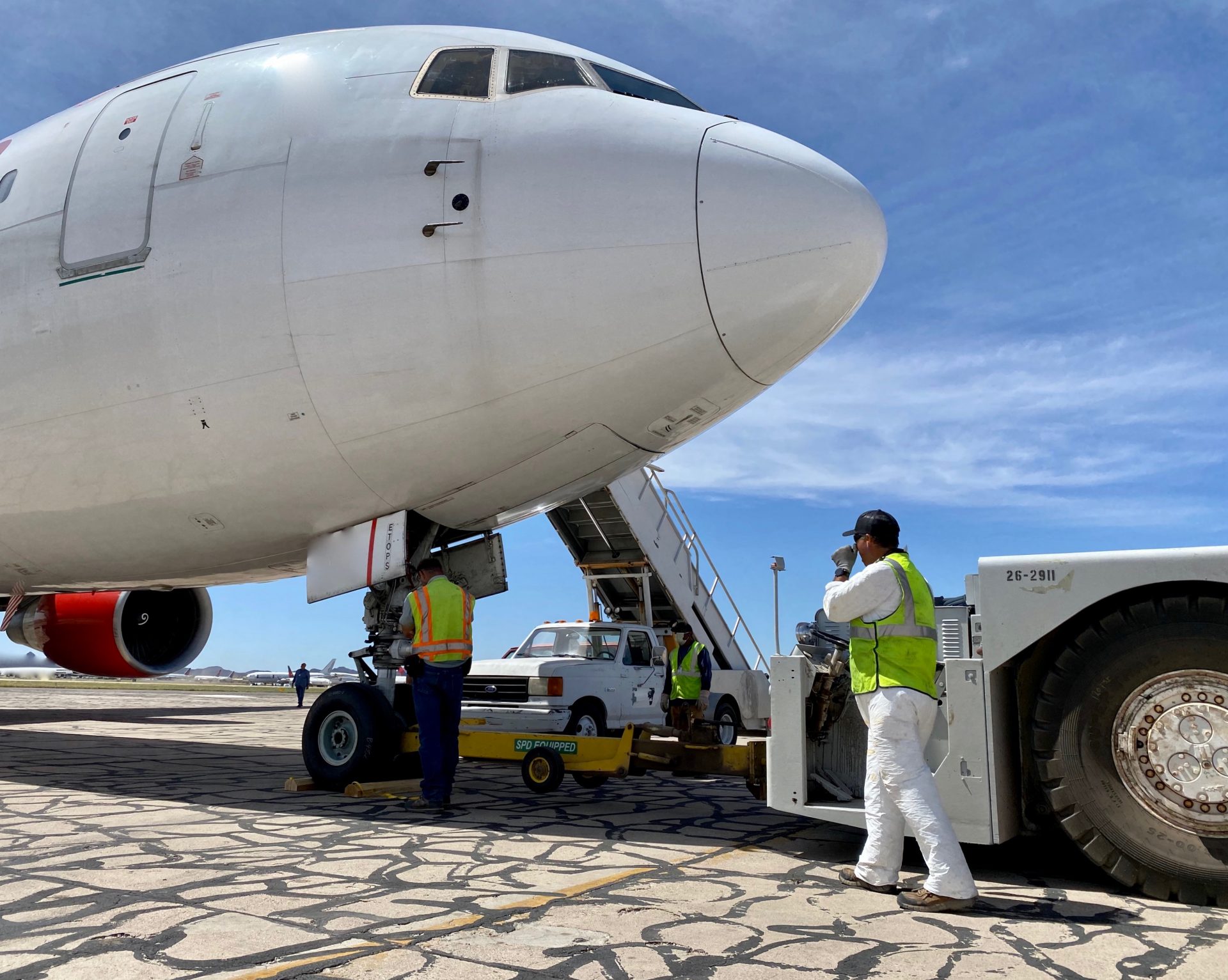 Two pilots stepped off the airliner, one of which was dawning a medical mask. It was evident that the emotions were raw for this flight crew. After placing their bags into a van, they walked around the 767, snapping pictures and paying their farewells to the jet they just helmed.

This is an all-too-common sight at the small Arizona airpark.

This 767 may be older in comparison to some newer aircraft on the market today, though it isn’t being retired. Instead, its owner has opted to store it as the jet’s services will not be needed as the pandemic continues. 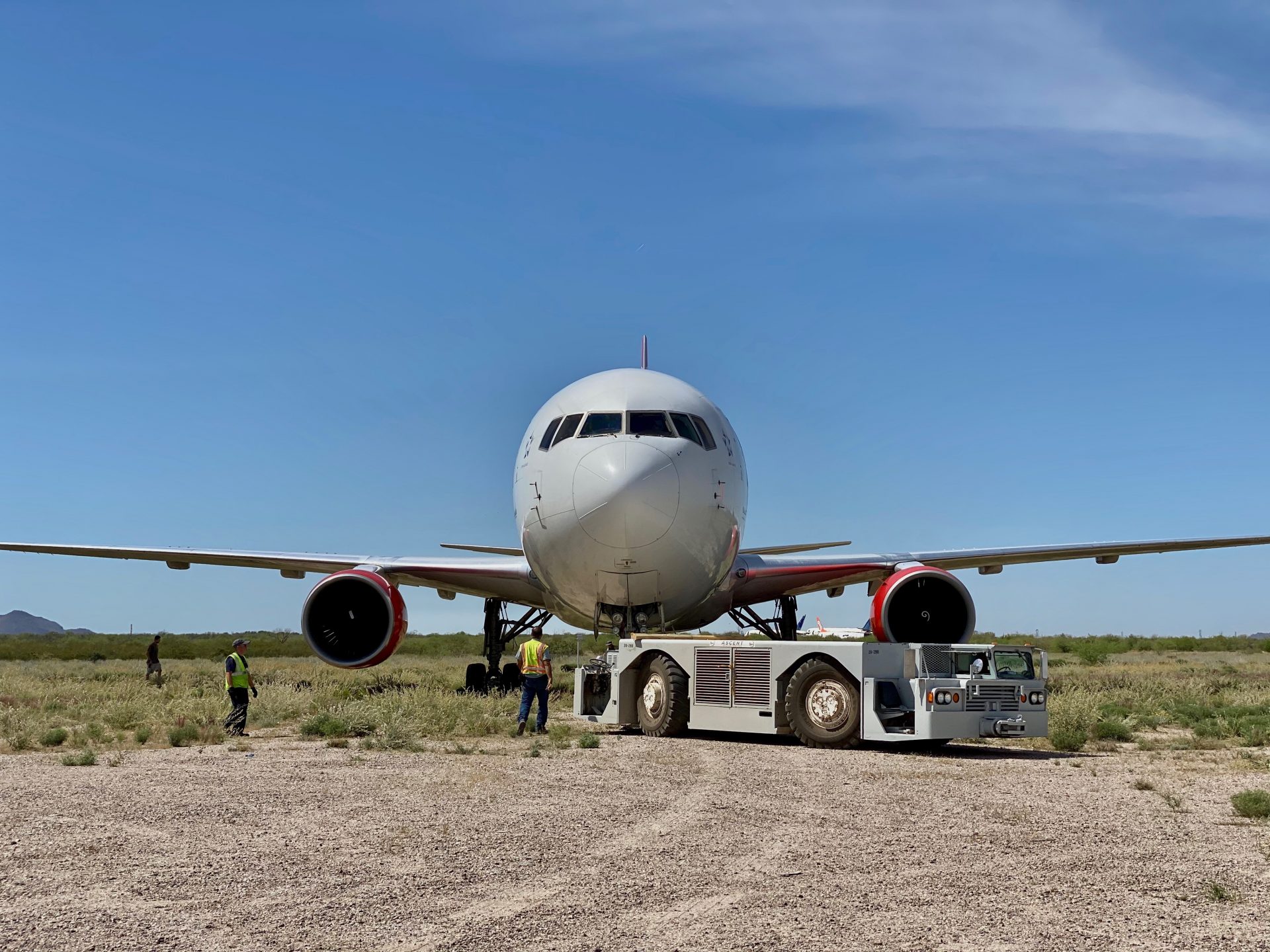 The 767 is pushed into its desert resting place (Photo: AirlineGeeks | Ryan Ewing)

“We are on an up-cycle,” says Scott Butler, Chief Commercial Officer of Ascent Aviation Services, while looking over a seemingly never-ending line of stored jets from his corner office perch. “We don’t want to be a parking lot, we want to make sure that we are bringing aircraft in for storage.”

Indeed, the scale of aircraft arriving into Pinal Airpark is incredible given the airfield’s size. Over the last two months, Ascent has added over 200 aircraft to its storage line-up, Butler notes. 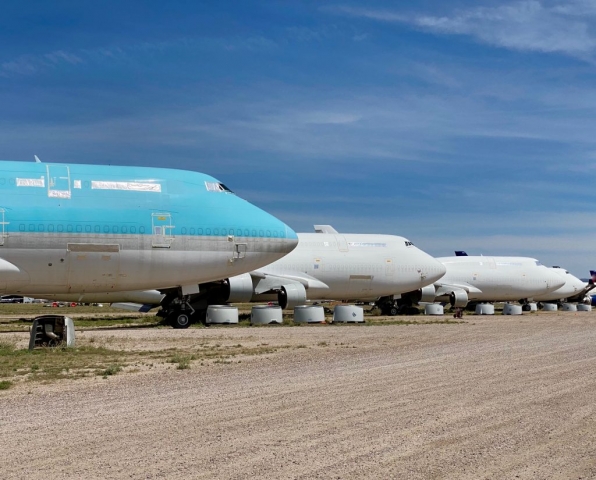 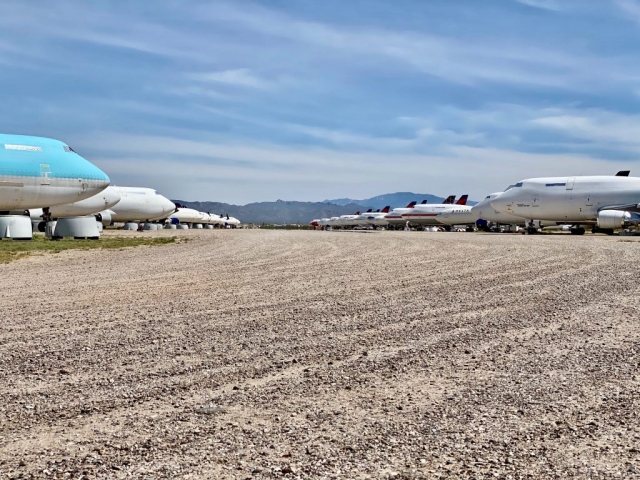 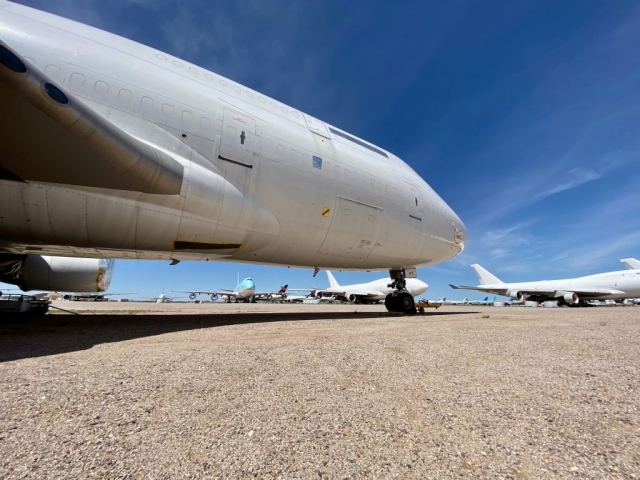 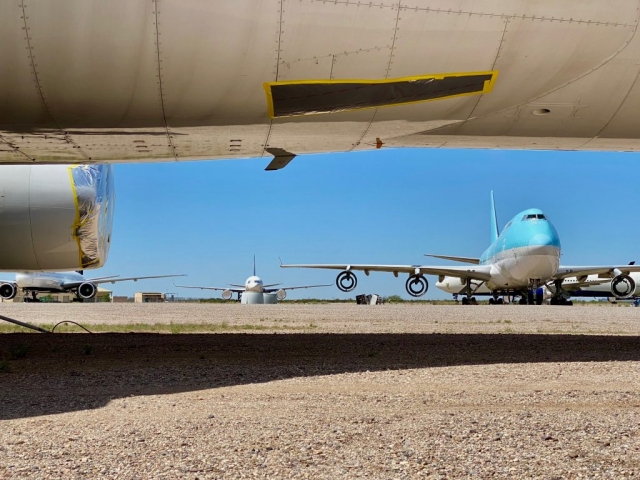 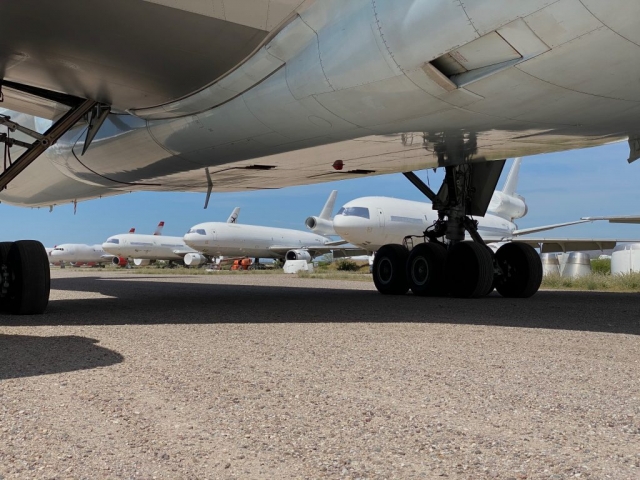 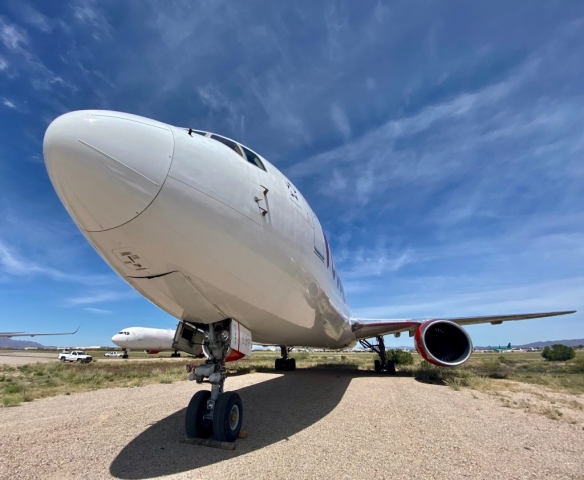 The single-runway airpark is seeing 25 arrivals per week, or five per day on average, and few departures. While that number may seem small in the grander scale, American Airlines is operating only two scheduled daily flights to its station at New York’s LaGuardia Airport right now.

Even though space may not seem too difficult to come by in the expansive desert, Butler says Ascent is expecting 50 percent more stored aircraft at its facilities, roughly 300 total jets in the next few weeks. He expects the company’s Pinal Airpark facility to be out of room by late-April.

“Full is relative…we want to have enough mechanics to work the aircraft,” he adds. 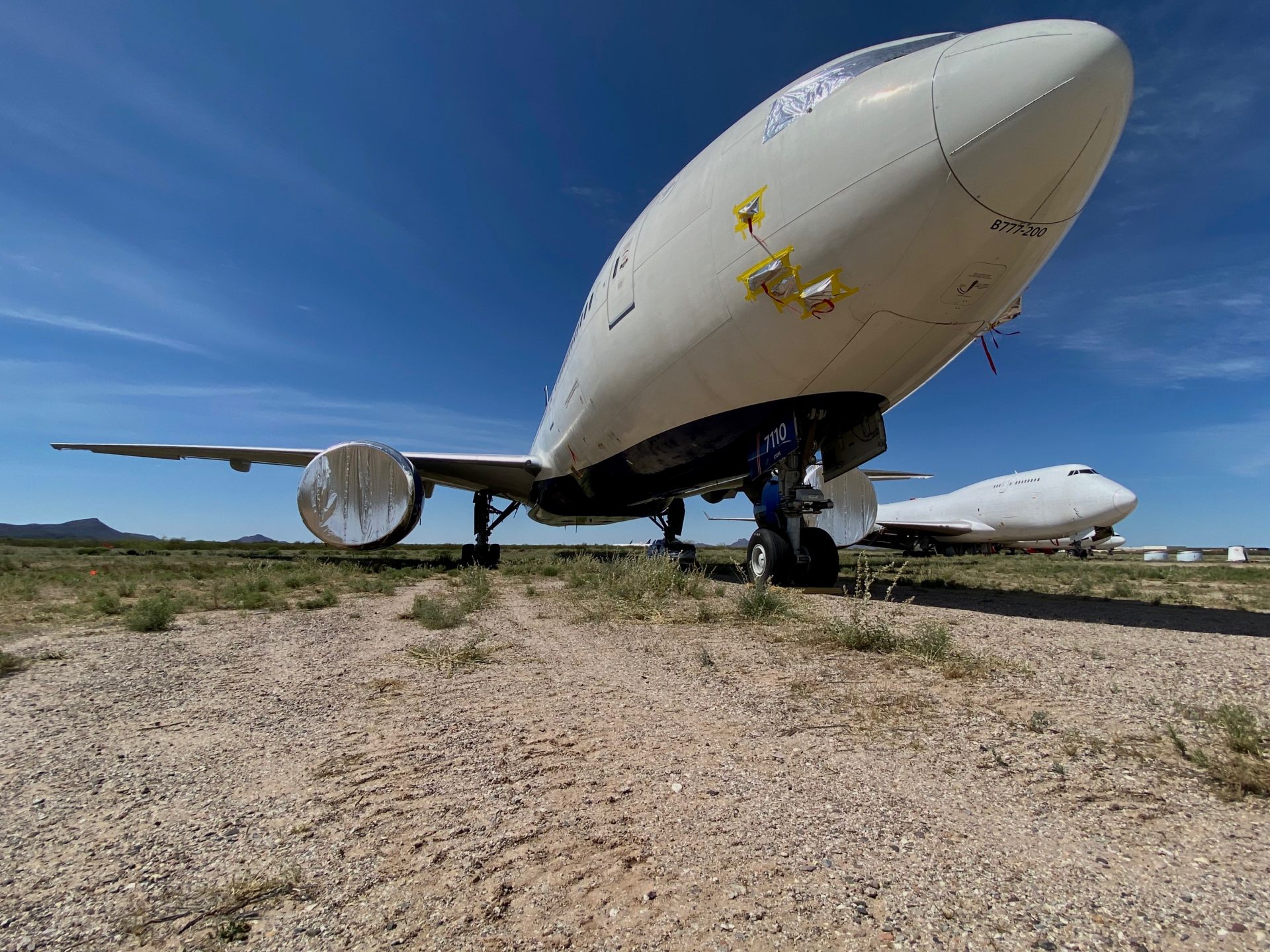 Despite an ailing job market, Ascent is one of the few companies actively onboarding new mechanics and support staff for its surge in demand. Many of these mechanics, according to Butler, come from the airlines that have aircraft stored at Pinal, so they have extensive knowledge of their specific jets.

“We have been hiring very steadily the last few months. We’ve been getting bombarded with resumes,” Butler continued.

Just because an aircraft is sitting in the desert for months-on-end does not mean it is left without attention. Manufacturers and air carriers have specific upkeep requirements for each of their aircraft, down to the specific ship number. Everything from ongoing engine runs to the coverings used to protect wheels and power plants is dictated by the jet’s maintenance manual.

“Once you hit the 30-day mark, you have to make sure engines are operating and preserved,” says Butler. One-month marks a critical decision-point for airlines as they decide how long to keep the aircraft in storage. “…it’s a D-day like decision.” 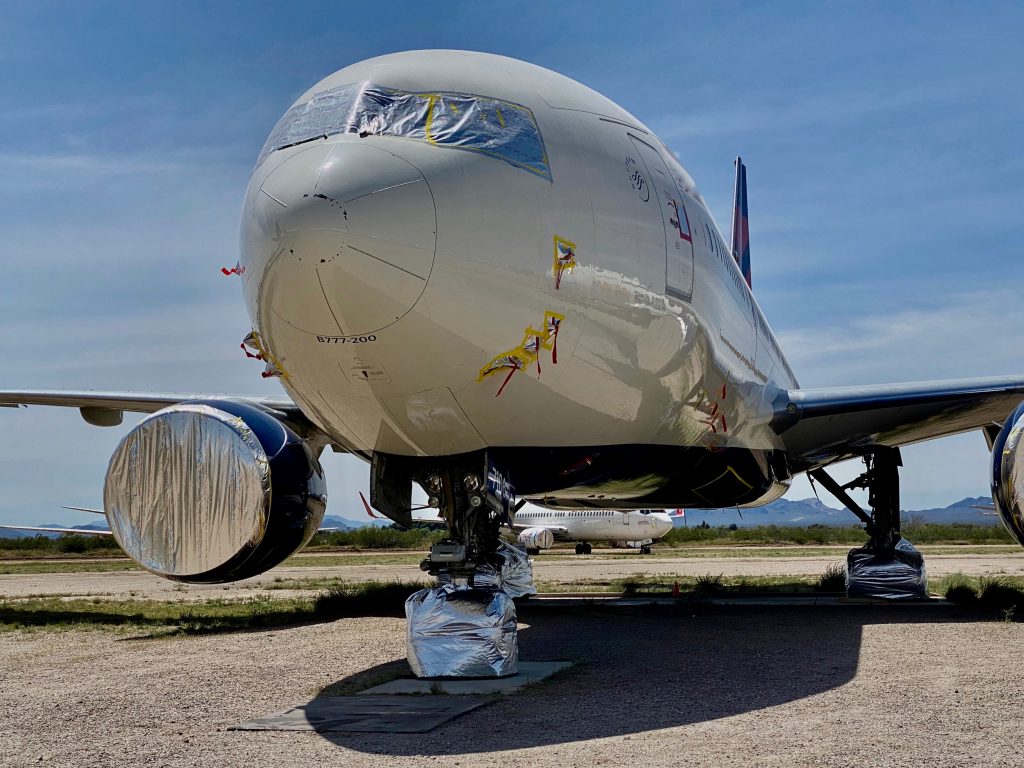 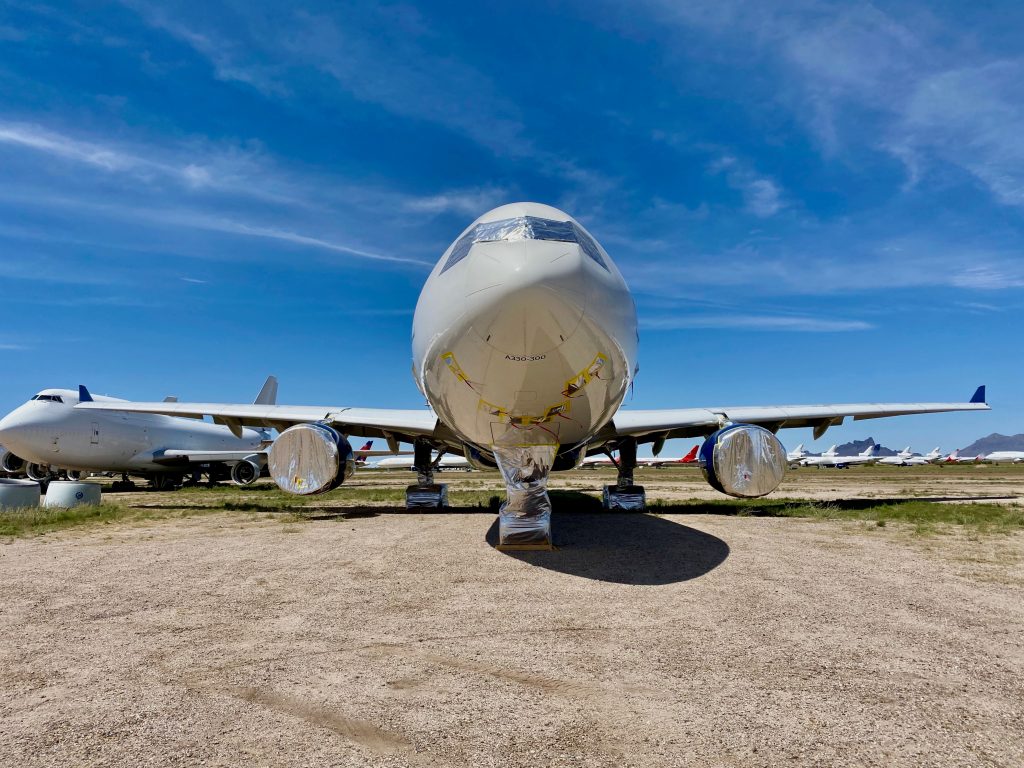 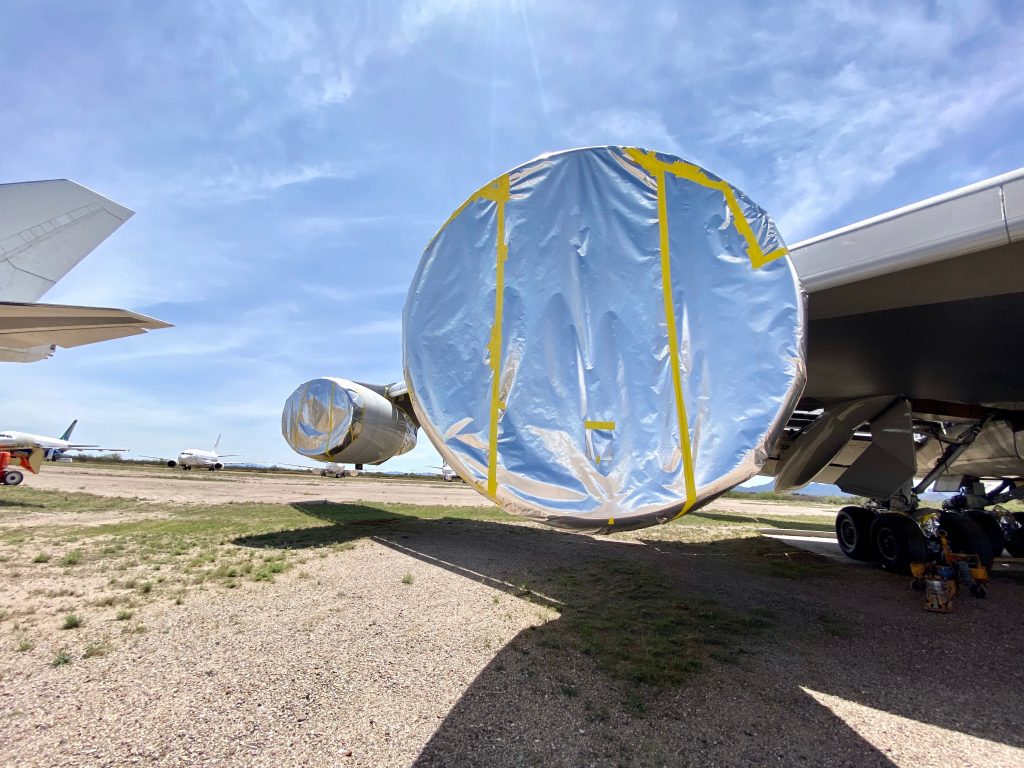 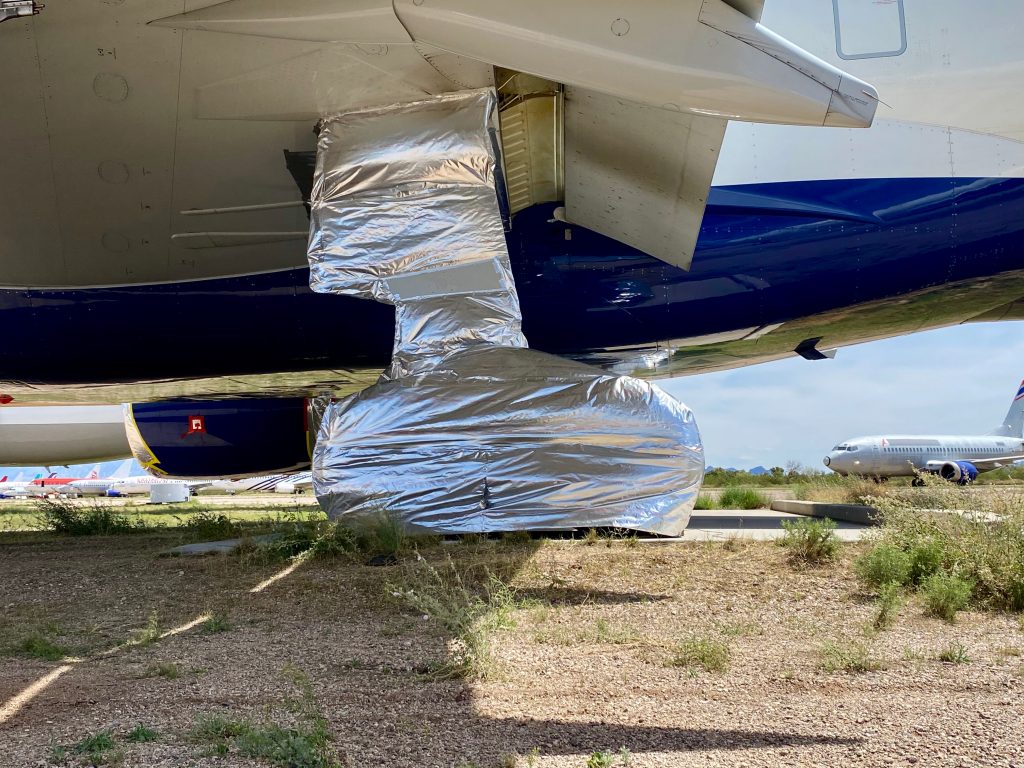 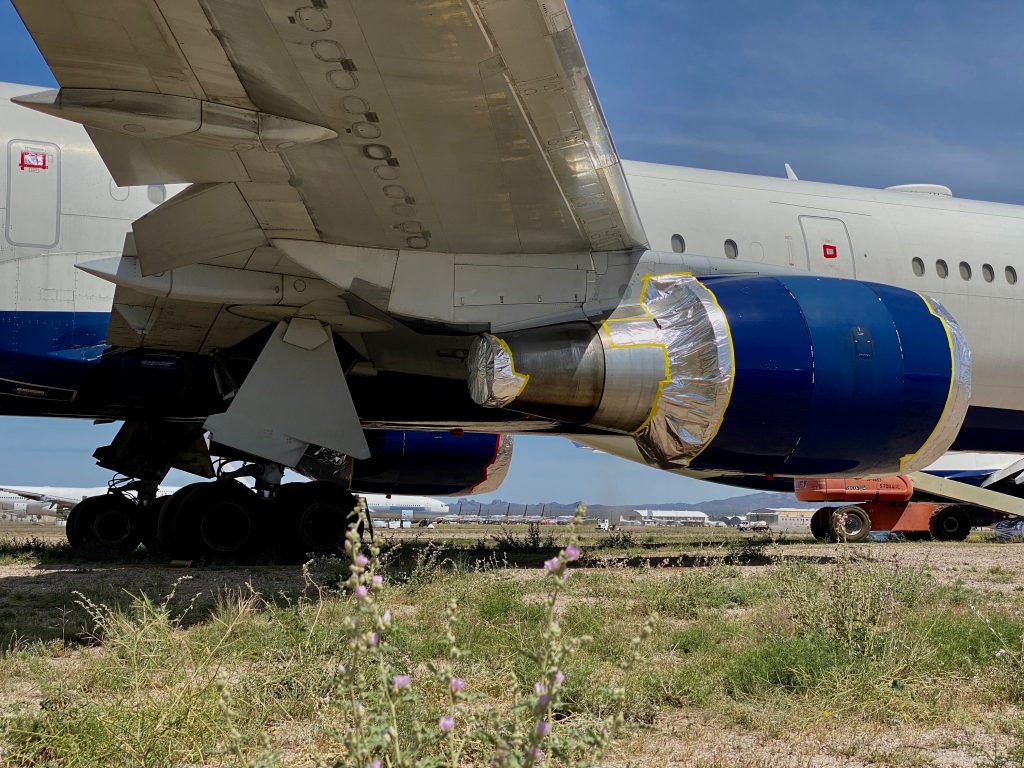 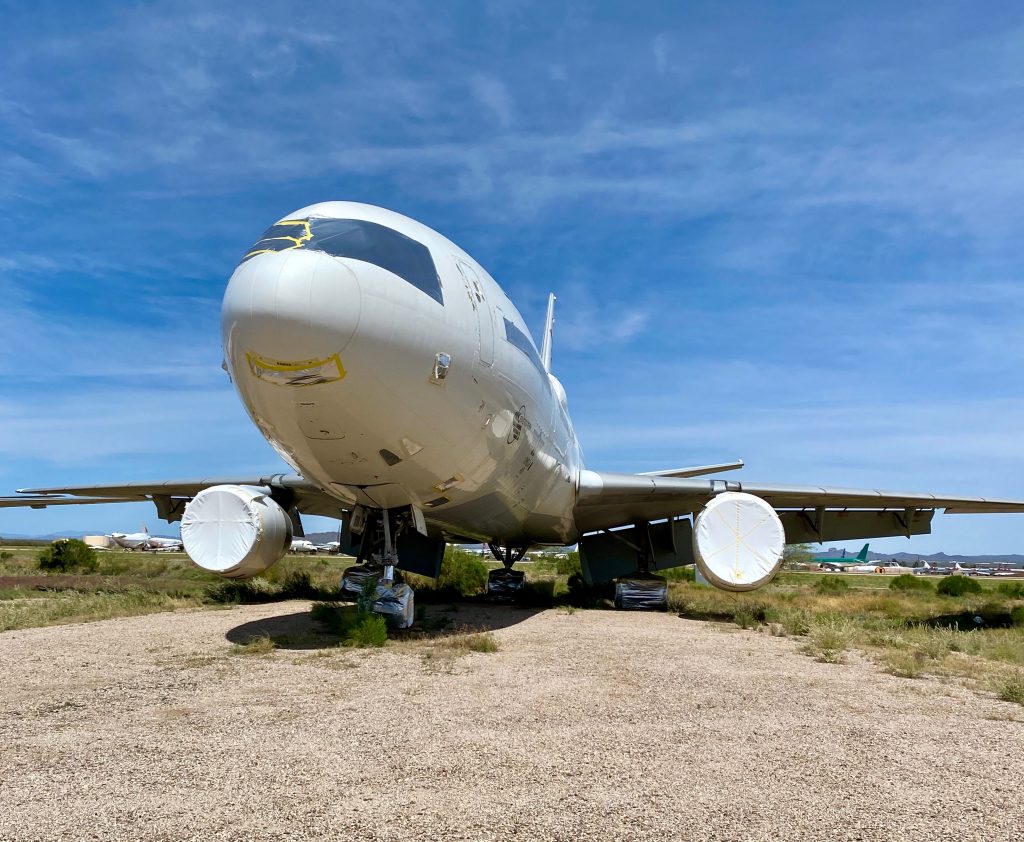 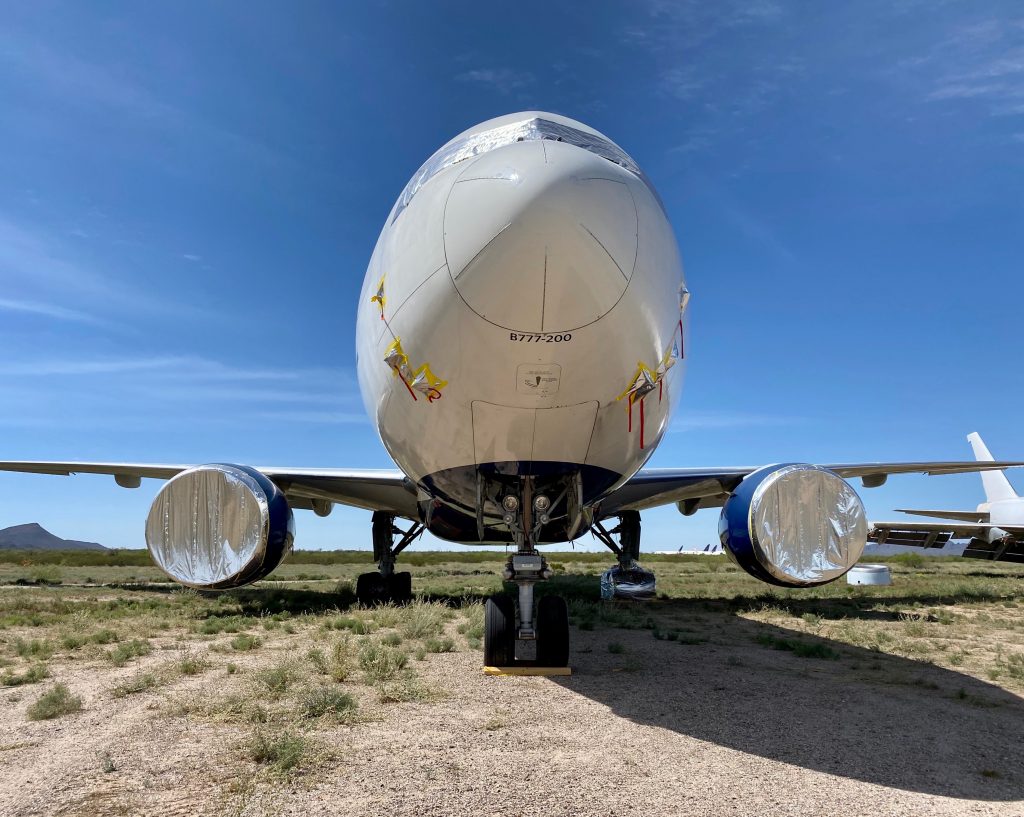 AirlineGeeks’ Hemal Gosai detailed the maintenance requirements for an airliner in storage in a previous article.

Ascent’s approximately 450-strong workforce is kept busy maintaining these aircraft, many of which are relatively new, such as 777-300ERs and A330s. The upkeep requires plenty of continual support to ensure an aircraft can be reactivated and placed back into service in a short time period.

Frequent checks are performed, including some for desert wildlife that may decide to take refuge in the crevices of a 230-ton aircraft. In fact, one aircraft maintenance manual has specific storage guidance for how to deal with bird droppings. 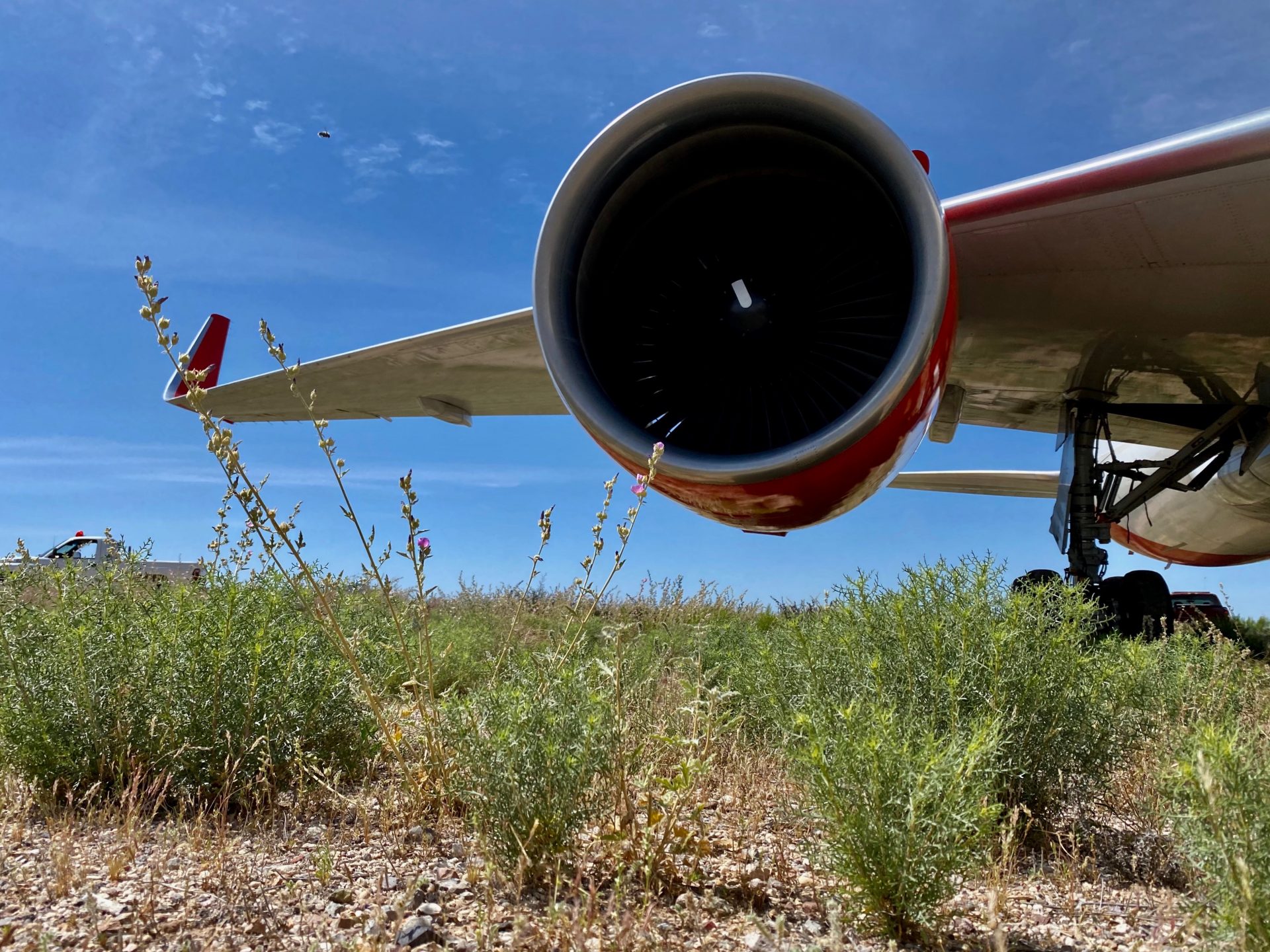 A 767 rests in the Arizona desert (Photo: AirlineGeeks | Ryan Ewing)

Whenever the time comes to get these aircraft flying again, Butler says reactivation for a single jet can be done in about a week. There are countless checklists for this, Butler added. “The reactivation period is going to be interesting, to say the least.”

When this activation period will occur for many of the jets parked at Pinal Airpark is largely unknown right now. But, with that, comes a silver lining. Unlike many other aerospace companies, Ascent has not furloughed any staff members as a result of the COVID-19 pandemic. Furthermore, the influx of jobs is a positive beacon of hope for the airpark’s local economy. 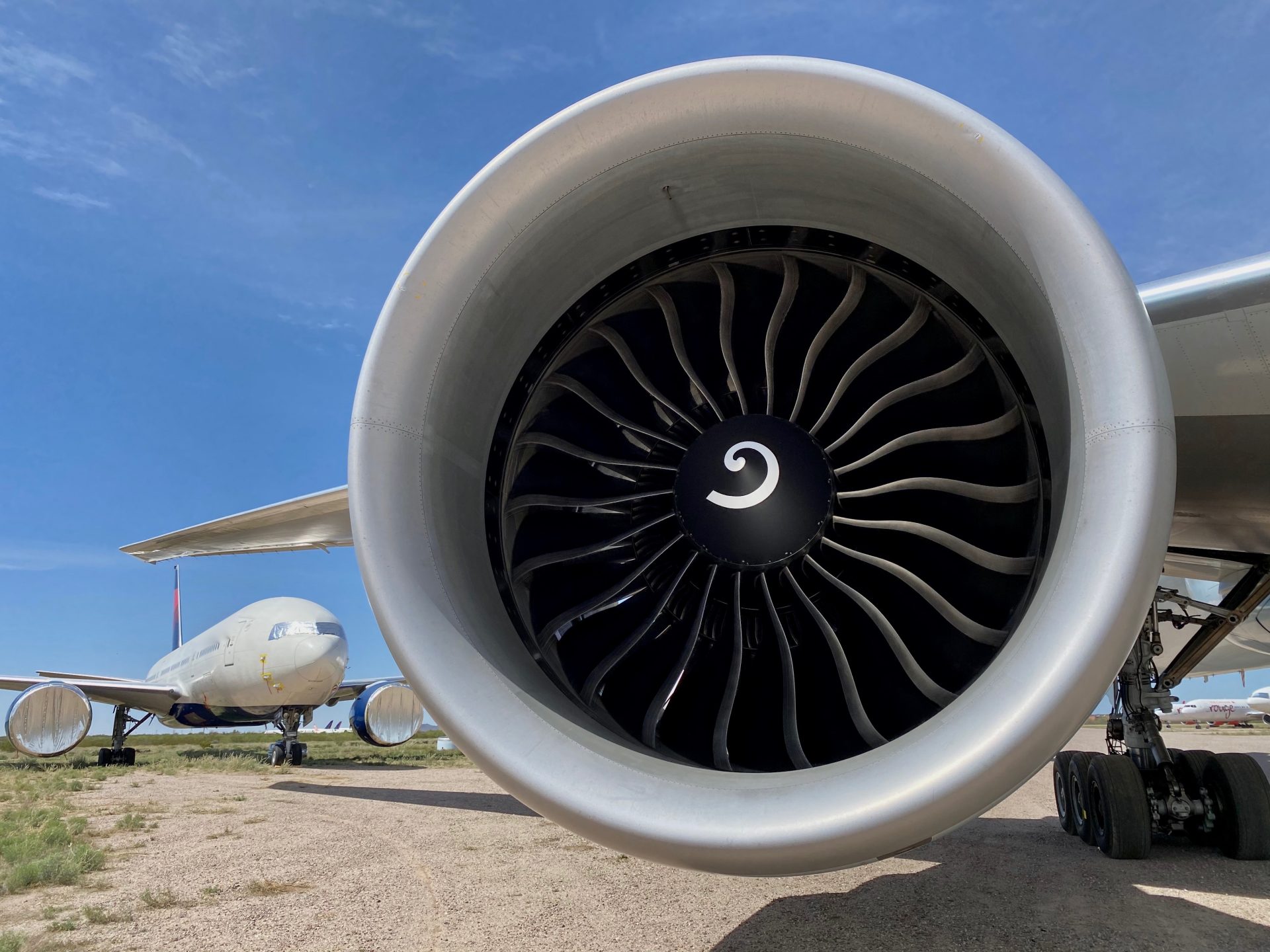 “Even though the demand for new aircraft does create new labor, it does make me sick,” says Jim Petty, the airport economic director for Pinal County, Ariz., which owns the airpark. “You can look at it as a really good thing or a really evil thing.”

Petty acknowledges the grim circumstances but did confirm that the county’s airpark is seeing a higher activity level than normal, an upper-hand for the region’s economy.

“We are very busy and the activity level is very high. We are trying to help our tenants do their business,” Petty added during a telephone interview. 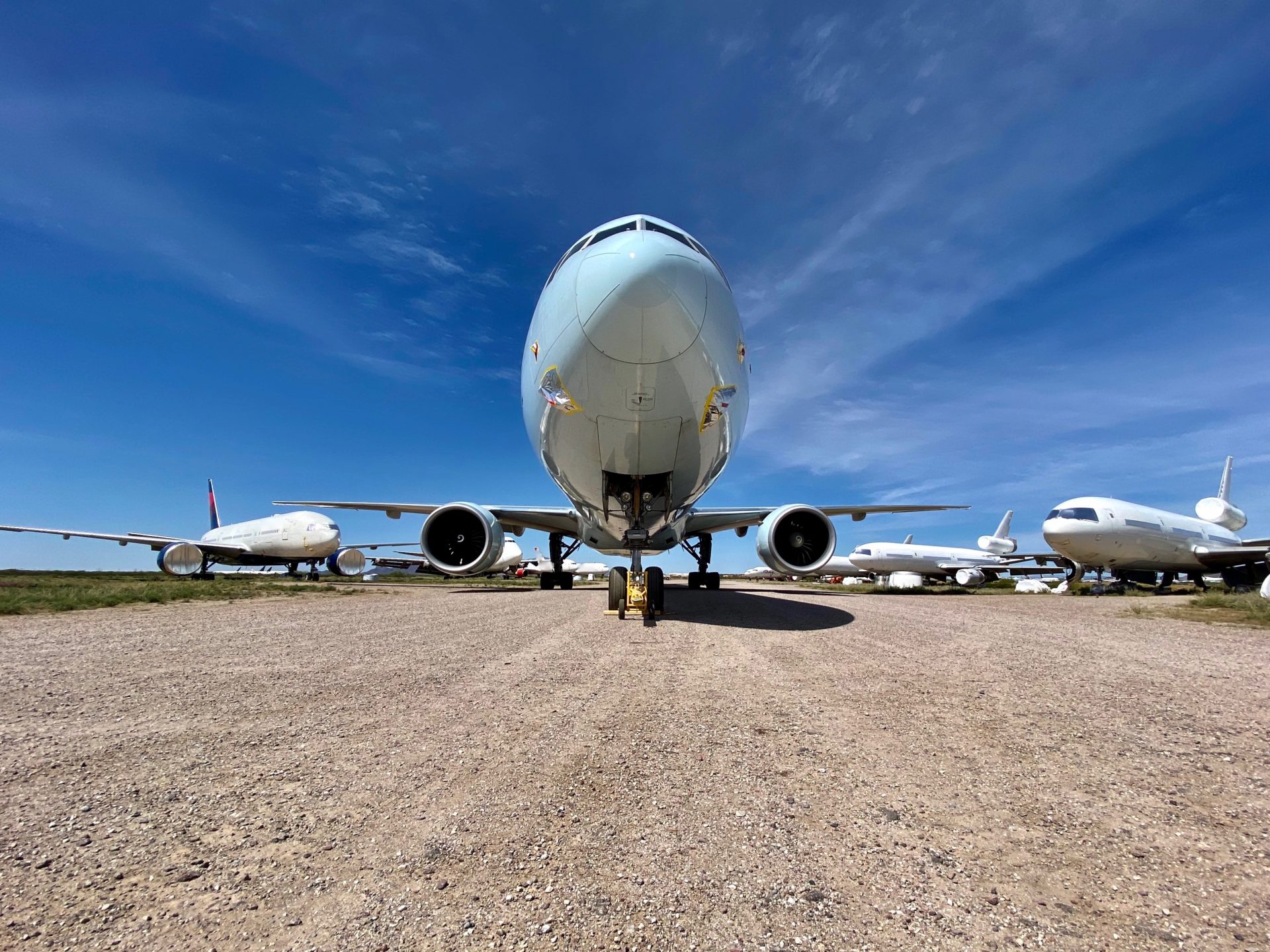 Airlines around the world are placing more aircraft into storage by the day as the COVID-19 pandemic ravages the aviation sector. On Wednesday, Chicago-based United Airlines announced a 90 percent network reduction for the month of May.

According to the International Air Transport Association, airlines around the globe have announced plans to ground over 1,000 aircraft worldwide. These sitting birds need to nest somewhere, and that’s where Pinal Airpark and other similar storage facilities serve a critical purpose.

Despite the bleak circumstances, small airports such as Pinal Airpark are supporting the industry’s global infrastructure and footprint until it is ready to spread its wings again.

“We are trying to help the industry however we can as much as we can,” Petty concluded.

Follow Ryan
Ryan Ewing
Ryan founded AirlineGeeks.com back in February 2013 and has amassed considerable experience in the aviation sector. His work has been featured in several publications and news outlets, including CNN, WJLA, CNET, and Business Insider. During his time in the industry, he's worked in roles pertaining to airport operations and customer service while holding a B.S. in Air Transportation Management from Arizona State University along with pursuing a concurrent MBA and law program. Ryan has experience in several facets of the industry from behind the yoke of a Cessna 172 to interviewing airline industry executives. In addition to supporting AirlineGeeks, Ryan works full-time in the aviation industry.
Follow Ryan
Latest posts by Ryan Ewing (see all)
767777Airbusaircraftaircraft storageairlinesBoeingcoronavirusCOVID-19ExclusiveFeaturedMROStorage
Related Stories
[ Related Stories ]September 27, 2022 6:31 pm ET
By Parker Davis