Hong Kong International Airport has become the world’s first airport to trial a full-body disinfection channel to protect passengers and staff from COVID-19.

The facility, called CLeanTech, is an enclosed full-body disinfection facility that sanitizes travelers using the channel in 40 seconds, killing 99.9 percent of germs. Currently, CLeanTech is being designated for use by staff undertaking public health and quarantine duties at the airport in addition to those working with arriving passengers. 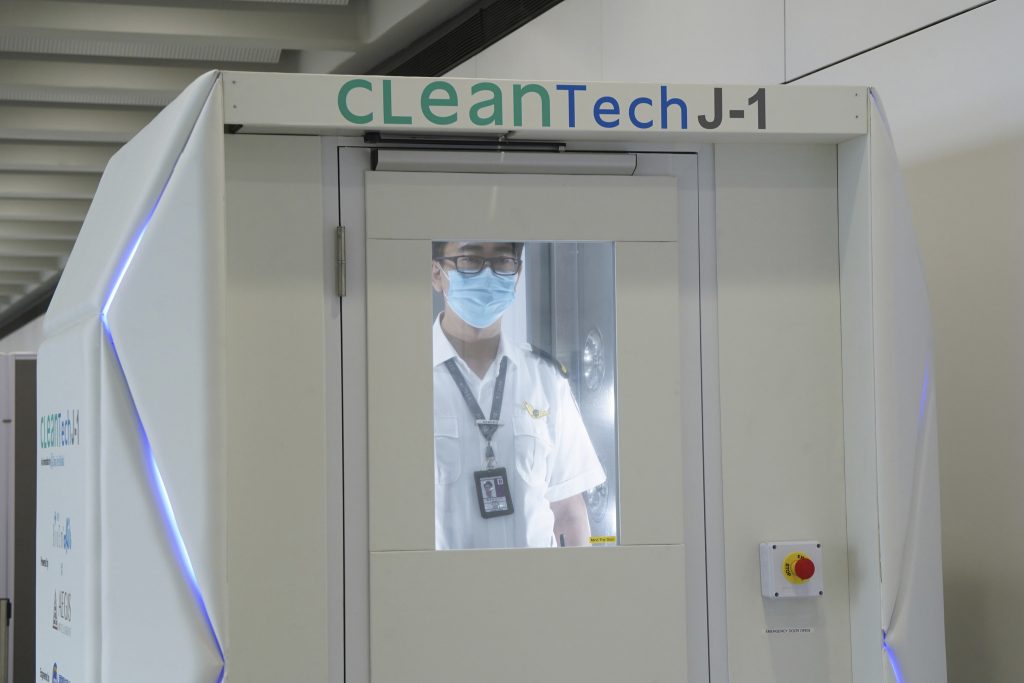 Those using the channel have their temperature checked before entering the facility, which has its interior surface equipped with an antimicrobial coating that kills viruses and bacteria on human bodies and clothing. Sanitizing spray is also used to disinfect those using the facility.

Cross-contamination between the outside environment in the terminal and the CLeanTech channel is avoided by keeping the channel under negative pressure, meaning air will rush into the compartment rather than out of it when its doors are opened. 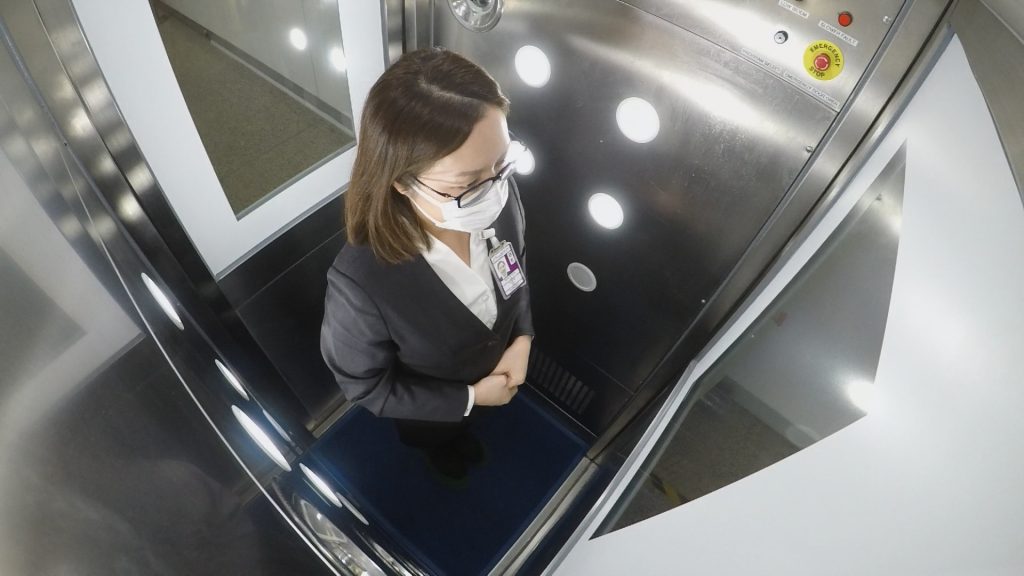 The CLeanTech facility’s internal surfaces are equipped with an antimicrobial coating to kill bacteria on the person using the channel. (Photo: Hong Kong Airport)

There are already some autonomous cleaning robots deployed at the airport, ensuring thorough disinfection of public areas. Called Intelligent Sterilisation Robots, they are equipped with an ultraviolet light sterilizer and an air sterilizer and operate at all times in public bathrooms and key operating areas in the terminal building. Up to 99.99 percent of bacteria in the robots’ vicinities can be killed in just ten minutes. 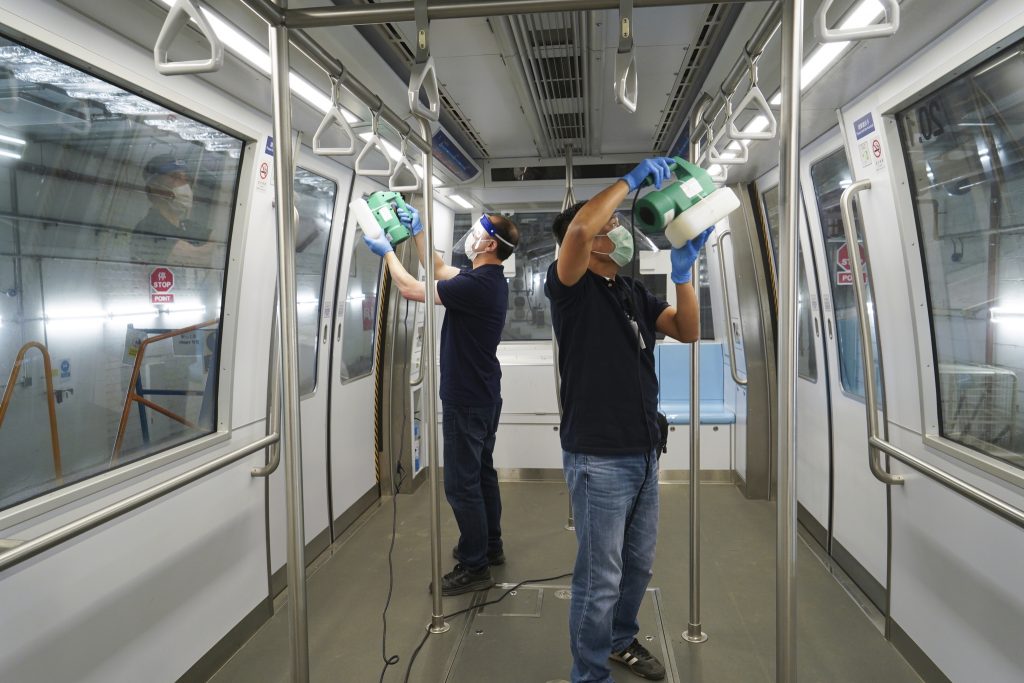 Staff apply an antimicrobial coating on an automated people mover to prevent bacteria from lingering. This is one of the many high use areas being sanitized in this way. (Photo: Hong Kong Airport)

“The safety and wellbeing of airport staff and passengers are always our first priority,” Hong Kong Airport Authority Deputy Director of Service Delivery Steven Yiu said in a press release. 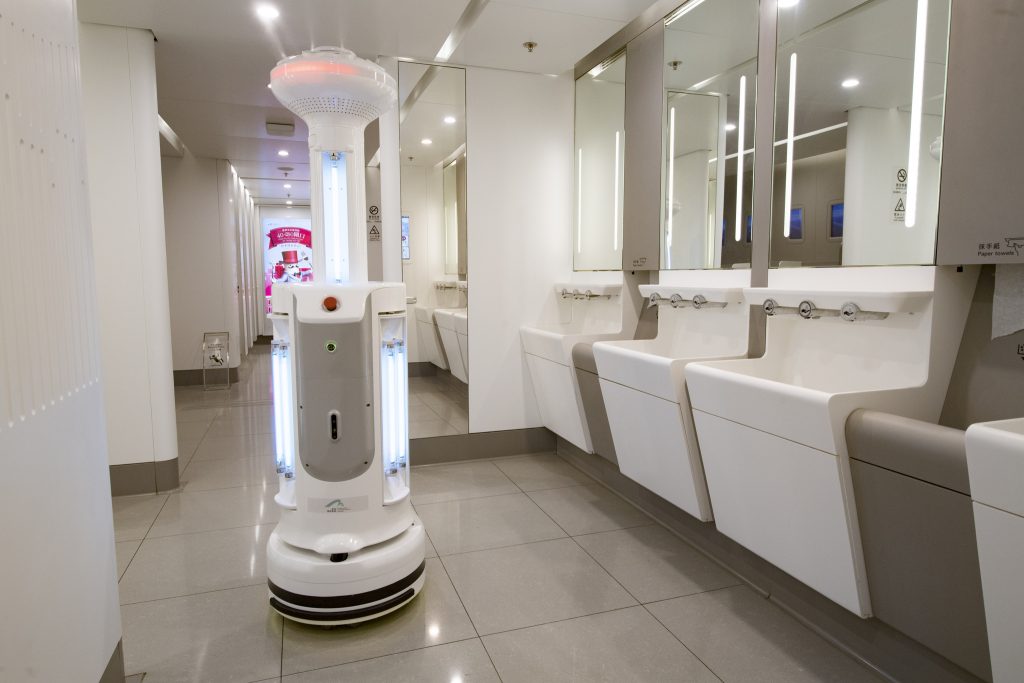 “Although air traffic has been impacted by the pandemic, the [airport authority] spares no effort in ensuring that the airport is a safe environment for all users. We will continue to look into new measures to enhance our cleaning and disinfection work,” Yiu added.