Boeing’s commercial airline customers have canceled a total of 462 Boeing 737 MAX orders since January 2020, meaning a 153% increase as of July compared to last year. The 737 MAX order book fell by 182 aircraft in 2019, substantially due to bankruptcy of Indian low-cost carrier Jet Airways, which had ordered 125 MAX aircraft. 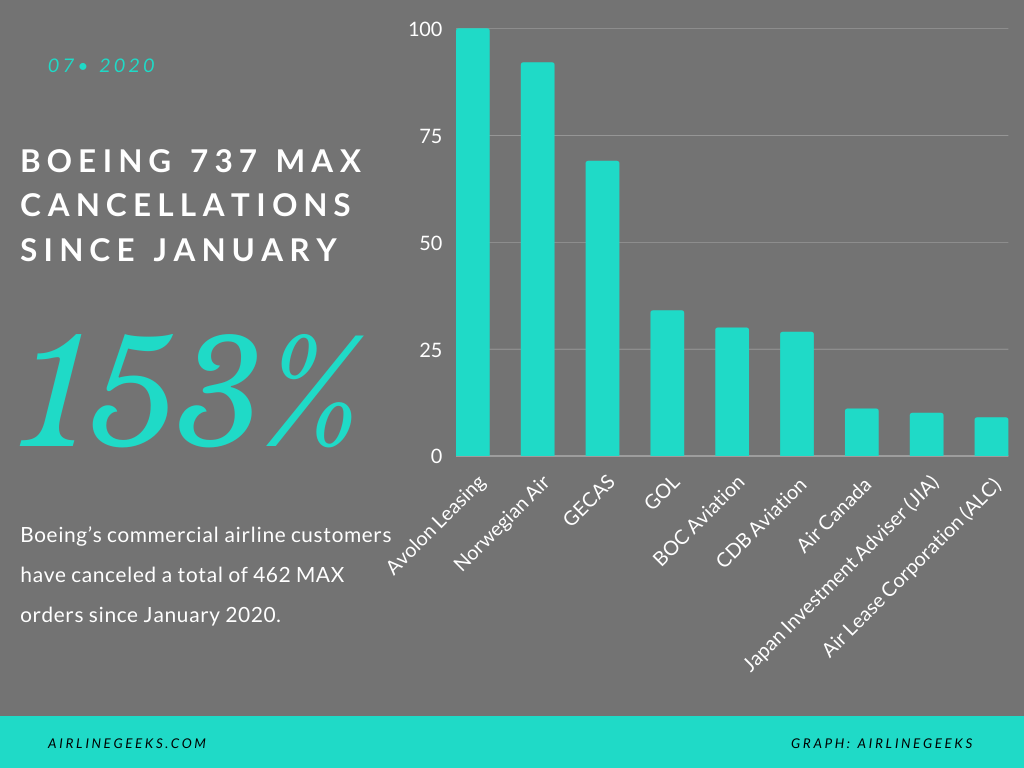 Boeing’s gloomy start to the year was a signal for the upcoming months. In March, the aircraft manufacture duopoly posted 150 MAX cancellations. Avolon, an aircraft leasing company based in Dublin, canceled 75 orders and Gol Transportes Aéreos, a Brazilian low-cost airline based in Rio de Janeiro, reported 34 cancelations.

One of the largest waves of cancelations came in June when Norwegian Air Shuttle sent a notification to the Boeing stating that the airline had terminated the purchase agreements of the remaining 92 Boeing 737 MAX. In addition to the cancellations, Norwegian has also filed a legal claim seeking the return of pre-delivery payments related to the aircraft and compensation for the company’s losses related to the grounding of the 737 MAX.

The snowball effect continued in July when aircraft lessor Avolon announced the cancellation of an additional 27 Boeing MAX planes, bringing net cancellations for the first seven months of the year to 462 planes as the industry and Boeing, alike, battle with the pandemic-related financial turmoil.

American Airlines also told Boeing on Friday that it would not take delivery of 17 Boeing 737 MAX aircraft unless the airline can secure financing to pay for orders.

Boeing might get the most severe blow from flyDubai, the United Arab Emirates-based low-cost carrier. The airline warned that it could replace MAX orders with aircraft from Airbus as the MAX groundings put financial pressure on the airline. The low-cost carrier is the second-largest MAX customer following Southwest Airlines, with 251 firm orders.

As the airline companies grapple with the fallout of pandemic, they give a wide berth to receiving new aircraft. Boeing might struggle with greater problems as MAX customers are able to withdraw from the contacts without penalty due to material adverse change clauses that give the MAX customers the right to walk away from the agreements.