A Qantas Boeing 747 in San Francisco. The airline is retiring its final two 747s this month. (Photo: AirlineGeeks | William Derrickson)

Qantas has bid farewell to its last Boeing 747-400 as it departed across the Pacific Ocean to Los Angeles before positioning to Mojave Airport, California as its final resting place.

The final flight has brought down the curtain on a five-decade partnership between Qantas and the Queen of the Skies, which saw Qantas become one of only a few airlines in the world that stuck with the 747 up to today.

Today we say goodbye to our final 747 VH-OEJ as it departs Sydney for the last time. #QF7474 will taxi past Shep’s Mound & receive a water canon salute, before taking off just after 2pm, completing a special lap of honour over Sydney & surrounds. Watch it live on @flightradar24

QF7474 was operated by VH-OEJ, a 17-year-old airframe that was delivered to Qantas in July 2003. “Wunala” took off at 3:28 p.m. from Sydney Airport and underwent a flyby of Sydney Harbour, the main city business district, as well as the north and east areas of the city.

After overflying HARS Museum where the first Qantas 747-400, VH-OJA, is preserved, the flight crew offered one last surprise but flying around the sky outlining the famous kangaroo that has been on the side of all its 747s for the past 50 years.

One of the unfortunate consequences of the coronavirus pandemic which has swept the world has been the abrupt removal of certain fleets from many carriers. Although Qantas was due to retire their 747-400s in the near future, the timing of the virus and the financial consequences have forced the airline to bring the retirement forward.

Speaking about the 747 and its impact on Qantas and Australia, Qantas CEO Alan Joyce said, “It’s hard to overstate the impact that the 747 had on aviation and a country as far away as Australia. It replaced the 707, which was a huge leap forward in itself but didn’t have the sheer size and scale to lower airfares the way the 747 did. That put international travel within reach of the average Australian and people jumped at the opportunity.”

“This aircraft was well ahead of its time and extremely capable. Engineers and cabin crew loved working on them and pilots loved flying them. So did passengers. They have carved out a very special place in aviation history and I know they’ll be greatly missed by a lot of people, including me,” Mr. Joyce continued.

According to Qantas, the airline has flown six different variants of the 747 thanks to the developments Boeing made to earlier models, which saw size, range and capability improve throughout the years.

Captain Sharelle Quinn, the first female captain for Qantas, will be in command of the 747’s final flight after flying the aircraft for 36 years.

“I have flown this aircraft for 36 years and it has been an absolute privilege,” Captain Quinn said.

“From the Pope to pop stars, our 747’s have carried over 250 million people safely to their destinations. Over the decades, it’s also swooped in on a number of occasions to save Aussies stranded far from home,” Captain Quinn added. 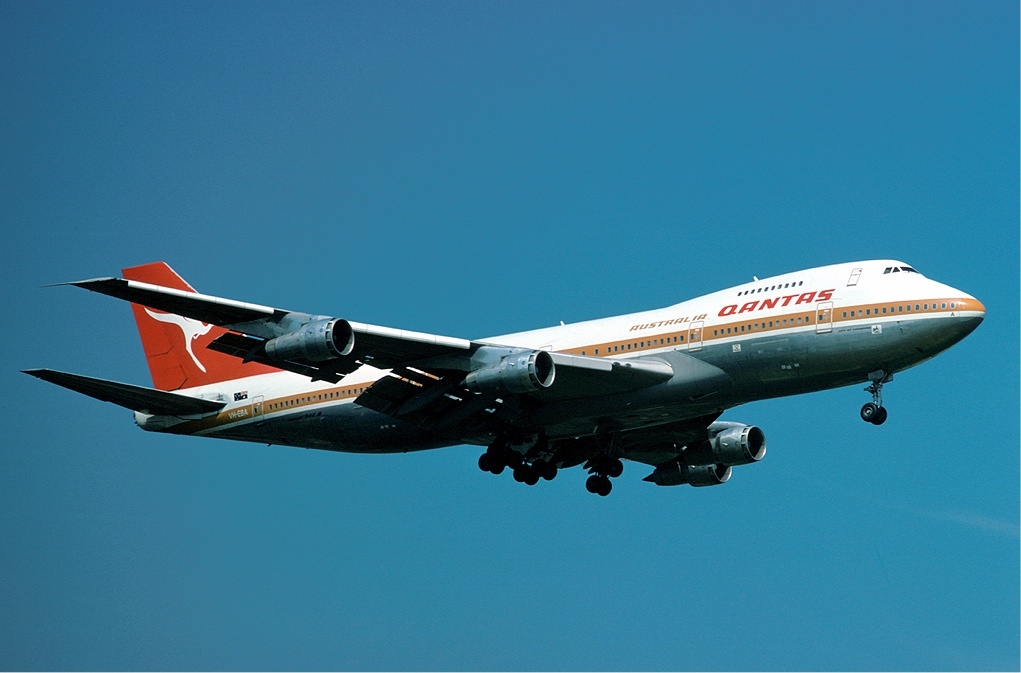 A Qantas Boeing 747-200 on final approach. By Eduard Marmet (https://creativecommons.org/licenses/by-sa/3.0) or GFDL 1.2 (http://www.gnu.org/licenses/old-licenses/fdl-1.2.html)], via Wikimedia Commons

In 1984, the introduction of the  747-SP saw Qantas hop over the Pacific Ocean non-stop for the first time. The arrival of the first -400 variant saw direct flights from Australian cities to the west coast of the U.S. and to European cities with one-stop, known as the kangaroo route.

Editors note: Update to include information since aircraft took off.