The master plan includes a brand new, eight gate terminal building situated in a different location from the airport’s current passenger terminal. The proposed location of the new terminal is the Brookley Aeroplex, which contains Airbus’ production lines for the A220 and A320 family of aircraft.

Speaking to al.com Chirs Curry, president of the Mobile Airport Authority, stated that the eight gate terminal will be smaller than the terminally currently operating at Mobile Regional Airport and will have room for expansion should the demand warrant it.

The release of the master plan comes after a multi-year study that examined the feasibility of moving services.

Mobile Regional Airport sits more than 10 miles from downtown Mobile and trips can take nearly half an hour. Mobile Downtown Airport is situated just four miles south of the city, off of Interstate 10, which runs directly through the city.

The change from Mobile Regional Airport would see the end of commercial service, however not the end of the airport. The U.S. Coast Guard operates the Coast Guard Aviation Training Center at the regional airport.

There has not been a date set for when the new terminal is expected to open. 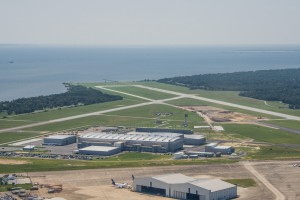 Currently, all commercial service to Mobile is operated at Mobile Regional Airport. The airport sees flights from Atlanta; Charlotte, N.C.; Dallas-Fort Worth and Hoston. Flights are generally operated by regional carriers for American Airlines, Delta Air Lines, and United Airlines.

There is no current commercial service at Mobile Downtown Airport, with Frontier being the last carrier to have served the airport. The airport also saw short-lived service from ViaAir in early 2019. During operations, flights were operated out of a temporary terminal that cost a mere $8 million to construct.

Frontier first began service in May 2019 with flights to Denver and Chicago’s O’Hare International Airport. In January of this year, Frontier announced that they would be pulling out of Mobile, again leaving the airport with no commercial flights. The Denver-based carrier reversed course just a few months later, commencing flights to Orlando International Airport in April. After operating just a couple of flights, the airline officially pulled out of the city in June, citing a lack of demand due to the COVID-19 pandemic.

The shift from Mobile Regional Airport to Mobile Downtown Airport should make travel to and from the airport more convenient for those living in and around the city. There are also hopes the shift will attract low-cost carriers, something the city has been lacking, minus the short stints by Frontier.

Attracting service from low-cost carriers would help drive average ticket prices down and attempt to stop the outflow of people driving to Gulfport, Miss. and Pensacola, Fla. While the drives to these airports are significantly longer for residents of Mobile, both offer a wider range of destinations and airline choices, including Southwest Airlines and Spirit Airlines.