Finding Pandemic Success In the Middle of the Amazon

This is Part I of a series discussing Brazilian aviation in the more remote regions of the country and how it has fared amidst the COVID-19 pandemic.

It’s a Friday morning at Eirunepé Airport, located in the state of Amazonas, Brazil, as a gathering form at the entry of the small terminal. The only regular flight of the day is arriving. Operated by MAP Linhas Aéreas on behalf of VoePass, flight 5935 originated from state capital Manaus with a stop in Tefé, on a trip that totaled three hours.

In most places on Earth, this would be an ordinary scene — if the world, and especially the country the airport is in, were not in the midst of a pandemic boosted by gatherings of people. 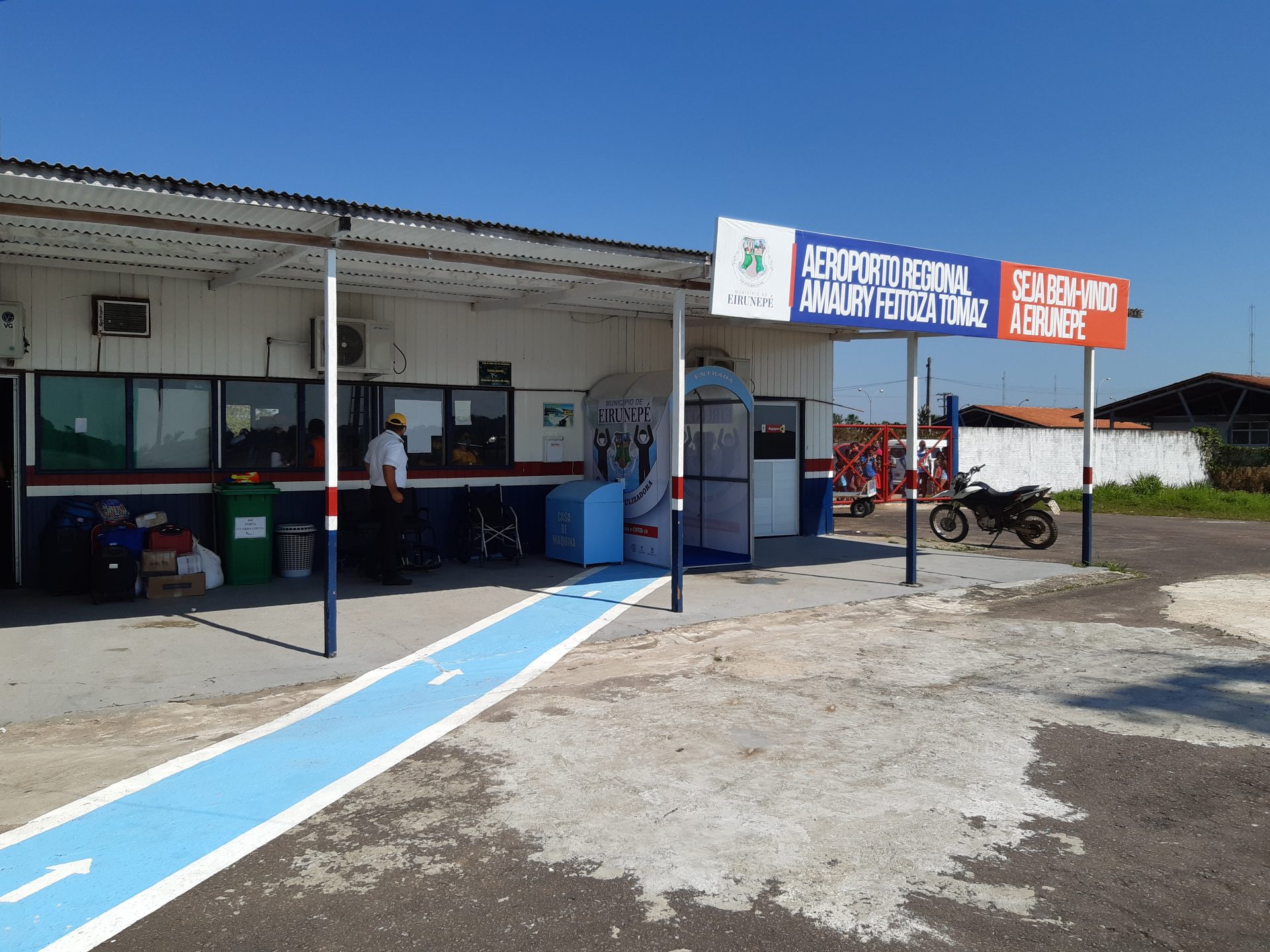 Besides a small number of curious passersby, however, most people there were either waiting for their family members or friends after a long period of closure in transportation within the state. By far one of the most affected by COVID-19 in the early stages of the epidemic, Amazonas had just started to resume its normal activities.

And even if in the entire country’s aviation industry is needed during the pandemic and especially during the economic reopening, it’s in a number of cities from this particular state — Amazonas — where the air industry plays a pivotal role.

To better understand the dynamics of commercial aviation in Amazonas, it is fundamental to observe the economic and geographic aspects of Brazil’s largest state.

With an area two times larger than Texas, Amazonas has the size of a large country. This does not translate, however, to economic development. The cities beyond the capital Manaus are mostly poor for a number of reasons, chief among them being their isolation.

Amazonas is inlaid in the deep Amazon Forest, which have made portions of the region difficult to access since the days of colonization. Therefore, most settlements to this day are situated upon the numerous rivers of the Amazon River basin — the largest river basin in the world — that covers the entire state. 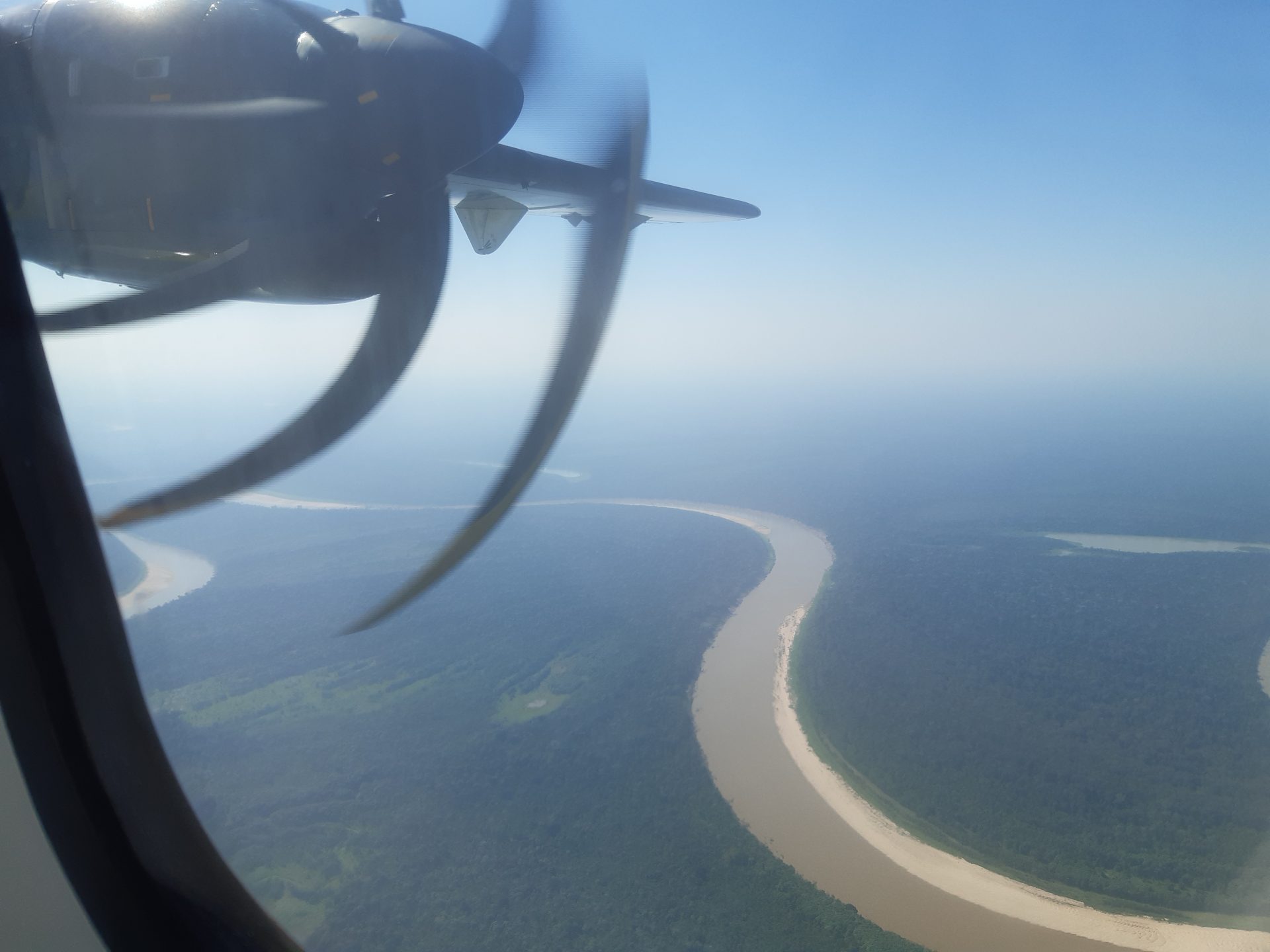 Flying over one of Amazonas’ countless rivers, which are basically the transportation network in the local inland. (Photo: AirlineGeeks | João Machado)

Given this isolation, there are basically no proper roads within the state. During the developmentalism years of the military dictatorship in the 1970s, three Federal Roads crossing the state were built. Of the parts that were completed, many are in poor condition. These roads, however, aim to connect state capitals, not the inner parts of the states.

So if one needs to go from Manaus to most of Amazonas’ inland cities, the most common transportation not only for passengers but also for cargo is the boat — and there are big companies in charge of this throughout the state.

The main issue with that, however, is clear: barges are slow, and distances are not always traveled in a straight line when it comes to the Amazon River and its tributaries. The Juruá River, where Eirunepé is embedded, is very sinuous. According to an article by NASA’s Earth Observatory, meanders make up to two-thirds of Juruá’s length. 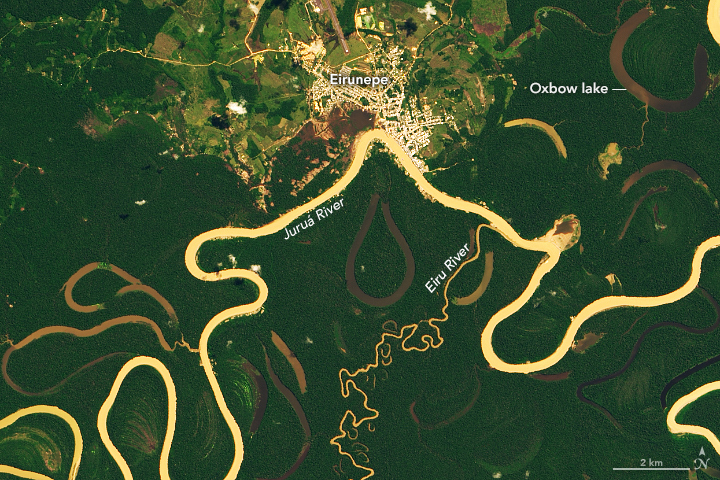 Amazonas’ State Institute of Sustainable Agricultural and Forestry Development says that, although the straight-line distance from Manaus to Eirunepé is only 1,245km, the actual distance by boat is of astonishing 3,448km. This translates into a 15-day trip when the rivers are full. Otherwise, the trip can take up to 20 days.

The airplane, therefore, may seem like a no-brainer for anyone who needs to go from Manaus to Eirunepé or vice-versa. In reality, it’s not, and this applies to the rest of the state’s cities as well. Amazonas is a very poor state. Additionally, crossing large distances in the Amazon efficiently is a chronic issue, especially given the amount of time a boat trip can take. Further still, the area’s remoteness inherently inflates costs of supplies like fuel, a brutal hit especially in a cost-sensitive industry like aviation. The combination of those two factors have led to a struggling industry in the region.

But if before COVID-19 hit, these flights were going strong for years, it means the regions are, indeed, worthy of an airline. The question is simple: considering all these negative factors, how do these flights exist at all?

To have a full picture of the reasons for the creation of air transport demand in Amazonas, it is important to consider the economic conditions of these cities. Given the difficulty of access, economic interactions between cities are very challenging, which makes it tough for economic growth to be induced.

According to the Brazilian Institute of Geography and Statistics (IBGE), Eirunepé ranks as the country’s 5,232nd city regarding the proportion of formal employment: in 2018, only 5% of the local population fell in this group. And of these workers, the average salary was only 1.5 times the minimum wage, which, adjusting by the IPCA inflation metric, would be a monthly salary of 1527.98 Brazilian real ($284.82).

It is safe to assume, additionally, that workers in the informal sector — which constitute the bulk of the economically active population in the city — have an even lower income.

Then How Is This Flight Commercially Viable?

Interestingly enough, this lack of economic development in Eirunepé may be what justifies this flight. Currently, the trip is operated three times a week with a stop in Tefé, halfway between origin and destination, with the ATR 72 — an aircraft which, given its size, cannot operate even in some airports in the richer southeastern Brazil.

The lack of opportunities in Eirunepé, coupled with the huge influence of Manaus over the town despite the distance, generates enough economic interaction to create demand. This is especially bolstered by the demand from people who move to Manaus in search of better economic prospects. With the GOL partnership, people who have moved to other parts of the country can also be served by the flight.

This is the famous VFR demand, an acronym for “Visiting Friends and Relatives.” Actually, this is the segment of demand response for the current uptick in air traffic in Brazil. In its last conference call with analysts, GOL CEO Paulo Kakinoff even claimed that the VFR demand has already reached pre-COVID-19 levels. What’s missing, though, is the corporate revenue — and in an area that’s less exposed to corporate traffic like Eirunepé, it is feasible to assume that the demand may be relatively healthy, especially after Amazonas cleared the worst phase of the pandemic.

This behavior by passengers is the case of Samira Xavier. A makeup artist from Eirunepé, she and her sister, pathology technician Dacila Lima, were making their yearly visit to their hometown to celebrate their parents’ birthday. For both, going by plane was a no-brainer.

“I moved to Manaus by boat. It’s horrible, horrible, the wait, the discomfort of traveling by night, sometimes we [would] stop and not travel every day,” Lima said. “Never again I want to go by boat. Only by plane. Let’s go by plane!” 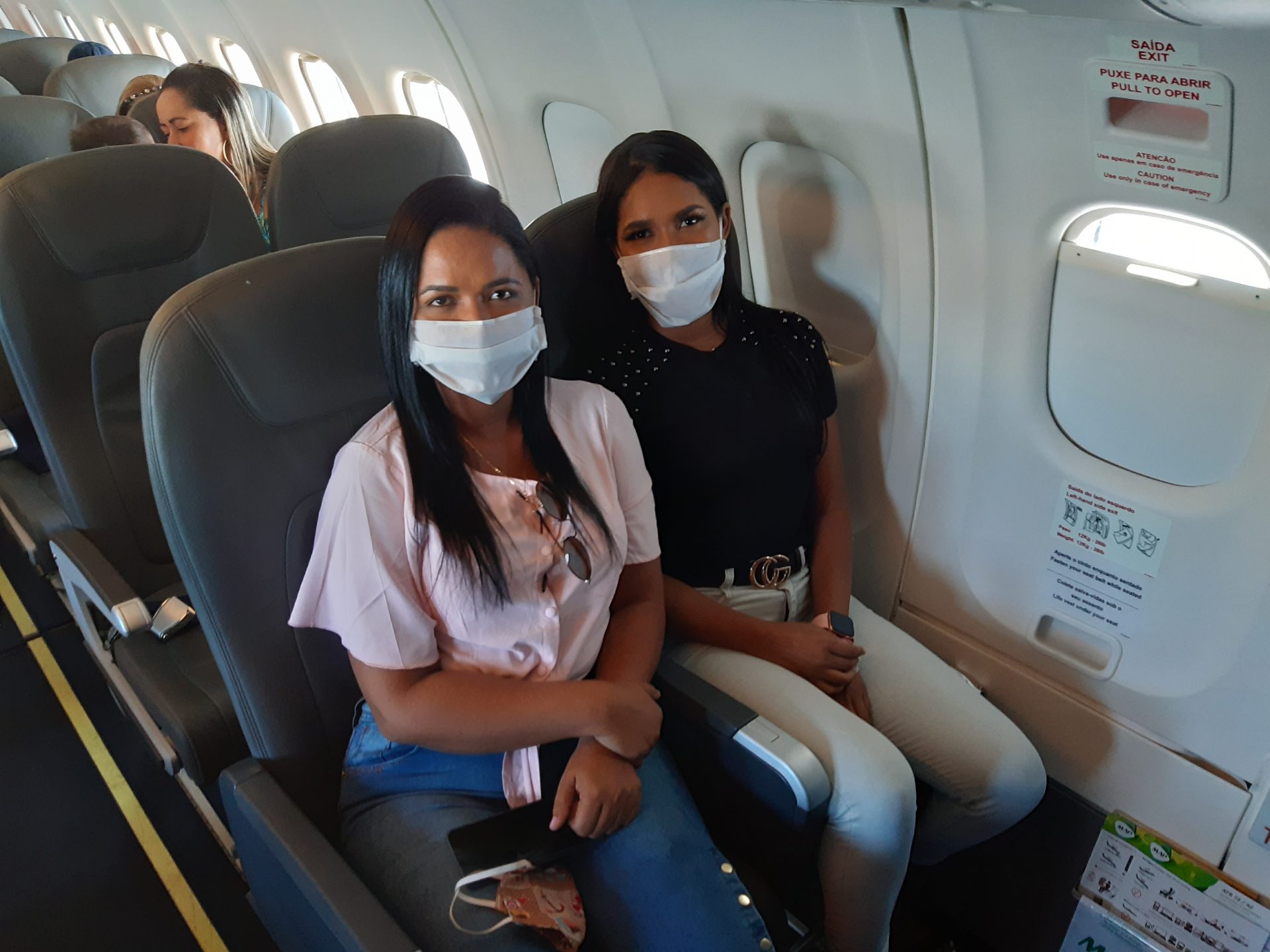 Samira Xavier and her sister, Dacila Lima, say that, for Eirunepé’s community, the airplane is a no-brainer when compared to the boat. (Photo: AirlineGeeks | João Machado)

“It wouldn’t be possible to spend this time with our parents [if it was by boat],” said Lima, who paid 700 reals for the one-way ticket, plus 100 reals for luggage. “The trip is too long.”

Even though they complain about the price of the air ticket, Xavier affirms that when you go by the river “you spend the vacations on the boat!” She added that she does “not regret [paying that much for the ticket]. I would pay this value a thousand times again, because it’s really convenient.”

Besides the VFR passengers component, Eirunepé’s isolation also creates a reasonable demand for cargo. Although most supplies that reach the city come in a much cheaper way by boat, usually from Manaus, more urgent shipments come by airplane. 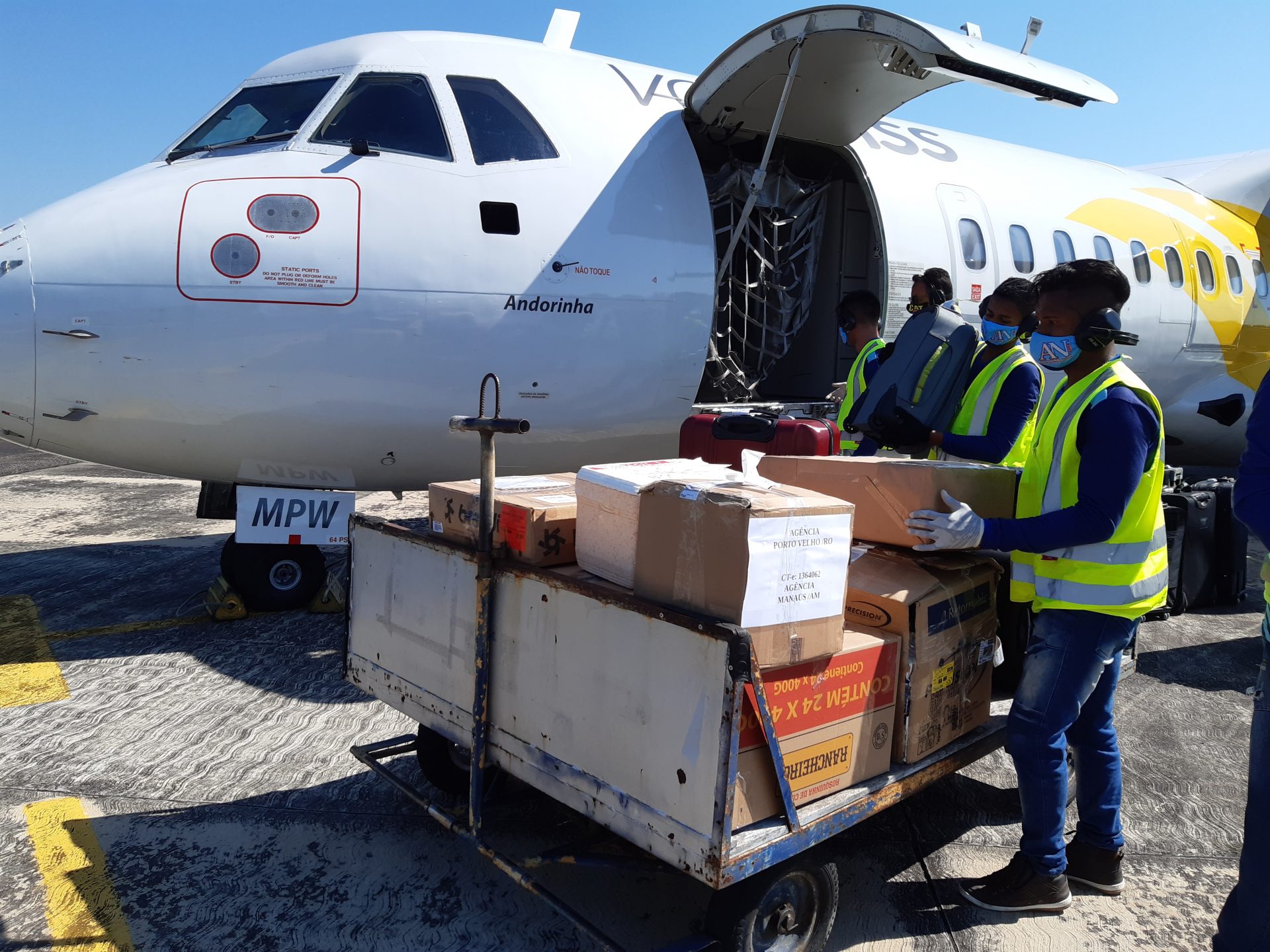 Another demand component created by this type of flight is the local air taxi business, which feeds the neighbor cities that lack air transport. A 2012 study by Amazonas Federal University’s Department of Geography Professor Tatiana Schor showed that there were four air taxi companies based in Eirunepé operating a total of eight aircraft.

“Eirunepé shows us an interesting reality of the Brazilian Amazon, especially with relation to its Western portion, that is the network of air transport fulfilled by small aircraft,” the article says.

According to the study, there are flights to cities like Envira and Ipixuna, in Amazonas, and Feijó and Rio Branco, in the neighboring state of Acre. These help transport merchants, doctors and bands of the popular forró and brega styles, in the “consolidation of an urban micro-network strongly based on air transport,” according to the article. 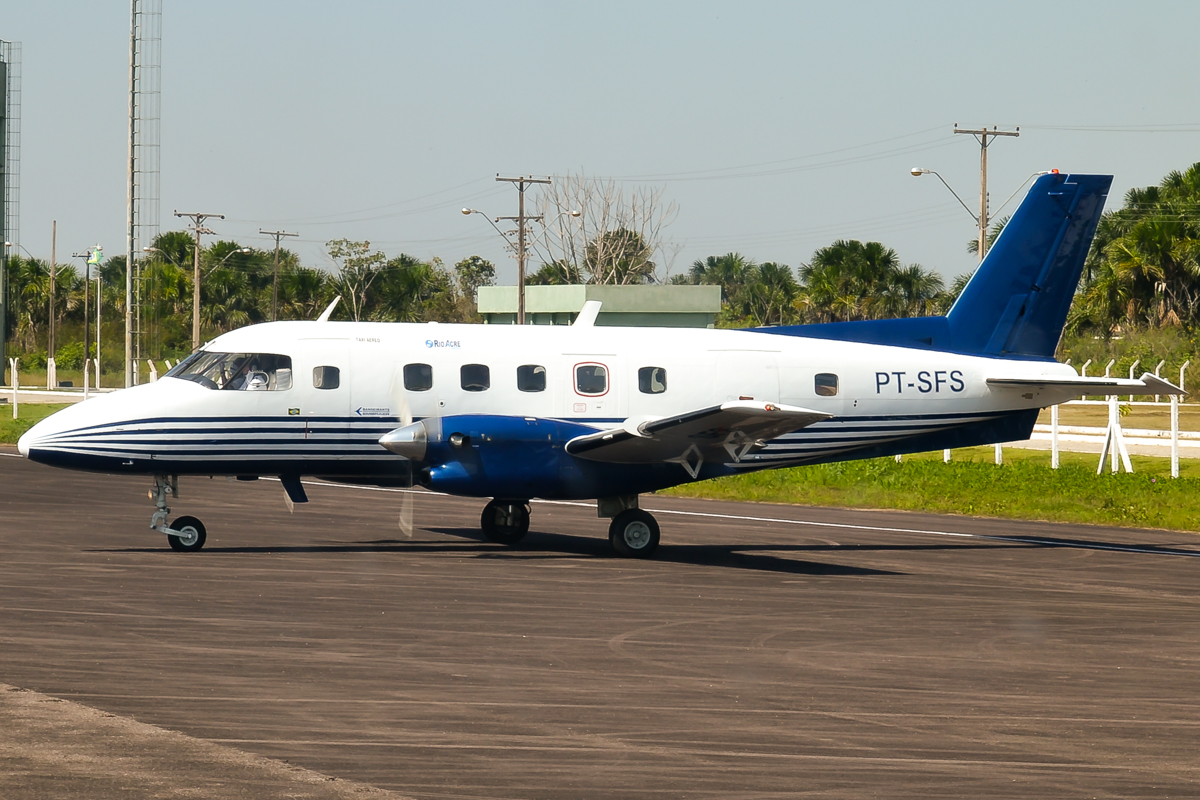 This Embraer 110 Bandeirante, operated by Rio Acre Aerotáxi, arrived in Eirunepé just before the ATR made its departure back to Manaus. (Photo: AirlineGeeks | João Machado)

That Friday morning, in the minutes immediately following the arrival the ATR in Eirunepé, two small aircraft also arrived in the airport: an Embraer Corisco and an Embraer Bandeirante, both operated by Rio Acre Aerotáxi.