As COVID-19 figures keep rising in Brazil, creating doubts over the continued improvement of domestic air traffic in the country, this Thursday Azul presented at its Campinas maintenance facility its seventh and newest Embraer 195-E2. In a partnership with Dutch paint company AkzoNobel and its Brazilian subsidiary Tintas Coral, the plane was labeled “South America’s most colorful aircraft.”

Registered PS-AEF, the livery is intended to portray Brazil’s diverse fauna and flora, with a special focus on the ararinha azul — known in English as, Spix’s macaw — a species that since 2000 is considered to be extinct in the wild. It supports project Ararinha na Natureza, which aims to preserve the species and reintroduce it in the wild in 2022.

The project between Azul, AkzoNobel and Tintas Coral, started in 2019, is named Por Um Céu Mais Azul” (for a bluer sky), and was entrusted to agency Dionisio.AG, which picked graffiti artist Pardal — sparrow, in Portuguese — to draw the livery. The aircraft depicts five Spix’s macaws and a sparrow. 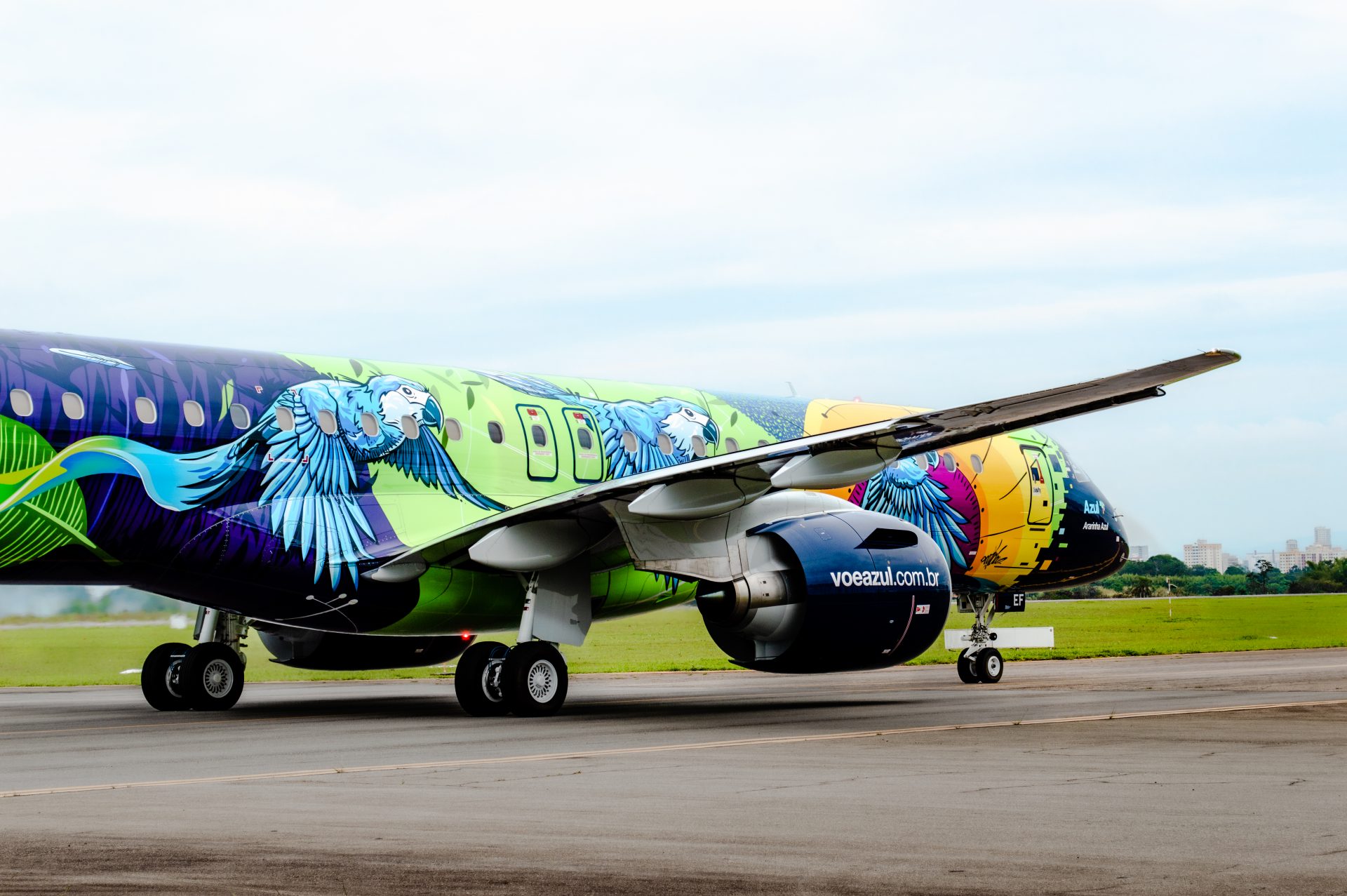 In a press release, Azul CEO John Rodgerson stated, “This is the most beautiful airplane I’ve seen in my entire life. It’s a pride for us to be able to fly this aircraft, that is the largest ever manufactured in Brazil and with the most complex and colorful paint of the country”, adding that “we will color Brazil’s skies with Ararinha and we’re sure that our customers are looking forward to know it and to enjoy the comfort of this beautiful plane.”

Azul says the aircraft has 58 different colors — 28 created by AkzoNobel exclusively for this project — taking three times the required timespan to be painted when in comparison to the airline’s regular colors.

“When Azul brought the livery proposal to us, we got really excited with the technical challenge, even more [by] taking such an important message, of preservation of the Brazilian fauna, to the entire world,” Embraer CEO and President Francisco Gomes Neto said. “The delivery to Azul of another E195-E2, that is the most efficient and sustainable of its category, is also important because it shows a recovery of aviation in Brazil. We are sure that regional aviation and the deployment of the right airplane size will be fundamental on the industry’s reconstruction.”

The E-Jets are the core of Azul’s fleet from the airline’s startup in 2008. The company currently has a commitment for 75 Embraer 195-E2, although in May, with the pandemic hitting the industry hard, 59 deliveries were postponed to 2024.

With 132 seats and a much lower cost per seat when compared to the first generation, the E195-E2 is Azul’s bet to efficiently serve markets where the Airbus A320neo, with 174 seats, or the A321neo, with 218, may be too large, or to increase frequency in trunk routes at times of the day with less demand.

PS-AEF entered Azul’s network on Dec. 1st and, up until now, according to FlightRadar24, it has only made rotations from Campinas, the airline’s fortress hub, to state capitals in Brazil: Belo Horizonte (Azul’s second-largest hub), Campo Grande, Curitiba, Goiânia and Maceió.