Japan Airlines and All Nippon Airways have made a habit of creating long term special liveries that span numerous years and numerous aircraft. For All Nippon Airways, the airline has consistently targeted studio work with liveries like Pokémon and Star Wars, which have continued to grace aircraft for years. Japan Airlines has been a little broader with Samurai Blue soccer liveries, DisneyLand Tokyo aircraft and the most recent sponsorship to come to and end: Arashi. As 2020 draws to a close, the airline will have to finally say goodbye to a sponsorship that lasted a decade.

As the airline was looking for a new way revitalize the Japanese market in the face of its own bankruptcy, Japan Airlines brought onboard local talent to try and bring some since of pride to an airline that was struggling to compete with competitor All Nippon Airways. In marketing strategy, the airline would attach itself to what were at the time key pieces of Japan media both domestically and internationally. The airline would create marketing work alongside identifiable figures like tennis player Kei Nishikori, manga series Doraemon, anime series K-On! and J-pop band Arashi.

At the time, the 10-year-old band was really starting to find its footing in the Japanese pop music scene. Arashi has been known as the most unified band in Japan, exciting both older generations and younger ones with its music. To attempt to create hype for the carrier, the airline created a deal on September 5, 2010, to produce a jet themed around the boyband. On top of that, the band would create a TV for the flag carrier based on their most current song at the time: “movin’ on”.

The airline would promote the band’s album onboard, with matching interior designs and through selling the band’s album as part of its buy-on-board offerings. To keep fans interested in the movement of the Arashi jet, tickets would not inform fans that they were on the jet until the day prior to the flight as a way to motivate those interested in flying the band-themed jet to fly JAL more often.

The band would not have to wait long to get a second livery, with the Arashi Million Jet appearing in the skies above Japan just a few months later. This jet, painted simiarly to the previous aircraft, would bear a phrase congratulating the band on reaching one million sales on the band’s ninth album, titled Boku no Miteiru Fūkei — The Scenery I’m Looking At. The airline opted to add the sticker to Boeing 777-246 JA8982, which primarily operated flights within mainland Japan. Unlike the previous aircraft, JA8982 would not feature a matching interior but the airline would offer most of the album in the seatback system for musical entertainment.

By 2011, the deal between the band and airline was starting to hit a groove. In 2011, a pair of Boeing 777-246s would take the title of JAL Arashi Jet as the airline was promoting the band’s 2011 album, Beautiful World. The livery would replace the previous ones, updated to a green sticker to match the new album. Similar to the original theme, matching interiors and entertainment would illustrate the plane’s association with the band. JAL Arashi Jet would take flight on July 24, 2011, just two weeks after the band released the Beautiful World album.

The paint scheme would once again be altered for 2012, this time promoting “Japan and Our Skies.” Similar to previous iterations, all 5 members of the band would be facing outward on a sticker applied to the rear fuselage of the aircraft with the words “Popcorn Arashi” appearing above their heads to promote the current tour and at the time most recent album. The airline would reduce the number of aircraft in the band’s theme from two to one, with Boeing 777-246 JA8972 bearing the new branding. Further reductions would see service return to the state of the Arashi Million Jet, with regular onboard service and no Arashi themed seat covers. But similar to old versions, Japan would no release the schedule for the plane until day before, but would provide fans with a seat layout to select which row would put them in line with their favorite singer on the outside sticker.

The livery would last through 2012, but the change of calendar year would not see Japan opt to continue the Arashi paint scheme line. The band and airline continued to work side by side for certain events, specifically the “Arashi Blast in Hawaii” event in 2014, and the group would continue to do marketing and advertising for the government-backed carrier. The airline’s domestic strength was growing as the airline was now well clear of Corporate Rehabilitation Law and back to turning a profit. Meanwhile Arashi continued its hot run of form, presenting the albums Love in 2013 and The Digitalian in 2014 to great acclaim.

Following a three-year livery hiatus, the band got their own personalized design in 2015 with singer Ohno Satoshi designing a Boeing 777-300 for the 2020 Olympics. In his design, Satoshi included thematic scenes of the homeland, including Mount Fuji, local flowers and insects and seasonal colors. The five members appeared on the lower part of the artwork longside the worlds “Fly, 2020.” The aircraft, JA751J, wore the design for roughly one year before receiving a smaller and more generic Olympics livery down the line.

As the band neared its 10th anniversary with the airline and 20th year touring as a band, Japan Airlines would once again announce a special livery for the band as the tour to Hawaii would result in a special Hawaiian themed paint scheme. The livery was the first time the band appeared on the Boeing 787-9, an aircraft that Japan Airlines was integrating into the Hawaiian market. Utilizing the entire length of the fuselage, the paint scheme featured all five of the band’s members wearing Hawaiian themed designs such as palm trees and the five members wearing flowery shirts. The livery was not copied across both sides, with the band appearing in taking different stances on either side of the plane. The airline announced the paint scheme with members Satoshi Ohno and Jun Matsumoto in attendance. 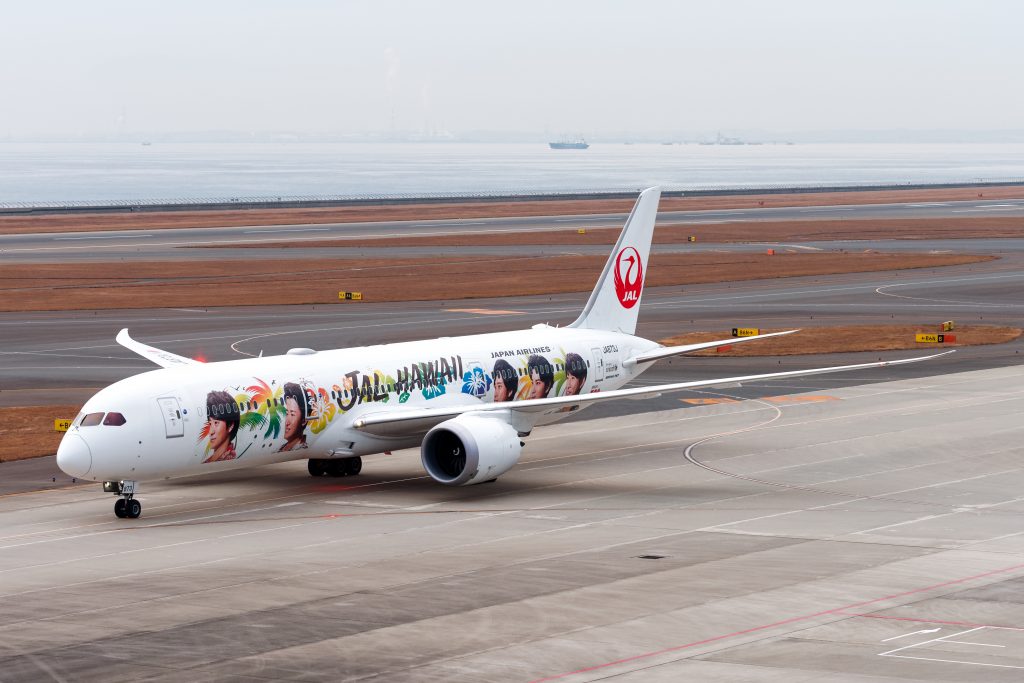 It was toward the back half of 2019 that the partnership would finally reveal a chapter to close on. Japan Airlines, alongside the rest of the world, would learn that the end of 2020 would be the end of boy band for the near future. After 20 years of touring, singing and creating countless albums, the group would go on hiatus to pursue personal goals.

To commemorate the band in its final year, Japan Airlines would release one final livery titled “2020 Thanks Arashi.” The livery would appear on the airline’s newest aircraft model, the Airbus A350, and would see most of its operations inside the island chain nation. The new paint scheme featured fuselage-running black and white headshots of the band with the phrase ‘Thanks Arashi’ appearing in the forward part of the livery.

Arashi would take part in promoting the Airbus A350 as the final namesake special livery would be worn across the flag carrier’s newest domestic aircraft. The band would appear in TV advertisements and marketing for the A350 as service ramped up for the airline.

The band’s 2020 plans have been unraveled by the COVID-19 as large venues have not held concerts and the closed borders prevented travel to some continents. Arashi had planned a small amount of global touring in their 2020 schedule, with this plan being abandoned when the pandemic unfolded in the spring. The band will not delay its suspension at the end of the year with a final appearance at the 62nd Annual Japan Records around New Year’s closing out their group operations for the foreseeable future.

The end of Arashi’s experience with Japan Airlines cements the bond between the two of them and helped provide the refreshed brand with a marketing strategy to cling to. Arashi has been the marketing campaign while the airline was in Corporate Rehabilitation Law and has stuck with Japan Airlines even as the airline was rebranded and began to solidify its position in the nation’s market for the decade later. Whether the band rejoins again in the future is yet to be seen and the airline has declined to comment on a potential replacement, but the decade long bond between band and airline has cemented itself in Japan Airlines history.