A Sun Country 737 on the taxiway. (Photo: AirlineGeeks | William Derrickson)

The U.S. Carriers Growing During the COVID-19 Pandemic

As airlines try to continue to find the right fleet size for a post-pandemic recovery, two airlines have taken a slightly different route. Allegiant Air and Sun Country Airlines are the only two passenger airlines in the United States that now have larger fleets than when the pandemic first started to take effect on March 1, 2020 per JetTip.

Sun Country has added 12 Boeing 737-800 Freighter aircraft to its fleet since March. The airline, which operated only passenger variants of the Boeing narrow-body, operates the freight aircraft for Amazon’s Prime Air as part of a contract signed in December 2019.

Sun Country was operating with a fleet of 32 Boeing 737s pre-COVID-19 with all but one being the -800 variant. The carrier returned two leased aircraft to Dutch airline Transavia but has had a net fleet growth of 10 aircraft in the 9 months since March.

Although Sun Country’s expansion has been in large thanks to the addition of cargo-only aircraft, Allegiant’s fleet expansion, while significantly smaller, has all been passenger-based. The airline has had a net fleet growth of two aircraft when compared with the week of March 1, 2020.

Allegiant’s active fleet now sits at 97 aircraft with a mix of Airbus A319 and A320 aircraft. Since March, the Las Vegas-based airline has received four used Airbus A320s from Cebu Pacific of the Philippines.

Like numerous other low-cost and ultra-low-cost carriers, Allegiant has remained aggressive throughout the pandemic even with the lack of travel demand. Along with the likes of Frontier Airlines and Spirit Airlines, the carrier focused on bringing passengers to leisure destinations, something that still has a slight demand. The airline also has large operating bases in Florida and Arizona, places that have seen high demand due to fewer COVID-related restrictions. 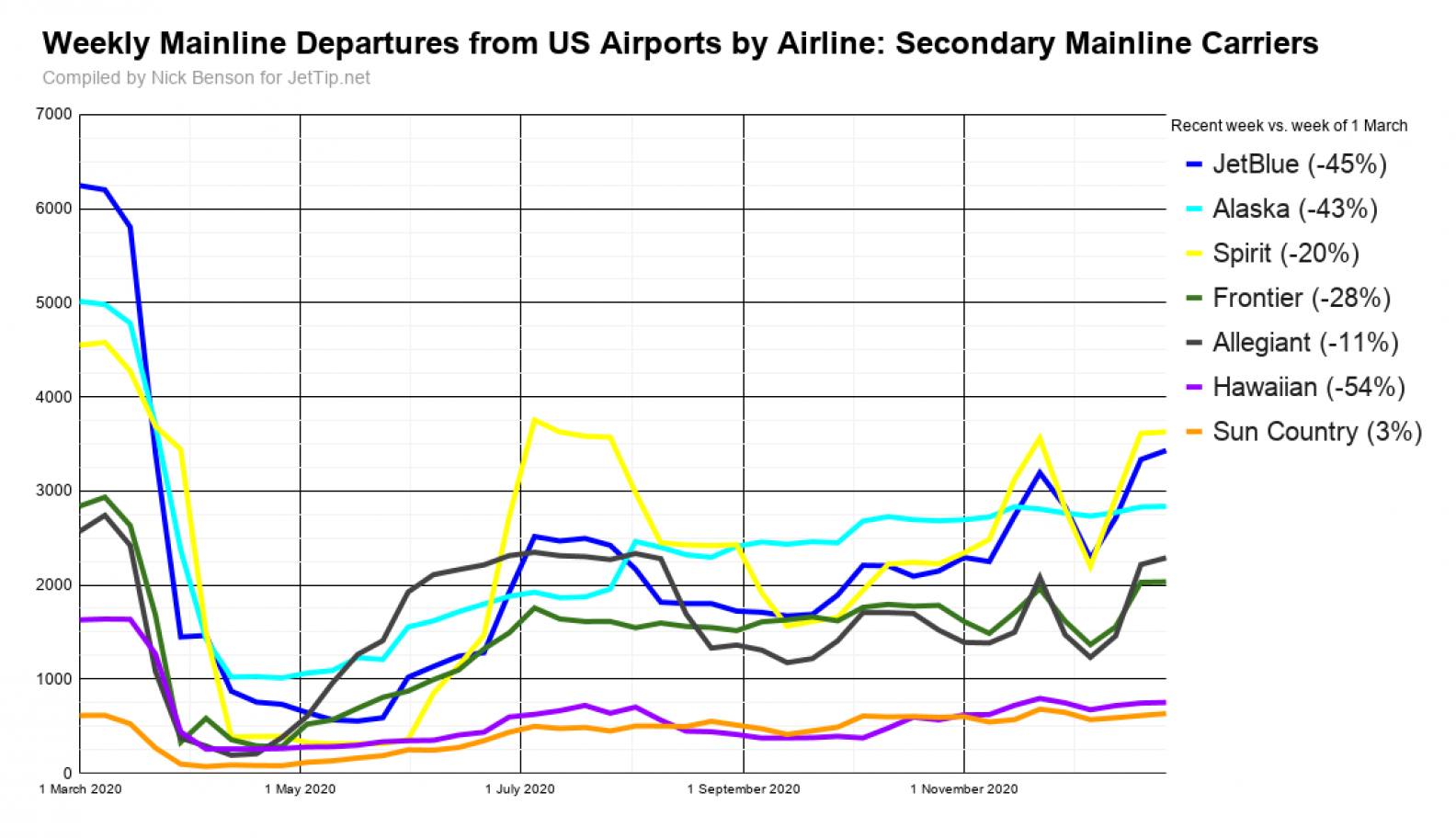 As seen in the graph above, airlines such as Alaska Airlines and JetBlue are operating over 40% fewer departures compared to the week of March 1, 2020. However, due to the nature of their expansions, both Sun Country and Allegiant have seen the least change in that time period. Due to their Prime Air contract, Sun Country has seen a 3% increase in departures while Allegiant is down only 11%.

While both of the carriers have had varying fleet numbers over the course of the pandemic at the time of writing, their active fleet counts sit above their pre-pandemic numbers. Airlines such as Delta Air Lines and American Airlines sit with much smaller fleet numbers due to the retirement of different types of aircraft over the past year.

Atlanta-based Delta Air Lines has made it through the pandemic without starting a single tag route. Other airlines such as United, American, Alaska, and others combined destinations into a single flight to save costs during the pandemic due to severely light passenger loads. SkyWest under the United Express banner combined…